A US Army soldier has sparked controversy after revealing his communist beliefs by sharing his support of Colin Kaepernick and the NFL protests online.

Second Lt. Spenser Rapone, 25, shared a photograph on Twitter this week that showed him dressed in his West Point Cadet Uniform with the words ‘communism will win’ written on the underside of his cap.

The photograph was taken in May 2016 at his graduation ceremony.

When he posted it online on Sunday, he wrote the hashtag #VeteransforKaepernick with it.

It was a nod to he current row between NFL players who have been condemned by President Trump for taking a knee during the National Anthem as a sign of protest.

Kaepernick, a former San Francisco 49ers who has earned an estimated $22million from his NFL career, started the trend last year when he refused to stand in protest against police brutality against black Americans.

Second Lt. Spenser Rapone shared this photograph on Twitter on Sunday under the hashtag #VeteransforKaepernick. It was taken during his May 2016 graduation from West Point and reveals his that he had ‘communism will win’ inside his cap

Many questioned whether it was genuine and assumed he was mocking the athlete.

To set them straight, he shared another photograph on Monday which showed him revealing a Che Guevara t-shirt beneath another uniform.

‘In case there was any lingering doubt, hasta la victoria siempre,’ he wrote, citing the slogan which is tied to Guevara’s legacy.

Kaepernick has never declared himself a communist. He was raised by a white Wisconsin couple who adopted him after birth and has earned a reported $22million from his NFL career.

Rapone was eager to share his solidarity with the 29-year-old’s protest.

Since the weekend, he has also retweeted the posts of other soldiers who have spoken out in support of Kaepernick and other athletes who have defied President Trump by taking a knee at sporting events across the country since he made the remarks last week.

Rapone is not the only veteran or serviceman or woman to share his view on the subject but his posts have landed him in hot water.

Because he was in uniform when he bore the pro-communist statements, he may be in breach of military laws which forbid political protests while serving.

Outraged Twitter users tagged West Point, the US Army Preparatory school in New York of which he is a graduate, in their responses to Rapone’s tweet. 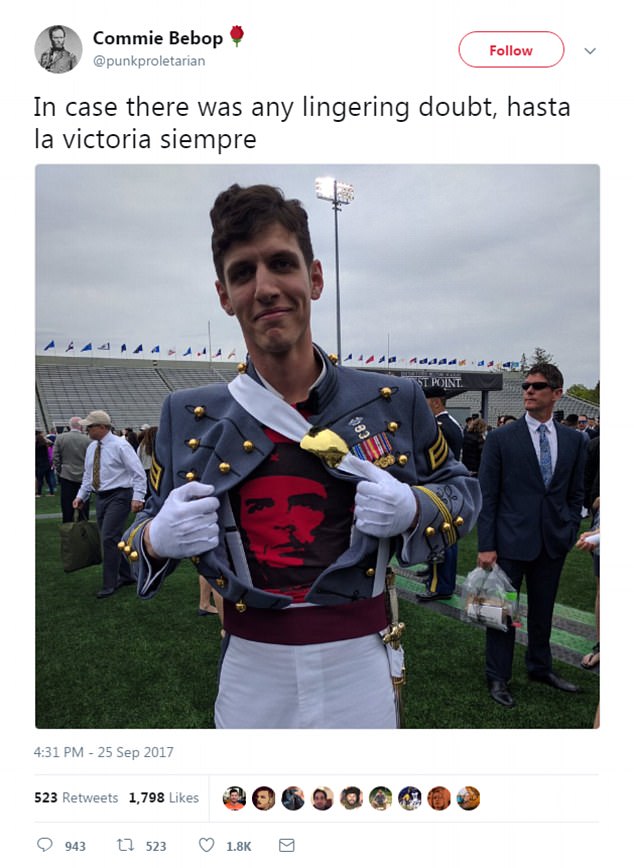 On Monday, he shared another photograph which showed him wearing a Che Guevara t-shirt beneath his West Point uniform in 2016. Army officials are now investigating the images which may prove Rapone breached army rules prohibiting soldiers from making political statements while in uniform

On Tuesday, the academy released a statement announcing it was looking in to the Rapone’s posts.

‘Second Lieutenant Rapone’s actions in no way reflect the values of the US Military Academy or the US Army.

‘As figures of public trust, members of the military must exhibit exemplary conduct and are prohibited from engaging in certain expressions of political speech in uniform.

‘Second Lieutenant Rapone’s chain of command is aware of his actions and is looking into the matter,’ it said.

The 10th Mountain Division, which he is assigned to, has not revealed how or if he had been disciplined.

‘The 10th Mountain Division not only supports free speech, it trains every day to ensure our nation has the ability to protect it at all cost,’ Lt. Col. Tonya Stokes said. 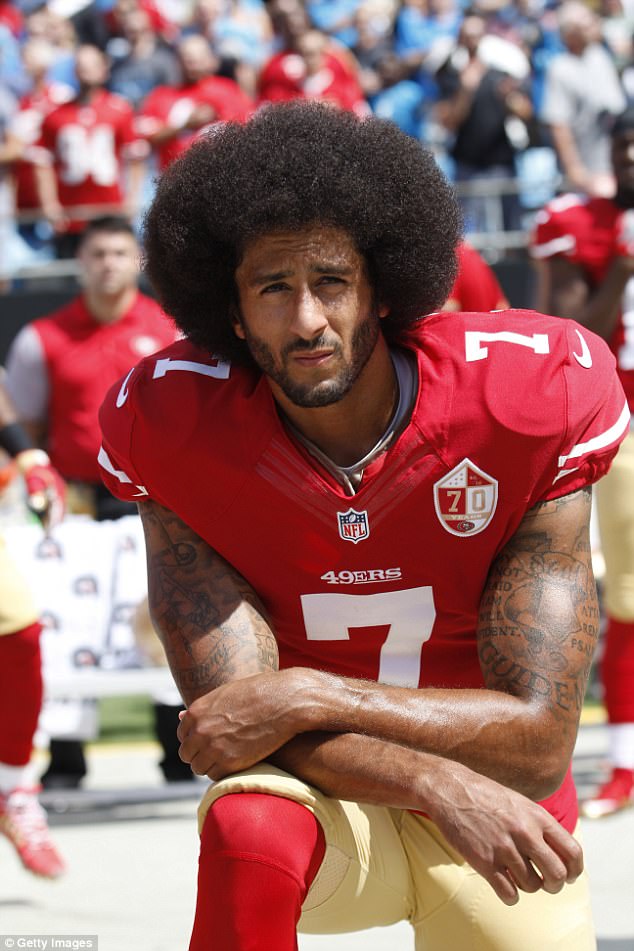 Colin Kaepernick sparked the trend last year when he took a knee during the National Anthem in protest against racism in America. He is pictured during one protest in September 2016

‘That being said, when our soldiers are in uniform, politics must be set aside. Our uniform represents every corner of our nation and it cannot be used to promote any single ideology,’ she added.

Twitter users were furious by the posts and responded by calling Rapone a ‘traitor’. Many demanded that he be removed from his post.

But the Democratic Socialists of America Veterans Working Group stood by him.

‘Let there be no doubt that we have unequivocal solidarity with and pride in Spenser.

‘He’s an exceptional soldier,’ it said in a tweet. 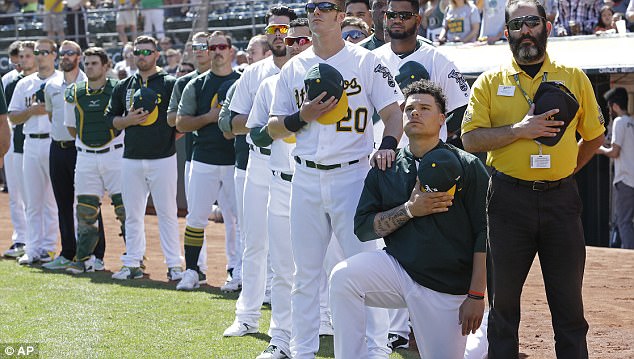 Since Trump’s remarks, the issue has transcended the NFL and swept across other sports. Above, Oakland Athletics baseball star Bruce Maxwell taking a knee on Sunday 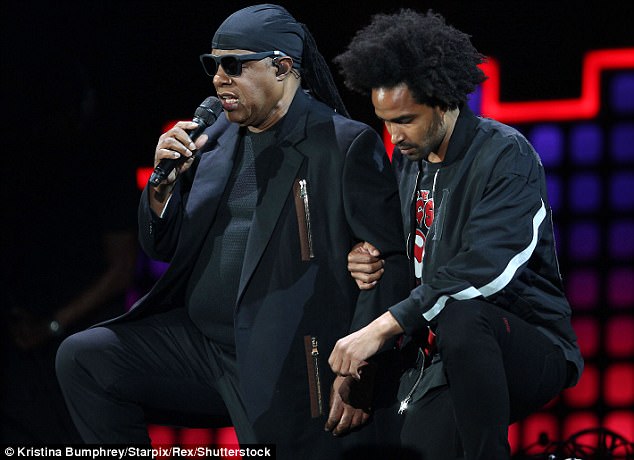 Stevie Wonder joined in the debate on Saturday, taking a knee at his concert in New York 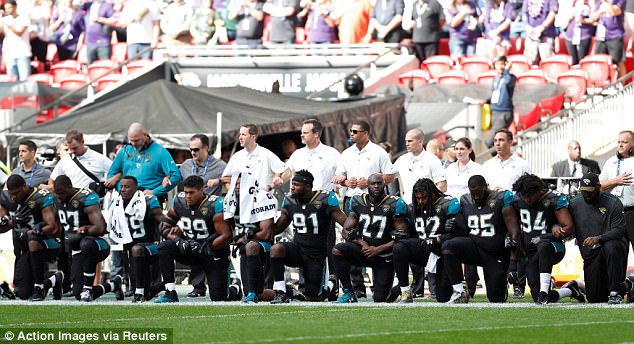 At a game in London on Sunday, the Jackson Jaguars and Baltimore Ravens all kneed or linked arms 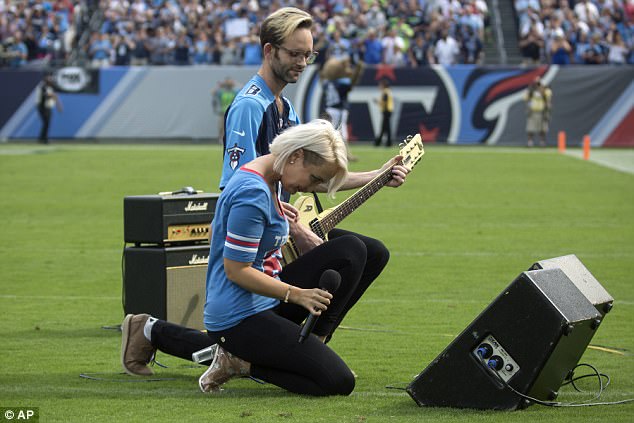 Before the beginning of the Tennessee Titans vs Seattle Seahawks game on Sunday, The Voice star Meghan Linsey took a knee in protest too

Kaepernick’s protest began last year when he first started remaining seated during the National Anthem and then dropped to one knee as it resounded through football stadiums.

Since he launched his protest in August 2016, others have followed suit in a unified protest against racism and the oppression of black people in America.

The issue reached new heights of controversy last week when President Trump told a crowd in Huntsville, Alabama, that the players involved ought to be fired for ‘disrespecting’ the country with their protest. 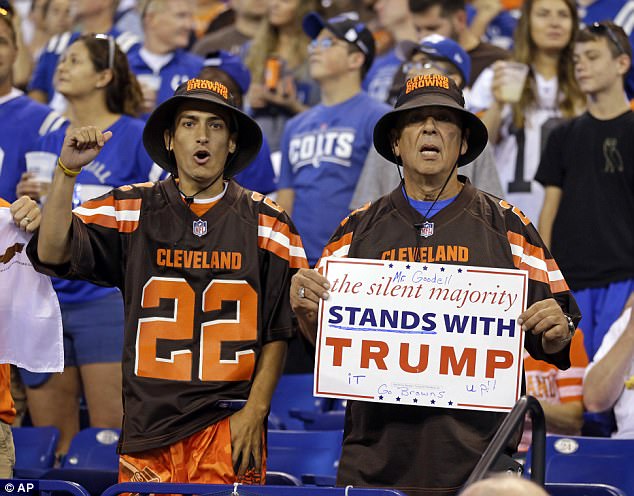 He said any such player was a ‘son of a b****’, winning cheers from the crowd but igniting a scorching feud with the NFL.

Since then, he has taken aim at NBA players and has asked Roger Goodell, the NFL commissioner, to take a stand with him.

Goodell refused has sided with the players. Since Trump’s remarks in Alabama, there have been protests at football games across the country.

Athletes in other sports have also taken a stand as have musicians and politicians who all say the president’s view infringes on the First Amendment and is unconstitutional.

There is, however, a huge number of people who have sided with Trump and view the athletes’ refusal to stand for the National Anthem as offensive.

Many burned NFL team flags and tore up tickets over the weekend after the president reignited the issue.