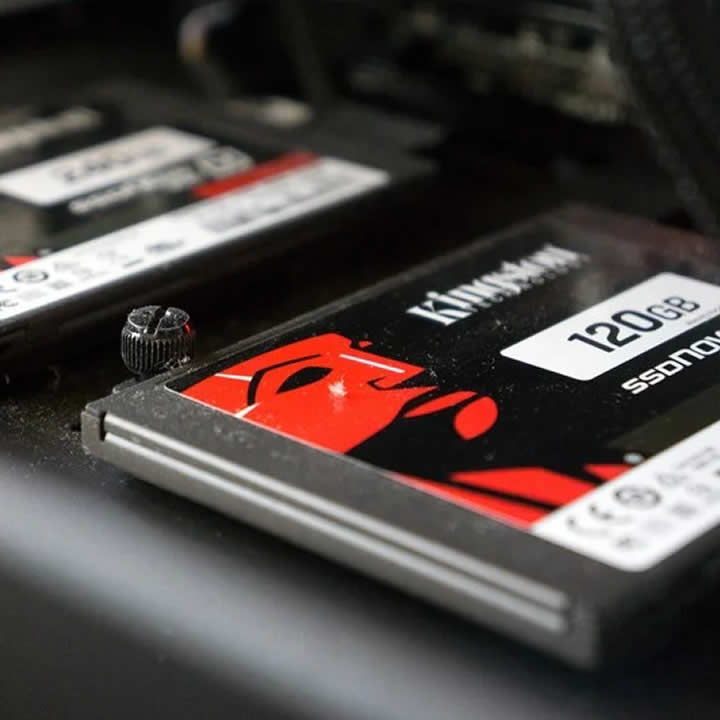 SSD is the most popular, fastest, and most energy-efficient way to store and exchange information. It has a faster read and writes speed than HDD disks while using less power. This is made possible by the absence of moving parts in the design of the device.

Boost the performance of your computer or laptop by replacing your old hard disk drive with a solid state drive. Ultra-fast flash solid-state drives are compact and easy to use.

SSD can be purchased at any hardware and electronics store. Each model has its own advantages and disadvantages, which determines the price of the device. Which SSD is right for you, you can decide by reading such parameters as the type of memory, resource, controller, volume, and others.

What is an SSD drive?

An SSD disk is a drive that is built into a computer and works with flash memory using microcircuits. It looks a bit like a standard hard drive, but there is a significant difference between the two. A conventional hard drive writes and reads data using a spinning magnetic disk and head. And in order to memorize the data, you need to magnetize and demagnetize the cells, and this takes a long time.

Fortunately, SSD drives have appeared that work with flash memory, which is much faster, but at the same time somewhat more expensive. Note that flash memory has a limit of rewrites, but companies are developing different ways of how to place cells to make the disk work for a long time. In order to figure out which SSD drive to choose for a laptop, you need to study each characteristic in more detail.

Which SSD is better and faster depends on the type of memory:

SLC (Single Level Cell) – the principle of operation is based on one cell, which is enabled or disabled. This type of memory is durable and allows you to quickly write and read information. SLC memory advantages:

The main disadvantage of this type of memory is its high cost and inaccessibility for the average user.

MLC (multi-level cell) – supports three to five thousand rewrites, is characterized by high durability, affordable price and high speed, due to which this type of memory is the most popular. Suitable for those who need high performance for games or other tasks. All in all, you get a lot of memory at an affordable price with a number of advantages:

The only drawback is that it is less reliable than SLC memory.

TLC (three-level cell) – supports about three to five thousand cycles and is often used in budget SSD drives, since it has a low speed. This type of memory is not used for commercial or industrial purposes but is intended exclusively for consumers. A good option for those who do not count on an expensive purchase. TLC advantages:

The disadvantages include low speed compared to MLC and SLC. TLC wears out quickly, but if you have an old computer or laptop at home, then it should be fine.

V- or 3D-NAND is a super-fast type of memory from Samsung that has many rewriting cycles and is installed in the company’s premium models. This is a special type where cells are stacked vertically instead of horizontally. The main advantage is simply the huge amount of memory. So, Samsung was able to release a 4 TB SSD.

To summarize, the speed of an SSD disk depends on the type of memory, but the volume is also important.

This parameter is individual and depends on your needs. You yourself must understand why you are buying an SSD drive and what you will do on your computer. Disk storage options:

Popular manufacturers of SSD drives include Intel, Kingston, Samsung, Sand Force, Marvel and others. Buy a storage disk with a reserve of capacity, and not end-to-end. Often, buyers do not have enough of the selected volume, so it’s better to take with a margin. It is inconvenient to use an SSD disk for ordinary data storage, for this it is better to buy a 1-4 TB HDD.

Ways to connect an SSD drive

To connect an SSD drive, you can use one of the interfaces:

The SSD disk controller is a device responsible for the clear and precise operation of each memory cell. An important parameter that determines how high-quality the SSD will work. Choose a trusted and trusted manufacturer:

The processing speed of the SSD drive depends on this parameter. For inexpensive drives, the optimal figure is 480-600 MB / s. In more expensive models, the read and write speed should be above 1,500 MB / s. Most SSD drives read information faster than they write. When the cache is full, the speed may decrease, but in any case, even an inexpensive SSD drive works at least three times faster than an HDD.

The main vector for the development of SSD drives is miniaturization. Every year they are getting smaller and this is due to the needs of the user. You can buy an SSD for a computer with a diagonal of 3.5 inches, but for a laptop, it will be a bit too much, so you should take a closer look at options with a diagonal of 2.5 or even 1.8 inches. Among the most popular form factors are mSATA and M2. These are cards for SATA and PCI-E ports. The width of such a disc is only 12 mm, and the length is from 16 to 110 mm.

The flash memory used in SSDs has a limit on the amount of information recorded. After this limit expires, the worn-out memory remains read-only: data is stored, but writing is blocked. The writing resource in the SSD is called TBW – total bytes are written. It is indicated in terabytes, which can be guaranteed to be written to the drive before it locks. For example, for the popular 480 GB budget SSD Kingston SUV500, the TBW parameter is 200 TB. This means about 416 complete overwrites of the entire drive memory. If it is used as a disk for the operating system, then no more than 10 GB of information is recorded on it per day. With this load, the SSD will last more than a century.

As a rule, the manufacturer indicates the service life of an SSD drive in hours or terabytes. We mentioned above that this indicator depends on the selected type of memory. MLCs will last less than SLCs, but longer than TLCs. A consumer SSD will run in the range of 700TB to 1PB. Let’s clarify: 1 ​​PB is 15384 GTA V installations.

We hope you already know what an SSD is and how to choose an SSD. We talked about the most important, and everything else is secondary characteristics.

8 reasons why you should use an SSD