An adventurous traveller has visited 15 countries in the past two years, and saved £20,000, by house swapping her Parisian apartment.

Inspired by the hit rom-com The Holiday, which sees Kate Winslet and Cameron Diaz swap houses, Habiba Ben Othman, 34, decided to swap her flat for adventure.

Initially, she swapped just with people from the south of France, but then she swapped globally – travelling to the UK, Hungary, Italy, Sweden and Brazil.

Having stayed in 20 properties in the last two years, Habiba says home-swapping has changed her life and she will continue swapping her flat until she’s seen the world.

Habiba in Rio de Janeiro in April 2021. The 34-year-old says house-swapping has changed her life and she will never stop Habiba visiting the Pantheon in Rome during one of her house-swaps, many of which have been in Europe 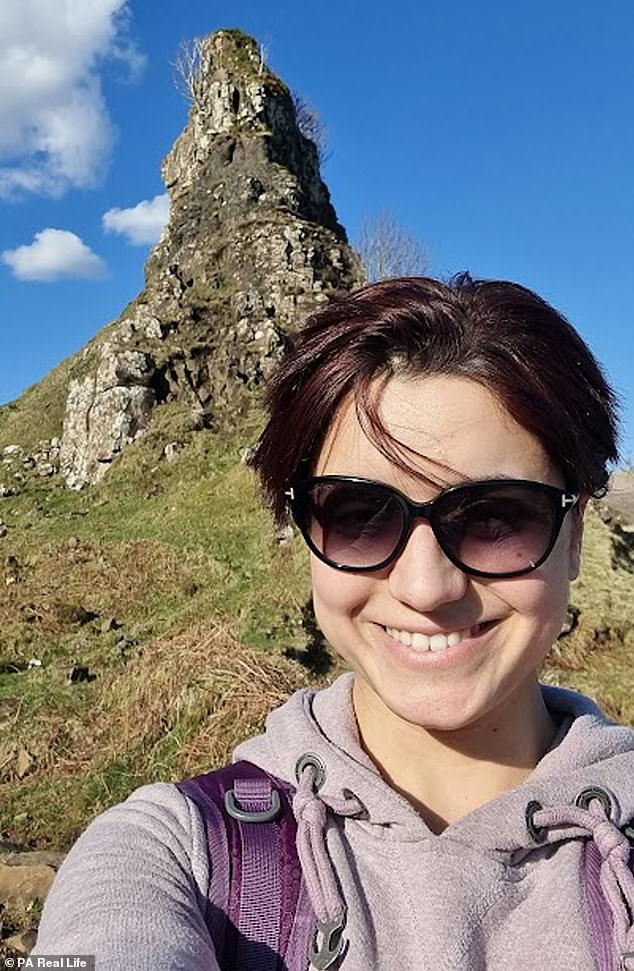 Habiba’s one-bed flat in Paris that she house-swaps with. The fact she is in such a vibrant city that people want to visit helps her being able to home-swap

Habiba, a consultancy manager, said: ‘My bucket list is to travel everywhere, which is exactly what I’m now doing.

‘Home swapping has changed my life because now travel is now a huge part of it.

Habiba’s first introduction into house-swapping was as a teenager watching The Holiday one Christmas.

But it was only after re-watching the film during a Covid lockdown in 2020, that Habiba felt inspired to home-swap and solo-travel.

Finding the website, Love Home Swap, Habiba decided to bite the bullet in July 2020, travelling to the south of France in her first swaps.

She said: ‘My first few homes were cottages and luxury properties in the south of France, which were absolutely amazing.

‘The website was full of like-minded people who were really easy-going and welcoming, so I did the same and started accepting people to mine too.’

Then, in August 2020, Habiba travelled to the UK, to live in homes across England, Scotland and Ireland.

She said: ‘I started with London and then Edinburgh and then travelled more around Scotland. 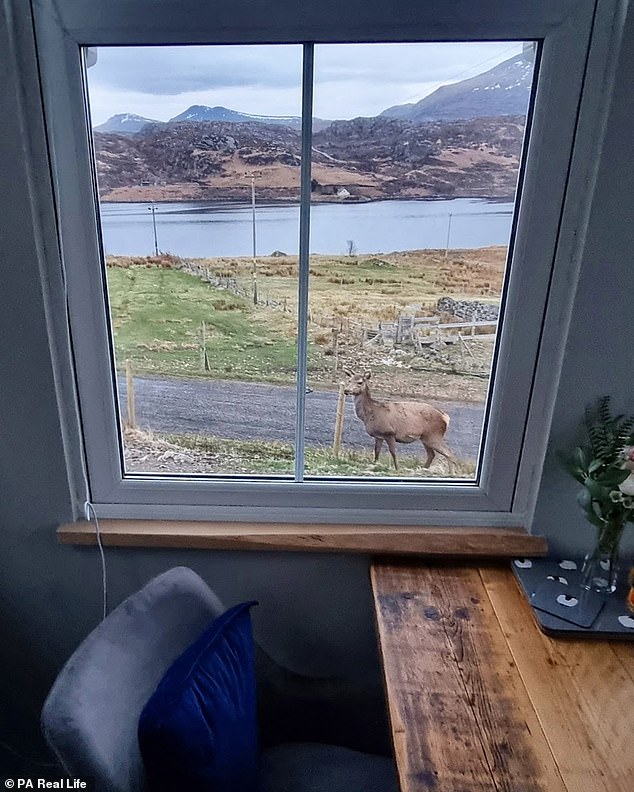 Room with a view: Habiba got to enjoy time gazing at this beautiful stag on her trip to a Scottish cottage

Bath was another city Habiba visited in March 2020. She credits the home-swap scheme to helping her feel more part of the city where she visits The 34-year-old marketing executive from Paris has had many new experiences, including seeing this owl in York

‘One of my favourite adventures was last April, when I went on a road trip around the north coast of Scotland in a rented car.

‘I also stayed in a wooden cottage in the Highlands, that was like something out of a fairy-tale.

‘There were deer passing the window and by night I could hear the owls as I sat by the fireplace. I felt like I was actually in The Holiday.’

She added that she has enjoyed travelling solo, just like the characters in The Holiday.

She said: ‘I remember watching it and thinking it was so romantic and adventurous and the two main characters were women who travelled alone, just like me.

‘I do like travelling with friends, but I prefer to travel alone because it is easier to plan and budget and I’m really lucky my work is very flexible so I can work wherever I want.’

Travelling solo – and living in someone’s home and not a hotel – also opens up different experiences, she says. The French capital and Habiba’s hometown of Paris – not a bad place to visit, especially via a home-swap scheme

Habiba has lived in over 20 different homes across 15 different countries over the last two years, saying it has changed her life

Last summer she visited Stockholm in Sweden, known for its iconic city hall, the world’s first open-air museum and the Abba museum

Habiba has also used the scheme to enjoy Rome (pictured here in 2021), a city known for it is Colosseum, the Roman Forum and its sprawling metropolis of Classical architecture

A home is Rome: The scheme means locals swap their homes to stay elsewhere – enabling people to stay in homely accommodation like this rather than hotels

Nice view: She has managed to cities and countryside alike, pictured here in the Swiss Alps in 2019

She said: ‘When I travel, I like to live like a local and really immerse myself into the local life and get the real experience.

‘Plus, house swapping is more comfortable and you get a real home with character and decoration and a kitchen and TV you just wouldn’t get with a hotel.’

Another benefit of home-swapping is that it is easier to make friends, Habiba has found.

She said: ‘I love getting to meet new people wherever I go.

‘One time, I swapped homes with a girl in Rome and she took me out to dinner to meet all her friends and that was amazing – they were so warm and welcoming.

‘She is coming to my place for Christmas this year, which is lovely.’

Habiba has now travelled around the world, including Hungary, Italy, Sweden and Brazil. 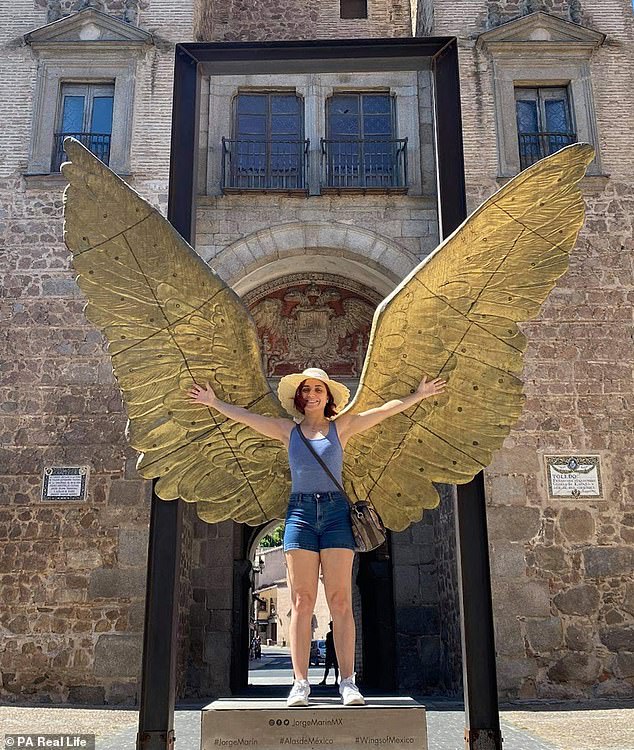 She also travelled to Mexico, pictured here enjoying the Wings of Mexico in the bright sunshine

Making the most of life: The 34-year-old is encouraging other people to also travel more (pictured in the Amazon jungle in April 2021)

And she says one of her favourite stops was Stockholm, Sweden.

‘It was magical there – the city was so vibrant and welcoming,’ she said.

‘Throughout the summer they had different festivals so every night there would be music in the streets and new people to meet and history to learn.’

As well as having adventure, Habiba – who is single and currently house-swapping in Malta – estimates she has saved around saying £20,000 on hotel fees.

She said: ‘I used to use hotels or Airbnb or bed and breakfasts, depending on what I could afford.

‘If you want to get a nice hotel or Airbnb nearby the town, then you can end up spending a lot.’

Habiba said: ‘If you swap your home with the owners of the one you are visiting, it is completely free.

‘But even if you go somewhere you are not simultaneously swapping with, you only pay an £80 fixed fee – which would be for a whole 10-day stay, for example.

‘I have basically saved between five and 10k each year by house swapping, rather than using hotels or Airbnb.’

Habiba is already planning her next house swap for Christmas.

‘I have lots of friends in the UK now, so I will be going to London for Christmas and new year – and then for Hogmanay, I will be in Edinburgh, which will be really exciting,’ she said.

And hopes to encourage other women to take the plunge too.

‘I really want to advise other women to step out of their comfort zone and give it a go,’ she said.

‘Start with a short trip and you will quickly discover it is so, so worth it.’