‘We’ve got to stick together’: Ole Gunnar Solskjaer hits out after Manchester United fans chant vile abuse at the Glazers and Ed Woodward

Ole Gunnar Solskjaer was forced to defend his Manchester United bosses after loud protests at Old Trafford during the club’s 4-0 victory against Norwich.

United’s first win of 2020 was overshadowed by large sections of the crowd chanting ‘We want Glazers Out’ against the club owners during the second half, while there was a more isolated rendition against executive vice-chairman Ed Woodward, with a distasteful line about him being put on a bonfire.

A significant section of United’s support blame the Glazers for overseeing the club’s declining fortunes since Sir Alex Ferguson retired in 2013. They have not won the Premier League since and currently sit five points outside the Champions League spots.

The Glazers take an annual dividend from the club, the latest being £8million, while Woodward is the highest-paid club director in the top flight, with a £3.16m annual salary.

Solskjaer admitted hearing the chanting, started at the Stretford End but echoed by thousands of others in other parts of the ground, after United had established a winning margin so fans could not be accused of distracting the players. 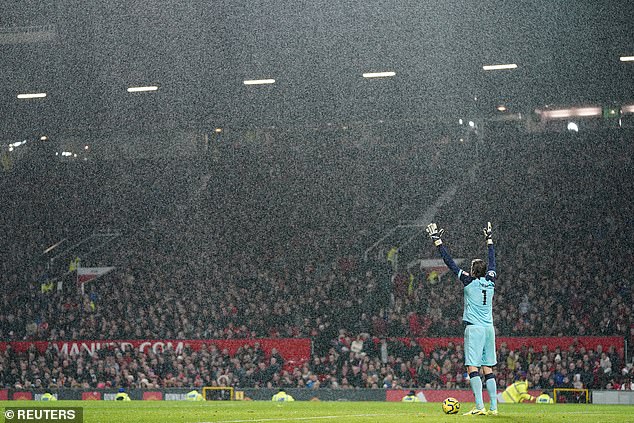 ‘They (the fans) have just got to believe me when I say I feel we are doing loads of good things behind the scenes, we are going in the right direction. See the group today, the attitude, the work-rate, that’s the core of the group that’s gonna go forward. We are in all competitions. We are still in the Carabao Cup, FA Cup, we’re fifth in the league, still challenging, we’ve improved the position from last season. We’ve got Europa League.’

Solskjaer’s support is unlikely to stop a repeat of the unrest, particularly if United struggle in the upcoming matches against Wolves, Liverpool and Manchester City.

The 3-1 home defeat to City in the Carabao Cup semi-final first leg on Tuesday showed the gap between the two clubs and fans are furious that the Glazers — some of whom were at yesterday’s game with Woodward — have loaded £500m of debt on the club.