For some male victims of sexual assault and abuse, #MeToo can feel more like #WhatAboutMe?

They admire the women speaking out about traumatic experiences as assault and harassment victims, while wondering whether men with similar scars will ever receive a comparable level of public empathy and understanding.

‘Because the movement happened to get its start with women only, in a way it furthers my loneliness as a past victim,’ said Chris Brown, a University of Minnesota music professor.

He was among several men who in December accused renowned conductor James Levine of abusing them as teens several decades ago, leading to Levine’s recent firing by the Metropolitan Opera Company.

Tyler Perry (left) recalled how difficult it was for him to go public about the abuse he suffered. He expressed hope that the momentum of the #MeToo movement might ease the path for other survivors.  Linkin Park singer Chester Bennington, who said he was a victim of sexual abuse, tragically hung himself last year

‘Men are historically considered the bad guys,’ suggested Brown, referring to public attitudes. ‘If some men abuse women, then we all are abusers ourselves … so therefore when it comes to our being abused, we deserve it.’

Brown’s sense of distance from the #MeToo movement is shared by other abused men – some of whom have been using a #MenToo hashtag on Twitter.

‘We’re never necessarily welcome to the parade,’ said Andrew Schmutzer, a professor of biblical studies at Moody Bible Institute in Chicago who has written about being abused as a teen.

‘As a male survivor you’re always an adjunct,’ he said. ‘You’re never the leading subject of a conversation.’

Schmutzer is among a group of survivors and therapists forming the leadership of MaleSurvivor , which since its incorporation in 1995 has sought to provide support and resources to men who suffered sexual abuse as children or adults. It says its website has been visited by hundreds of thousands of men worldwide.

The psychologists and therapists who work with MaleSurvivor endorse the findings of multiple studies concluding that about one in six men in the U.S. experienced childhood sexual abuse, compared with one in four women. Many adult men also suffer sexual abuse: Rape in prison is frequent, and the latest Pentagon survey found that 6,300 men in the military said they were victims of sexual assault or other unwanted sexual contact in 2016.

Despite such data, experts say many men, because of social stigma and feelings of shame, are reluctant to speak up about the abuse they experienced or to seek professional help.

Joan Cook, a psychiatry professor at Yale School of Medicine, has been treating sexually abused men for more than 20 years.

‘Many of them still espouse this John Wayne mentality,’ she said. ‘If something bad happens to you, just wall it off and don’t acknowledge it to yourself or others.’

Some of her patients fear they’ll be perceived as weak if they go public about their abuse, she said, while others worry people will view them as more likely to be abusers themselves because of what they suffered as children.

According to MaleSurvivor, a significant portion of abuse perpetrators report having been victimized by abuse, but most victims do not go on to commit sexual abuse against others.

New York-based psychoanalyst Richard Gartner, a co-founder of MaleSurvivor, says there’s increased public awareness of the childhood sexual abuse of males as a result of the extensive publicity given to scandals within the Roman Catholic Church and at Penn State University, where Jerry Sandusky was an assistant football coach before being convicted in 2012 of sexual abuse of 10 boys.

However, Gartner, like other advocates for abused men, said that in both those cases, public attention was far more focused on the perpetrators than on their victims.

Given the reluctance of many male survivors to speak publicly about the abuse, Gartner says it’s helpful when prominent men, including actors, music stars and pro athletes, do make that decision. 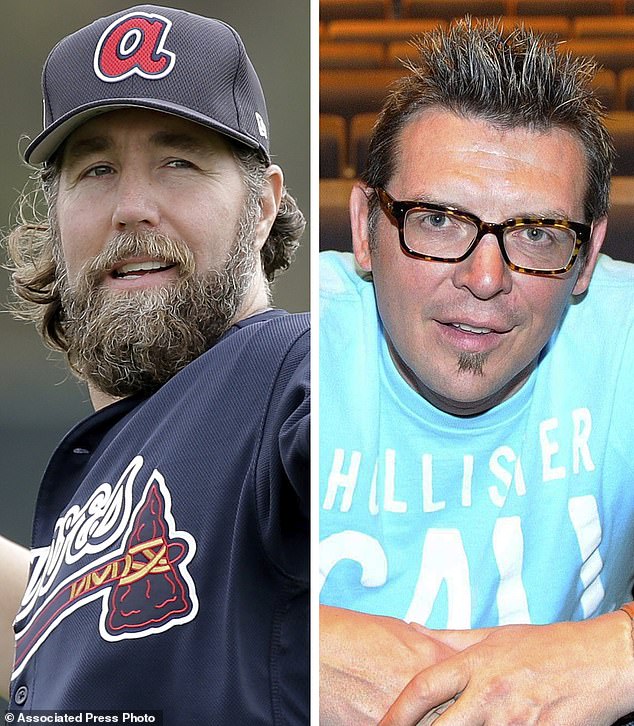 Atlanta Braves pitcher R.A. Dickey and former NHL star Theo Fleury are among the celebrities who have publicly said they are victims of sexual abuse

‘They are models for others to come forward, to tell their families, to find help,’ Gartner said. ‘It becomes a less shameful thing when somebody famous says it happened to them.’

Edwards, best known for his role on the television series ER, announced Wednesday that he has joined the board of directors of 1in6, a national nonprofit similar to MaleSurvivor that supports men who have experienced sexual abuse or assault.

Dickey and Perry, in accounts of their youth, say they were abused by females as well as males – in Dickey’s case a teenage baby sitter, in Perry’s case the mother of a friend.

The Catholic Church and Penn State scandals reinforced a pervasive perception that the child sexual abuse is overwhelmingly perpetrated by men, but Gartner said female-on-male abuse ‘is not as rare as people think.’

According to one large-scale study published in 2005 by researchers with the federal Centers for Disease Control and Prevention, female perpetrators accounted for 40 percent of the child sexual abuse experienced by men. The study found that both men and women who were abused as children were twice as likely as other people to attempt suicide later in life.

Perry, in an interview in December with The Associated Press, recalled how difficult it was for him to go public about the abuse he suffered. He expressed hope that the momentum of the #MeToo movement might ease the path for other survivors.

‘It takes a tremendous amount of courage and it’s very, very scary and you don’t know how people are going to react to it,’ he said. ‘So being in this moment, you know I’m hoping that there is change.’

Joan Cook, the Yale professor, said she was thrilled by the magnitude of the #MeToo movement, yet frustrated on behalf of abused men who ‘don’t seem to be included under the tent.’

‘Women have waited so long to get their due, so maybe there’s an attitude of, “Don’t take away my voice,”‘ Cook said. ‘But it’s not a competition.’

‘Men also have been waiting a long time, and they shouldn’t have to wait. They should be heard now.’