NS&I phonelines stopped working this morning while customers have taken to social media to complain they’re unable to access accounts.

Twitter is awash with angry customers complaining to NS&I’s official account that they are unable to access their accounts, with some blaming a new two-factor log-in process.

NS&I spent the morning apologising for ‘technical issues’ and assuring customers they are working to resolve them ‘as soon as possible’.

NS&I’s phone line were down this morning as customers took to social media to complain.

The bank told This is Money that it has now fixed the phoneline issue and maintains there are no problems with the two-factor security system.

The state-owned bank offers Premium Bonds as well as a range of other saving and investment products.

There are currently more than 118billion bond numbers eligible for the draw, up from just over 86billion eligible bonds in March 2020.

In May, NS&I upped the Premium Bond underlying prize fund rate from 1 per cent to 1.4 per cent boosting the chances of its 21million savers bagging a monthly prize.

Since this morning Twitter users have been taking to the social media site to vent their frustrations at the bank.

Tweeter Zasiura contacted NS&I this morning saying that he had been trying to log into his account ‘for days’ but is unable to seemingly due to a new stage in the bank’s authentication system.

Two-factor bank authentication systems are a common security method to keep accounts safe and is a process used by most major banks.

The multi-stage process often involves a logging into an app or website and being sent a unique one time password (OTP) to your phone which you then enter to confirm it is the account owner logging in.

The bank introduced the new security system overnight on 18 July.

Another user, James tweeted the account saying that the OTP is not being sent so he is unable to log in.

When he tried to call the helpline it was not working. James said he was planning to save a large amount with the bank but suggested he is now considering closing his account instead.

Via Twitter the bank confirmed it was having issues with its phone line and suggested James try again ‘a little later’. 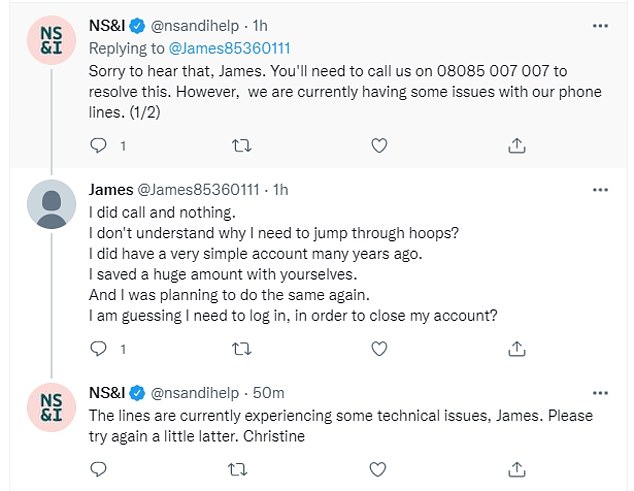 Others complained that messaging NS&I on Twitter to try and resolve their issues has been ‘less than helpful’.

Currently NS&I’s homepage is promoting the introduction of the two-factor system as ‘improved security’ adding ‘Logging in to your NS&I account is now a little different.’

A full webpage has also been created to provide customers with more details of the changes that it says includes the one time password feature as well as the new requirement for users to create a six digit pin.

Customers were quick to notice the bank’s phoneline went down

NS&I maintains that there are no central issues with the two-factor system and ask customers to take a look at the FAQ page on its website.

On consumer review site TrustPilot users are reporting similar issues. User CW said they have been trying to log into the site for two days with no luck, while another named ‘Arthur’ labelled the bank’s implementation of the two-factor system as ‘utterly shambolic’.

An NS&I spokesperson said: ‘For a period of time this morning, customers were unable to contact our call centre due to a technical issue.

‘Our team worked quickly to rectify this and minimise disruption to our customers, with them being able to contact our call centre by 11.40am.

‘Money invested with NS&I is always safe as NS&I is 100% backed by HM Treasury. We would like to apologise to our customers for any inconvenience caused.’

‘Customers experiencing problems should check out our FAQ page or contact our call centre on 08085 007 007,’