Son, 52, appears in court over ‘murder of terminally-ill mother, 79’

A man appeared in court today charged with killing his terminally ill mum in her seaside nursing home.

He visited her as normal on Monday and staff later found his Alzheimer-suffering mother’s body after she fell from a balcony of the three-storey building.

Robert Knight today faced magistrates in Southend after his mother fell from a balcony at Langley Lodge in Essex (pictured, emergency services at the scene on Monday)

Police have yet to confirm how Mrs Knight was killed but a post-mortem into her death is set to take place in the coming days.

The 52-year-old was arrested at the scene on Monday evening after paramedics and cops rushed to the scene.

Today Knight, of Leigh-on-Sea, stood before magistrates in Southend-on-Sea, but did not enter a plea.

Knight, who was dressed in prison-issued red jumper and trousers, appeared alongside a custody officer in the dock before the hearing began.

Prosecutor Crystal Penrose told the court: ‘The victim being June Knight was the mother of the defendant.

‘She was receiving end-of-life palliative care for Alzheimer’s at the Langley Lodge care home in Westcliff. The defendant is her only son and regularly visited her, sometimes twice a day.’

The court heard on Monday he visited her as normal at the home in Imperial Avenue, Westcliff.

Later that night, Mrs Knight was found dead by staff after a fall from a balcony of the three-storey building.

Due to the serious nature of the crime, the magistrates referred the case to the crown court. 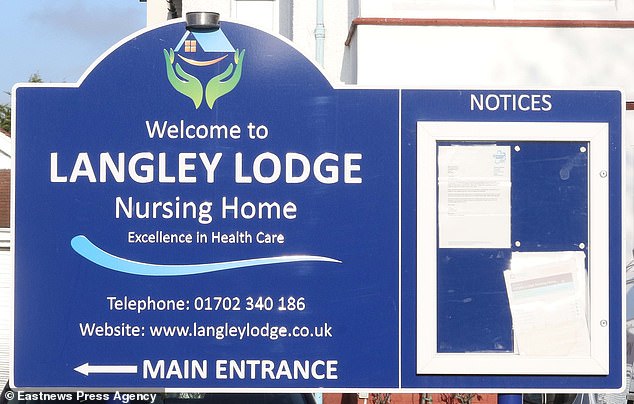 Chairman of the bench, Linette Brown said: ‘This matter cannot be dealt with by this court so you are to be seen at Chelmsford Crown Court via video link so you’re remanded in custody until that time.’

Members of staff at the home have been left ‘utterly shocked’ by the death and are now working to offer support to the other residents and their families.

Many family members arriving yesterday to visit residents were unaware of the deadly events.

Scenes of crime officers were moving in and out of the imposing three-storey whitewash home near the Thames Estuary yesterday.

Martin Bandelow said the care home deals with seriously ill patients and is difficult to enter unless you’re a family member.

He said: ‘It’s got loads of dementia patients or seriously ill patients, I think it’s end-of-life care. We quite often see an ambulance there.

‘It’s really hard to get into the home unless you’re a family member – when I’ve been there they ask who you are before they let you through the door.

‘Last night we saw an ambulance and two or three police cars. How dreadful that someone has been killed.’

One woman said: ‘It’s really shocking. There were about four police cars pulled up outside and a large police van.’

The home was last inspected in September with a full Care Quality Commission report published earlier this year and was rated as ‘good’ overall.

Inspectors found the residents were well looked after. They concluded: ‘People had sufficient amounts to eat and drink to ensure that their dietary and nutritional needs were met.

‘The service worked well with other professionals to ensure that people’s health needs were met.

‘Staff were well trained and attentive to people’s needs. Staff were able to demonstrate that they knew people well. Staff treated people with dignity and respect.’

An Essex Police spokesman said: ‘We are not looking for anyone else in connection with the death of the woman, who was related to the suspect.’

A spokesman for the home said: ‘Langley Lodge Nursing Home can confirm that an incident took place.

‘We are utterly shocked by what happened and we are cooperating with the police on this matter.

‘We are providing support to other residents and their families. We will not comment further at this time.’

An East of England Ambulance Service spokeswoman said: ‘We were called at 10.05pm on Monday with reports of an incident in Imperial Avenue, Westcliff.

‘We sent an ambulance, ambulance officer and a rapid response vehicle. ‘Sadly one person died at the scene.’