The son and daughter of a former executive at a state-owned bank have been banned from leaving China until their fugitive father returns to the country.

Victor, 19, and Cynthia Liu, 27, landed in the country in June earlier this year to visit their grandfather, who had recently suffered a heart attack, with their mother Sandra Han.

However within days of their arrival Ms Han was taken by police officers to an unknown location and her children were told that they were unable to leave the country.

This is an alleged attempt to force their father, Liu Changming, who is accused of leading a $1.4 billion fraud case, to return to face criminal charges, the New York Times reports.

But the children insist they have been estranged from their father since 2012, and despite the fact they are both American citizens they are being held by authorities under an exit ban, commonly used on Chinese natives.

Mr Liu was born in the U.S. and would typically not be treated as a Chinese citizen despite his parents’ background, however he is being held due to the fact he has documents stating his duel-nationality.

Chinese Foreign Ministry justified holding the family by saying that they all hold proof of Chinese citizenship and are being held on suspicion of economic crimes.

These practices have been slammed by American officials who said that the exit bans are a violation of rights and since issued a warning, stating that the ban is a risk to American’s traveling to China.

One of the politicians who have made his opinion on the ban evidence is Secretary of State Mike Pompeo, he put forward the case of the Liu family to a Chinese foreign policy official during a visit to Washington this month. 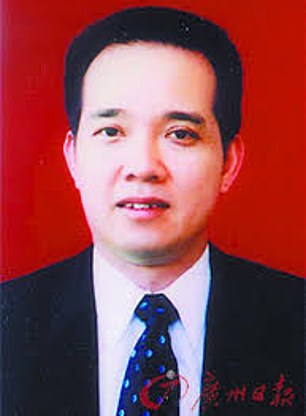 This is an alleged attempt to force their father, Liu Changming (pictured), who is accused of leading a $1.4 billion fraud case, to return to face criminal charges

The desperate siblings have written to National Security Adviser John R. Bolton to tell him that they are being held despite detectives telling them they are not under investigation for their father’s alleged crimes.

In a letter obtained by the news site, Ms Liu wrote: ‘We are being held here as a crude form of human collateral to induce someone with whom I have no contact to return to China for reasons with which I am entirely unfamiliar.’

Ms Han, 51, has been taken to a hotel on several occasions to meet with an American consular officer by Guangzhou police, as they are being offered citizen services due to entering the country on American passports.

Liu , 52, fled China in 2007 after police accused him of issuing illegal loans to property developers, making him a central player in one of the country’s biggest bank frauds.

His charges were a part of a Chinese initiative to crackdown on corruption, which often involves tying family members to the offences.

Ms Han, who lives in Massachusetts and has acquired her own wealth from a collection of successful property businesses, has been backed by Democratic Senators Elizabeth Warren, Edward J. Markey and Representative Joseph P. Kennedy III.

Mr Markey said that their office is trying to secure the families safe return to America and have been liaising with officials to make this happen.

Before leaving America to visit their grandfather, Mr Liu was in his sophomore year at Georgetown University, and Ms Liu was working at the consulting firm McKinsey & Company in New York.

They had a privileged upbringing and both attended an elite boarding school in Massachusetts before Ms Liu went on to graduate in business from Stanford and Harvard.

In a bid to flee the country the children are believed to have traveled between cities and have so far made three attempts get back to America.

Those involved in the case have said that they are hoping President Trump will mention the case during the Group of 20 summit meeting where he is expected to meet Chinese President Xi Jinping.

When exit bans are in place, those being held are not kept in a detention center and authorities do not have to present a legal justification for the ban.

Jerome A. Cohen, a law professor at New York University, told the NY Times: ‘Many police actions are now taken outside the legal system, and both Chinese citizens and foreigners, especially those who used to be Chinese citizens, have been kept in China with no apparent legal authority.’

The growing practice has been introduced following an increased ignorance for civil rights among security forces, the anti-corruption campaign and corrupt officials moving overseas.

Liu Changming was the top executive at the Bank of Communications in Guangzhou and was charged with making illegal loans, his co-conspirators were convicted of the charges but only half of the money was recovered.

He was put on the list of the 100 most-wanted fugitives in 2015 and a ‘red notice’ for his arrest was issued by Interpol.