Colby-Lea Saunders, 12, was attacked by a gang as he walked home from school

A 12-year-old boy was allegedly attacked by up to 30 children after he refused to take part in a fight.

Colby-Lea Saunders was assaulted as he walked home from school in Stockton-on-Tees, County Durham, it is claimed.

His mother Carrie-Ann Saunders, 43, claims he was being goaded into having a fight with a fellow pupil at Outwood Academy Bishopsgarth on Tuesday and was being called names for declining.

Mrs Saunders said: ‘He left school as normal and was heading towards Hardwick with one of his friends when a huge group of pupils followed him.

‘They began pushing and shoving him into a circle and were trying to force him to fight another child. Every time he tried to walk away they called him “weak” and continued to push him.’

Mrs Saunders said Colby-Lea – who suffers with sensory processing disorder, which is associated with autism – ran away but was followed by the group.

‘He managed to get his phone out to ring his dad but it was knocked out of his hand and now it’s cracked,’ said Mrs Saunders, who has three other children. 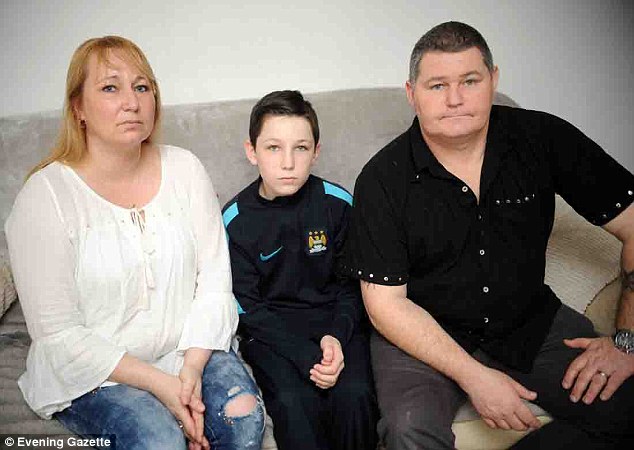 Carrie-Ann Saunders, 43, is pictured with her son Colby-Lea and his father Lea Saunders, 45

‘His dad could hear the commotion down the phone and when he eventually spoke to Colby-Lea, he said he sounded traumatised.

‘He went to pick him up but the group had gone by that point and Colby-Lea was just left really shaken by it all.’

Mrs Saunders, who is also mother to Amber, 14, Ebonierose, ten, and Carrie-Willow, two, said Colby-Lea has been left with aches and pains to his side after the attack.

‘It’s absolutely awful as I can see the pain it has caused to him all over his face,’ she added. ‘He’s a nervous wreck now, and doesn’t feel safe to leave the house.’

Mrs Saunders said that she informed the school following the attack but is not happy with their response, and has now decided to pull Colby-Lea from the school.

She continued: ‘He is so nervous now, he can’t even walk down the street without wanting to turn back. He doesn’t know what he has done to deserve any of this. 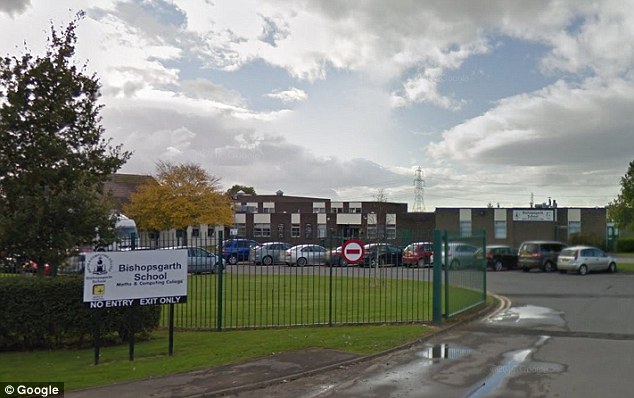 ‘He doesn’t do anything to anyone and only has a couple of friends. I spoke to a teacher who said they would look into it but I haven’t heard anything since.

‘It’s just scary to think how some children believe they have a right to gang up and intimate someone for a laugh.

He’s a nervous wreck now, and doesn’t feel safe to leave the house

‘Colby-Lea said he could hear them laughing at him when he refused to fight. He said he felt humiliated by it all.’

Cleveland Police are now investigating. A school spokesman said: ‘We cannot disclose information with regard to individual students but we take any reports from students, parents, carers or members of the community very seriously.

‘When an incident is reported to us we always ensure that it is investigated and take appropriate action. We always keep in close contact with parents or carers.

‘We have worked with the police regarding this alleged incident and will do so in any investigations they may carry out.’