The son of a Brooklyn Supreme Court judge will be released on a $100,000 bond after having been arrested by the FBI on four federal charges in connection with the riot at the US Capitol last week.

FBI agents arrested Aaron Mostofsky, 34, who is the son of Judge Shlomo Mostofsky, in New York Tuesday morning. He faces up to 10 years behind bars.

The younger Mostofsky, who dubbed himself a ‘caveman’, has been hit with multiple charges, including theft of government property for allegedly stealing a police riot shield and bulletproof vest, unlawful entry and disorderly conduct, knowingly entering or remaining in any restricted building or grounds without lawful authority, and knowingly, with intent to impede government business or official functions, engaging in disorderly conduct on Capitol grounds.

Mostofsky made a virtual appearance before US Magistrate Judge Sanket Bulsara at 3pm on Tuesday.

Bulsara, who called the charges ‘quite grave’, approved Mostofsky’s release on a $100,000 bond along with other restrictions that include GPS monitoring. The bond was to be secured by real estate.

The judge ordered him upon his release to reside with his brother, Nachman Mostofsky. 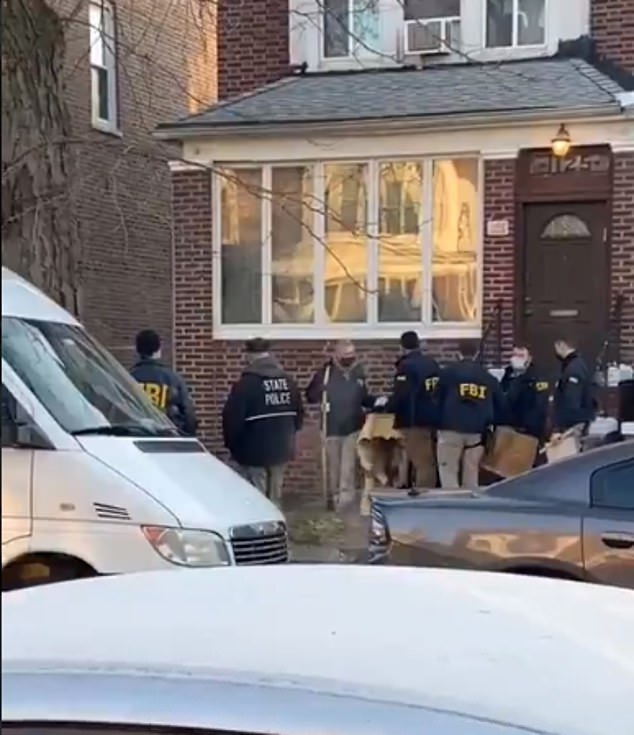 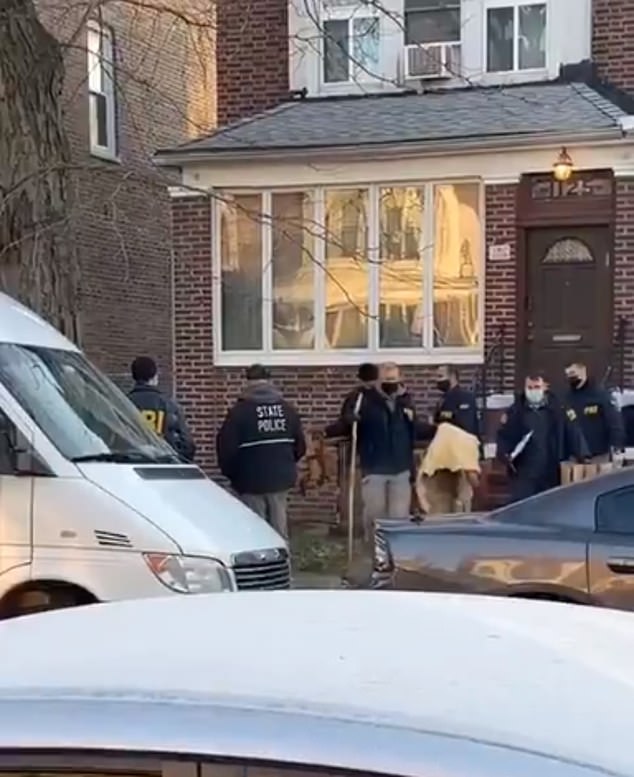 BREAKING: Aaron Mostofsky, the son of a NY Supreme Court judge was arrested in Midwood Brooklyn on Tuesday morning for his alleged involvement in the Capitol riot. pic.twitter.com/MweFpdvLkX

The government, which is being represented by Josh Hafetz, Assistant US Attorney for the Eastern District of New York, asked for the travel restrictions to ensure Mostofsky doesn’t flee the jurisdiction or participate in any other political protests, especially ahead of President-elect Joe Biden’s inauguration next week.

Hafetz told the judge: ‘It is important that Mr Mostofsky not engage in the behavior that he engaged in last week.’

Mostofsky’s travel has been limited to New York City. If he needs to travel outside the jurisdiction, he will need to acquire permission. He was also told to surrender his passport and he will be under a curfew.

He was also ordered not to have contact with co-defendants or co-conspirators involved in the riot on the Capitol.

His attorney, Jeffrey Schwartz, told the court: ‘I believe evidence will show that he was not part of the mob, he was not rampaging, he got caught up in it.’

‘He will stay far away from Washington, any political rallies, he will have nothing to do with any of that stuff,’ Schwartz added. 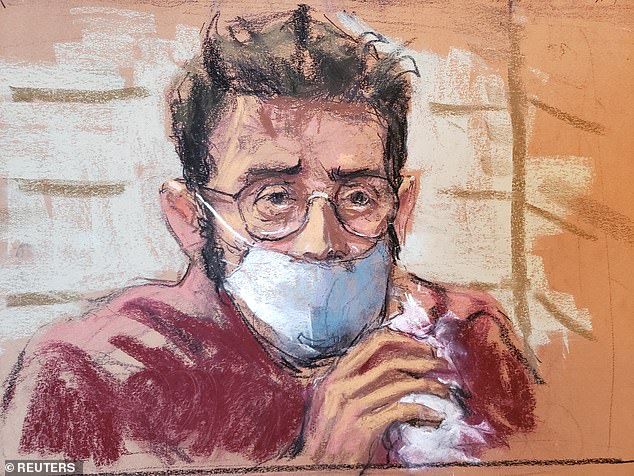 Mostofsky, shown in a court sketch, appeared virtually before US Magistrate Judge Sanket Bulsara on Tuesday 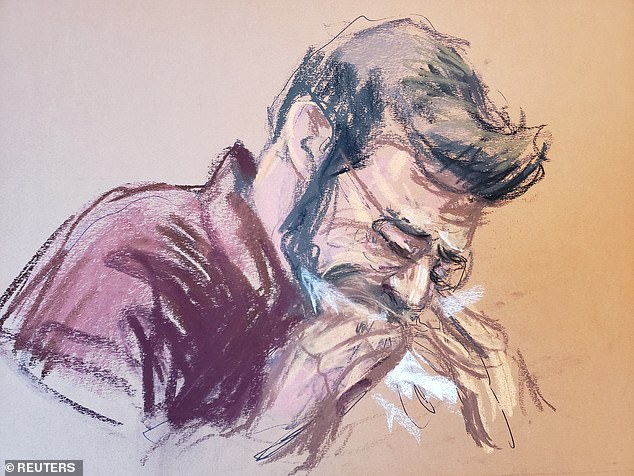 He was ordered released on $100,000 bond along with other restrictions that include GPS monitoring. Mostofsky also must surrender his passport 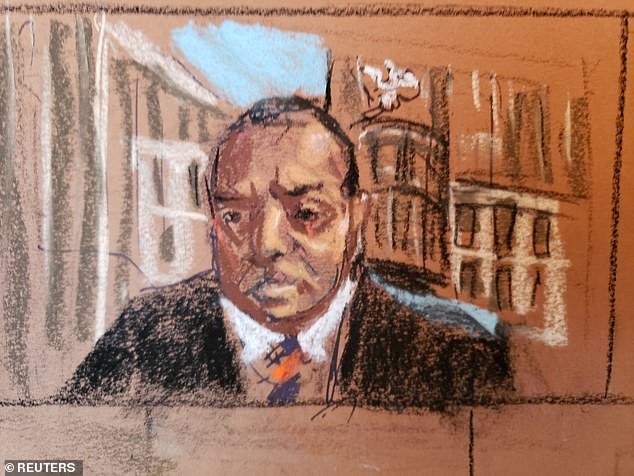 ‘He understands how the thing in Washington got out of hand… I can ensure the court that his only interests now is to address the charges against him.’

If convicted on the theft of government property charge, Mostofsky faces a maximum of 10 years in prison.

Mostofsky’s arrest comes nearly a week after he was pictured walking down the stairs outside the Senate Chamber dressed in fur pelts and a bullet proof vest and carrying a wooden walking stick.

Video of Mostofsky’s arrest showed agents walking out of his brother’s home carrying the fur pelts that Mostofsky wore while inside the Capitol on Wednesday. 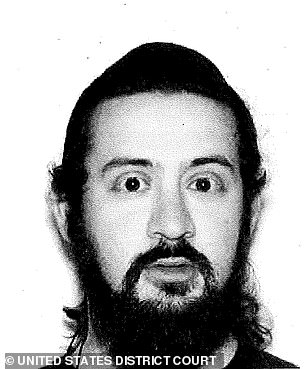 Authorities said when Mostofsky (pictured) tried to coordinate meeting up with a friend, he told him: ‘If we find each other look for a guy looking like a caveman’

Authorities were also seen carrying the wooden walking stick Mostofsky was seen holding at the time.

Mostofsky was seen walking just ahead of a man carrying the confederate flag during the riot. He told the New York Post at the time: ‘The election was stolen.’

His brother, Nachman Mostofsky, who also attended the rally but claimed he did not enter the Capitol building said his brother ‘did nothing illegal’ and ‘was pushed inside’.

Other images of Aaron Mostofsky showed him holding a police shield that he claimed he found on the floor.

A spokesman for Shlomo Mostofsky, told the New York Post: ‘Justice Mostofsky has no knowledge of these unfortunate events.’

Court documents released on Tuesday revealed that investigators received a search warrant for Aaron Mostofsky’s Instagram account, where officials say he ‘confirms’ that he is the person seen wearing and holding property of the Capitol Police.

In one exchange on Instagram, a user send a photo showing Mostofsky in the Capitol and says: ‘Your famous.’

According to court documents, Mostofsky says in response: ‘IK unfortunately.’

During the conversation, Mostofsky also describes his presence in the Capitol, authorities said.

‘But it was like I’m here now how did I get there,’ the complaint reads. Officials said he also talked about being on a bus to Washington, DC, just after 6am on January 6.

Authorities said he then tried to coordinate meeting up with a friend, saying: ‘If we find each other look for a guy looking like a caveman.’

‘He later states, in a likely reference to the presidential election: “Even a caveman knows it was stolen”,’ the complaint alleges.

During the riot, protesters attacked police with pipes, sprayed irritants and even planted live bombs found in the area. 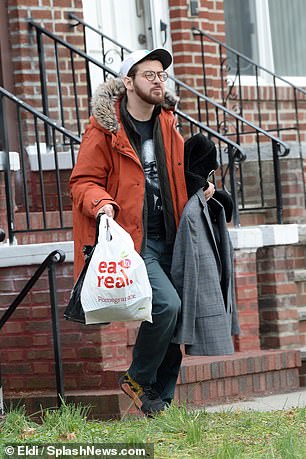 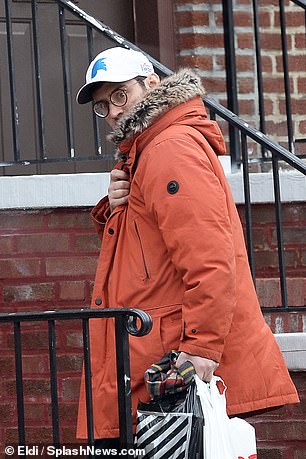 The younger Mostofsky has been hit with multiple charges, including theft of government property for allegedly stealing a police riot shield and bulletproof vest 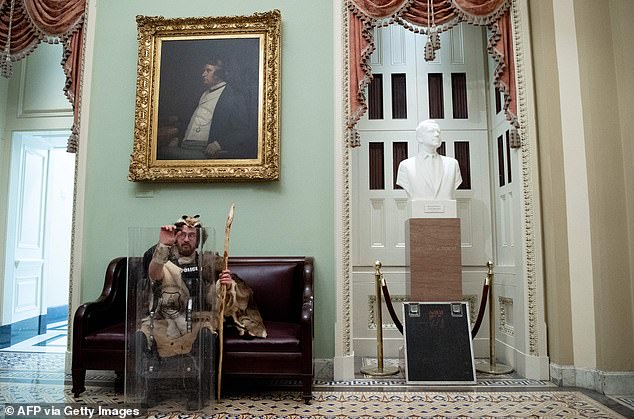 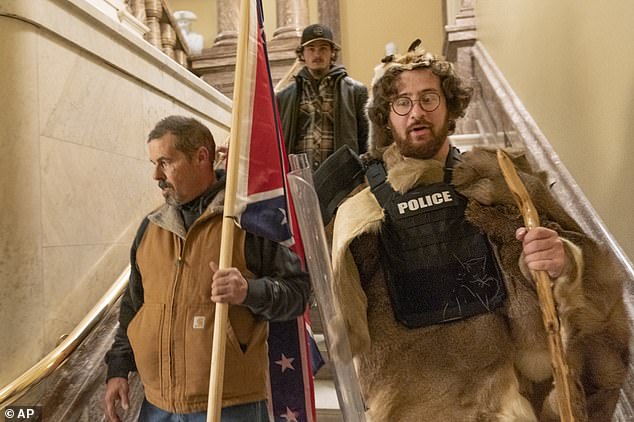 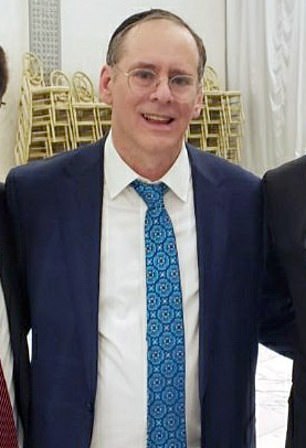 Mostofsky, 34, who is the son of Judge Shlomo Mostofsky (pictured), was released on $100,000 bond on Tuesday afternoon

The FBI has continued its search for those who violently and illegally entered the Capitol.

So far, at least 82 people have been arrested and more than 55 have been charged over the insurrection. Hundreds more are being hunted by the authorities but are yet to be found, including 25 people who are being investigated on terrorism charges.

The acting US attorney for the District of Columbia, Michael Sherwin has called the scope of the multi-agency hunt for the rioters ‘unprecedented’.

He has also fumed at Capitol Police for letting so many of them get away, saying it now makes the task of tracking them down more difficult.

He told NPR that staffers are now working round-the-clock to try to identify the criminals from photos and videos taken on the day.

‘I don’t want this tyranny of labels saying this was sedition, this was a coup. But what I will say is, it was criminal,’ he said.

There is no running list of all those charged because the investigation into what happened is being handled by multiple authorities; the DC Metropolitan Police, Capitol Police and the FBI are all running probes, along with prosecutors from the Justice Department.

Capitol Police Officer Brian Sicknick died on Thursday after he was struck in the head by a fire extinguisher.

A second member of the Capitol Police, Howard Liebengood, was on duty on Wednesday and died by suicide on Saturday.

Four rioters also died – one woman was shot by Capitol Police, and three others died during medical emergencies.

One of those was apparently trampled in the melee.