Son of pilot who sunk Nazi Bismarck at war with Wikipedia

The son of the pilot who helped deliver a critical blow to the Nazi warship Bismarck is locked in a battle with Wikipedia in an attempt to win the proper recognition for his father’s accolades.

On the internet encyclopedia, another pilot called John Moffat who wrote the book ‘I Sank the Bismarck’ is given credit for the feat.

Yet it has been proven that Sub-Lieutenant Kenneth Pattisson delivered the damaging blow to the torpedo that disabled the ship’s rudder, not Mr Moffat.

However Wikipedia still credits Mr Moffat and Rodney Pattisson claims his father has been denied credit due to the mistake of an amateur American historian.

Sub-Lieutenant Kenneth Pattisson delivered the damaging blow to the torpedo that disabled the ship’s rudder, not John Moffat who wrote the book ‘I sank the Bismarck’

Mr Pattisson, a two time Olympic gold medal-winning sailor, has his father’s claim supported by senior Royal Navy officers, along with the Fleet Air Arm museum and Navy Wings, who are responsible for the upkeep of vintage naval planes. 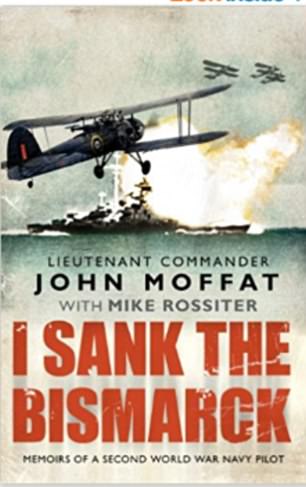 Mr Moffat’s account of the events involving the Bismarck went unchallenged until the wreckage was found nearly three miles underwater. Underwater cameras showed that the torpedo blasted the starboard side, yet Mr Moffat refused to alter the title of the book. He died last year, aged 95.

Mr Pattisson, 75, said: ‘He spent the last nine years of his life being wined and dined at naval functions because he was good for fundraising. He revelled in it. He was introduced as the man who crippled the Bismarck. He didn’t say “no I didn’t”. He just stood there and smiled.’

Rear Admiral John Tolhurst, the former captain of aircraft carrier HMS Invincible, has also written to Wikipedia in an attempt to correct the factual error on their webpage.

He told the Times: ‘I’m totally convinced that the torpedo must have been launched from the starboard side. Unfortunately the Fly Navy Historic Trust [now Navy Wings] paraded Moffat around to help their fundraising.

‘There’s no doubt he enjoyed the glow and he allowed it to happen and there were no survivors around to argue.’

He said: ‘I don’t know whether John Moffat claimed in so many words to have sunk the Bismarck but it is fair to say he was economical with the truth and didn’t set the record straight when people said he had.’