‘She’s in the fridge!’ Son who dismembered his mother and stuffed her into the freezer after she nagged him about going to school is sentenced to 30 years in jail

A man who admitted to killing and dismembering his mother during an argument in their Honolulu apartment has been sentenced to 30 years in prison.

Yu Wei Gong was charged with murder after he called police in 2017 to turn himself in after a suicide attempt.

He admitted killing his mother Liu Yun Gong about six months earlier, according to court documents. When officers asked where his mother was, he said ‘in the fridge.’

An officer searched the freezer and found human remains, including two arms with hands and a decapitated head, in numerous plastic trash bags, court documents said.

Yu Wei Gong, center, appears in court in Honolulu on Monday accompanied by his attorney, Darcia Forester, left, and Mandarin Chinese language interpreter on the right. Gong, who admitted to killing and dismembering his mother during an argument in their apartment 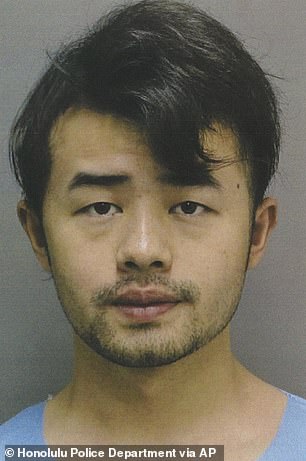 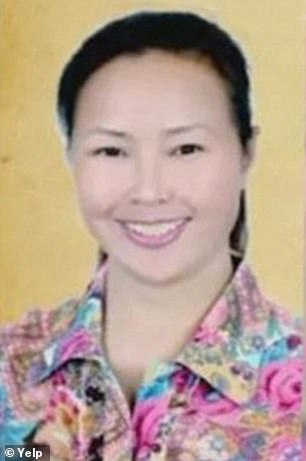 Yu Wei Gong, left, admitted to killing and dismembering his mother during an argument in their Honolulu apartment. He has been sentenced to 30 years in prison

The woman was found wrapped in seven plastic bags inside a refrigerator freezer in the family’s sixth floor apartment in Honolulu’s beachfront neighborhood of Waikiki.

Authorities said Gong initially phoned dispatchers in April 2017 and informed them that he was suicidal. That’s when he admitted to police: ‘I killed my mother.’

Gong admitted to police he killed her after he became angry because he didn’t want to go to school.

Authorities determined she had died from blunt force trauma to the head.

Police said Gong called it an ‘accident’ and said he didn’t mean to do it.

Last year, he pleaded guilty to manslaughter, avoiding a life sentence. His defense attorney and the prosecutor in the case said it’s a deal the victim’s family supports.

Gong, 28, spent most of Monday’s sentencing looking down. He spoke quietly as he apologized to his family in China and Hawaii. ‘I am ashamed for what I did,’ he said. ‘I’m sorry, Mom.’ 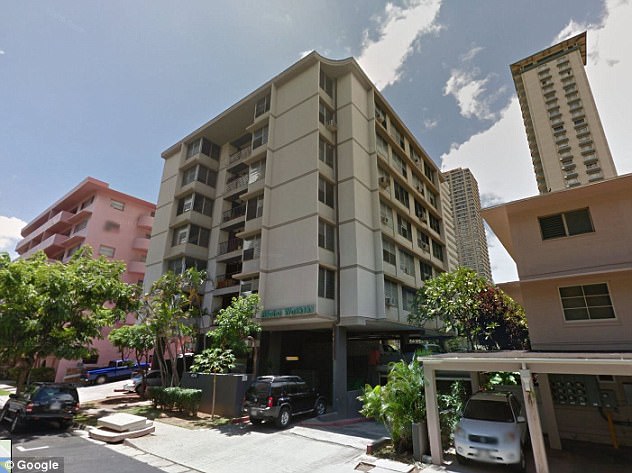 The Hawaii man confessed to police after they found human remains in their apartment (the building, pictured) in April 2017. Gong’s mother has been dead since September 2016

Gong feels he doesn’t deserve the forgiveness his family has given him, said Darcia Forester, his public defender. ‘I want to make clear that he did love his mother and she was a very good mother,’ she said. ‘Under no circumstances did she deserve what happened.’

Liu Yun Gong worked at a spa as a licensed therapist.

When she didn’t show up for work one day, her boss, Julie Kim, told the Star Advertiser that she tried her cell phone several times but got no answer.

Later, she said Liu Yun’s son called her and told her his mother had gone to a neighboring island and left her phone at home and wouldn’t be back for a couple of months.

She said the last words the doomed woman said to her were ‘see you tomorrow.’ 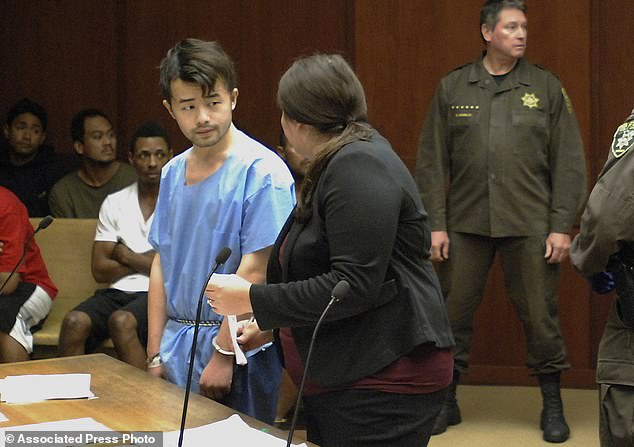 Gong, pictured in 2017, killed his mother and then stuffed her body parts into a freezer

Judge Paul Wong noted the ‘obviously sensational facts’ in the case, even though there was no mention of the gory details.

Wong sentenced Gong to 20 years for manslaughter and 10 years for identity theft, to be served separately. A one-year sentence for abuse of a corpse is to be served at the same time. Gong will receive credit for time he’s already served.

A parole board will determine the minimum number of years Gong must serve. Deputy Prosecuting Attorney Wayne Tashima said his office won’t recommend fewer than 20 years.