Songs Of Praıse is 60! Aled Jones and Katherine Jenkins host an anniversary episode

Aled Jones and Katherine Jenkins are both Welsh superstars who’ve sung for the Queen, popes and presidents. But they are at their happiest when on the world’s longest-running religious TV series, Songs Of Praise.

The two are at Westminster Abbey to celebrate the show’s 60th anniversary with a special episode. They’re among 270 presenters over the years (Cliff Richard and Charlotte Church included), many of whom will take part in the tribute, and the show continues to reach more than a million viewers a week.

Both feel privileged to be part of one big happy family, but after four hours of recording their favourite hymns and special collaborations with guests including Young Chorister of the Year Alexander Olleson, Katherine admits there were tears as the emotional significance of the occasion overwhelmed them.

‘We were in awe of Westminster Abbey,’ she says. ‘We were singing Bread Of Heaven with that absolutely gorgeous arrangement by conductor Ken Burton and I burst into tears.

Katherine Jenkins, 41, and Aled Jones, 50, are set to host an anniversary episode for the world’s longest-running religious TV series, Songs Of Praise, from Westminster Abbey

‘I found it really emotional, and I know I wasn’t the only one. It was special to be singing with a congregation again.

‘We were really excited to all be in the same room with past and present hosts. It was like being at a family wedding. The team is special, sometimes if things are going wrong they’ll say, “Come on, we need a God moment,” and it’ll magically sort it out – stop the rain, stop the noise, or whatever it is.’

Like Aled, Katherine, 41, grew up watching Songs Of Praise.

‘It’s been part of my life for as long as I can remember. My family attended church and my Nana Barbara would follow that up with watching Songs Of Praise. I remember sitting with her singing along to the hymns.

‘When I started to work professionally as a singer I was really proud to tell her I was going to be on Songs Of Praise. As a guest performer it always felt like a lovely show to be involved with, so when they asked me to be a presenter I was thrilled. It’s one of the nicest things I get to do. I love it.’

That’s quite something considering that mezzo-soprano Katherine officially became the world’s most successful classical singer last year. Not only that, but she sang the National Anthem at Her Majesty’s Diamond Jubilee and at the Queen’s 90th birthday celebrations.

She’d been singled out as a prize-winning member of the Royal School Of Church Music Cathedral Singers at the age of ten and by 15 she was gaining a name as a mezzo-soprano. Tragically, it was then that her father Selwyn, who had dedicated himself to her passion for music, died of lung cancer just before her GCSEs. 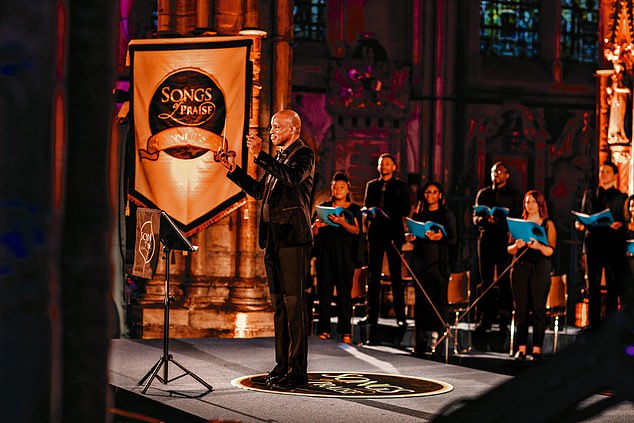 Katherine, who became the world’s most successful classical singer last year, revealed faith has helped her get through some challenging times. Pictured: Conductor Ken Burton

His memory has been the driving force in her life – every album and award is dedicated to him.

‘He was my biggest fan and I think, “Would I be here without him putting in all that time and effort?” I believe that, spiritually, he’s watching over me. I feel my dad’s been on this journey with me, somehow or other,’ she says.

Katherine’s faith has helped her get through some challenging times. ‘When Dad died I found it hard to understand why God had taken him away from us without much warning. We didn’t get much time with him at the end. So at that time I was really angry and questioned everything.’

THE QUEEN WATCHES WHENEVER SHE CAN

There’s naturally a bit of good-spirited competition between the Songs Of Praise presenters – not least longest-serving host Pam Rhodes, who joined in 1987, and Aled. ‘I’m around 50 shows behind Pam and want to catch her up,’ jokes Aled, who’s hosted 338 to Pam’s 386.

‘I came on board when Sally Magnusson was pregnant,’ recalls Pam, whose most memorable moments include time spent with Dolly Parton and Harry Secombe.

‘Dolly said, “My mum said I should never go to church in a skirt that’s too short, so I haven’t been inside one since.” But she’s a great Christian lady. 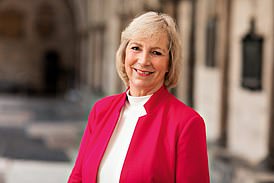 ‘I did a show with Harry weeks before he died. He was a Songs Of Praise presenter himself and was very dapper. He always had two pairs of identical trousers – one for standing up in and one for sitting down.’

Her most worrying time was filming at Windsor Castle for a Christmas episode. ‘I remember the fire there in 1992,’ says Pam.

‘I thought it was us – we had a team lighting St George’s Chapel on the Friday. But the fire was elsewhere. We still recorded on the Monday. One of the staff took us to film the damage.

‘He said, “I don’t know why you’ve been allowed here, no one comes through here.” I said, “Why are we allowed?” and he said, “Because it’s the Queen Mother’s favourite programme and the Queen watches it whenever she can.”’

And so it seems. The Queen has recorded a message for the anniversary, saying it ‘has shown Christianity as a living faith not only through worship songs, but by featuring the many people who have put their faith at the centre of their lives.’

She has talked about how, within a few days of her father’s funeral, she had an extraordinary experience the night before her maths GCSE where he came to her in a dream saying, ‘Look under the bed, love.’

She did, and to her surprise, she found a notebook in which she’d written just one thing – an algebra equation. In the exam the next day she needed that equation, and she got an A grade.

‘I’ve always felt a connection with my father,’ she says. ‘There have been times when I’ve felt like he’s been there with me, like the algebra book.

‘To the point where every time I step out to sing or film, like at the Abbey, I always have a word with God and with my dad and I ask them to bless my performance. So he’s never far from my thoughts.

‘I’m drawn to emotional music because of having experienced loss. And I think my work ethic comes from the strength of my mum. She’s always taught me to work hard and be dedicated. But I think the emotion comes from having lost somebody so dear.’

Aled, 50, has been a household name since the 80s when he became one of the world’s most successful boy sopranos with his huge Christmas hit Walking In The Air.

‘I first sang in Westminster Abbey when I was about 12 and it’s funny as in some ways I haven’t progressed,’ he says.

‘I’m still singing the music I did back then, but that’s where my heart is. It was very odd when my voice broke, but it was coming back to hymns that the voice felt right again.

‘When I’m in that darkness of a cathedral or a church and I sing something like Make Me A Channel Of Your Peace, that’s where I feel a connection.’

Aled has been performing on Songs Of Praise since the age of 16 before debuting as a presenter in 2002. ‘I did a couple of programmes when I was 16 and I was terrible,’ he laughs.

‘When I did start presenting regularly I took it very seriously, and I still do. I realise that I’m really honoured to present a programme that’s been going for so long.

‘But what gives the show such longevity is that the music reminds everyone of sitting cross-legged in primary school, belting out hymns before we went to class. They give people comfort. Plus, it’s probably one of the greatest travelogues with stories from all over the country.’

The stories featured are heartfelt and inspirational. One of the most memorable for Aled was Nadim Ednan-Laperouse who, along with his wife, set up Natasha Allergy Research Foundation after their 15-year-old daughter Natasha died on a flight after an allergic reaction to sesame seeds in a Pret a Manger baguette.

Working with government, Nadim has created Natasha’s Law to close a loophole in food labelling.

In the episode, Nadim described how, despite not being religious, when the plane landed five angels made of yellow light appeared, hovering over Natasha’s body from head to toe. It had a profound effect on him.

‘I cried and came away from the interview with Nadim feeling like I’d gained a friend,’ says Aled. ‘His story was like nothing I’d ever heard.’

Aled’s just written the first of three children’s novels called Bobby Dean Saves Christmas which comes out on 14 October. ‘Bobby has this magical voice that takes him on wonderful adventures all over the galaxy.’

The Songs Of Praise 60th anniversary programme is on tomorrow at 2.45pm on BBC1 and BBC iPlayer.