Sons of US defector to North Korea threaten Donald Trump

The two sons of a US Army defector who fled to North Korea in 1962 have threatened Donald Trump that they will ‘wipe the land of the US from the earth forever’.

Appearing on a propaganda video released by North Korea, Ted and James Dresnok confirmed the death of their father James, aged 74 earlier this year.

Both Ted and James Dresnok Jnr are thought to be the only white North Korean citizens in the country.

James Dresnok’s sons, James, left, and Ted, right, threatened the United States in a bizarre video released to announce the death of their father who defected in 1962 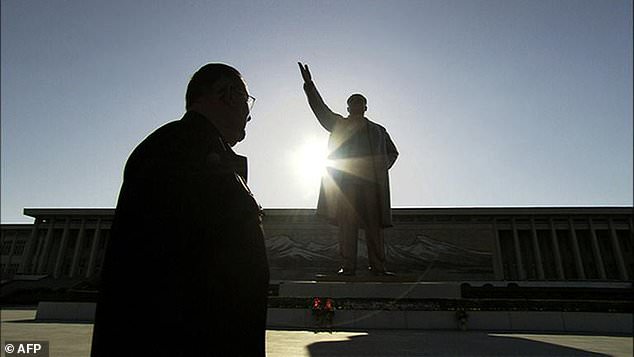 James Dresnok, looking at a statue of late North Korean leader Kim Il-Sung, in Pyongyang was believed to be the last living US serviceman who defected to North Korea in 1953 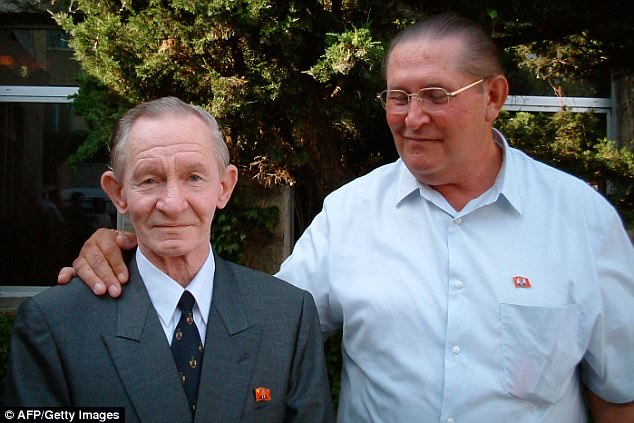 Their father appeared in several propaganda videos for the evil regime after he crossed the heavily-fortified Demilitarized Zone.

Several US personnel defected in the aftermath of the 1950-53 Korean War. Desnok was the last known defector to remain in the country.

According to Ted Dresnok, ‘US imperialists’ were raising ‘war hysteria madness’ while knowing little about the North’s military or people.

He predicted in the event of war: ‘We will not miss the opportunity and wipe the land of the US from the earth forever.’

In the video, posted Friday, his brother James, whose Korean name is Hong Chol, added: ‘We have our dear supreme commander Kim Jong-Un. If he is by our side, our victory is certain.’ 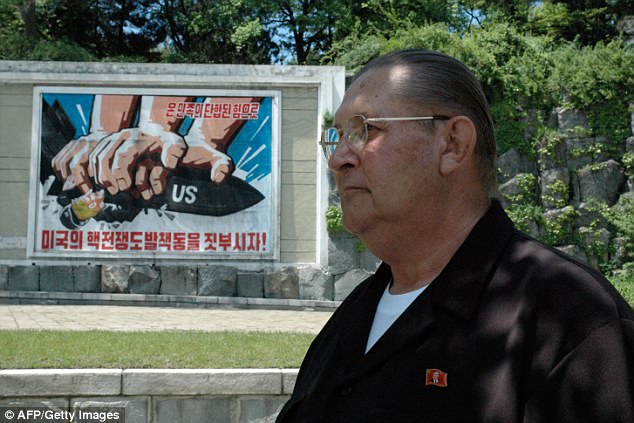 Dresnok, who died in November is said to have married Doina Bumbea, a Romanian who was reportedly abducted by North Korean agents and smuggled into the country

In a video interview posted on the state-run Uriminzokkiri website, Ted and James Dresnok, his two adult sons, confirmed that their father suffered a fatal stroke in November last year.

‘Our father was in the arms of the republic and received only the love and care of the party until his passing at age 74,’ said Ted Dresnok, the elder of the two.

Brown-haired and hazel-eyed, he wore a Korean People’s Army uniform in the video like his brother, adorned with a badge depicting the North’s founder Kim Il-Sung and his son and successor Kim Jong-Il.

Both men were born in North Korea and spoke Korean with a thick Northern accent.

‘Our father asked us to render devoted service to our great leader Kim Jong-Un,’ said Ted Dresnok, who also goes by the Korean name Hong Soon-Chol.

Their comments were similar to those of ordinary North Koreans, who normally only ever express officially approved sentiments when speaking for a foreign audience.

It was the brothers’ second appearance on the programme, after they praised the country in a May 2016 interview. 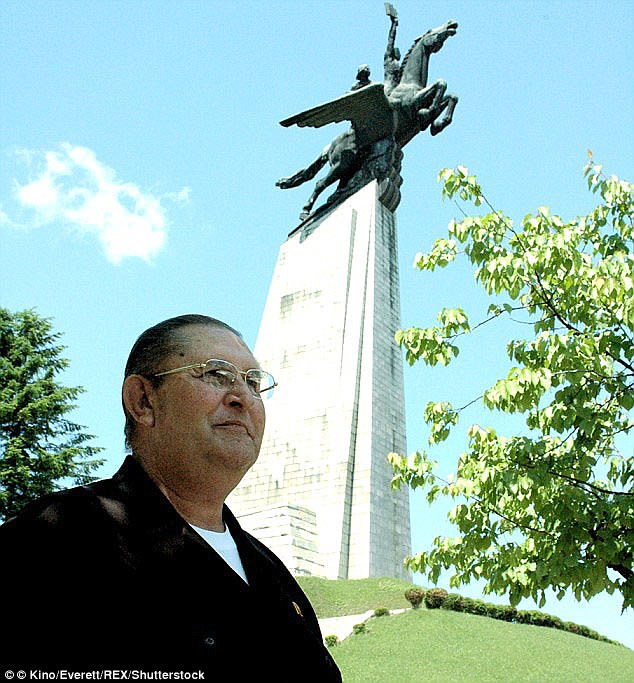 Dresnok had numerous discipline problems while serving with the US military 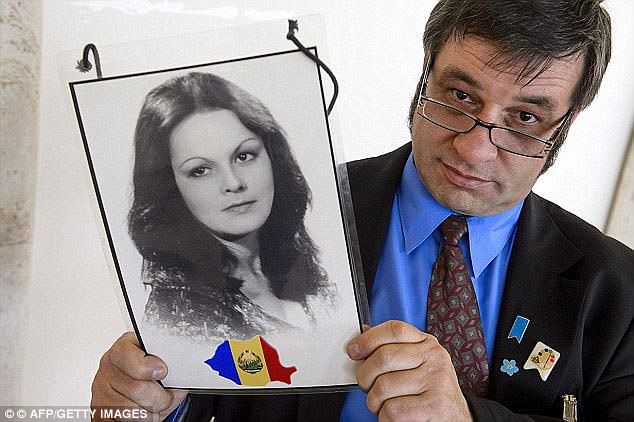 North Korean agents abducted artist Doina Bumbea. She died of cancer in 1997. Her brother Gabriel, pictured right, raised her case with the United Nations in 2014

Their mother is said to have been Doina Bumbea, a Romanian whose family say she was kidnapped by Pyongyang.

In a searing 2014 report on human rights in North Korea, a UN commission of inquiry said: ‘Women abducted from Europe, the Middle East and Asia were subjected to forced marriages with men from other countries to prevent liaisons on their part with ethnic Korean women that could result in interracial children.’

Another American soldier defector, Charles Jenkins, married Japanese abductee Hitomi Soga within weeks of meeting her in the North.

Soga was allowed to leave in 2002, and Jenkins and their two daughters followed suit two years later. He was court-martialled for desertion and given a 30-day custodial sentence. They now live on a small Japanese island where he makes a living selling rice crackers.

Four other post-1953 US army deserters are all believed to have died in the North.

Reports of Dresnok’s death emerged earlier this year but the brothers’ video is the first official confirmation.

Tensions have been mounting in the region since Pyongyang tested two intercontinental ballistic missiles last month that appeared to bring much of the US within range.

That sparked a volley of threats between Pyongyang and Washington, with President Donald Trump warning the North of ‘fire and fury’ while Pyongyang threatened to fire a salvo of missiles towards the US territory of Guam.

The late James Dresnok, known as Joe, was 21, newly divorced and reportedly facing a court-martial when he made his way through the minefields that litter the DMZ to reach North Korea.

He was the subject of a 2006 British documentary, ‘Crossing the Line’, which was nominated for a Grand Jury prize at the Sundance film festival.

In it he expressed satisfaction with his life in Pyongyang, where citizens enjoy better standards of living than people elsewhere in the isolated country.

Co-director Nick Bonner told AFP: ‘Joe seemed to have accepted he was going to remain in the north due to politics and ill health.

‘Also his memory of life in the US was not so rosy, having grown up in an orphanage and not established himself.’

Dresnok once told a CBS interview he would not leave the North even if ‘you put a billion damn dollars of gold on the table’.