Woody Allen’s wife Soon-Yi Previn – the estranged adopted daughter of Mia Farrow – has said the director ‘took a big leap’ and pursued her.

Previn, 47, defended her 82-year-old husband against what she contends is unfair treatment in the #MeToo era and attacked her adoptive mother in her first public comments about the relationships in decades.

In an in-depth article in New York magazine, Previn talked of a troubled relationship with her mother and how she fell in love in 1992 with Allen, who was Farrow’s boyfriend at the time.

She denies being manipulated into a relationship at the age of 21 by Allen, but said: ‘I wasn’t the one who went after Woody – where would I get the nerve? 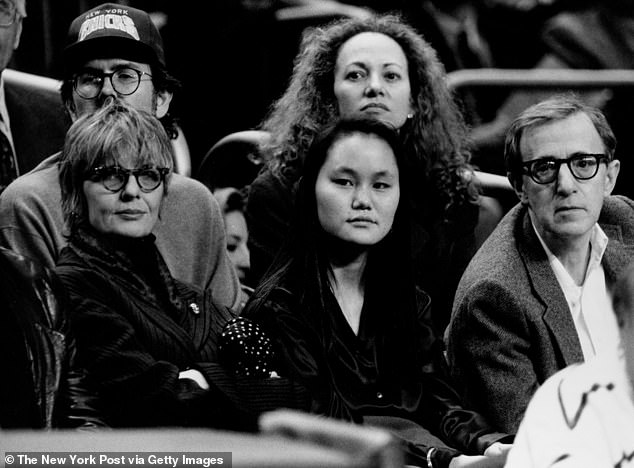 Previn said she and Allen fell in love in 1992 and they developed a bond after going to Knicks games together. Pictured, the pair at a Knicks game in 1994

‘He pursued me. That’s why the relationship has worked: He’s usually a meek person, and he took a big leap.’

She declared that she was ‘madly in love with him’ and ‘completely attracted to him, physically and sexually.’

But she also claims that she ‘came to realize how understanding he was’ and that he ‘grew on me.’

Later, she recalls the moment after the pair first kissed.

‘I think Woody liked the fact that I had chutzpah when he first kissed me and I said, ‘I wondered how long it was going to take you to make a move,’ she said.

‘From the first kiss I was a goner and loved him.’

But their first friendly encounter came after she broke her ankle playing soccer in the 11th grade, she said. 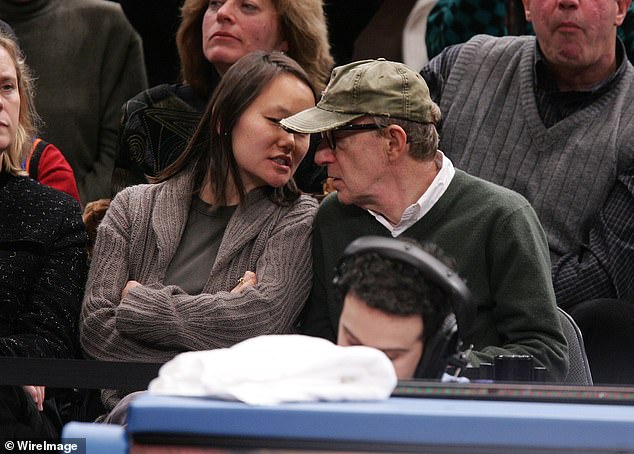 When she got home, Allen looked at her ankle and suggested she see a doctor.

After this incident, the pair began going to Knicks games together.

When they began their ‘fling,’ both planned to keep it a secret and neither thought it would last.

‘It only became a relationship really when we were thrown together because of the molestation charge,’ Previn said.

The comment refers to Dylan Farrow’s allegations that Allen abused her in 1992 when she was seven-years-old.

Allen was investigated but wasn’t charged, and he has long denied inappropriately touching his adopted daughter.

He faced a wave of backlash earlier this year including several prominent actors vowing not to work with him again.

In a statement in January after Dylan’s allegations resurfaced, Allen reiterated his denial and accused her and her family of using the Time’s Up movement ‘to repeat this discredited allegation.’ 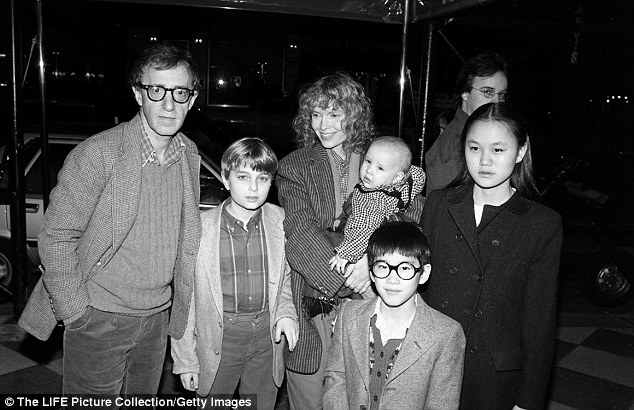 Previn (pictured right, with Allen, Mia Farrow and their children in 1986) said she fell in love in 1992 with Allen, who was Farrow’s boyfriend at the time

The director is also quoted in the New York piece.

‘I am a pariah,’ he said during a lunch with the author.

‘People think that I was Soon-Yi’s father, that I raped and married my underaged, retarded daughter.’

He adds: ‘We weren’t thinking, My God, let’s get married.

‘Our relationship deepened as we went through the barrage of terrible accusations, and the paparazzi forced us to take walks only on my penthouse roof.’

Previn told the magazine that she decided to speak out now because Dylan Farrow, is, in her view, unfairly accusing her husband of sexual abusing her when she was a child.

‘I was never interested in writing a `Mommie Dearest,’ getting even with Mia – none of that,’ Previn told the magazine. 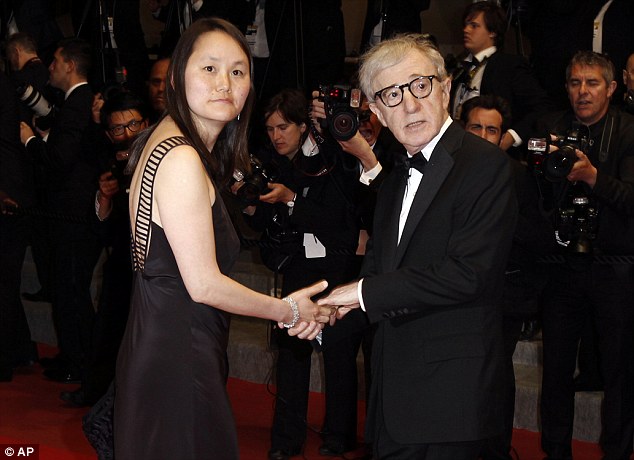 Previn (pictured with Allen in 2010) said she decided to speak out now because Dylan Farrow, is, in her view, unfairly accusing her husband of sexual abusing her when she was a child

‘But what’s happened to Woody is so upsetting, so unjust. (Mia) has taken advantage of the #MeToo movement and paraded Dylan as a victim. And a whole new generation is hearing about it when they shouldn’t.’

Previn also said she and her mother clashed soon after Farrow adopted her and that her mother many times treated her like a maid.

She also said of Farrow: ‘Mia wasn’t maternal to me from the get-go.’

An email sent to Mia Farrow’s agent Sunday night was not immediately returned.

In separate statements posted on Twitter on Sunday night, Dylan Farrow and Ronan Farrow say their mother is a good parent and that the New York magazine article is inaccurate and unfair.