An art student whose anorexia battle saw her rushed to hospital with a failing heart is now a fitness blogger strong enough to deadlift 130kg.

Sophia Ellis, 21, survived on just a single slice of apple a day washed down with diet lemonade while in the throes of the disease, which saw her weight plummet to just 5.5st.

At her lowest point, Sophia says she was vomiting blood up to 14 times a day, after developing an obsession with ‘healthy’ eating in sixth form that saw her drop half her body weight within the space of six months, and ultimately spiralled into anorexia.

The turning point came when Sophia was rushed to hospital after collapsing at work, and warned her heart rate had fallen to a dangerously low 32BPM.

After undergoing treatment at the Royal Maudsley Hospital Sophia has battled her way back to health, and credits her newfound passions for veganism, weight lifting and yoga with helping her do it.

Now Sophia, who has hailed the support of the vegan community as crucial to her recovery, is poised to lift weights competitively – and she’s even set to climb Kilimanjaro for charity.

Art student Sophia Ellis saw her weight plummet to 5.5st when she was surviving on just a single bite of apple each day 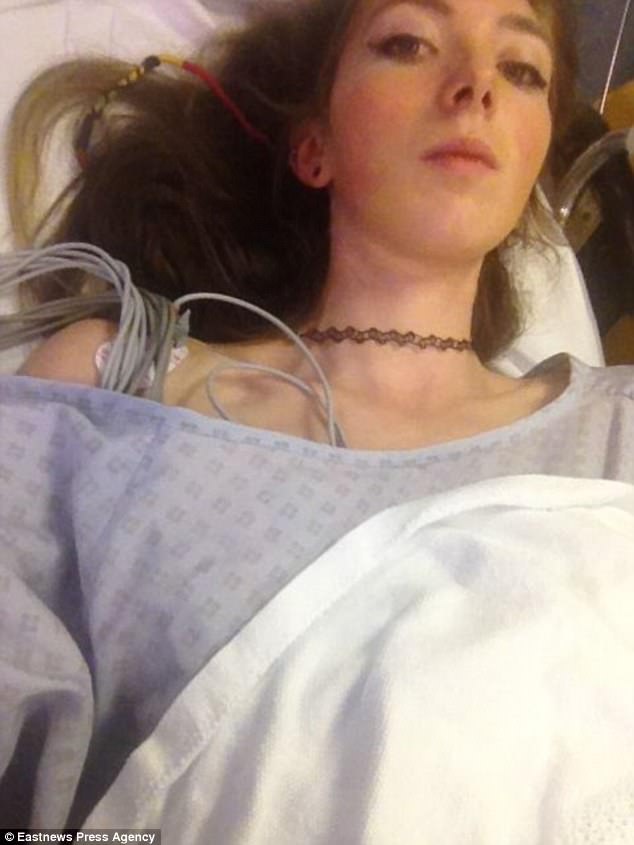 Sophia was rushed to hospital and warned by doctors that her heart rate had dropped dangerously low; to just 32bpm

‘Veganism genuinely helped me build a good relationship with food and for me the support that comes with the community really helps,’ she said.

‘Particularly in London, it’s so close knit everyone helps each other, a lot of people had been through it and they even set up a WhatsApp group to help me.

‘I was vegan for years but it was only when I got into the community and saw how healthy people were that I wanted to put a good light on it and show how positive it can be.’ 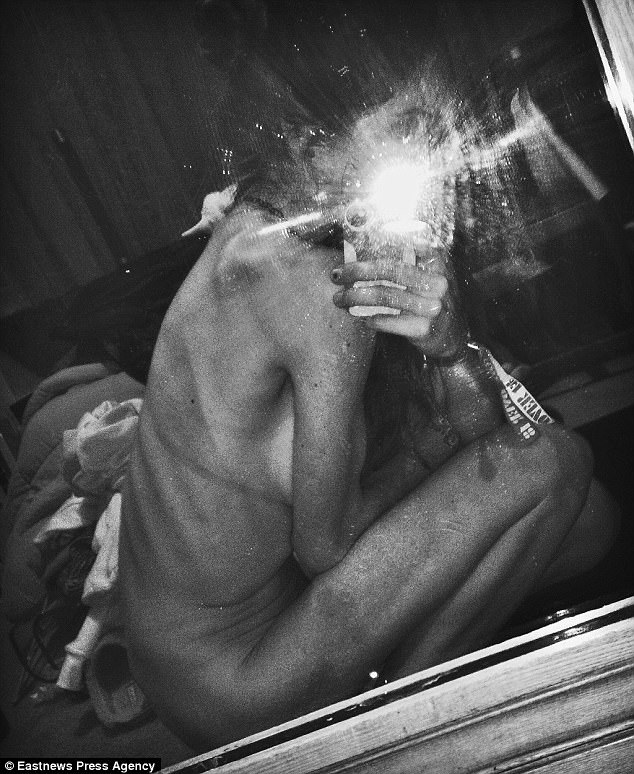 At her lowest weight, student Sophia says she was vomiting blood up to 14 times a day 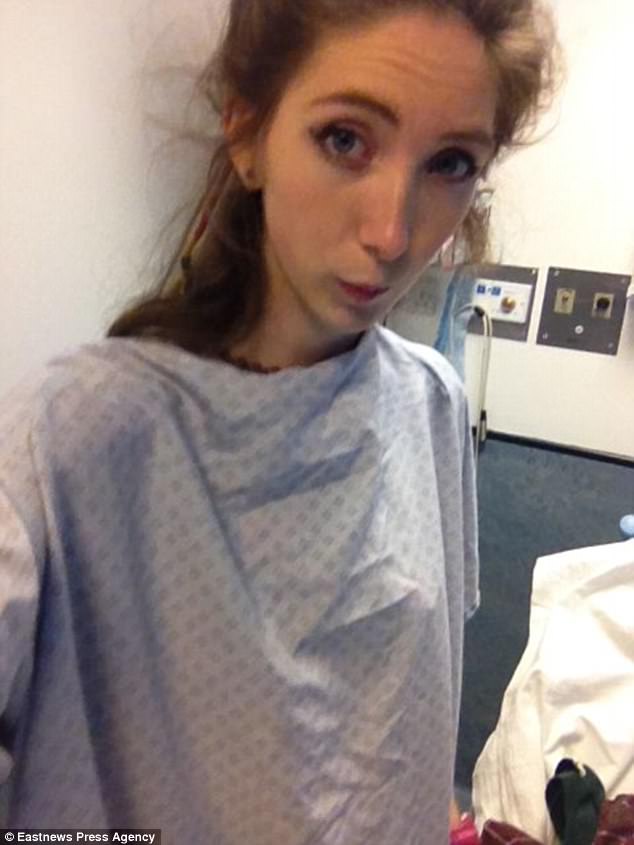 A promising footballer, Sophia’s athletic pursuits fell by the wayside when orthorexia – an obsession with healthy eating – spiralled into anorexia

It’s a huge turnaround for Sophia, who has said she contemplated suicide after moving to Brighton to study in 2014.

She was even forced to turn down an art scholarship to The Institute of Chicago as she fought her demons.

Her battle started when she was coming to the end of sixth form and she developed an obsession with healthy eating – known as orthorexia.

Although the promising footballer started with the best of intentions, she ended up losing half her body weight in just six months. 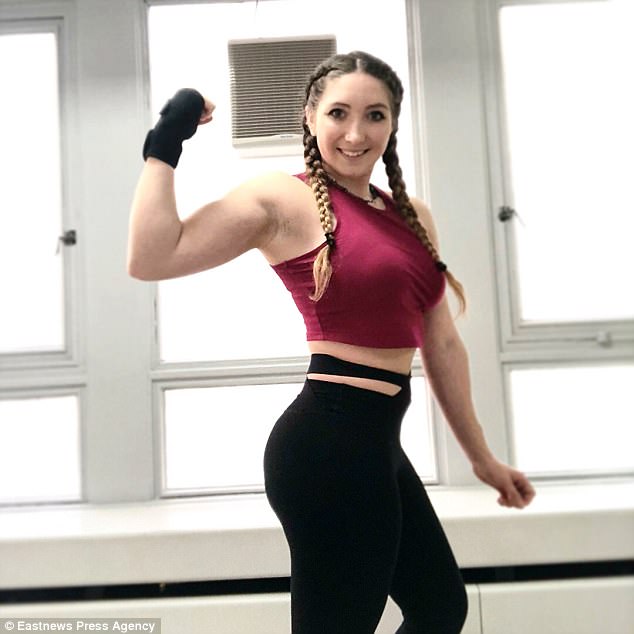 Sophia, who says her illness became ‘completely out of control’ when she left home to go to college, now lift weights and is a yoga devotee

‘I lost it so quickly, I cut down to eating one bit of an apple a day,’ she said.

‘When I went to college in Brighton, it just got completely out of control.

‘I was vomiting 14 times a day and my oesophagus ripped, I was just puking up blood.

‘I was just so isolated and very depressed, it got really bad the binges were just so awful.

‘Things were just getting worse and worse and I ended up having heart problems because I had such a low weight, I kept collapsing.’

It was after she passed out at work and colleagues at the clothing store Superdry couldn’t wake her that she was rushed to hospital and it was discovered that she had a heart rate of just 32 beats a minute.

A normal resting heart rate for adults ranges between 60 and 100 beats per minute.

Doctors attached a heart monitor to Sophia and she was referred to the Royal Maudsley Hospital for treatment while studying at the University of Arts in London. 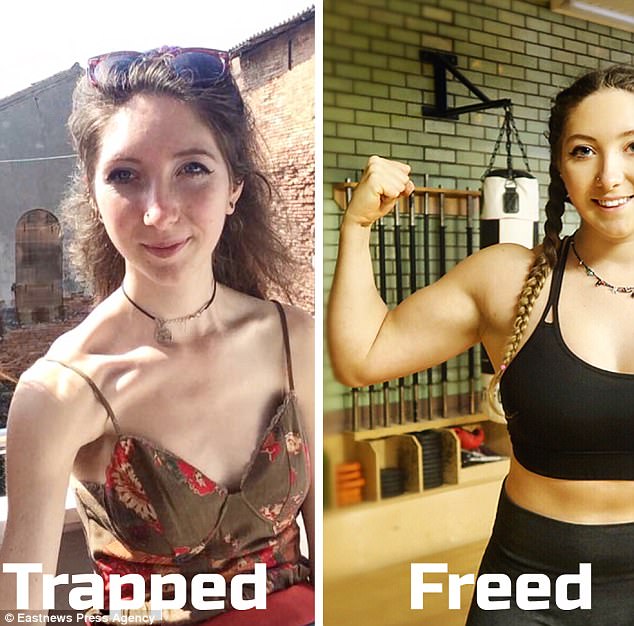 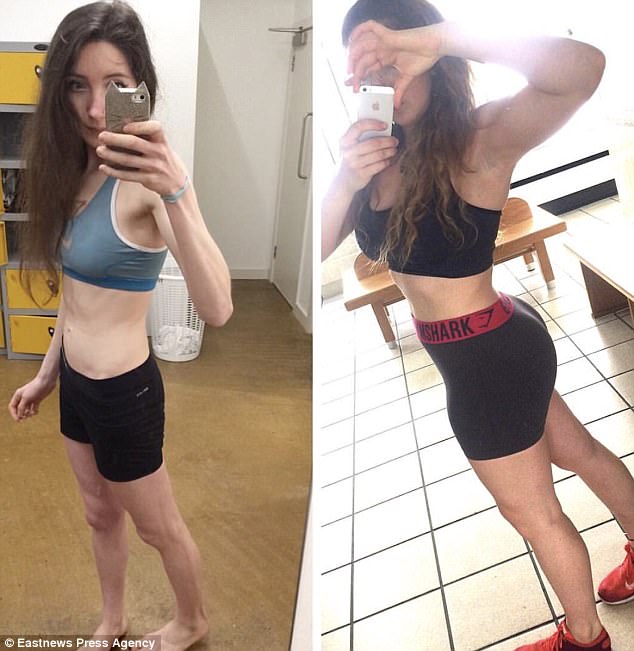 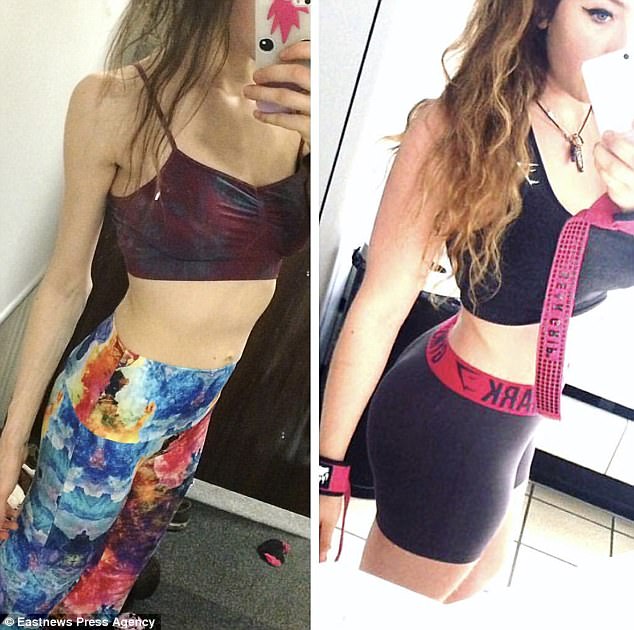 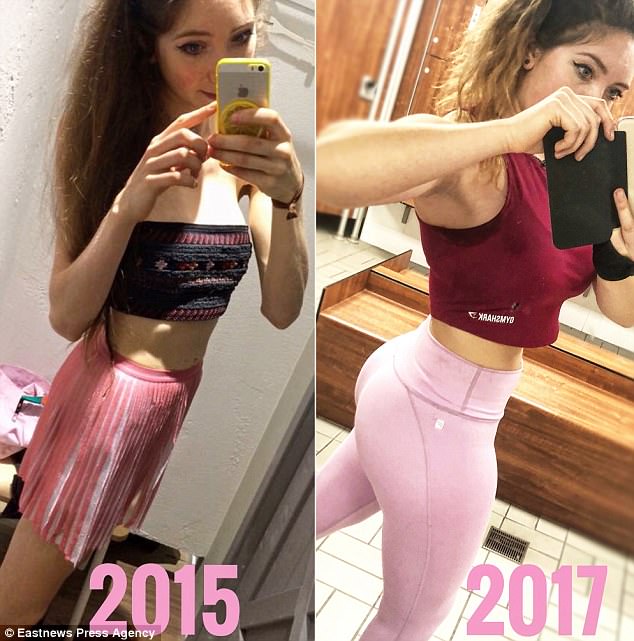 Sophia says of her newfound passion for weight lifting: ‘I just wanted to feel strong again’

After vital help there she started practicing yoga, lifting weights and turning to the vegan community for support.

‘Yoga really helped it makes you feel happy in your own body and with weightlifting I just wanted to feel strong again,’ she said

‘It just gave me such a high doing the weightlifting, but it also got me lean and healthy.

‘I’ve only just started powerlifting but I’ve been encouraged to compete nationally, I just can’t believe it.’

Now Sophia can deadlift 130kg, bench 70kg and squat 100kg – a far cry from her years of suffering.

‘I just want people to know there is a way out for people if they reach out for professional help and value themselves,’ she said.

‘Don’t be scared to talk to people and reach out for support, it’s not a sign of weakness, it shows you want to get better.’