Just weeks before the world went into lockdown, singer Sophie Ellis-Bextor, her teenage son Sonny and her mum Janet set off on their first overseas adventure together to Japan. So would it tighten their family bond… or widen the half-century age gap? They all give their verdict here

Falling into bed, I couldn’t help but smile at my novel and unexpected setup. In the bedroom next to me, my 15-year-old son was catching up with his friends online, while on the other side of the wall my mum Janet, 64, was drifting off to sleep. I was thousands of miles away from my husband Richard and my other four children, but with me were two of the people I love most in the world – two people who just happened to have a half-century age gap between them but get on like a house on fire.

Which is one reason why we were here on holiday in Japan, a happy three-generation crew on our first overseas adventure together. So far at least it was proving a roaring success…

The funny thing is that I wasn’t actually supposed to be in Japan, but had ended up tagging on to a trip planned by Mum. She loves all things Japanese and, together with my stepdad John, had booked a trip for February this year. 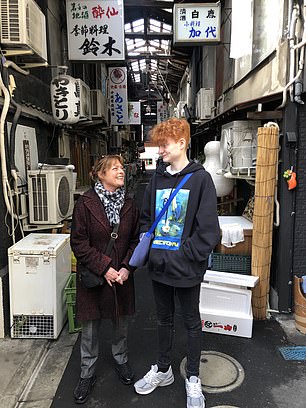 Left: Eating fresh sea urchin for breakfast; Right: Sophie’s favourite photo from the trip – her mum and sonny laughing in a side road

Mum shares her admiration of the country with her eldest grandson Sonny, whose desire to visit has been so longstanding that when he was ten he founded ‘Plan Japan’,a one-boy lobby to get his parents to book a holiday there. Plan Japan proved effective. Two years ago, Richard and I decided we would organise a family trip to mark my 40th birthday – but it was scuppered when I became pregnant with my youngest son Mickey. That’s when Mum suggested Sonny join her and John for the week – he seized upon the idea eagerly, and not just because of the chance to check out Tokyo’s famed Pokémon centres.

Sonny and Mum have always been very close. Sonny was her first grandchild and, although I went on to have four more children who Mum adores equally, she has always made a point of spending one-on-one time with each of her grandchildren. She lives ten minutes from our home in West London so has developed lovely relationships with them.

She and Sonny are not dissimilar. They’re both good listeners and in the grand scheme of our big, chaotic family they’re both pretty chilled. They also like a lot of the same things, from a shared loved of fashion to sushi and cinema.

There’s no doubt too that, much as he loves his younger brothers – Mickey, one, Jesse, four, Ray, eight, and Kit, 11 – Sonny can sometimes find family life noisy and full on. The idea of going away for a more peaceful trip with two grandparents he likes a lot was undeniably appealing. That was the plan anyway, although in Mum’s peripheral vision was the fact that John has stage-four secondary lung cancer. Sadly, as February loomed and his treatment plan changed, it quickly became obvious he wouldn’t be able to go.

By then I had already booked Sonny’s ticket, and Mum certainly didn’t want to let him down and cancel the trip.

That’s when she suggested that I take John’s place. I’ll admit I was intrigued as to what lay ahead. I’ve enjoyed plenty of extended family holidays with Mum, John, the kids and my siblings, but this would be the first time it was just the three of us. And, while Mum and I spend a lot of time together and like many of the same things – there’s only a 23-year gap between us and she often feels more like a big sister – it’s a leap from coffees and dinners to spending a whole week together 24/7.

I needn’t have worried: from the moment we arrived in Japan we all settled into a happy routine, helped by the meticulously planned itinerary John had drawn up for the trip.

A work of art – right down to the times of trains for day trips – it meant that not only were Sonny and I treated to a well-rounded experience of Tokyo, but it felt that John was along for the ride. There was something for everyone too, from landmarks to vintage shops (quite a few of those, actually) to – naturally – Pokémon centres and museums about anime [Japanese animated films], planned specifically to ensure that Sonny’s Japanese passions were catered for.

We wandered happily in unseasonal sunshine through Yanaka, one of the oldest parts of the city. We drank cappuccinos (you’re never far from great coffee in Tokyo) and went in and out of secondhand clothes shops. That was until Sonny reminded us that the Pokémon centre was waiting.

John had also wanted us to get a sense of the wider country beyond and we were delighted to discover that you don’t have to travel far to find it. One of our best outings was to Kamakura, a coastal town less than an hour south of Tokyo and a place of hundreds of shrines and temples. There are so many wonderful memories, yet like all the best experiences, the most treasured moments were personal: Mum and I thrilled at discovering yet another vintage clothing shop, Sonny knowing a mindboggling amount about every anime series ever to leave Japan’s shores, and all of us giggling about the bizarre snatches of music the pedestrian sign at each road crossing plays.

More than anything, though, I loved the chance to spend time together without the demands of daily life. As a mum of five whose days are a frantic rush of dealing with my children’s ever-evolving needs, the opportunity to chat to Sonny without endless interruptions was particularly precious. It’s very easy to let teenagers get lost in the wash – he’s more independent than my others and I’ve sometimes been guilty of leaving him to it – but having this proper separate time was wonderful.

Were there any downsides? Hardly. None of us was thrilled by the very hard mattresses in our Airbnb rental, and I couldn’t shake the occasional pangs of guilt that here I was, enjoying a holiday that should have belonged to Mum and John.

What we couldn’t have predicted, of course, was that shortly after we got home, the coronavirus pandemic would turn all our worlds upside down and separate our happy households. It has made that time together all the more precious – and left us determined that we will do it again.

Janet, Blue Peter presenter turned author, says: ‘Why are you using so much water?’ My eldest grandson was outside the tiny bathroom in our Tokyo apartment, acquainting himself with my daily ablutions. There was plenty he and his mother got to know about me (or were reminded of, at close quarters) over our trip: I’m hopeless with directions and geography, I’m a morning person and I’m not a big fan of Pokémon. When Sophie agreed to my suggestion that she come in John’s place, I was both excited and nervous. John and I have been to Japan a few times and love everything about it – and while we’d both been so looking forward to sharing it with Sonny, the thought of Sophie making up our little trio was equally lovely. We’ve always been close, and although I’ll admit I did ponder whether our usual tranquil relationship would be tested with a teenager thrown into the mix, I didn’t worry for a minute that we wouldn’t have fun. 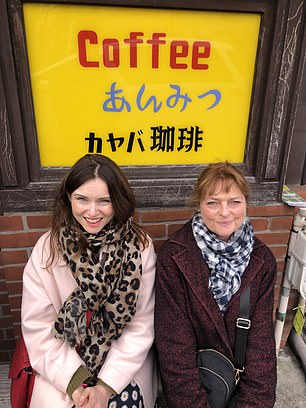 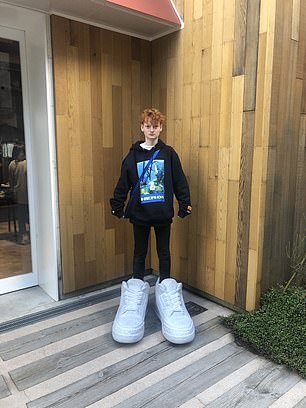 From left: Sophie and Janet stop for coffee; ‘Do my feet look big in these?’ Sonny outside a Japanese shoe shop

What did worry me was being in charge: with several visits to Japan under my belt I was the ‘sole experienced person’, and I felt the weight of responsibility. I’ve got a terrible memory and as the trip approached I pictured us on street corners, map in hand, with me saying: ‘I’m sure it’s round here somewhere.’

In the event, two things came to my rescue in the form of John’s brilliant schedule and my daughter’s apparently inbuilt sense of direction – aided by the satnav on her phone, which she used like a missile-guidance system. When I think back on the trip I picture her, phone in hand, taking us down delightful back routes and past amazing sights. Of course, the other saviour was Japan itself. Sophie and Sonny were dazzled by the sheer energy, and it was a joy to see. They loved the shops (I defy anyone not to go mad in Tokyu Hands, an eight-floored department store that sells just about anything you can think of and plenty of things you couldn’t) and also the myriad quirky, utterly beguiling small places you find on every side street.

Then there’s the food: all three of us are fans of Japanese cuisine and not averse to trying new things. So it was that you could find us eating sea urchins at breakfast, straight from the shell, or sitting down to hot, red-bean-filled buns and cold coffee, fishing for dark-skinned eggs in bowls of steaming ramen and marvelling at the precision and deliciousness of the traditional multi-course Japanese dinner kaiseki. 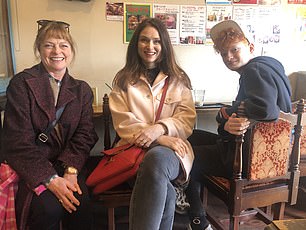 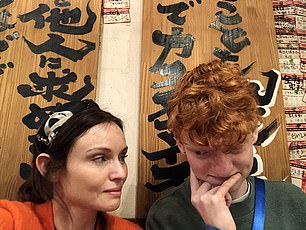 Left: A bubble tea and coffee shop in Kamakura: ‘All three of us are fans of Japanese cuisine and not averse to trying new things,’ says Janet. Right: Sophie with Sonny: ‘It’s easy to let teenagers get lost in the wash, so having this time was wonderful,’ she says

Of course, it wasn’t just the destination that made this trip so special. Sophie and Sonny don’t live far away and we’re often in and out of each other’s houses, but this was the first time for years I’d spent all day, uninterrupted, with either of them… not to mention evenings and first thing in the mornings. It was better and more rewarding than I could have imagined. 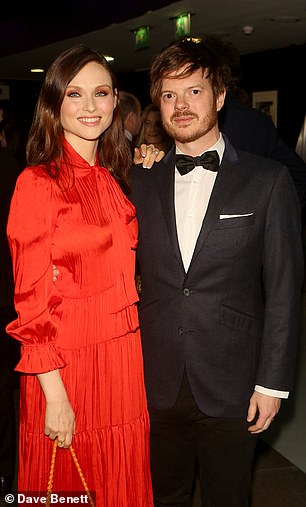 Sophie with her husband, The Feeling musician Richard Jones

Naturally, Sonny teased me about my funny ways (doesn’t everyone splash their face about 100 times when they wash?) and tolerated mine and his mum’s inability to walk past a clothes shop without popping in – although I think he developed an appreciation of our ability to enter, look around and exit without breaking our stride or conversation. In turn, I gazed at countless plastic manga and anime characters and brushed up on Pokémon and Nintendo. Sonny’s a cool 15-year-old and he doesn’t exactly share how he’s feeling all the time, so it was a treat to see him so enthusiastic and relaxed.

It was a treat, too, to spend time with my daughter away from her usual hectic domestic and professional schedule. While she and I speak all the time and go out together a lot, I loved seeing her in a new environment, and in particular witnessing how well she and Sonny get on. It wasn’t easy for me to leave John behind, but Sophie and Sonny really looked after me. Our trip confirmed something I’d suspected all along – these two loving, special people are just as good to be with 6,000 miles away as they are back home.

Sonny says: My Japan trip was amazing. It was so different that it almost feels like it was a dream – especially since it had been a dream of mine. I used to pester my mum and dad all the time about visiting, and we were going to go for their 40th birthday, but due to little Mickey being born we couldn’t make it work. I prefer how it turned out because our family is big, so travelling with them can get stressful at times. I really enjoyed our trip even if my grandpa couldn’t come.