BBC newsreader Sophie Raworth has teased that The Bodyguard’s Julia Montague is still alive, after sharing a snippet of her script from tonight’s finale.

The broadcaster, 50, makes a cameo in the first three episodes of the hit BBC drama, playing herself, and is set to appear again in the last episode.

She added fuel to the suggestions the drama’s Home Secretary, played by Keeley Hawes, is not actually dead, tweeting: ‘I’ve just found my script for the final episode of #Bodyguard ! Julia Montague is….. #nospoilers’

The snippet of her script gave little away, with her first line reading: ‘Vicki, thank you. Just to remind you, today’s events follow…’

BBC newsreader Sophie Raworth has teased viewers that The Bodyguard’s Julia Montague is still alive, ahead of tonight’s finale 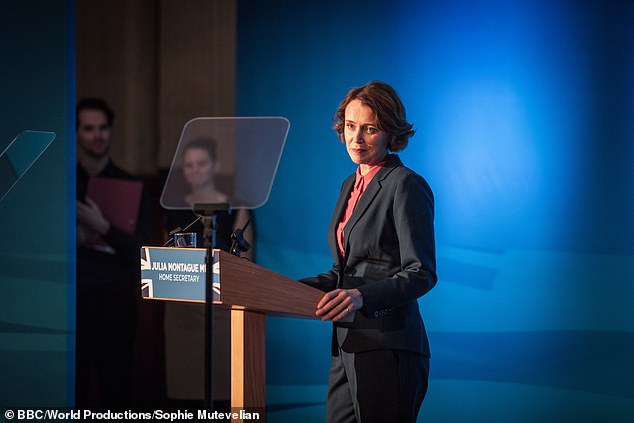 Speculation has mounted over the past weeks over whether Julia is actually dead, after a bomb exploded while she was giving a speech at St Matthews’ College.

Keeley also set tongues wagging after she herself tweeted on Thursday: ‘Is Julia Montague alive?’

Meanwhile, a sneak peek of Bodyguard’s hotly-anticipated finale points to yet another imminent twist in the race to solve the mystery behind Julia Montague’s murder.

Viewers have been glued to the show as police try and unravel the mysterious web connecting the security service, organised crime and a terrorist cell behind attacks on London – one of which killed the Home Secretary in the shocking third episode. 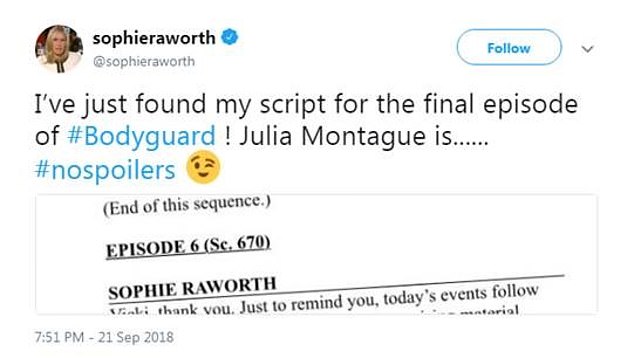 Sophie, who has a cameo in the finale, gave little away with the snippet of the script she shared on Twitter, but teased fans by tweeting: ‘Julia Monatague is…..’

Now a new clip, which aired at the end of BBC’s Newsnight on Thursday, suggests one of their own is about to come under suspicion – Commander Anne Sampson, the Head of the Metropolitan Police’s Counter Terrorism Unit.

She appears incredibly uncomfortable about a new line of investigation into an organised crime leader, Luke Akins, and isn’t pleased that her SO15 officer DCI Deepak Sharma has been taking orders from Montague’s police protection officer – and secret lover – David Budd.

It has led to speculation that she could be the one behind the Home Secretary’s murder.

The show’s creator, Jed Mercurio, has also admitted ahead of the final episode that he isn’t opposed to telling a ‘few judicious lies’ to keep fans guessing right to the end of the gripping drama.

He told the Sun: ‘The thing is, I don’t really feel a great responsibility to tell the truth, so it doesn’t really matter what I say. 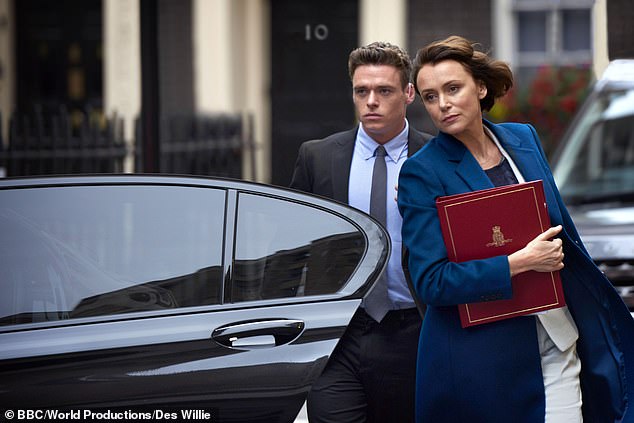 The death of Keeley’s character Julia Montague (above with bodyguard David Budd, played by Richard Madden) was announced in episode four of the programme, but viewers weren’t shown her demise on screen 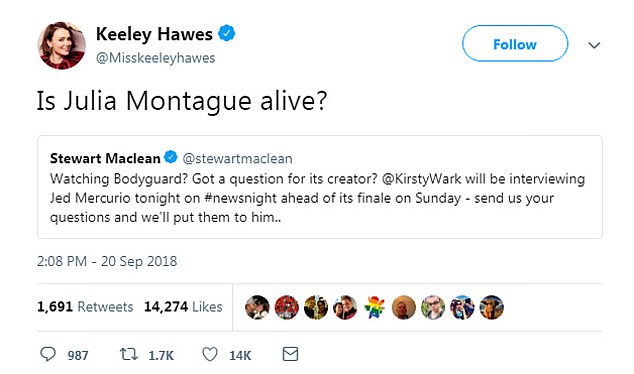 ‘I tell the truth where it’s the ethical thing to do, but in terms of entertainment there’s a certain fun and a certain enjoyment that can be added to the experience by a few judicious lies.’

Referring to his other popular TV series Line of Duty, Mecurio said that he and Keeley – who took a starring role in the police thriller in the third series – had lied before about her appearance and ‘may well lie again’.

Fan theories have been rife that the Home Secretary isn’t actually dead, especially as viewers weren’t shown her demise on screen.

In the new clip DCI Sharma explains that they have been exploring a new line of inquiry to try and solve the conspiracy.

Commander Sampson, the Head of the Metropolitan Police’s Counter Terrorism Command who reported directly to Montague, is clearly blindsided by the information which seemed to implicate her in the attack. 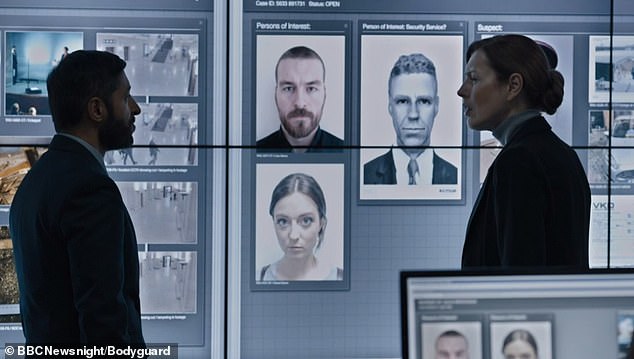 She was clearly unprepared for the information and admonished Sharma for not keeping her in the loop about Luke Akins: ‘Why wasn’t I informed earlier about this new line of inquiry? Who initiated it?!’

Sharma replied: ‘I am acting on information from David Budd.’

Mercurio deftly avoided probing questions about Montague’s state during an appearance on ITV’s This Morning on Wednesday but dropped a big hint about the social media conspiracy theories.

Asked about speculation that Julia’s name refers to Shakespearean character Juliet and whether the Home Secretary will really be alive after the fateful explosion and her death was all a ruse, he alluded to an ‘occasional grain of truth’. 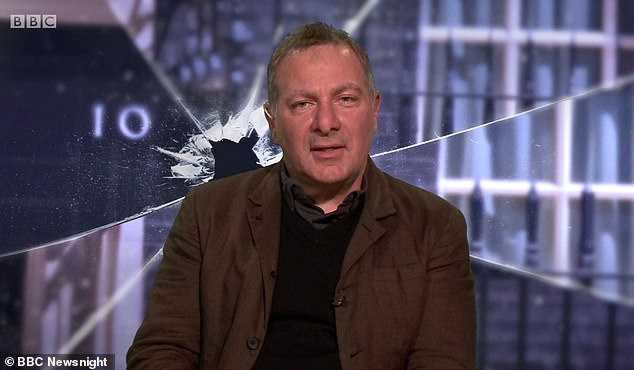 Meanwhile, creator of the BBC hit drama Bodyguard, Jed Mercurio has admitted that he isn’t opposed to telling a ‘few judicious lies’ to keep fans of the show guessing about the outcome 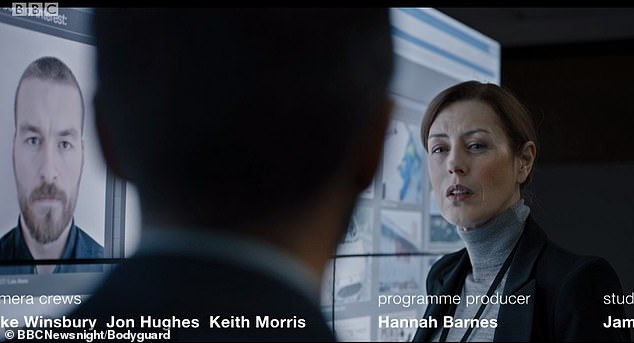 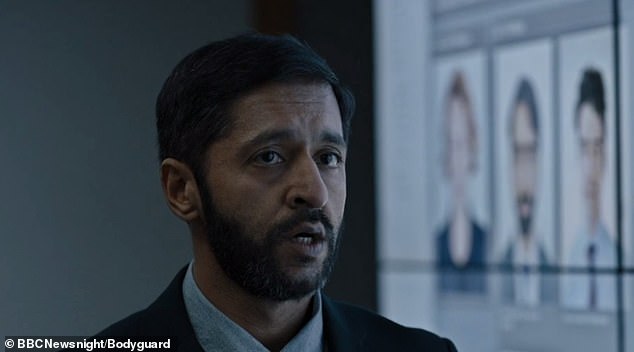 He also defended critics of the hit BBC drama who have claimed it’s not realistic, during an appearance on Thursday’s Newsnight.

‘I don’t mind people saying its drama and it’s not meant to be realistic.

‘But what we have going on is an editorial brief to go out and find people who criticise the show’s accuracy, we went through a rigorous and meticulous process with lots of advisors who came with excellent credentials.

‘What annoys me is when a journalist finds someone who doesn’t have the right credentials but enjoys having the platform of s****ing off the programme.

‘I just wanted to set the record straight on that.’ 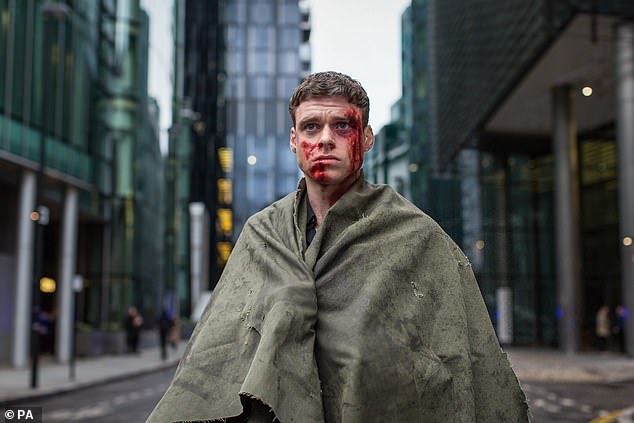