Taking the reins! Sophie Wessex wraps up warm in a brown coat and matching hat as she drives a horse and carriage in the grounds of Windsor

Sophie Wessex looked relaxed as she drove a horse and carriage in the grounds of Windsor Castle today.

The royal, 55, wrapped up warm in black trousers, a brown coat and coordinating hat as she took to the reins.

The Queen’s daughter-in-law – who has two children Lady Louise Windsor, 15, and James, Viscount Severn, 11, with husband Prince Edward, 56 – completed her outfit with a pair of black gloves.

The Countess of Wessex, who was joined by an aide, opted for minimal makeup and wore her brown hair scraped back in a loose ponytail.

Sophie Wessex, 55, looked relaxed as she drove a horse and carriage in the grounds of Windsor Castle today 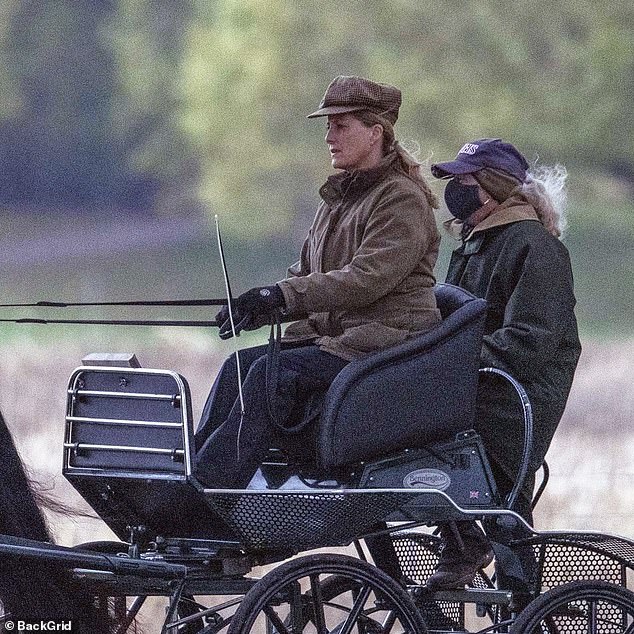 The royal, who was joined by an aide, wrapped up warm in black trousers, a brown coat and coordinating hat as she took to the reins

Sophie and her daughter Lady Louise, who are both avid carriage drivers, competed in the Champagne Laurent-Perrier Meet of the British Driving Society in Berkshire in May this year.

The mother-of-two donned a navy ensemble with a fetching headpiece for the occasion, as she was photographed riding solo through the Windsor grounds.

Lady Louise was taught at a young age, and has inherited a love of carriage driving from her grandfather, Prince Philip.

Philip is believed to have been instrumental in the development of carriage driving and has represented Britain in three European championships and six world championships.

Earlier this month she was spotted having a carriage driving lesson in Windsor’s Home Park.

The 16-year-old daughter of Prince Edward and Sophie Wessex donned a protective face mask as she rode around the lush grounds under the watchful eye of two tutors. 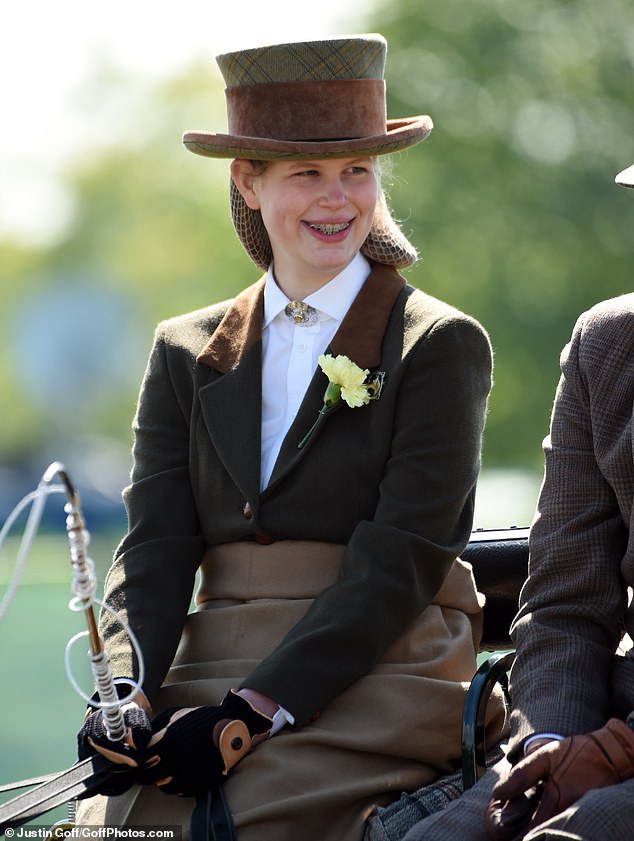 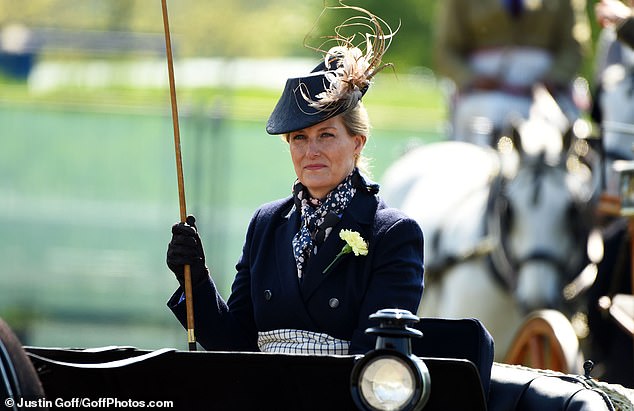 Sophie, Countess of Wessex donned a navy ensemble with a fetching headpiece as she rode solo through the Windsor grounds at the 2019 event

Dressed in blue jeans, brown riding boots and an all weather jacket, Lady Louise looked confident as she took to the reins.

Taking all necessary precautions, she also wore a riding hat while her companion sported a cap reading RWHS – which stands for Royal Windsor Horse Show.

It is not known if the horse pulling Lady Louise’s carriage belongs to Her Majesty, however it did bear a striking resemblance to the Queen’s favourite black Fell pony.

The Royal Windsor Horse Show – one of the Queen’s favourites – did not take place this year due to the pandemic, but its Royal Vice Presidents Edward and Sophie lent their support to its virtual replacement.

Speaking about her daughter’s talent, Sophie – a carriage driver herself – said in May: ‘She is naturally so good at it, she really is. It’s something that she has taken to very well.’

She revealed Louise wouldn’t have taken part in the competition this year as she was meant to have been sitting her exams.

‘It’s a lovely thing to do,’ she added. ‘To actually participate in the horse show you know, has been a really special thing for her to do and in fact, actually, the first time she participated was of course in the pageant, which she adored.’