This footage shows the moment a £200,000 Ferrari 458 Spider was crushed in a scrapyard after it was confiscated from its owner.

Zahid Khan’s supercar was confiscated by police last April as he drove into Birmingham, and officers told him they suspected it had been stolen when he failed to provide paperwork.

He claims police wrongfully crushed the car as he went through the courts to try and prove his ownership – and today he posted a video of the destruction on his Facebook page.

Mr Khan’s problems began after he was exposed as a rogue landlord in December 2016, and was sentenced to 150 hours community service.

When he successfully appealed three of his convictions in March 2017, he parked the Ferrari on the pavement outside Birmingham Crown Court.

Weeks later, his car was seized by police when he was stopped on April 5, and when he attended court in attempt to get it back discovered it had been crushed because police had filed paperwork with a judge to allow them to do so.

Now Mr Khan has posted video of the car’s destruction which he claims was obtained from police.

He said on Facebook: ‘This is my Ferrari the police crushed unlawfully!! It has taken them almost 1 year to release the video, I wonder why?

‘My car was insured, and I was the owner. They went behind my back and removed a court order that was imposed on the car without notifying my self or my legal team, although the police was put on notice that if they were to go court, they had to inform us first.

Zahid Khan  parked his £200,000 Ferarri outside Birmingham Crown Court in March 2017. Weeks later he was stopped by police and his car was confiscated because officers believed it was stolen

‘They failed to return my car so I had no choice to take the officer to court. So we put them on notice to attend court, in return the officer went to court behind our back a few days before the hearing that we arranged with them and removed the car from the court order and destroyed it the next day!!’

‘I saved my ass off to buy this car and it was of sentimental value to me and my family. The police had no right to do what they did and it is very sad!

‘This money could have gone to a good cause, as a Ferrari broken for parts is worth more then the car as a whole! We pay our taxes and In return the officers act like this in a public office!’ 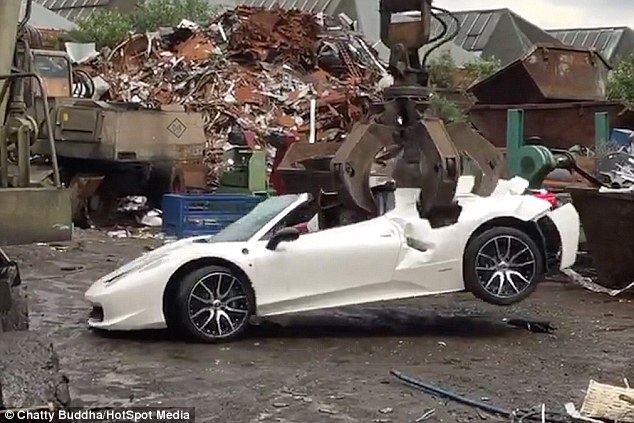 Mr Khan’s Ferrari 458 Spider was crushed as he tried to go through the courts to prove ownership of the vehicle. He posted this video of it being crushed to his Facebook page

The 31-year-old millionaire says he bought his cherished motor from a large auction company. But police crushed it because they say it was found to be uninsured and not roadworthy.

The landlord claimed that he had official Ferrari parts fitted to the car and insisted that neither the vehicle or its fitting were obtained illegally.

Last year, when Khan attended Birmingham Crown Court to show papers proving his ownership, he learned that the Ferrari had been scrapped. 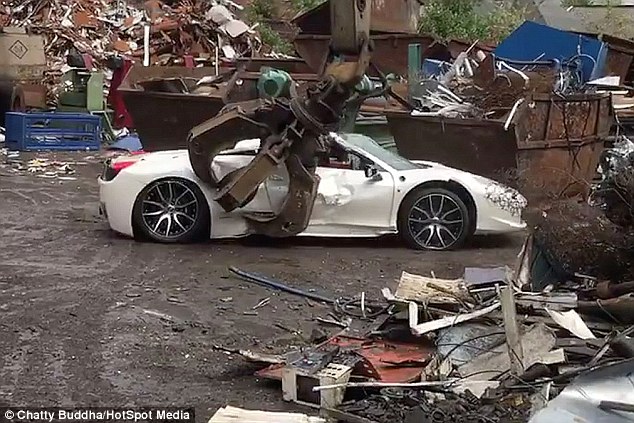 However, the video of it being destroyed has only just emerged.

The Ferrari, which has a top speed of 210mph, can be seen being crushed by a large claw.

Mr Khan said: ‘I can’t believe they have destroyed my car. 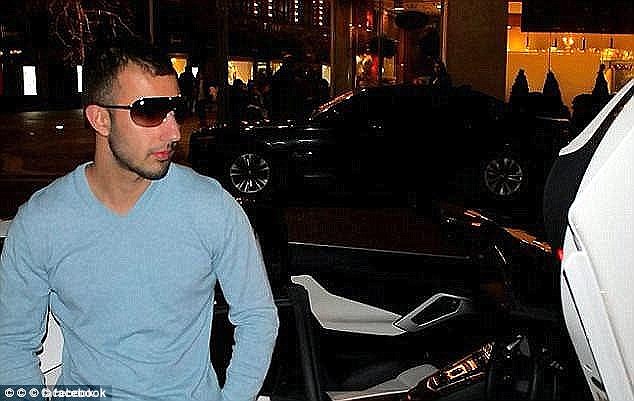 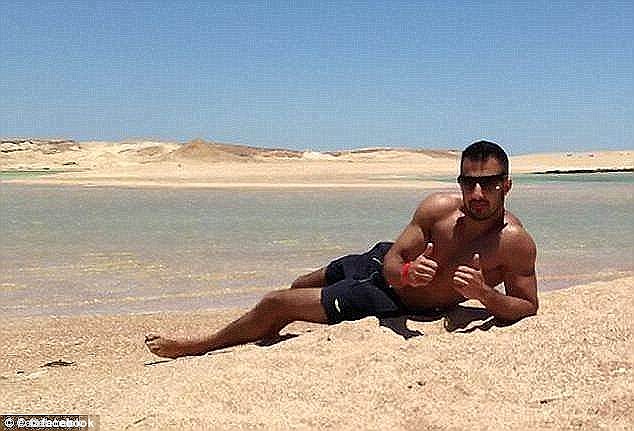 Last year, when Khan attended Birmingham Crown Court to show papers proving his ownership, he learned that the Ferrari had been scrapped

‘I love supercars and have owned a number of them and loved this car.

‘I saved to buy this car, and it was sentimental to me and my family.

‘The police had no right to do what they did, it’s very sad, this money could have gone to a good cause. 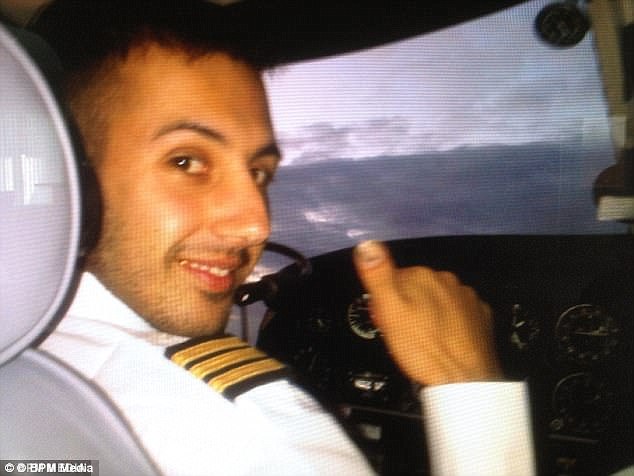 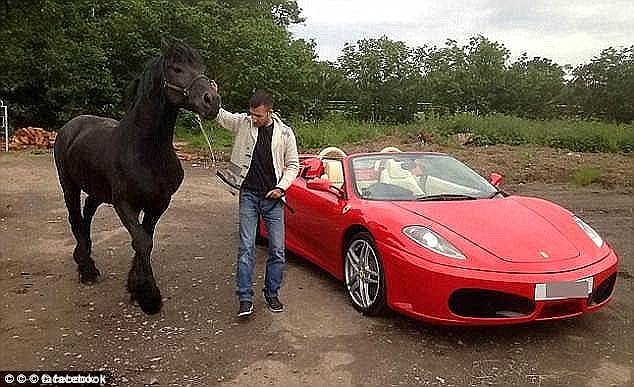 Mr Khan is pictured with another of his vehicles

‘Ferrari parts are worth more than the car itself.’ 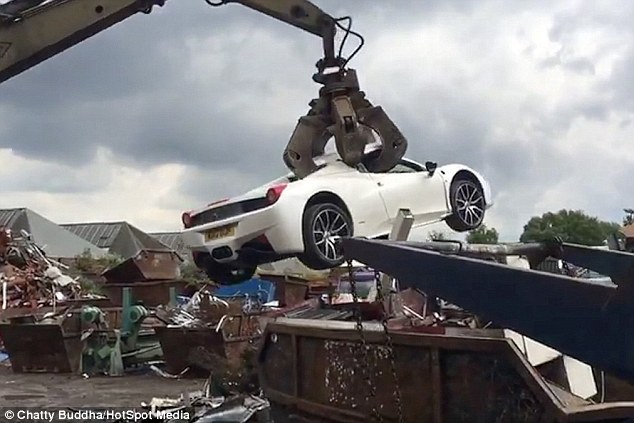 Video footage recently emerged of the luxury car being destroyed

When rogue landlord Mr Khan turned up at court for a hearing about the way he treated some tenants, he ostentatiously parked his Ferrari on the pavement outside.

Three other charges were dismissed, but Khan was told to pay £2,000 on top of £7,500 he had been told to pay previously.

A spokesman for West Midlands Police said that the car was crushed because it had no valid insurance and was a Category B vehicle – which are officially classed as ‘unroadworthy’, meaning it had to be destroyed.

Category B means that the body shell should be crushed as this category signifies extensive damage, although some parts are salvageable.

According to RAC insurance providers the vehicle should never re-appear on the road, although reclaimed parts can be used in other road-going vehicles. 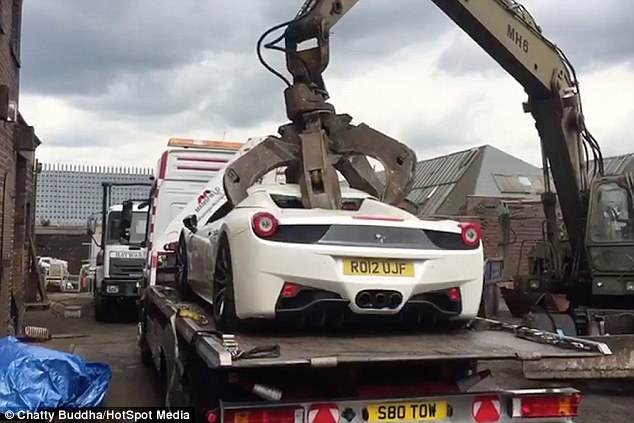