Two South African farmers have been found guilty of attempted murder after they filmed themselves forcing a man into a coffin and threatening to burn him alive.

Supporters of the victim burst out in celebratory songs in the courtroom after judge Segopotje Mphahlele told the accused that ‘for attempted murder of Mr Victor Mlotshwa, I hereby find you both guilty.’

Willem Oosthuizen and Theo Martins Jackson, both white, were also found guilty of kidnap, intimidation and assault with intent to do grievous bodily harm.

They had pleaded not guilty over the incident last year in the eastern province of Mpumalanga, saying they only intended to scare Mlotshwa, who is a black man, after he allegedly stole copper cables from their farm.

Two clips of footage taken on their mobile phones showed the assailants shoving Mlotshwa down into the wooden coffin and pressing the lid closed with their boots as he begged for his life.

Rival activists from the ruling African National Congress, the main opposition Democratic Alliance and the radical Economic Freedom Fighters (EFF) rallied outside court and attended each day of the trial.

When the first phone footage emerged several months ago, it triggered national outrage and led to the arrest of the two men.

‘Please don’t kill me,’ Mlotshwa begged the men while in the coffin, the footage shown.

‘Why shouldn’t we, when you are killing our farm?’ one replied.

Mlotshwa was in court to hear the verdicts against the two men, who had alleged that Mlotshwa had threatened to kill their families and burn farm crops before being forced into the coffin. 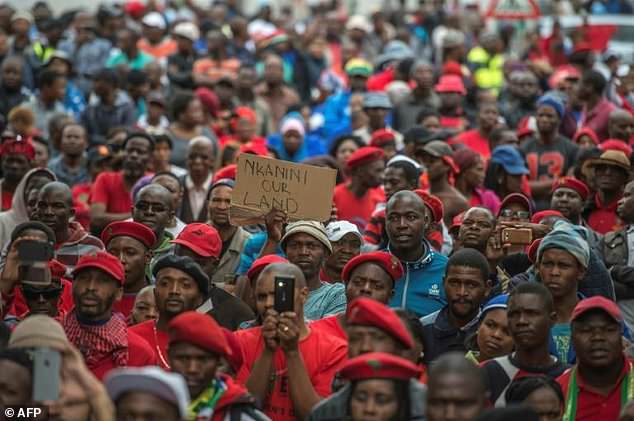 The court case has attracted huge attention in South Africa, where racial inequality persists more than two decades since the end of white minority rule

South Africa is beset by deep-rooted racial inequality 23 years after the end of white-minority apartheid rule, and cases of racism have erupted regularly on social media in recent years.

Outside the court on Friday, protesters carried mock coffins decorated with pictures of the accused and called for them to be found guilty on all charges.

On the phone footage, one of the men said ‘Come, come. We want to throw the petrol on’.

They are also threatened to put a snake in the coffin.

Mlotshwa said he was walking to the town of Middelburg to buy provisions for his mother and had decided to use a short cut when the two men spotted him.

The two men’s families told local media they were shocked over the verdicts.

The sentencing date was to be set by the court later Friday.

‘The fact that the whole grotesque episode was captured on video and then posted to social media suggests that the perpetrators felt little concern that they would face justice.

‘There is no place for racism or discrimination in any society, and this terrible case must spur the government to finalise the Hate Crimes legislation in order to deal decisively with incidents of discrimination.’