In-car video shows the moment a racing driver must jump from his vehicle before it bursts into flames on a race track in South Africa.

South African racing driver Mike Schmidt was taking a practice run on the Dezzi Raceway when his car suddenly became engulfed with fire.

Video shows how the 55-year-old driver was forced to act quickly, releasing his seat belt so that he could exit the Volkswagen’s cockpit.

Pit crews at the race track, in the Ugu district of South Africa’s eastern KwaZulu-Natal province, rushed to the scene and tackled the blaze with extinguishers.

No other cars appeared to be in front of him at the time of the incident, which occurred last Friday.

Mr Schmidt, who was uninjured, told racing media that a broken fuel line splashed fuel on to a hot part of the engine and caused the fire.

He said: ‘Fire is probably a race driver’s worst fear. I was just starting my first flying lap of practice on Friday morning when the engine died unexpectedly and the next thing I knew was that I was literally sitting in a fire pit with flames all around me.

‘I managed to stop the car quite close to the pit wall and members of my team along with some of the other teams’ members managed to get the fire extinguished.’

Racing driver Mike Schmidt had to react quickly when his car suddenly bursts into flame, pictured, on the Dezzi Raceway in South Africa 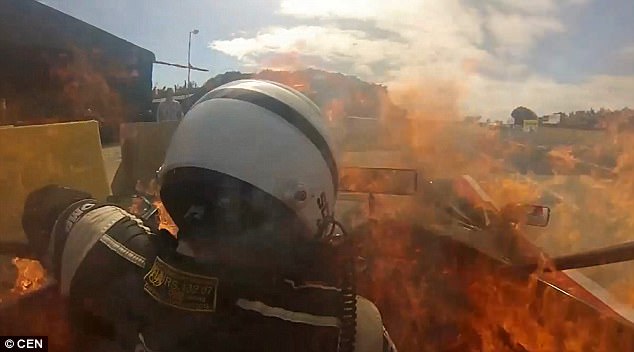 Mike Schmidt said that a broken fuel line splashed fuel on to a hot part of the engine and caused the fire which engulfed his vehicle in flames, pictured 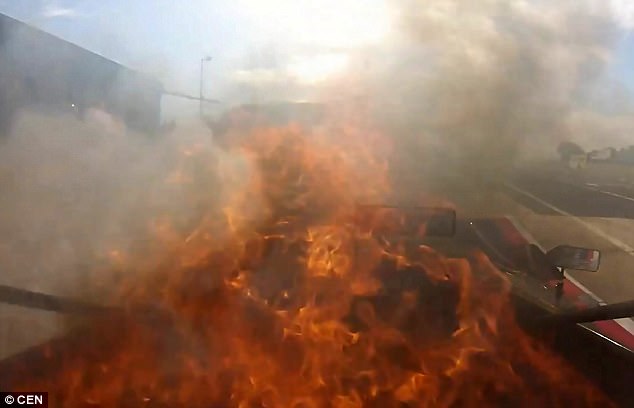 Mike Schmidt, who is an experienced racer, says fire is one of his worst fears. His inflamed vehicle, pictured, was surprisingly repaired the following day .

The damaged car was repaired and raced the next day.

Mr Schmidt was competing in the Mopar South African Endurance three hour race. His team finished first in their class and fifth overall.