Sibongile Mani, 27, poses with a new bag on her arm after receiving the bonus funds

A student who received a staggering £850,000 instead of her usual £85 monthly university food grant is in hot water after going on a massive 73 day spending spree with her pals.

Accountancy student Sibongile Mani, 27, who was on benefits to allow her to study was said to have undergone a Cinderella like transformation overnight after the cash blunder.

Student leader Sibongile who is at the Walter Sisulu University in Mthatha, Eastern Cape, South Africa, gets £85 (1,400 Rand) each month put into her bank account in food and book allowances.

But instead the company that administers the financial aid allowances at the university called Intellimali fouled up and sent £850,000 (14million Rand) in cash to the hard up student.

Eyebrows were raised initially when her neat corn-row hairstyle was replaced with £180-a-time Peruvian weaves and she began wearing designer outfits and bought a brand new i-phone 7.

She began flashing the cash kitting out her closest friends with new outfits and drinking £50-a-time bottles of whisky and jetting herself and her pals round the country to wild parties.

Suspicions grew when a till receipt from a local SPAR shop was leaked showing that she he had more than £800,000 in her account and her wild spending became more lavish and talked about.

She was finally outed by Samkelo Mqhayi, deputy branch secretary of the South African Students Congress (SASCO), who reported her to the National Students’ Financial Aids Scheme.

He told Herald Live: ‘She threw surprise birthday parties for her friends and showered them with expensive gifts and flew them to events where she bought the best seats.

‘When the SPAR receipt was leaked showing a balance of R13.6-million in her account I called NSFAS and they checked their records and confirmed that the initial amount was R14-million’. 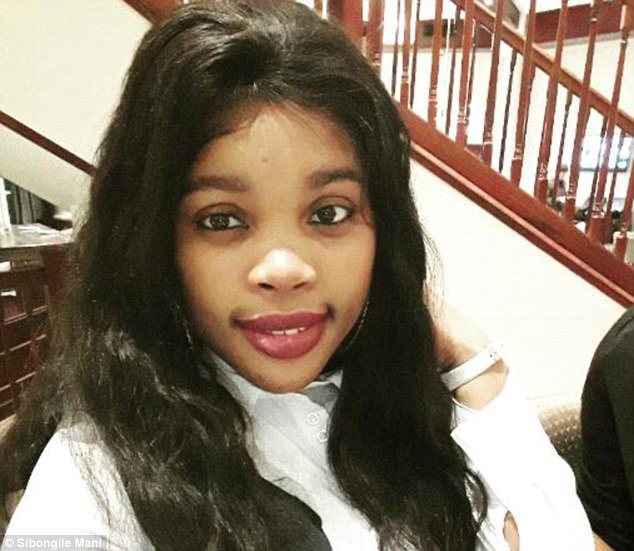 By the time they reigned her in after her two-and-a-half-month spending spree they discovered she had been blowing £666 a day which is a staggering amount in South Africa.

A fellow student said: ‘She went from a hard up, humdrum run-of-the-mill student to one who was leading a lavish lifestyle and seemed to have no bottom to her purse and lived the high life.

‘She became very glamorous in beautiful dresses with all the accessories and we thought she must have won the Lottery.

Would you have spent the money?

‘She must have thought she had won it too when she got that cash.’

SASCO branch chairman Zolile Zamisa told Herald Live: ‘We are shocked. Not so long ago we were protesting for thousands of students who were left without funding due to fund shortages.

‘Yet she was living a lavish lifestyle hosting birthday parties for her friends at up-market champagne clubs and other expensive hangouts. This cannot be allowed to happen again’.

She said: ‘Today my personal life has become a social media scandal. I have been named and shamed in public.

‘Today, I am a bad person, a person who stole the money of students.

‘With that being said, and being named a thief, but as we all know in every story there is truth and there are lies with the very same story’.

She said she was not denying anything but would tell her side later but she has fled the campus and gone into hiding and shut down her Facebook page. 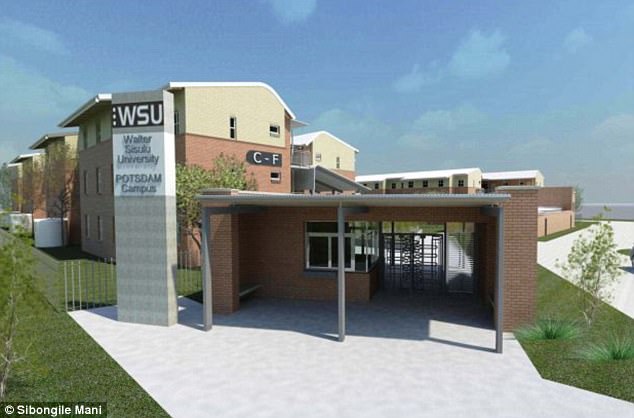 Student leader Sibongile who is at the Walter Sisulu University (pictured in artist’s impression) in Mthatha, Eastern Cape, South Africa, is meant to get £85 each month put into her bank account in food and book allowances

Miss Mani told the Daily Daily Dispatch: ‘It is very clear that I didn’t make the error.’

Walter Sisulu University spokeswoman Yonela Tukwayo said the payment did not affect other students saying: ‘All students who were due to receive NSFAS payments got them.

‘She will have to repay the money’.

Intellimali chief executive Michael Ansell said: ‘Legal action will be taken against the student. A forensic investigator had been appointed.’

The university has 30,500 students of whom 18,000 are funded by the NSFAS who are meant to spend their monthly grants on food and books.

Legal experts have said Miss Mani could face a charge of theft.