Dan Biggar had said success over South Africa in Pretoria would be ‘one of the best Wales victories in the modern era’ and Wayne Pivac’s side were within minutes of delivering just that.

Wales came so close to a first win on Springbok soil, but in a truly remarkable Test match they were beaten at the death as three late yellow cards proved costly.

Defeat – via Damian Willemse’s penalty – was beyond cruel. It was heartbreak of the highest order.

Wales had victory in their grasp and were level with the world’s best side with just two minutes to go only to be undone at the death.

Wales, frankly, deserved better for what was a heroic display.

But South Africa aren’t world champions for nothing and Willemse won them the game at the death, although it was hard to escape the feeling Georgian referee Nika Amashukeli had lost control of the contest by the end.

In a Springbok cauldron, and after a minute of silence in memory of the great Phil Bennett who died last month, Wales couldn’t have wished for a better start.

South Africa’s No 8 Jasper Wiese dropped a high ball. The home side then lost a line-out.

Their opening was sloppy and Pivac’s side took advantage.

Will Rowlands led the breakout after stealing the line out, and once Wales spread the ball back right, they sensed an opportunity. It was executed brilliantly.

Gareth Thomas’ offload was superb and after Rowlands and Kieran Hardy got involved, George North and Liam Williams helped put Rees-Zammit into space. His electric pace meant he was always going to make the corner, and his score stunned a packed Loftus Versfeld.

Biggar couldn’t convert, but bloodied by the scars of battle, he then stepped back into the pocket to nail a brilliant long-range drop goal which had to be given by TMO Joy Neville.

Scrum-half Hardy’s early box-kicking – save for one charge down – was excellent.

Jantjies’ first penalty effort – after South Africa won a scrum penalty – rebounded off both posts, but his second was successful. Wales, nonetheless, were more than in the battle.

Biggar nailed a fine penalty goal and, when Jantjies tried to respond, the man picked with Handre Pollard absent missed a simple kick and then booted a kick to touch dead.

It only served to further fuel Welsh fires.

‘That’s the hammer,’ quipped Biggar, his blood pumping. Jantjies’ poor first half then continued when he bizarrely chose to kick away possession in a prime attacking opportunity.

And then, in barely believable fashion, it got even better.

Wales hooker Ryan Elias thew long from a line-out. Nick Tompkins and Jantjies competed for possession, but the ball fell loose. Rees-Zammit hacked on to score. Biggar nailed the kick. 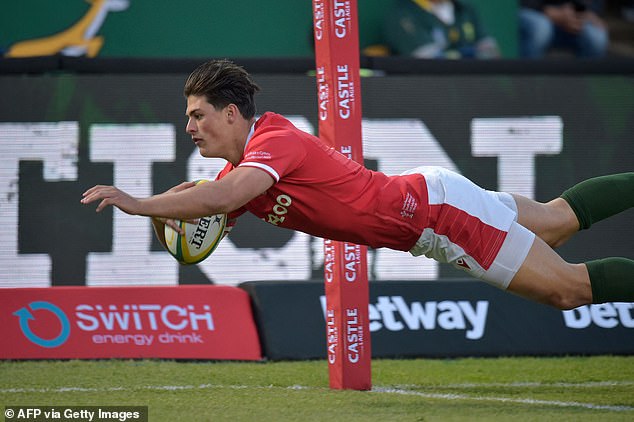 Biggar produced a try-saving tackle on De Klerk but after doing so, was yellow carded for slowing down the ball. Even without their inspirational captain, Wales stopped the home driving maul.

A 15-point half-time lead was beyond Welsh dreams.

Jantjies’ horrors show saw him ruthlessly replaced at the break in favour of Willie le Roux.

Willemse moved from full-back to 10 and immediately missed touch. 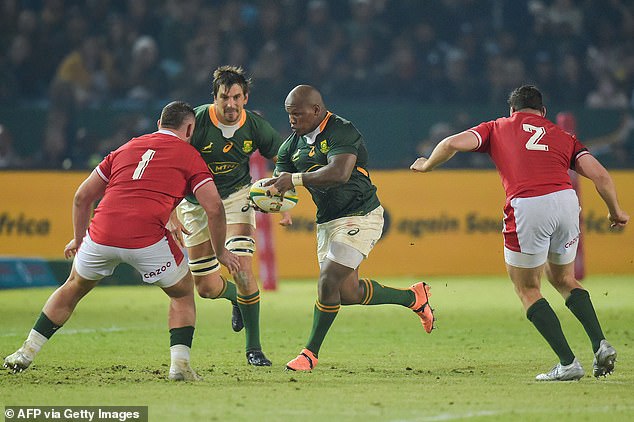 Still, South Africa finally clicked into gear. They kicked to the corner, after Wales overplayed in their own half and coughed up the penalty  and an unstoppable line-out drive ended with Bongi Mbonambi crossing the line. Willemse converted.

All of a sudden, the momentum had switched.

Biggar, back on the field, collected a high ball. He was smashed and penalised for holding on.

Wales replacement prop Tomas Francis, just minutes after coming on for Dillon Lewis, was then knocked out when attempting to tackle South Africa substitute Steven Kitshoff. 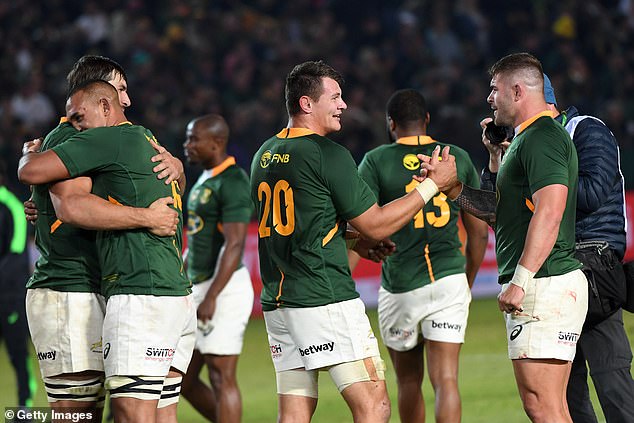 It was another worrying head knock for Francis who suffered a similar incident against England in the Six Nations. Lewis returned to the field in his place. South Africa’s ‘bomb squad’ had also arrived.

After a long stoppage for Francis’ injury, one of the Springbok replacements Malcom Marx was immediately driven over.

South Africa had finally got on top in the physical exchanges, but Willemse didn’t convert Marx’s effort and Biggar kicked a penalty from the restart for a six-point lead. 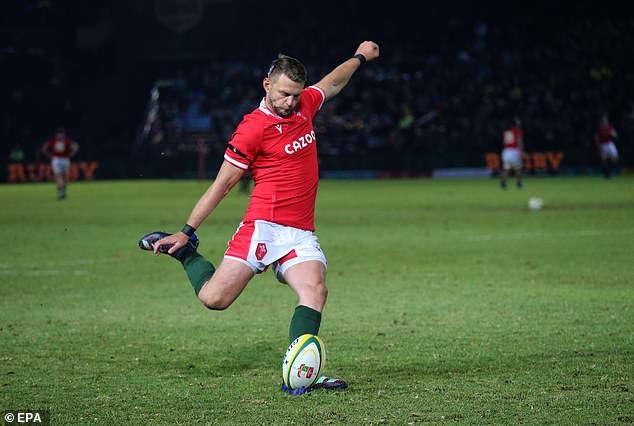 South Africa still couldn’t click. De Klerk kicked dead and then out on the full.

Both teams had unloaded their benches.

Crucially, Alun Wyn Jones was yellow carded for an offence in the build-up to Kolbe’s try.

Wales’ poor discipline was doing them no favours, but it was unclear as to why Jones was given 10 minutes in the sin bin. It was a crucial moment as it left Wales with 14 once again. 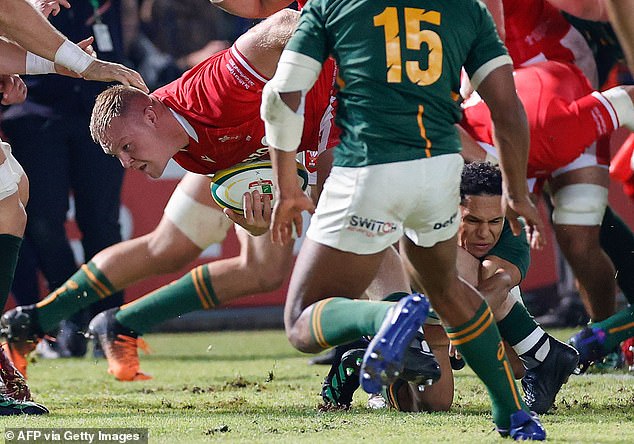 Initially their resolve was immense, but Rees-Zammit then followed Jones to the sidelines after tackling Le Roux and then not releasing the South African in the tackle.

With Wales down to 13, a fourth South Africa try was inevitable.

It came via a penalty score and Rhys Carre was also yellow carded for his part in illegally trying to stop it. Carre departed as Jones returned, but the game looked up. 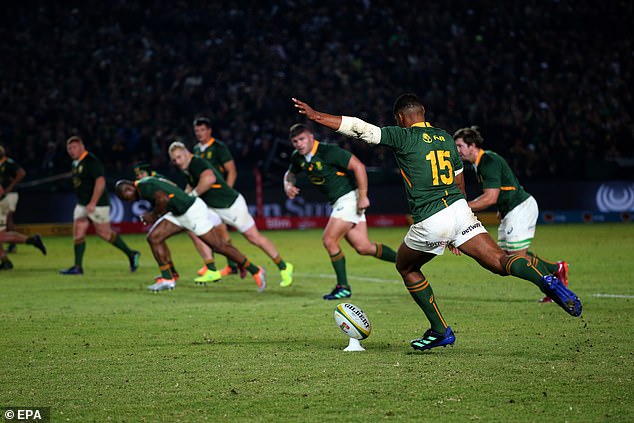 Unbelievably, Wales managed one last salvo. Replacement hooker Dewi Lake was driven over for a third Welsh try which tied the scores.

But Biggar couldn’t convert and his team suffered late heartbreak.

And to make matters worse, it was Biggar who was penalised for a deliberate knock on and Willemse did the rest, thereby ending Welsh hopes of a historic win.