Drug users have been urged to not take methamphetamine or cocaine before driving their children to school.

A new ad released by South Australia Police warns meth users that they risk being caught with drugs in their system within 24 hours of consumption.

The confronting poster shows a woman in the drivers seat with smoke surrounding her while a child is in the back seat.

‘Meth can stay in your system for at least 24 hours, maybe longer depending on the individual, and even the slightest amount detected can cost you your licence,’ the ad read.

‘Get caught at the school drop off, long after the high is gone.’

It is the second targeted ad South Australia Police has released within weeks warning drug users that they will be caught while driving under the influence.

A video advises drug users to not get behind the wheel because ‘even the smallest amount detected will cost your licence’.

‘Drug drive and you’ll get caught, long after the high is gone.’ 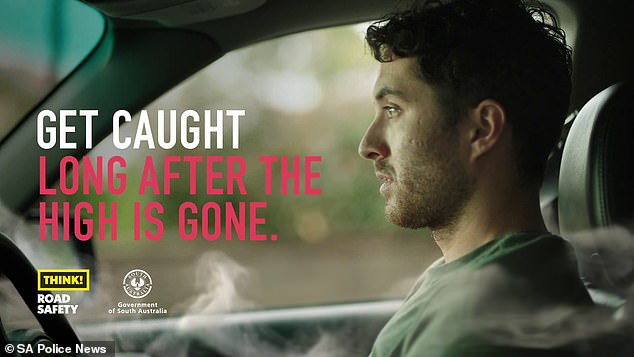 Drug drivers face a large fine of $587 with an immediate loss of their licence for more than six months. Repeat offenders will see their fines increased.

The death rate involving meth was four times higher in 2017 compared to 1999, according to the Australian Institute of Health and Welfare.

Social media users commended the ad with as they slammed drug users for putting others at risk.

‘It’s a sad state of affairs when this needs to be advertised,’ one person wrote.

‘Sickens me that druggies and drunks still drive round with their kids in the car, no regard for their own children so there is less than zero thoughts to anyone else,’ another wrote.

‘Meth is the worst and the most disgusting drug out there.’