By Levi Parsons and Max Aldred For Daily Mail Australia

The heartfelt concession speech by outgoing South Australian Premier Steven Marshall was rudely interrupted when a pub-goers appeared to give ABC viewers the middle finger.

Eagle-eyed Twitter users pointed out that a red-haired woman at the pub where the Liberal leader was making his address from after losing Saturday’s state election, made the crude gesture in the background.

But others online argued the woman seen giggling alongside a blue-haired patron, was merely merely scratching her face.

‘Flame-haired woman in the background giving Marshall the bird throughout his concession speech. Priceless. Why is he doing it at the pub?!’ a Twitter user wrote.

Another said: ‘The pub smoking room was an interesting backdrop choice. This woman spent most of the speech giving the middle finger and the fella on the left kept dozing off.’

In South Australia’s election Labor surged to victory in the with a 41-year-old father of three known for showing off his ripped physique on social media set to become the new premier.

Peter Malinauskas, who was previously the state’s health minister in 2017, will take over from Liberal leader Steven Marshall who is at risk of losing his own seat after a massive swing away from the government in Saturday’s vote.

The crushing victory is a major set back for Scott Morrison ahead of the federal election expected to be come in May, with pre-election polling mirroring South Australia predicting the Coalition will be given the boot by voters. 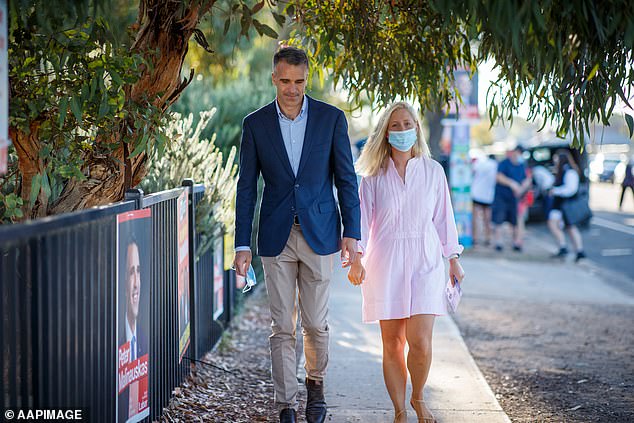 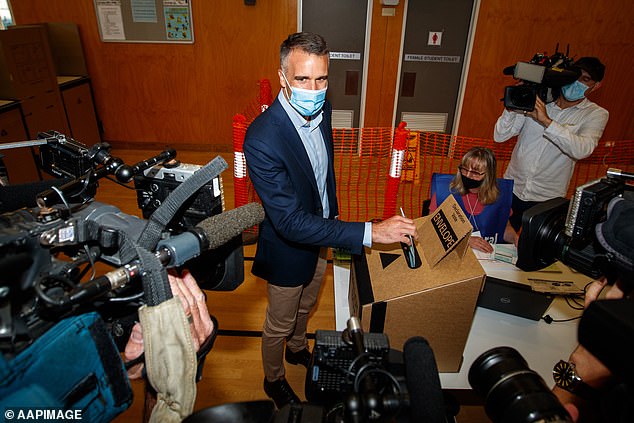 Mr Malinauskas paid tribute to the outgoing state leader calling him “utterly generous, gracious and a man with ‘class’.

‘I think sometimes on election nights when governments change hands, that the successful party can confuse the elation of electoral success with an inflated sense of achievement,’ the election winner said.

‘Naturally, people of South Australia and Labor are right to feel satisfied tonight. But true satisfaction for us comes in realising our ambition, ideal of delivering a fairer, better society and more opportunity for those who need it most.’

Labor’s key to victory was secured by an early swing across marginal seats in metropolitan Adelaide.

With 24 of the 47 seats now called, Labor’s primary vote is up close to eight per cent in the metropolitan area and slightly less on a statewide basis.

The party appears to be attracting many voters who supported Nick Xenophon’s SA-BEST party at the last election. 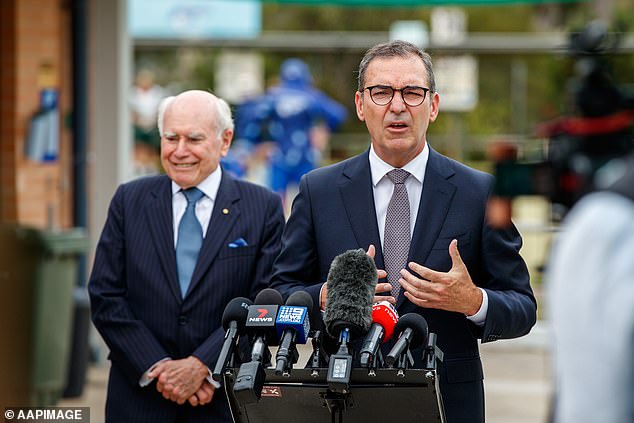 Labor has surged to victory in the South Australian state election with a 41-year-old father of three known for showing off his ripped physique on social media set to become the new premier. Pictured: Liberal Party Premier Steven Marshall with former PM John Howard ahead of the vote 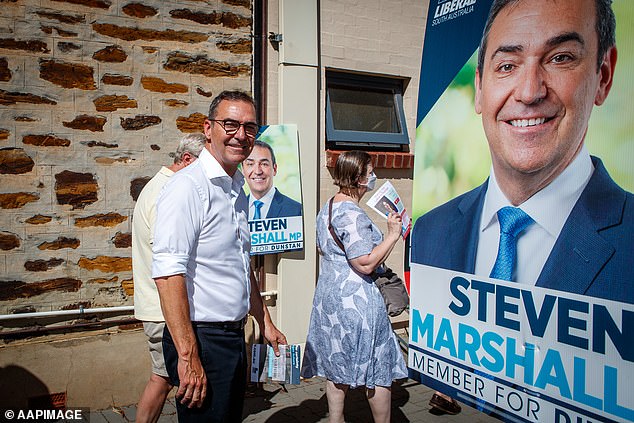 Labor soared ahead in the key marginals of King, Newland, Adelaide and Elder, the four seats considered most likely to fall if the opposition was to win.

According to early figures, statewide Labor had 40.2 per cent of the primary vote, to 35.4 for the governing Liberals.

Key independents Dan Cregan in the Adelaide Hills, Geoff Brock, who shifted to the seat of Stuart in the mid-north, and Troy Bell in Mt Gambier were on track to be re-elected.

Early figures also had Premier Steven Marshall in trouble in his own seat of Dunstan though he was still just ahead.

Putting on a brave face, the first Premier to lose his seat since the onset of the Covid pandemic was graceful and upbeat during his concession speech.

‘It has been an honour and privilege to serve the people of South Australia,’ he told supporters. 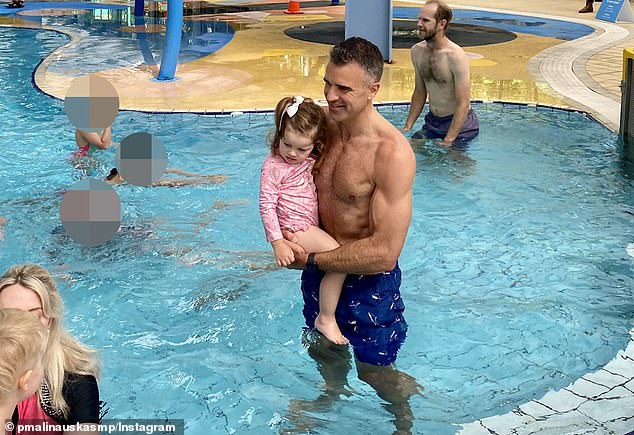 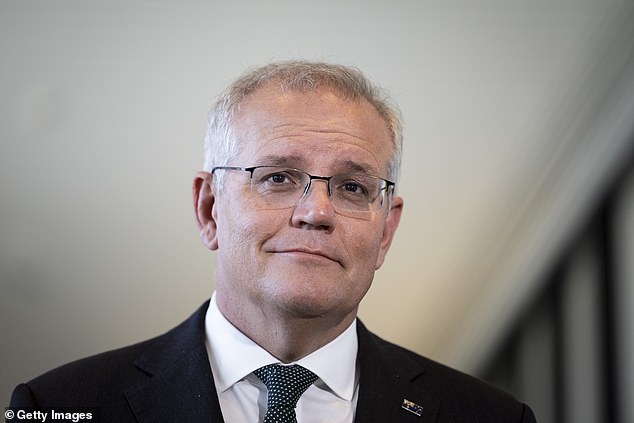 The crushing victory is a major set back for Scott Morrison (pictured) ahead of the federal election expected to be come in May, with pre-election polling mirroring South Australia predicting the Coalition will be given the boot by voters

WHAT DOES THE RESULT MEAN FOR SCOTT MORRISON?

Federal Labor and Liberal figures say there are lessons to be learned out of the South Australian state election contest.

Prime Minister Scott Morrison is poised to pull the trigger on a federal election in coming weeks, with May 14 widely expected to be poll day.

As the SA vote count progressed on Saturday night, it appeared Steven Marshall’s Liberal government was set to lose to the Labor opposition led by Peter Malinauskas after only one term.

A loss would be the first for any incumbent state or territory government during the pandemic.

Retiring federal Liberal MP Nicolle Flint said the party would need to pay attention to the needs of Mr Morrison’s ‘quiet Australians’, who were devastated by issues such as the SA Liberal government’s decision to axe the Adelaide 500 Supercars race.

She said suburban voters, who were already impacted by the loss of car manufacturing jobs and the COVID-19 pandemic, felt the motor race decision was like ‘another nail in the coffin’.

Labor MP Amanda Rishworth said while the Morrison government had talked about jobs, voters in suburban SA had not benefited.

‘The messaging around the economy and jobs has not been as tangible as it should have been out in the suburbs,’ she told Sky News.

‘We have to speak to bread and butter issues – that is the lesson.’

Cabinet minister Anne Ruston said the state election had been fought on issues around health and the Marshall government’s management of the pandemic, not federal issues.

Senator Ruston said when it came to the federal election, it would be fought on jobs and national security.

She rejected suggestions Mr Marshall should have picked more of a fight with Canberra in order to be seen as a strong leader for his state.

‘I reckon Australians want our governments to work together,’ she said.

One of the key factors in the state election which could impact on the federal result is the shifting of votes from minor parties such as SA Best – led by former senator Nick Xenophon – to Labor, and the strength of the Greens vote.

It could see the defeat of two sitting crossbench senators, Rex Patrick and Stirling Griff.

With the seat of Boothby set to be a key battleground in the federal vote, a swing in the state seat covering that area to Labor will give the federal opposition some heart.