A South Dakota inmate who killed a prison guard during a failed escape has been executed after a hefty last mean of pancakes, waffles and breakfast sausages.

Rodney Berget, 56, received a lethal injection on Monday for the 2011 slaying of corrections officer Ronald ‘R.J.’ Johnson at the South Dakota State Penitentiary in Sioux Falls.

Berget beat his victim with a pipe and covered his head in plastic wrap during a failed prison escape on the guard’s 63rd birthday. 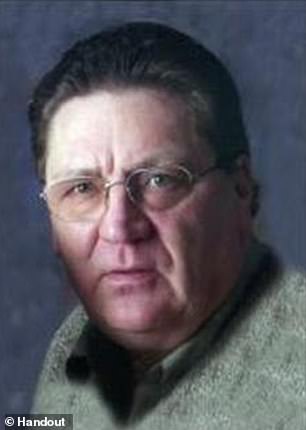 Rodney Berget, 56, (left in 2011) was executed on Monday for the 2011 slaying of corrections officer Ronald ‘R.J.’ Johnson (right) at the South Dakota State Penitentiary in Sioux Falls

His execution was delayed for several hours while the U.S. Supreme Court weighed a last minute legal bid to block it.

Berget joked in his last words about the wait, saying: ‘Sorry for the delay, I got caught in traffic.’

He was soft-spoken and appeared emotional as he thanked people for their support and mentioned two by name.

‘I love you, and I’ll meet you out there,’ he said while appearing to give a peace sign with his left hand.

After the administering of the drug started at 7.25pm, Berget groaned and pushed out his chest. He drifted off and snored briefly before his eyes closed. He was pronounced dead at 7.37pm.

Johnson’s widow, Lynette Johnson, was there to witness the execution and said her husband experienced ‘cruel and unusual punishment’ but Berget’s lethal injection was ‘peaceful’ and ‘sterile’. 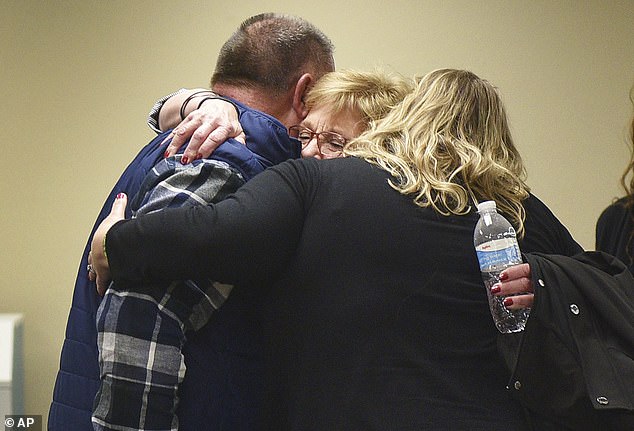 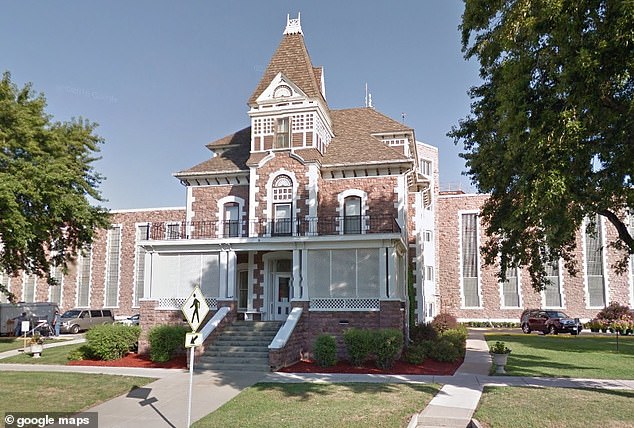 ‘What’s embedded in my mind is the crime scene. Ron laid in a pool of blood. His blood was all over that crime scene,’ she said. ‘That’s cruel and unusual punishment.’

She sized down her husband’s wedding ring and now wears it next to her own; she keeps his watch – its hands frozen at the time he was attacked – in a clear case next to photos above her fireplace. 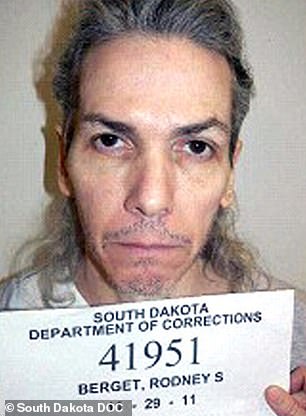 Berget was serving a life sentence for attempted murder and kidnapping when he and another inmate, Eric Robert, attacked Johnson on April 12, 2011

Berget was serving a life sentence for attempted murder and kidnapping when he and another inmate, Eric Robert, attacked Johnson on April 12, 2011, in a part of the penitentiary known as Pheasantland Industries, where inmates work on upholstery, signs, furniture and other projects.

After Johnson was beaten, Robert put on the guard’s pants, hat and jacket and pushed a cart loaded with two boxes – one with Berget inside – toward the exits.

They made it outside one gate but were stopped by another guard before they could complete their escape through a second gate. Berget admitted to his role in the slaying.

Robert was executed on October 15, 2012. Berget’s execution was the state’s fourth since it reinstituted the death penalty in 1979.

Berget was the second member of his family to be executed. His older brother, Roger, was executed in Oklahoma in 2000 for killing a man to steal his car.

Lynette Johnson said the executions held Robert and Berget accountable, and she asked that people not feel bad for the men. 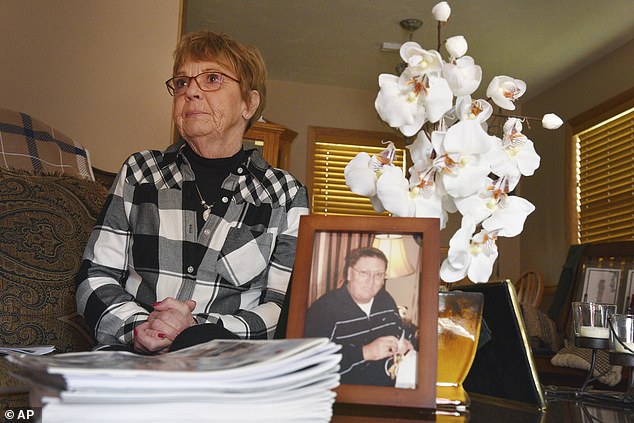 Johnson had turned 63 on the day that he was killed, and he was nearing the end of a nearly 24-year career as a guard.

He appealed his death sentence in 2016, but later asked to withdraw the appeal against his lawyers’ advice. Berget wrote to a judge saying he thought the death penalty would be overturned and that he couldn’t imagine spending ‘another 30 years in a cage doing a life sentence’. 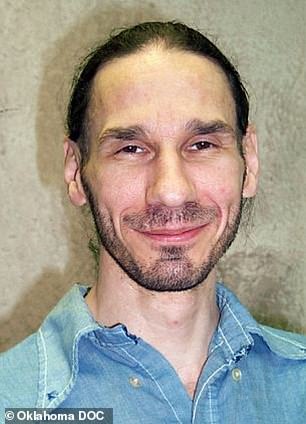 Berget was the second member of his family to be executed. His older brother, Roger, (above) was executed in Oklahoma in 2000 for killing a man to steal his car

The Department of Corrections planned to use a single drug to execute Berget. Policy calls for either sodium thiopental or pentobarbital. Pentobarbital was used in the state’s last two executions.

South Dakota has not had issues with obtaining the drugs it needs, as some other states have, perhaps because the state shrouds some details in secrecy. Lawmakers in 2013 approved hiding the identities of its suppliers.

Opponents of the death penalty gathered for a vigil Monday outside the South Dakota prison, some joining in a circle and singing.

Sioux Falls resident Elaine Engelgau, 62, who sat behind a sign attached to a cross reading: ‘JESUS: HE WITHOUT SIN, CAST THE FIRST STONE,’ told The Associated Press that she prayed the execution would be halted and for Berget’s soul.

‘I don’t think it’s right to kill a person, and I think the citizens of the state of South Dakota are wrong to kill someone,’ said Engelgau, a retired court reporter.

Scott Johnson told the Argus Leader that he didn’t know R.J. Johnson, but stood across the street in support of the death penalty. Scott Johnson said a prisoner in the penitentiary killed his sister and was sentenced to life without parole.

‘I know there’s two sides to everything, but I don’t understand their side at all,’ he said. 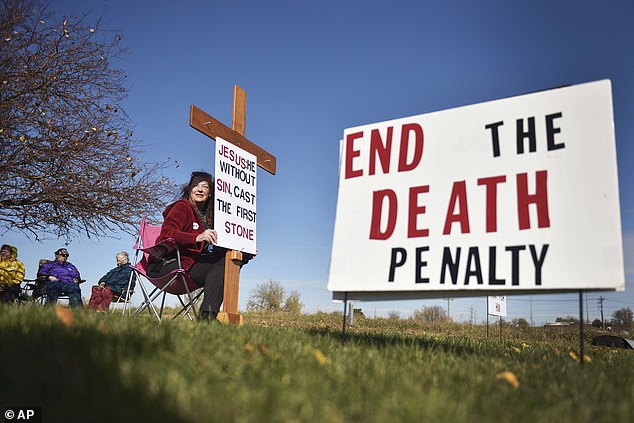 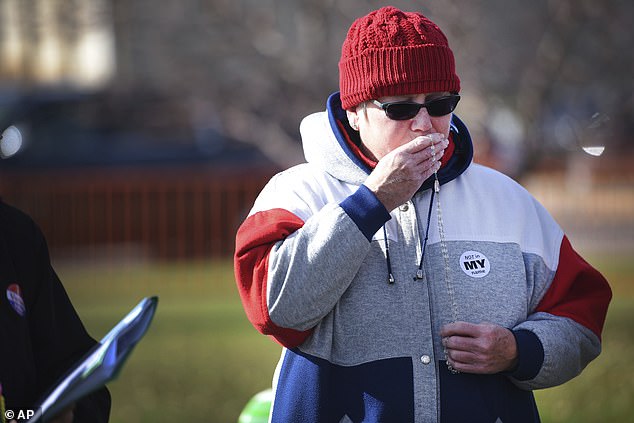