The Cheyenne River Sioux Tribe in South Dakota is refusing to take down its coronavirus checkpoints, ignoring a 48 hour ultimatum issued by Gov. Kristi Noem.

Gov. Noem sent leaders of the Cheyenne River Sioux Tribe and the Oglala Sioux Tribe letters on Friday demanding for the removal of checkpoints they’d set up along the US and state highways last month to keep out unnecessary visitors.

The Republican governor said she would take legal action if the tribes didn’t remove the checkpoints in 48 hours.

But on Sunday, Cheyenne River Sioux Chairman Harold Frazier said the checkpoints are the best tool the tribe has to track and stop the coronavirus if it should ever spread to tribal lands.

‘We want to ensure that people coming from “hot spots” or highly infected areas, we ask them to go around our land,’ Frazier said.

When quizzed about Noem’s request on the belief the checkpoints ‘interfere with regulating traffic’, Frazier insisted the structures are going nowhere.

‘With the lack of resources we have medically, this is our best tool we have right now to try to prevent [the spread of Covid-19],’ he said.

The governor of South Dakota is demanding that Native American tribes remove checkpoints on US and state highways leading to their reservations. The image above shows a checkpoint manned by members of the Cheyenne River Sioux Tribe Law Enforcement 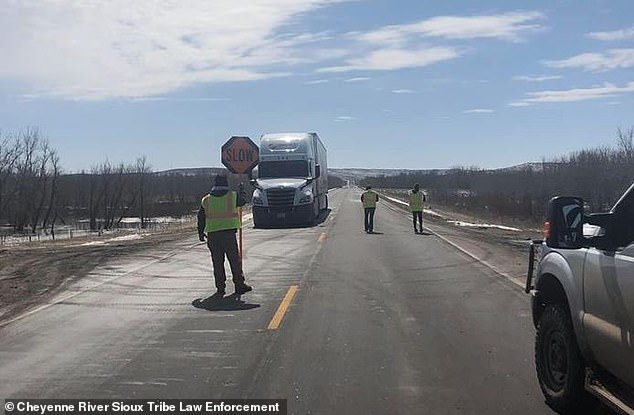 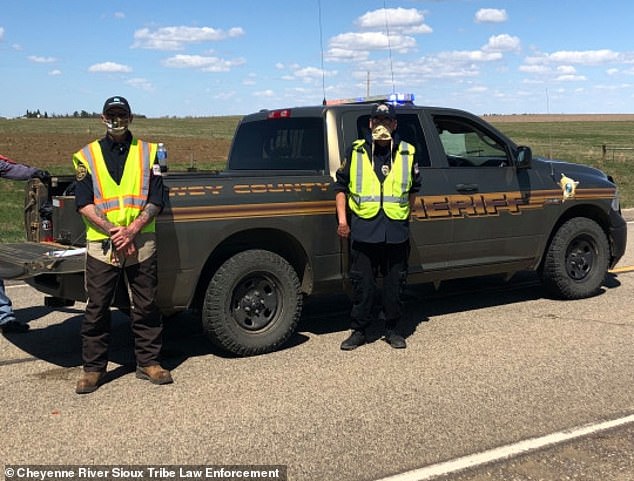 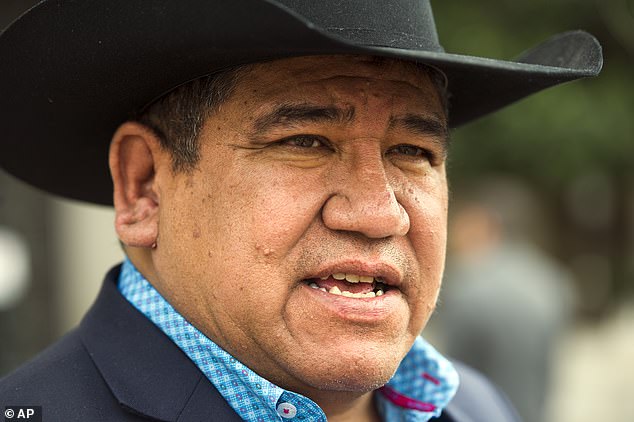 In response, Maggie Seidel, senior adviser to Gov. Kristi Noem reiterated that the checkpoints are ‘not legal, and if they don’t come down, the state will take the matter to federal court,’ she said in a Sunday email.

The tribe’s resistance sets up a potential legal showdown between a governor who has avoided sweeping stay-at-home orders and tribes that assert their sovereign rights allow them to control who comes on reservations.

The tribes have taken stronger action than the state because they are concerned the virus could overwhelm fragile health care systems that serve many people with underlying health problems.

Frazier said the Cheyenne River Sioux reservation lacks sufficient resources to deal with a coronavirus outbreak, noting that ‘the nearest health care, critical care is three hours away from where we live.’

The chairman said the tribe only has an eight-bed hospital on the reservation, which has no intensive care unit for its 12,000 inhabitants.

Much like the Oglala Sioux Tribe, Frazier’s tribe are still allowing essential businesses on to the reservations and said the checkpoints were set up to keep out tourists or other visitors who could be carrying coronavirus infections.

‘I request that the tribes immediately cease interfering with or regulating traffic on US and State Highways and remove all travel checkpoints,’ Noem said in a statement.

In her letter, Noem points to a memorandum pertaining to road closures on tribal lands, which states that tribes ‘may restrict road use or close’ tribally-owned roads temporarily without first consulting with the Secretary of the Interior or private landowners under conditions involving ‘immediate safety or life-threatening situations,’ like the pandemic.

However,  tribes can only restrict access to roads owned by state governments only ‘after the tribe has consulted and reached an agreement addressing the parameters of the temporary road closure or restrictions.’

‘We are strongest when we work together; this includes our battle against Covid-19,’ Noem signed off.

But the Cheyenne River Sioux Tribe said that it had met with local, state and federal officials to discuss the checkpoints and will not take them down. 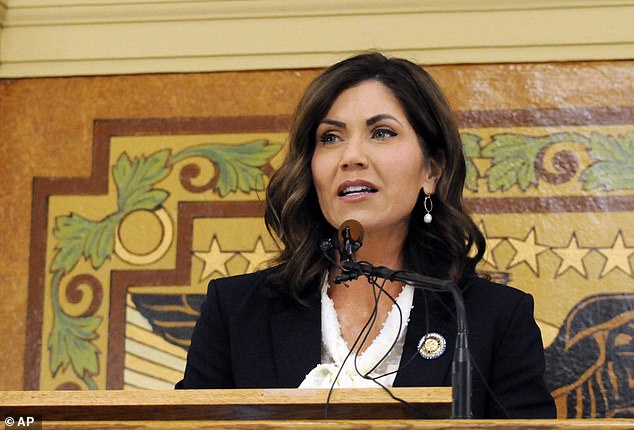 Governor Kristi Noem, a Republican, has so far resisted imposing lockdown orders statewide as the number of COVID-19 cases continue to climb in South Dakota 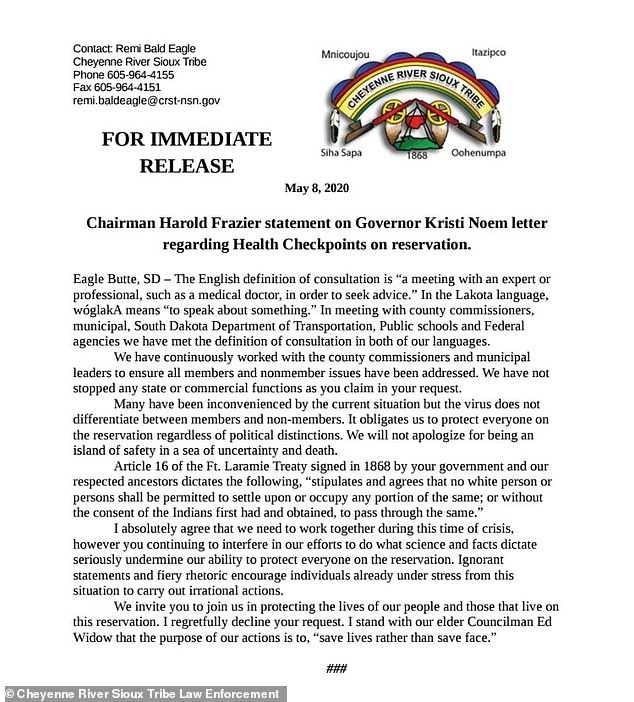 Tribal chairman Harold Frazier issued a statement Friday addressing Noem, saying, ‘You continuing to interfere in our efforts to do what science and facts dictate seriously undermine our ability to protect everyone on the reservation.’

‘Ignorant statements and fiery rhetoric encourage individuals already under stress from this situation to carry out irrational actions,” he said. “We invite you to join us in protecting the lives of our people and those that live on this reservation. I regretfully decline your request.’

Frazier said the purpose of the checkpoints was to ‘save lives rather than save face’.

Chase Iron Eyes, a spokesman for Oglala Sioux president Julian Bear Runner, said he expected the tribe to defend its rights as a sovereign nation to keep out threats to their health.

‘We’d be interested in talking face to face with Governor Noem and the attorney general and whoever else is involved,’ he said.

The Cheyenne River Sioux Tribe posted its checkpoint policies on social media. According to the conditions, residents may travel within areas within the state that have not been deemed a COVID-19 hotspot, for essential activity, such as a medical appointment.

Any South Dakota residents who do not live on the reservation are only allowed there if they’re not visiting from a hotspot, if the visit is for an essential activity and if they complete a health questionnaire before doing so.

Both the Cheyenne River Sioux and Oglala Sioux tribes have implemented strict stay-at-home orders for their respective communities. Noem, meanwhile, has resisted issuing such instructions for the state. 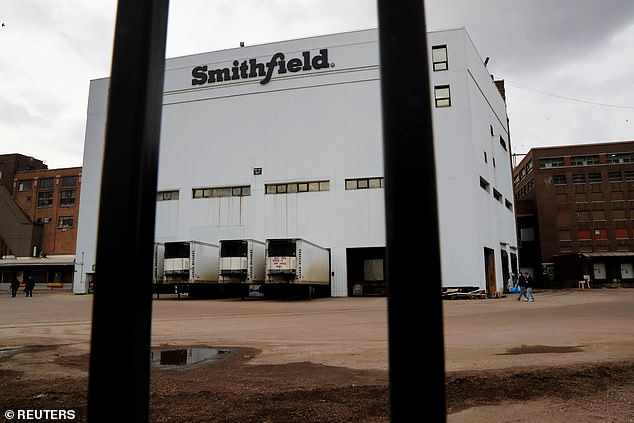 The above image shows a Smithfield Foods pork plant in Sioux Falls, South Dakota, on April 16. The plant, which was shuttered for three weeks after hundreds of employees became infected with COVID-19, reopened this week, though more COVID-19 cases have been reported

Gov. Noem also held calls with Smithfield employees on Thursday and Friday as the pork plant where hundreds of employees were infected reopens after being shuttered for more than three weeks.

Noem’s spokesman Ian Fury said she spent about two hours speaking with employees in total and that the governor’s office had reached out to every employee at the plant.

But an organization advocating for Smithfield employees disagreed.

South Dakota Voices for Justice said in a statement that employees who were invited to the call were ‘handpicked by corporate HR.’

The organization said it was still asking Noem to meet with advocates, along with employees, ‘so we can work together to ensure worker safety and Smithfield’s return to producing products essential to our nation’s food supply.’

After the Department of Health held a mass testing for Smithfield employees and their family members this week in Sioux Falls, officials reported a spike in confirmed cases of coronavirus on Friday with 239 new infections.

Nearly 250 new cases were reported on Saturday after a mass testing event in the Sioux Falls area. 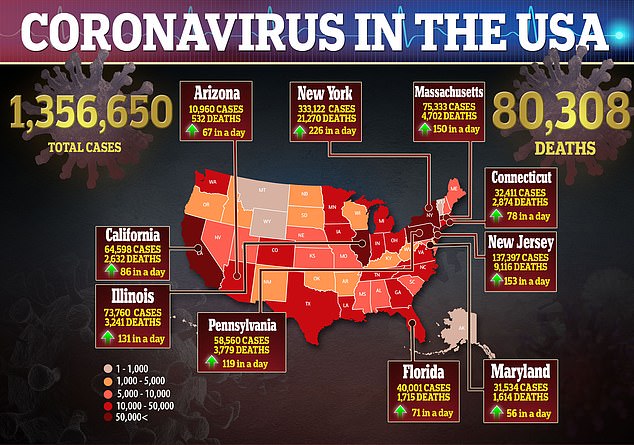 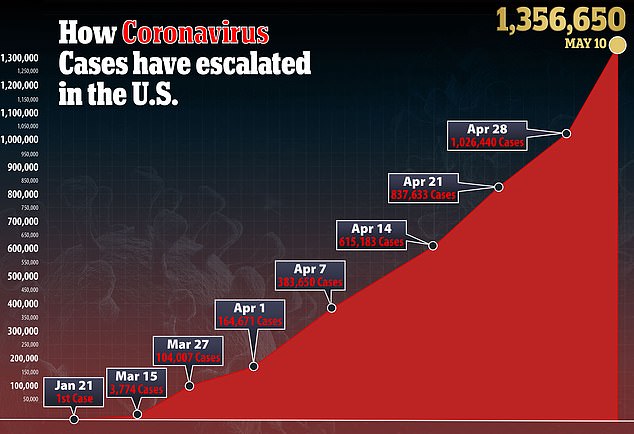 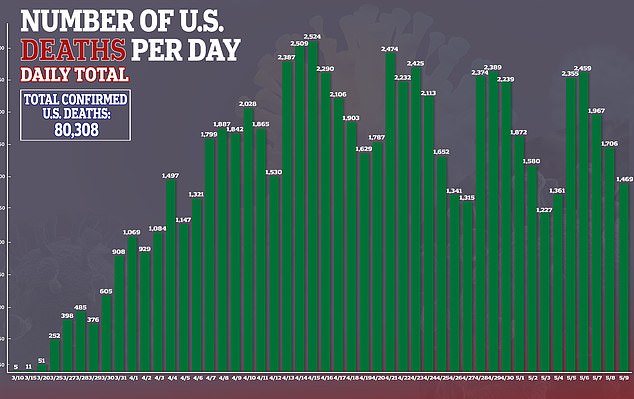 State Epidemiologist Josh Clayton said health officials have not been able to sort out which test results came from the mass event, but said it was likely the spike in confirmed cases came from those results.

A total of 203 of the confirmed cases from Friday were reported in Minnehaha County, which contains most of Sioux Falls.

State health officials said that 232 of the 249 new cases reported on Saturday were in Minnehaha County.

A total of 435 people have tested positive in Minnehaha County in the last two days, for a total of 2,767 cases in the county.

The total number of cases statewide now stands at 3,517, with the death toll up to 35.

Three new deaths were confirmed on Saturday, all of them Minnehaha County residents over the age of 70.  Officials said 79 people are hospitalized with the virus.

While 3,517 have tested positive, the actual number of infections is thought to be far higher because many people have not been tested and people can be infected without feeling sick.

For most people, the coronavirus causes mild or moderate symptoms, such as fever and cough that clear up in two to three weeks.

For others, especially older adults and people with existing health problems, it can cause more severe illness, including pneumonia.