The number of coronavirus infections in South Dakota has increased three-fold in a  week to more than 1,000 but the state’s Republican Governor Kristi Noem is still refusing to order a lockdown.

Infections in the Midwest state have trebled in just one week and the state now has one of the country’s largest virus hotspots following an outbreak at a meat plant.

At the start of the month there were only 129 infections in the state but, as of Wednesday, 1,168 cases have now been reported.

The state has recorded six deaths amid the pandemic – the lowest of any state apart from Wyoming, which recorded its first death this week.

South Dakota saw its infection numbers spike following an outbreak at a pork processing plant in Sioux Falls where about 500 employees tested positive for coronavirus.

An estimated 120 people, who are family members of the employees, have also now tested positive.

The combination of the figures means the outbreak at Smithfield Foods, which was forced to shut down this week, is the single largest cluster of coronavirus cases in the country.

Despite the surge in cases, Gov Noem – as recently as Wednesday – was standing firm on her decision not to issue a stay-at-home order for the state.

She has argued that it was up to individuals – and not governments – to decide if they should go to work, worship or stay at home.

South Dakota is among only five states in the country – all of which have Republican governors – that currently do not have lockdown orders in place.

Defending her decision earlier this month, Gov Noem suggested the lockdowns imposed on 95 percent of the country was ‘herd mentality, not leadership’.

‘South Dakota is not New York City,’ she said. 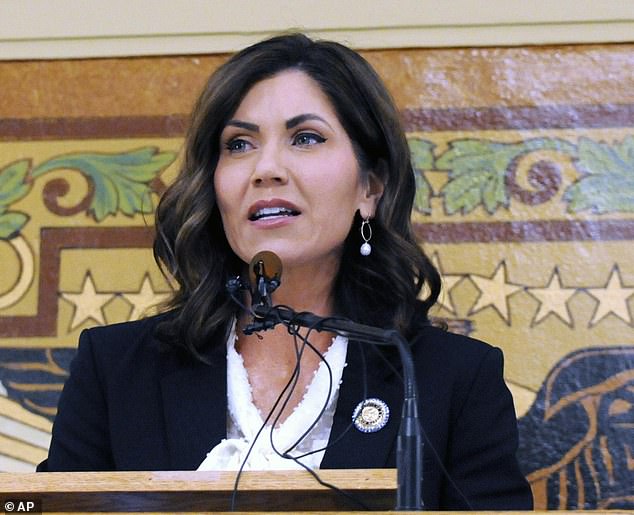 Despite the surge in cases, Gov Kristi Noem – as recently as Wednesday – was standing firm on her decision not to issue a stay-at-home order for the state 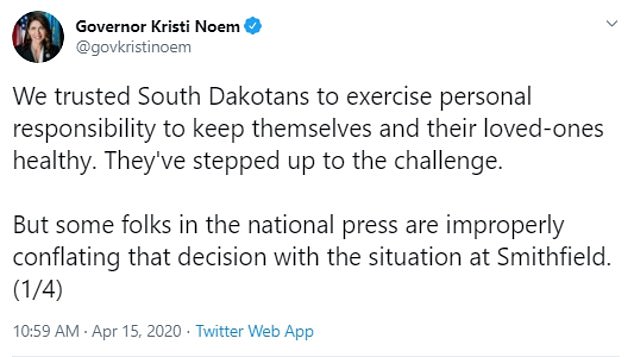 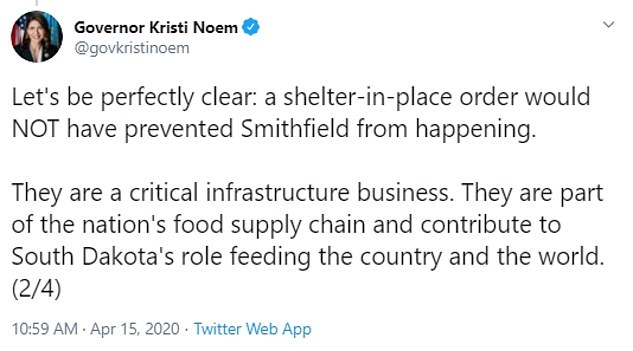 In a series of tweets on Wednesday, Gov Noem accused the media of conflating her decision not to issue a lockdown with the outbreak at the food plant.

‘We trusted South Dakotans to exercise personal responsibility to keep themselves and their loved-ones healthy. They’ve stepped up to the challenge,’ she tweeted.

‘Let’s be perfectly clear: a shelter-in-place order would NOT have prevented Smithfield from happening. They are a critical infrastructure business. They are part of the nation’s food supply chain and contribute to South Dakota’s role feeding the country and the world.’

Addressing the outbreak in Fox News interview on Monday, Gov Noem said: ‘It certainly is a tense situation there but we’ve got a lot of people focused on helping those individuals get better.

‘Overall the state is doing very, very well. This hot spot is one area that we are addressing.’

It comes after the South Dakota State Medical Association wrote a letter to Gov Noem on April 3 urging her to issue a quarantine order for residents.

‘A stay-at-home order would give our health professionals the necessary time and resources to manage this pandemic,’ the group said. 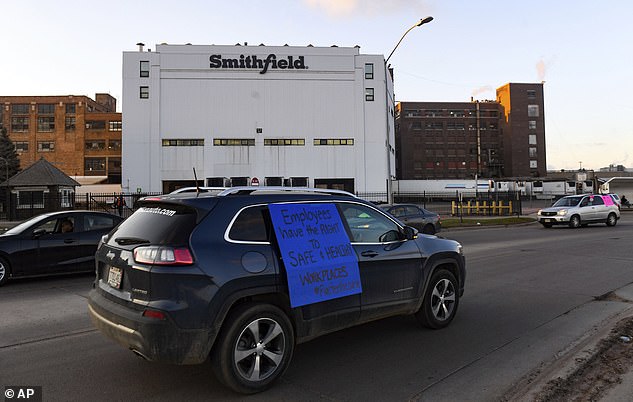 The outbreak at Smithfield Foods, which was forced to shut down this week, is one of the single largest clusters of coronavirus cases across the country

‘We may soon be facing the challenges and hardships being seen in New York and other cities if a shelter in place order is not issued immediately.’

Sioux Falls Mayor Paul Ten Haken, who is also a Republican, issued an ordinance this week that requires residents in the city to stay at home after Gov Noem refused his request to issue a statewide one.

His ordinance allows residents to still travel for work, as well as out for groceries and essential items. It urges people to social distance if they are outside.

In an interview with CBS This Morning on Wednesday, the mayor said the number of cases were ‘staggering’.

‘The growth that we’ve seen in our COVID cases, really in the last week, has been a bit staggering,’ TenHaken said.

‘We’re doubling and we’ve been doubling every four days for the last 18 days.’

In reference to Gov Noem refusing to issue a lockdown, the mayor went on to say that he would rather be ‘chastised for being over-cautious’ than for not doing enough to stop the spread of the coronavirus.