By Danyal Hussain and Chris Pleasance for MailOnline

Two Russian bombers and two Chinese bombers were spotted entering the zone  together early on Tuesday.

It was the first time a Russian military aircraft had violated South Korean airspace.

However, Moscow has denied the claims, saying its jets had only carried out planned drills over international waters.

A Russian early warning and control aircraft twice violated South Korean airspace over Dokdo – an island that is occupied by South Korea and also claimed by Japan, which calls it Takeshima – just after 9am, according to the South Korean military.

Russia’s foreign ministry denied the claims and said in a statement: ‘Two Tu-95 strategic bombers of Russia’s aerospace forces carried out a planned flight in the airspace above the neutral waters of the Sea of Japan.’

China’s foreign ministry said that South Korea’s air space identification zone is not a territorial airspace and all countries enjoy freedom of movement there.

‘We take a very grave view of this situation and, if it is repeated, we will take even stronger action,’ Chung said. 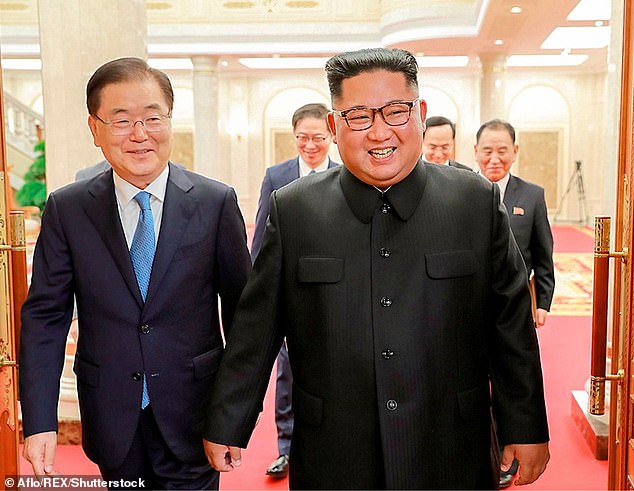 The Russian aircraft was an A-50 airborne early warning and control aircraft, an official at South Korea’s Joint Chiefs of Staff (JCS) said, and South Korea scrambled F-15 and F-16 fighter jets in response to the intrusions.

The South Korean jets fired around 360 rounds of ammunition during the incident.

A South Korean defence official added that the Russian aircraft did not respond in any threatening way.