A Roman-style pizza topped with ‘nduja and roasted peppers served at a newly-opened restaurant in south London has been named the best in the country.

It is topped with Mike’s in-house tomato sauce – and costs just £4.50 a slice.

A Roman-style pizza topped with ‘nduja and roasted peppers served at a newly-opened pizza restaurant in south London has been named the best in the country.

Cooked by chef Francesco Canzani, the pizza beat 16 others in the final from restaurants across the UK – including from the likes of Pizza Pilgrims and Polpo.

The pizza is judged on the base,  flavour profile, how well it’s cooked, presentation, texture, quality, consistency and  ingredients.

The owner said they were pleased the traditional method was being recognised, as most awards going to Neapolitan -style pizzas.

The main difference between the pizza from Rome and Naples, is the way the dough is made. 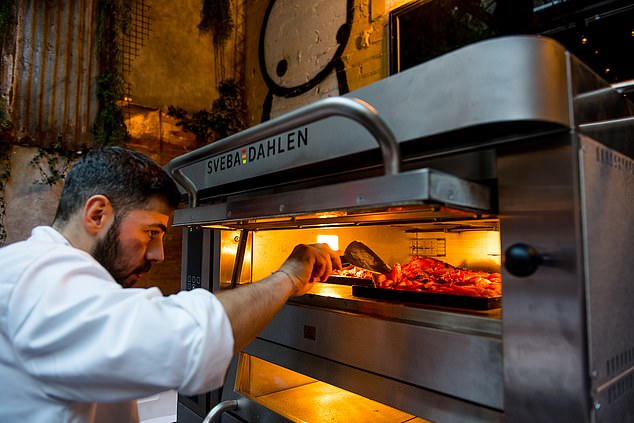 Cooked by chef Francesco Canzani (pictured) the pizza beat 14 others in the final from restaurants across the UK.

National Pizza Awards: The 16  finalists from across the UK

Purezza – On The Seaside

Slice by Pizza Pilgrims – Hawaii Not? (AKA The Converter)

The Big Dough Co. – Getting’ Chicky With It

In Napes it’s made with flour, yeast, water and salt; in Rome they add olive oil which means they can stretch the dough to be thinner

Speaking about the win, Mike Davies, co-owner of Mike’s Peckham and sister site The Camberwell Arms, told FEMAIL: ‘Francesco has worked so hard to make a dough as special as it is,’ ‘It’s a little bit different from the other kinds of pizzas that were in the final, so it’s nice to have that kind of representation.

‘Roman-style pizza – especially pizza Italia, which is the kind of pizza that we make – is really not an old tradition; it’s probably about 40 years old.

‘Neapolitan pizza has obviously been made for a lot longer than that. 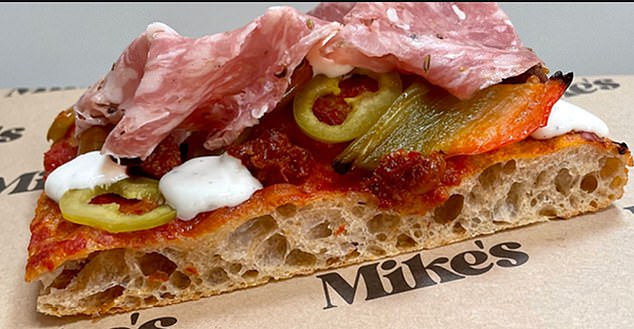 The pizza (pictured) is judged on the base, flavour profile, how well it’s cooked, presentation, texture, quality, consistency and ingredients.

‘The thing about Roman as a tradition is that there are less rules, so it means that we can be a bit more flexible with toppings.

‘You’ll find things that you wouldn’t necessarily find on a more classic pizza.

What’s in the UK’s best pizza? The Dondini from Mike’s Peckham

The dough is risen over a minimum of 48h hours using a  blend of the highest quality flours from Mulino Marino in Piedmont.

‘I love all kinds of pizza to be honest, but I’m quite excited by the idea of something a bit less traditional getting the credit it deserves.’

This year was the fifth instalment of the national event with chefs from  restaurants, pubs and pop-ups battling it out.

A live cook-off was held at the Islington Metal Works in London.

‘The dramatic rise of delivery and takeaway in the last 18 months has only served to increase the popularity of pizza across the UK, so there’s never been a more exciting time for this dish,’ says Rosanna Spence, editor of Dine Out, the magazine which organises the awards.

‘This year’s National Pizza Awards boasts our most impressive group of finalists yet, with previous winners returning to defend their titles, and some new faces to give them a run for their money. We can’t wait to fire up the ovens and celebrate these incredible businesses together – and for our finalists to enjoy the boost the awards will bring to their businesses.’

The National Pizza Awards also crowned a Pizza Chef of the Year, which went to Laurence Tottingham of Revolution Bars Group, after he created a stunning Technical Pizza from ingredients supplied by the event’s sponsors.