When the Southampton equaliser came, the release was visceral. Energy coursed through this stadium for the first time all evening. For Southampton’s under-pressure manager Mauricio Pellegrino, it offered hope of a dramatic revival. Yet it fizzled out, and that unfortunately has been the story all too often in Pellegrino’s tenure. Brief hope, lasting disappointment. Plenty of promise, little substance.

For over an hour, Southampton had probed and prodded for their stubborn opponents for a way back into this game. Jack Stephens headed wide, Pierre-Emile Hobjbjerg hit the crossbar and Brighton repelled every wave of Southampton pressure. Manager Mauricio Pellegrino played two of his cards at half-time, pulling Oriol Romeu and Dusan Tadic and introducing Sofiane Boufal and £19m January signing Guido Carrillo.

Rancour grewon the terraces. Fans became impatient when players failed to show for throw-ins and groaned when the ball was passed back to the goalkeeper. They booed at the half-time whistle and jeered at every lapsed pass in the second. A drama threatened to become a very concerning crisis. 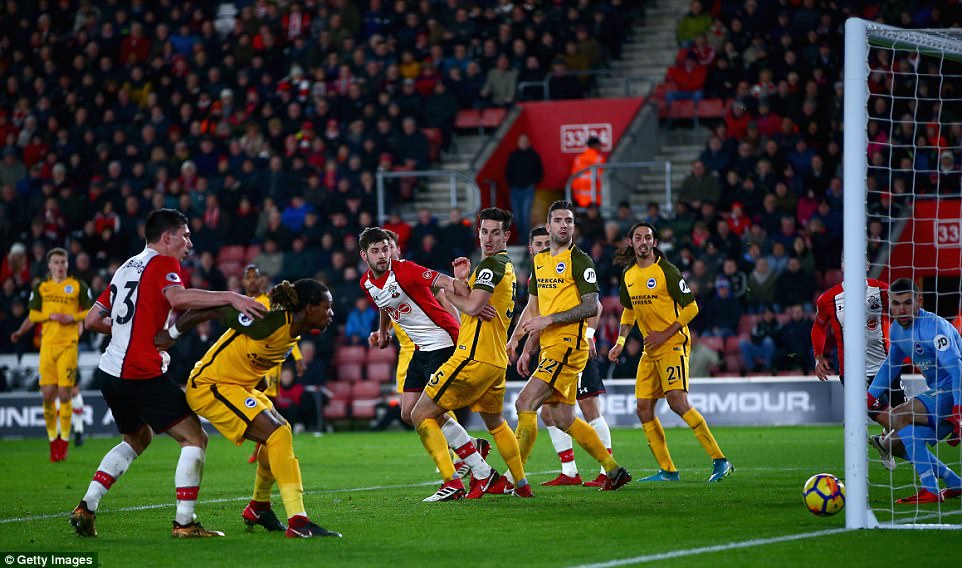 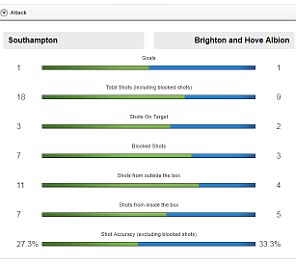 Both teams have struggled in front of goal

Yet as is often the way, the eventual equaliser was scruffy in the extreme. James Ward-Prowse whipped a low free-kick in from the left-side. It took one deflection, two deflections and Stephens then pounced with a clever backheel to turn it in.

So how Southampton needed the goal when it came. A draw, at least, keeps them in touch with the relegation pack. For Pellegrino, matters had grown ever more ominous. As relegation rivals Swansea and Bournemouth nobble the knees of high-flying opponents, Southampton’s malaise came into sharper focus. For Pellegrino, the simple facts of the matter were these.

He has been at the club seven months, taken his team from an 8th placed finish and EFL Cup final last season into the relegation zone. His team have now failed to win any of their last 12 top-flight games and have won only three all season.

The regression is stark and for a while, Brighton’s early lead, gained through a Glenn Murray penalty, promised to cast the death knell on the manager’s time at the club. 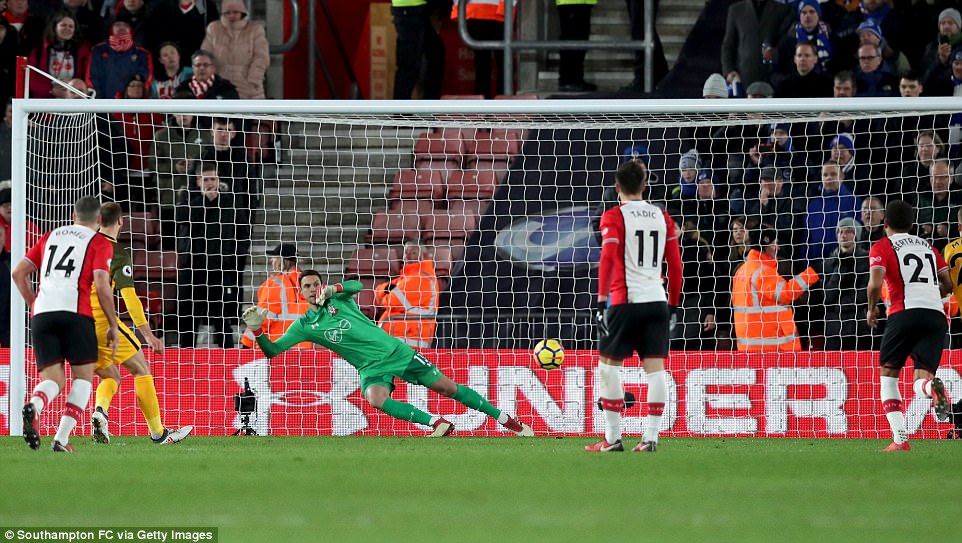 Seven of the 12 bottom-placed teams in the Premier League have sacked their managers already this season. Three of those manage promoted sides Huddersfield, Brighton and Newcastle, while Eddie Howe has his own credit in the bank at Bournemouth. So Pellegrino is fortunate, but for how much longer?

It is not all on Pellegrino, of course. Southampton are now discovering that you cannot keep selling the future and rebuilding a brighter one in a pre-season’s notice. This was always likely to be a high wire model and this season it is threatening to implode in devastating fashion.

This had been earmarked as the game they dare not lose. Brighton at home is not a gimme but it is a handy fixture. After all, Chris Hughton’s side were the lowest scoring team in the Premier League before this match with 17 goals. They had won one of their last 13 matches and failed to score in nine of those.

Yet Southampton made a dozy start and Brighton were the early risers. Jose Izquierdo should have scored within a minute when the ball fell loose in the penalty area but instead he struck over the top. 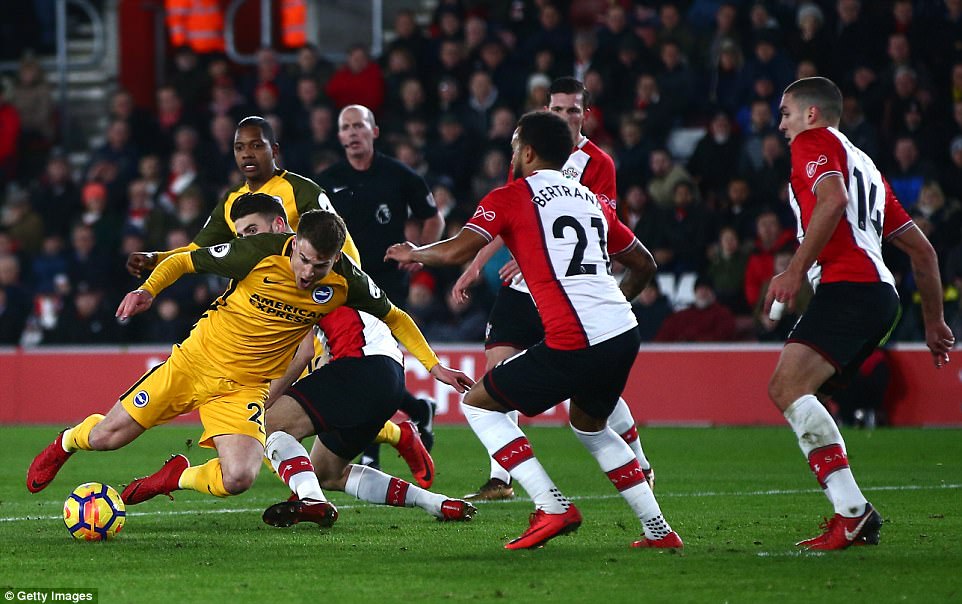 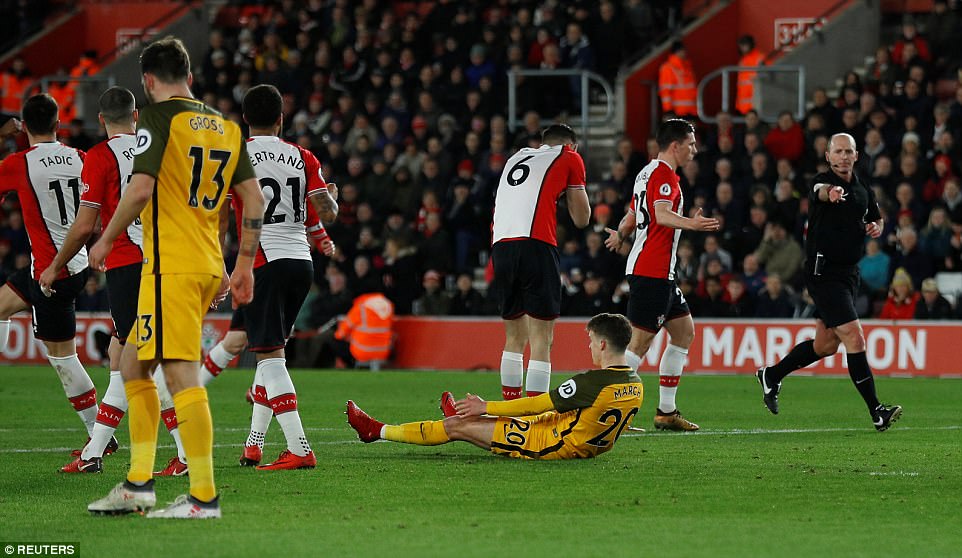 Brighton took the lead their start merited after 14 minutes. Izquierdo broke into the penalty area and teed up Solly March. As the winger turned smartly, Wesley Hoedt stuck out a leg and March went over. Glenn Murray finished coolly from the spot.

Yet Southampton barely surfaced as an attacking force. Their first-half play possessed neither verve nor intensity. In truth, Brighton might have gone their throats and killed the game but instead retreated.

Oriol Romeu headed over from a corner. James Ward-Prowse delivered a couple of teasing crosses into the penalty area. But that was about the sum of it. Even fortune remained with Brighton. When Matthew Ryan’s clearance rebounded off Pierre-Emile Hojbjerg’s, it clattered into the cross-bar.

But spearheaded by Carrillo’s enthusiasm up front, Southampton raised themselves from the canvas. Stephens’ directed a free header wide of the goal. Then he turned one in. It was enough to rescue a point, but only the boardroom will decide if it is enough to preserve Pellegrino. 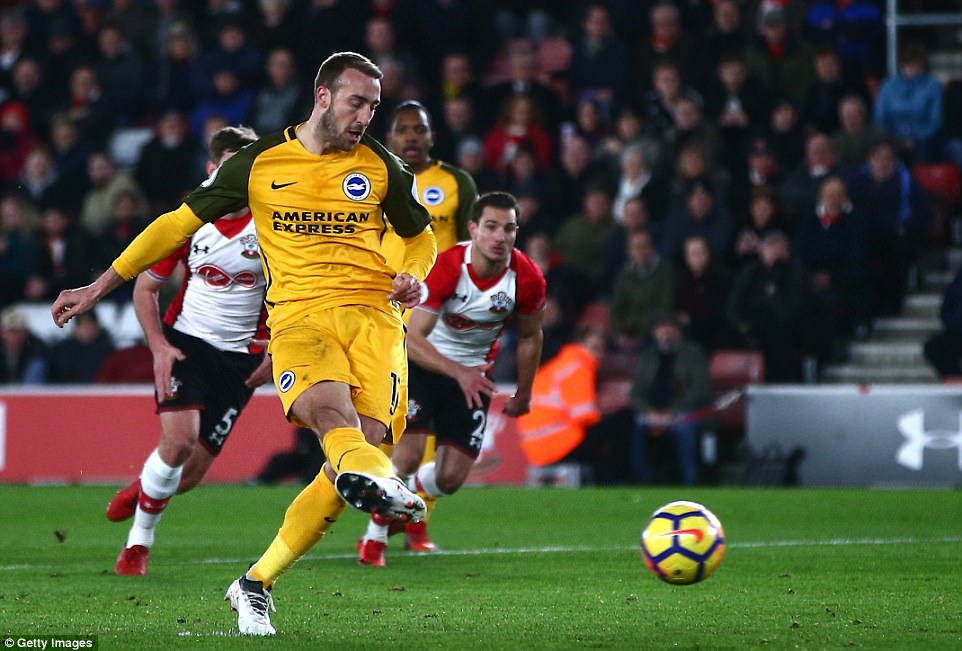 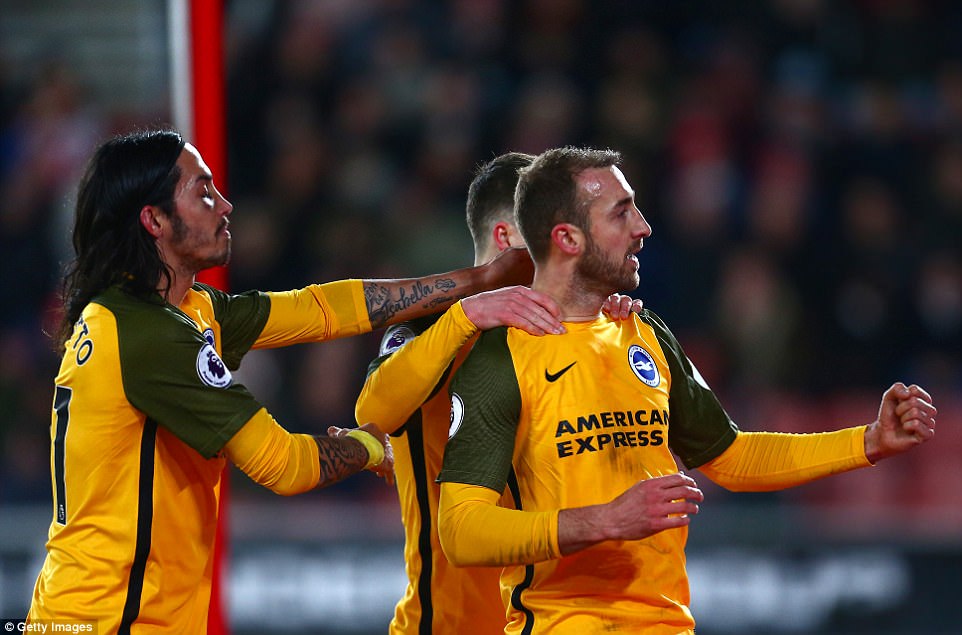