Terrifying footage has emerged of a daredevil skylarker risking death while scaling a high rise apartment tower on the Gold Coast.

The video filmed on Sunday shows the man scaling a Southport residential tower and leaping between balconies 24 storeys high, horrifying shocked onlookers below.

One mistake could have seen the man plunge to his death.

The incident took place at Southport Central Apartment Towers, where it’s understood residents home at the time were oblivious to the thrillseeker’s antics.

The stuntman could now be charged with unlawfully climbing a building and face possible jail time. The maximum penalty for the offence is 12 months behind bars.

Footage of the stunt shocked Gold Coast locals who described the man’s antics as foolish and reckless.

Others questioned why the daredevil was up there with the Gold Coast renowned for its Spiderman burglaries.

The shocking incident was filmed hours after a man aged in his 30s was rushed to hospital with horrific leg injuries after he fell 6m from a beer garden balcony in nearby Surfers Paradise on Saturday night.

It’s understood he was trying to retrieve a dropped phone at the time. 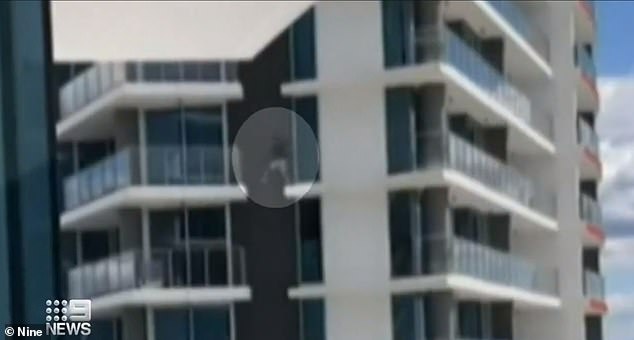