Soviet maps drawn up for when Britain turned Communist

Scrupulously detailed Soviet maps of Britain that were prepared in anticipation of the Communist bloc ruling the world have been unveiled in a new book.

For fifty years, spies from the USSR worked tirelessly to ensure they were totally familiar with cities such as London, Manchester and Edinburgh.

Around 100 UK cities and towns, including strategically significant areas close to naval bases, have been studied for what was known as the Red Atlas.

Among the collection is one which lists place names phonetically, and could have been used by Polish citizens if they occupied England.

It shows how to pronounce place names of places in Essex and Kent, and could have been used by Warsaw Pact troops if Britain had turned red.

Saufend-on-Sji (Southend-on-Sea), Mejdsten (Maidstone) and Czelmsfed (Chelmsford) are just some of the major locations that feature.

Among the collection is one which lists place names phonetically.  Among the major locations to be included are Saufend-on-Sji (Southend-on-Sea) Mejdsten (Maidstone) and Czelmsfed (Chelmsford) 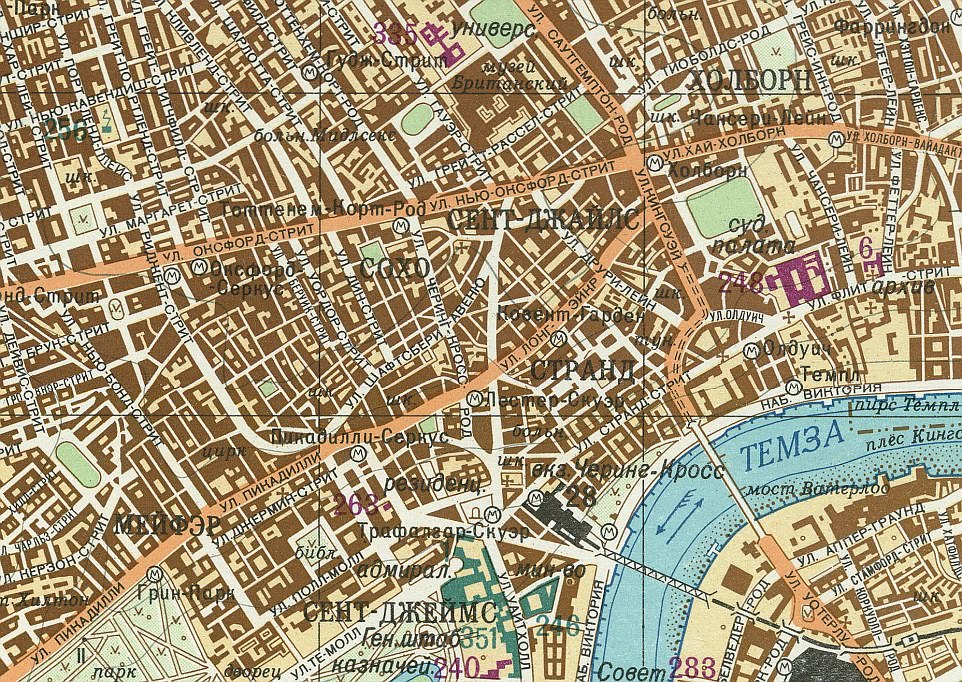 This map shows central London from 1985 (scale 1:25,000) shows the Waterloo and Hungerford bridges. Landmarks such as Somerset Houes and The Savoy Hotel can be found to the north of the river. The circled ‘M’ symbols represent Underground station 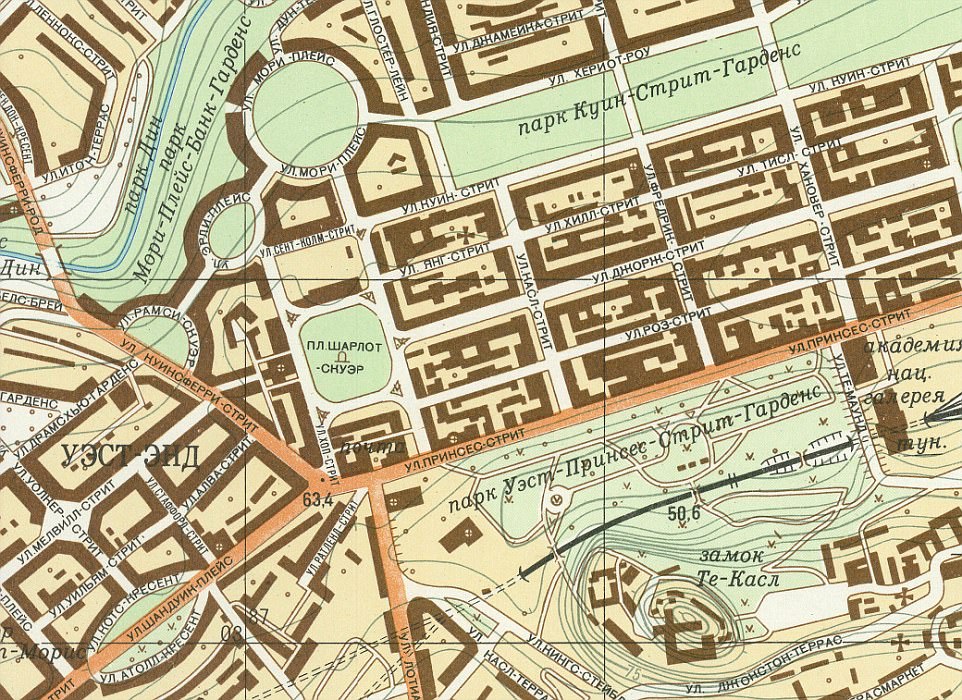 Edinburgh (scale 1:10,000) in 1983 looks quite similar to the present day. This area, to the west of the city centre, has retained many of its open, green spaces 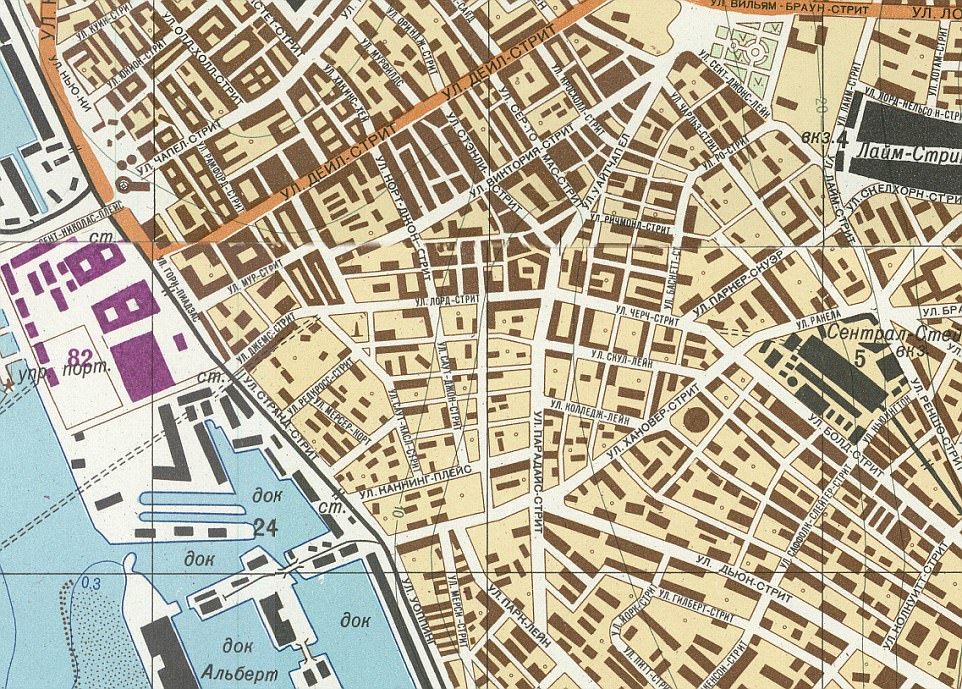 Liverpool’s Albert Dock area from 1974 (scale 1:10,000) is shown here. The city’s port has long been one of the most important places for UK sea trade and passenger ferries 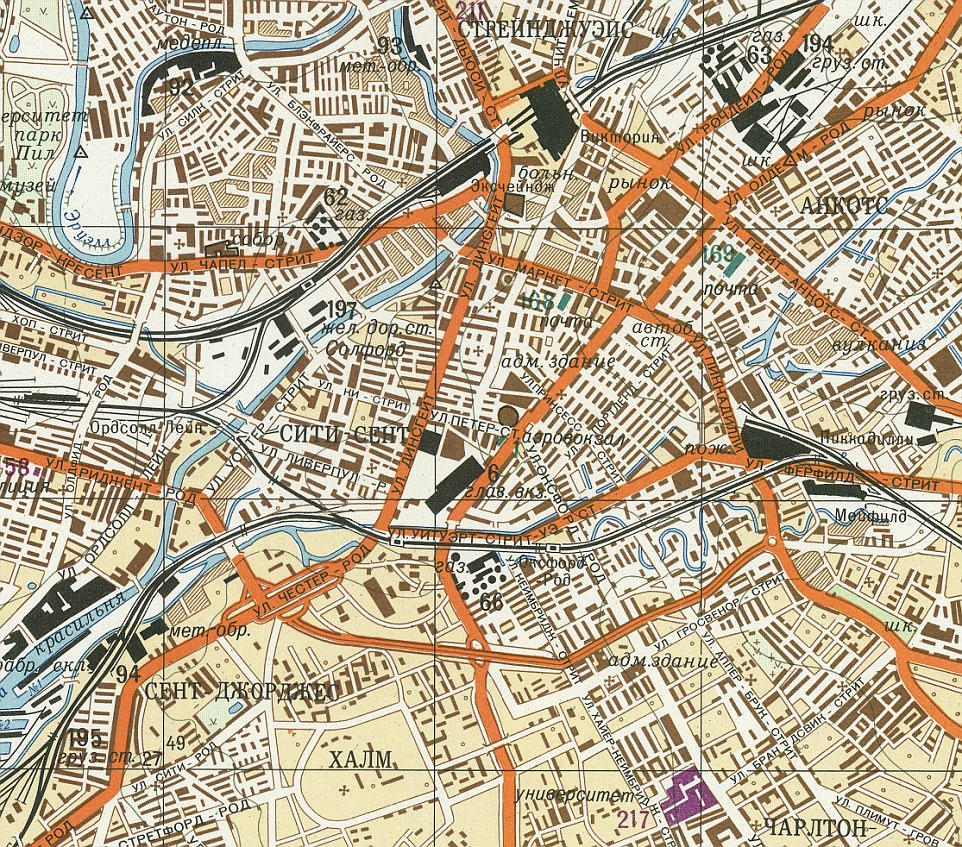 This Soviet image of central Manchester from 1975 (scale 1:25,000) shows the city centre area, with Piccadilly station the black area on the north side of a crossroads to the east of the picture. The grey lines represent the city’s tram tracks

It is one of many examples of Soviet maps that can be found in The Red Atlas: How the Soviet Union Secretly Mapped The World, by John Davies & Alexander J Kent.

However, while Mr Davies believes the phonetic map is intended for Eastern European occupation, he feels they believed this would have been achieved through an ideological victory for Communism, rather than via combat.

He told MailOnline: ‘These were huge pieces of paper that could not have been used in battle.

‘They are nothing like Nazi maps of Britain in the Second World War, there’s no strategic attack points listed, but there are civil amenities such as post offices and bus stops.

‘Knowledge is power. They believed that the whole world would be Communist, and they would be in charge. If you were in possession of one these maps, you would have a lot of information at your hands.

‘If you were planning some sort of nuclear holocaust, these maps would have been totally useless because none of it would be there anymore’.

Former researcher at The Economist, Alex White, tweeted an image of the phonetic map and the post has received more than 6 thousand likes.

Helen Linkenbagh commented on the tweet, saying: ‘It’s tough picking a favourite, but KOULCZYSTE has to be up there.’

It is part of a series of large-scale maps which covered the whole world, created between 1950 and 1990.

Individual towns and cities are also the subject of precisely drawn images, with the different types of plantations in parks and building ownerships.

‘Important items’ – buildings of particular cultural or military importance – such as Scotland Yard and Government offices – are all listed and indexed with a number, with London alone having 374.

Many of the maps also have detailed essays on the back, profiling the industrial, economic, military and geographical significance.

Experts are still unsure of exactly how such a high level of detail was gleaned, given that they far exceed what is provided on usual ordinance survey maps.

Because many of the maps leave out road names, it is believed that aerial photographs the Zenit satellites were a key source of the information.

During the same period, America and Britain both had records of the development of major cities, but they were far more selective about locations and the level of detail. 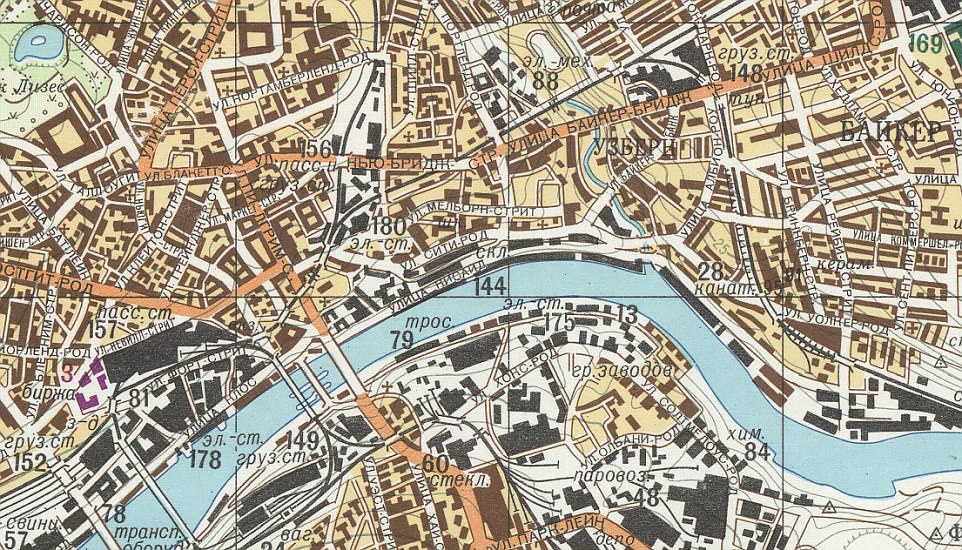 Newcastle-upon-Tyne (scale 1:25,000) from 1977 shows the Tyne Bridge in the centre of the city. Newcastle Castle and the  city’s cathedral can be located on this section of the map 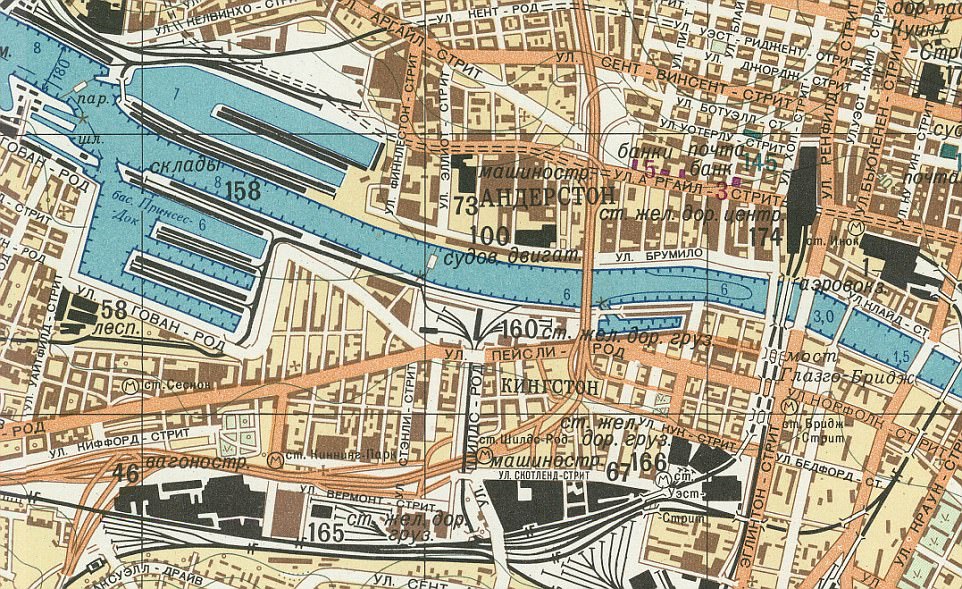 This is an image (scale 1:25,000) of Glasgow’s River Clyde. This particular section now includes important buildings such as BBC Scotland and the SECC 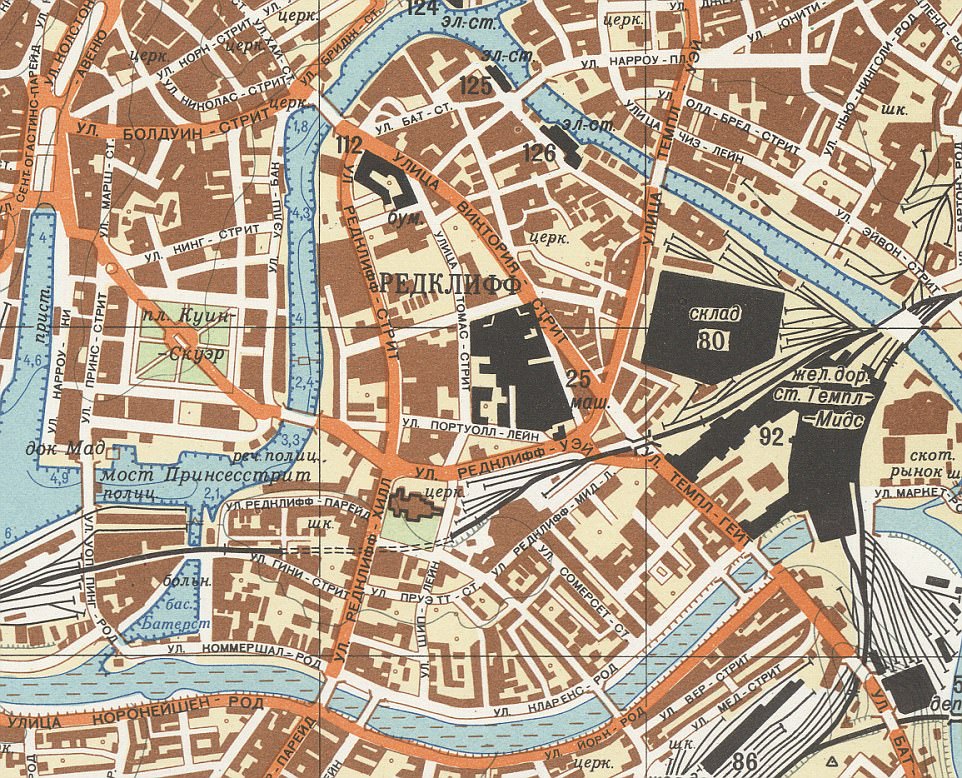 This map is from 1972 and shows Bristol (scale 1:10,000). Queen’s Square is the green space that can be seen to the west of the image. This area is close to the city’s cathedral and council buildings

Mr Davies and his co-writer Mr Kent have spent 15 years carrying out research for their book – but are still staggered by how far ahead of their time they were.

‘People didn’t have Google Earth or Street View back then,’ he said.

‘We actually call them “the Wikipedia of their day” – if you needed any information at all, you could consult one of these maps.

‘The level of detail really is mind-boggling, and it’s all completely correct. They are works of art in their own right. The project was started by Stalin and it ran all the way through beyond Kruschev’s time.

‘And the quality is not what we typically associate with the Soviet Union. We know food was in short supply, the quality of paper was poor and tractor records were falsified, but these show that if you were funded by the military, you could get it right.’