Soy-based formulas may cause early sexual maturity in baby girls

Female infants given the non-dairy formula over cow’s milk alternatives or breast milk are significantly more likely to have mature cells in their vaginas, a study found.

Previous research suggests soy protein contains high amounts of the oestrogen-like compound genistein, which can alter people’s hormone levels and affect their development. It is unclear why boys appear to be less effected.

Lead author Dr Margaret Adgent from Vanderbilt University, said: ‘Our study found subtle effects in oestrogen-responsive tissues in soy-fed infants and we don’t know if these differences are associated with long-term health effects.’

Past studies link soy to disrupted hormone function, leading to conditions such as infertility, breast cancer and thyroid disorders.

Results further suggest being fed any sort of formula, or breast milk, does not influence babies’ breast bud diameters or hormone levels.

The researchers believe their findings warrant further investigation into the effects of soy-based formulas on babies’ reproductive health.

Study author Dr Virginia Stallings, from the Children’s Hospital of Philadelphia, added: ‘For new and expectant mothers deciding on how to feed their infants, as always, we strongly support breast-feeding, as recommended by the American Academy of Pediatrics (APP).’

The APP does not recommend soy formulas for premature babies but states it may be suitable for those who are unable to properly digest milk.

The researchers analysed 410 babies born in hospitals in Philadelphia between 2010 and 2013.

Some 102 of the infants were exclusively fed soy-based formulas, while 111 received cow’s milk alternatives and 70 were only given breast milk.

Dr Stallings said: ‘All of the mothers had decided on their feeding preferences before we enrolled them in the study.’

The male baby participants were followed for 28 weeks and the girls for 36.

Signs of sexual maturation in the infants were assessed via analysing urethra volume; breast bud diameter; cells in the vagina and urethra; estradiol levels, which is a form of oestrogen; and follicle-stimulating hormone amounts, which is involved in egg production.

The findings were published in The Journal of Clinical Endocrinology and Metabolism. 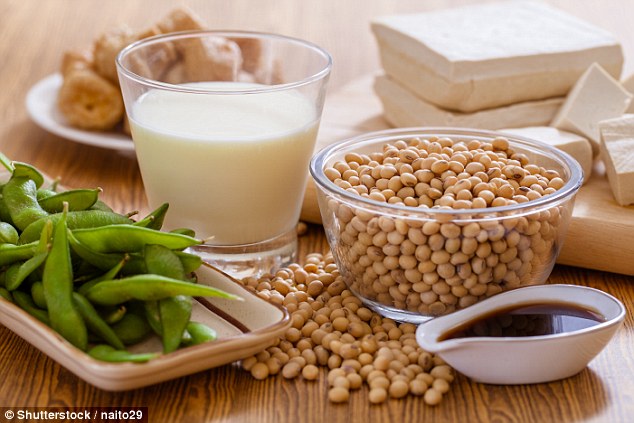 This comes after research released last month suggested breastfeeding reduces women’s risk of heart disease for up to 15 years.

Among women who had a healthy blood pressure during their pregnancies, breastfeeding for six months or longer significantly increases their so-called ‘good cholesterol’ levels, as well as lowering their amounts of circulating fat, a study found.

Feeding naturally also reduces the thickness of the carotid artery, the research adds. This supplies the head and neck with oxygen-rich blood, with wider diameters being associated with stroke.

Lead author Dr Malamo Countouris from the University of Pittsburgh, said: ‘The study adds to the evidence that lactation is important not just for the baby but for the mother.

‘Breastfeeding seems to be cardioprotective in these women, as evidenced by improved cholesterol and markers of subclinical cardiovascular disease.’

According to the researchers, breastfeeding stimulates the release of the hormone oxytocin, which may play a role in lowering blood pressure.