SPA DOCTOR: How a cryotherapy chamber can help you help you battle through a bad bout of jet-lag

SPA DOCTOR: How a cryotherapy chamber can help you help you battle through a bad bout of jet-lag

By Liz Goodricke For The Mail On Sunday

After a two-week holiday hiking in Central America, my poor legs were so weary and heavy that I could barely walk up a flight of stairs. I was also battling a bad bout of jet-lag.

In need of an energy boost, I turned to KXU, a West London fitness studio and spa favoured by both Prince Harry and Princess Beatrice.

In addition to running a host of fitness classes, KXU boasts a cryotherapy chamber. Popular with A-list celebrities such as Jennifer Aniston, it exposes the body to extremely cold temperatures in an effort to stimulate healing.

According to fans, a session aids muscle recovery, provides an energy boost and triggers a rush of endorphins.

Braving the cold: Cryotherapy chambers are said to aid healing and help with fatigue

I must admit I was nervous before stepping inside the sealed chamber. I’m someone who feels the cold anyway and will sit in the office wrapped in a shawl to shield myself from the air-conditioning. So the idea of stripping down to a pair of shorts and sports bra to brave a temperature of minus 85C was slightly terrifying.

Fortunately, I was given some high-tech gear to keep my extremities warm. I popped on thick gloves, a headband, thermal shoes and a mask to protect my nostrils.

The chamber itself looked a bit like a shower cubicle, albeit a very fancy one. I dashed inside and the clock on my three-minute treatment (£95) started. It might not sound like much time, but exposing the body to these temperatures for longer can be risky. Just a few minutes is enough for people to feel the benefit.

There was no denying it was bitterly cold inside but, surprisingly, it was nowhere near as bad as I feared. In fact, the treatment was invigorating.

As music blasted through the speakers, I realised I was rather enjoying myself. My instructor – standing on the other side of the door – encouraged me to keep moving and dance along.

I adopted a strange shuffle, akin to a penguin, and bopped along to the beat.

Afterwards, stepping outside into the warmth, the rush was exhilarating. I felt energised, my foggy head seemed clear, and my legs a little less sore. If only more days could start like this.

What’s the difference between measles and German measles?

Measles is a highly infectious viral illness, which often begins with a cough and cold symptoms such as a high temperature, runny nose and sore eyes. A rash of small reddish-brown spots often appears about two to four days later.

There’s no treatment, but symptoms will usually clear up after a week. 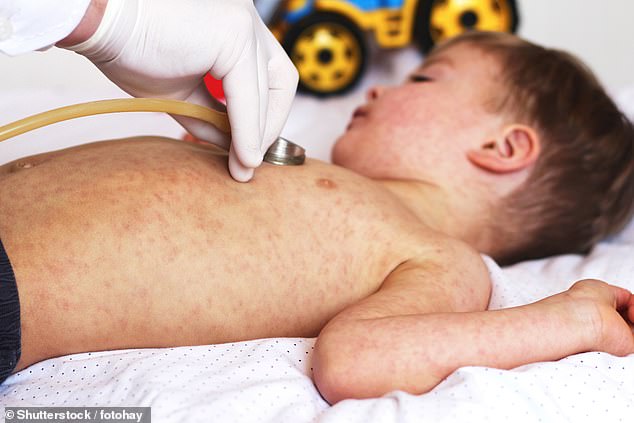 Measles is a highly infectious viral illness, which often begins with a cough and cold symptoms such as a high temperature, runny nose and sore eyes (file image of child with measles)

German measles, also known as rubella, is highly infectious too, but much rarer. It also causes a rash, which is usually red or pink and spotty, and can be accompanied by symptoms including aching joints.

Infected patients mostly get better in a week, but it can be very serious if you catch it while pregnant.

The MMR vaccination routinely given to children will protect against both measles and rubella.

Health hacks: Do you get sleepy during a long drive?

Don’t just rely on coffee – you need a mini-snooze too. Studies have shown that drinking a cup of black coffee, followed by a 20-minute snooze, will keep you alert for the longest time possible.

Apply this rich, fragrant cream – abundant in calming eucalyptus and camphor – to pressure points and take a series of deep breaths for instant stress relief.