Richard Branson’s aerospace company has reached the edge of space for the second time.

Following weather-related delays earlier this week, Virgin Galactic’s SpaceShipTwo took to the skies today for its fifth supersonic test flight, and the second to reach an altitude of about 50 miles above Earth’s surface – the point at which NASA astronauts are granted their wings.

The WhiteKnightTwo ‘mothership’ took off in the Mojave Desert around 8:00 a.m. PT (11 a.m. ET) Friday morning carrying SpaceShipTwo, before the supersonic plane separated to climb higher into the sky on its own and accelerate to hit Mach 3, or three times the speed of sound.

At the boundary of space, the crew-members momentarily experienced weightlessness as they traveled in micro-gravity. And, for the first time, the flight included a passenger apart from its two pilots.

Richard Branson’s aerospace company lifted off for its second attempt to reach the edge of space following its milestone accomplishment last December. WhiteKnightTwo and SpaceShipTwo could be seen flying together just after liftoff, for the firm’s fifth supersonic powered test flight 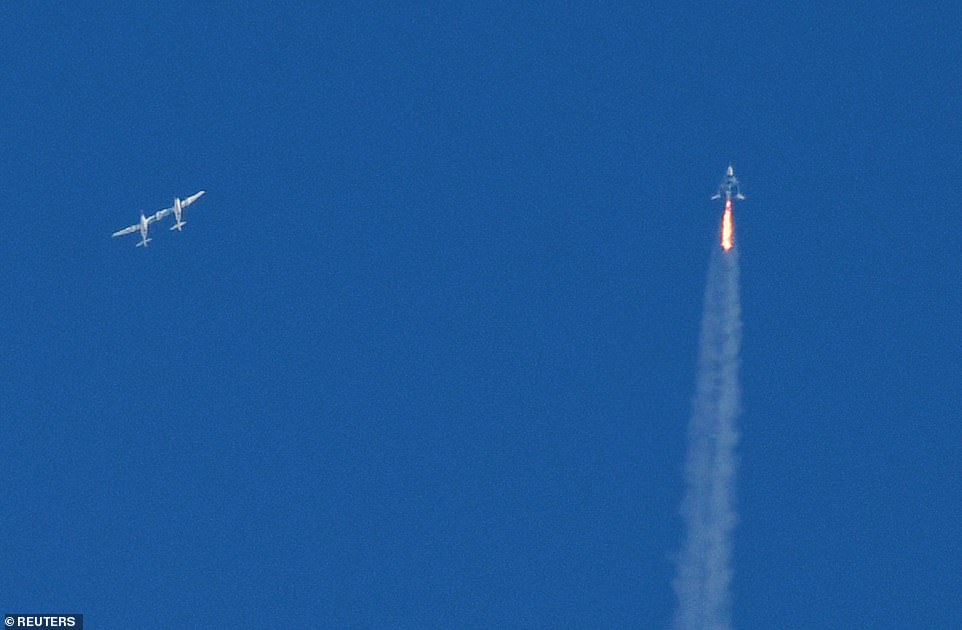 Richard Branson’s aerospace company has reached the edge of space for the second time. The firm confirmed the success on Twitter roughly an hour after liftoff

HOW HIGH DID IT GO?

Virgin Galactic uses an altitude of 50 miles (80 km) to designate the boundary of space.

This is used by NASA and the U.S. Air Force for awarding astronaut wings.

‘For Virgin Galactic, the major milestone that we perceive is the altitude at which NASA and Air Force folks get their astronaut wings, which is 50 miles,’ George Whitesides, chief executive of Virgin Galactic, said last month.

The long-held view, however, is that the edge of space begins higher than this, at an altitude of 62 miles (100km).

The pair was also joined by a third crew member in the cabin, micro-gravity expert Chief Astronaut Instructor Beth Moses, who will ‘provide human validation for the data’ collected during the flight.

And, the supersonic plane carried NASA payloads for the second time in effort to put the craft at approximate commercial weight, Virgin Galactic said.

Virgin remained characteristically guarded about exactly when the plane was scheduled to take off following Wednesday’s scrubbed flight.

It wasn’t until just minutes before the rescheduled test that the firm finally revealed when the plane would be lifting off.

‘We’re expanding the weight distribution in the spaceship during this next test flight to test the vehicle’s handling qualities. This will provide us with valuable flight data.’

The two aircraft, with SpaceShipTwo mated to the underbelly of WhiteKnightTwo, climbed to tens of thousands of feet within a matter of minutes, before SpaceShipTwo eventually released at an altitude of around 45,000ft to continue the journey alone. With its rocket motor ignited, SpaceaShipTwo topped out at Mach 3 speed. 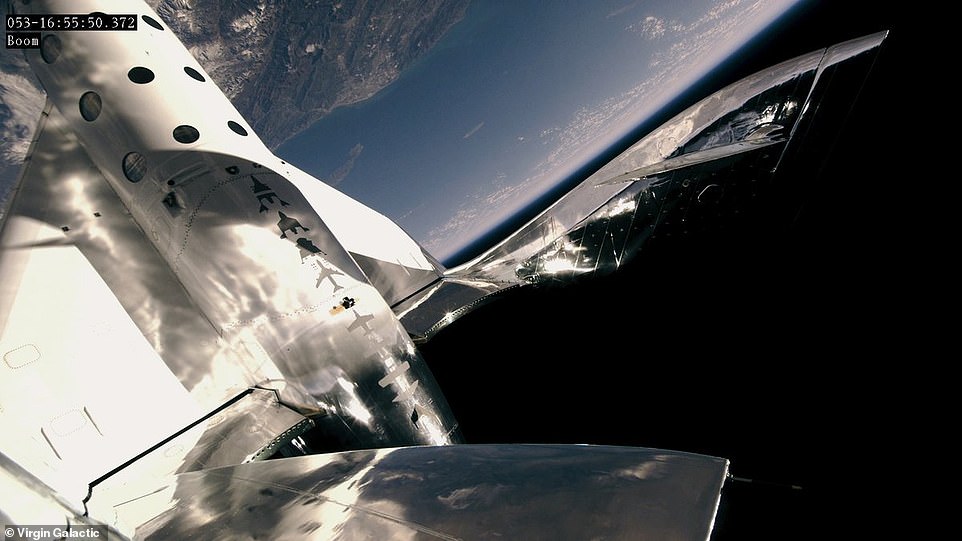 After the successful flight, Virgin Galactic confirmed the plane soared as high as 55.85 miles, or 294,9007 feet (89.9 kilometers). It can be seen above flying high over Earth’s surface during the test 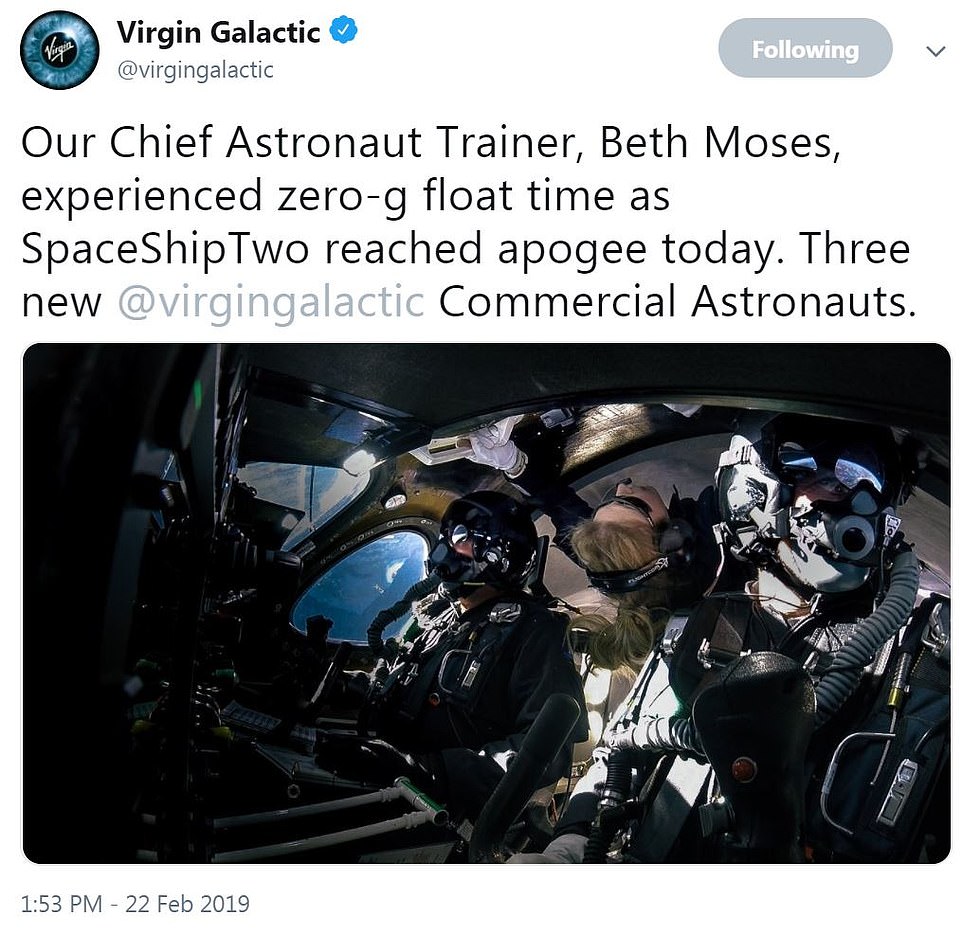 In the cockpit of the supersonic plane sat two seasoned pilots, Chief Pilot Dave Mackay and Pilot Mike ‘Sooch’ Masucci. The pair was also joined by a third crew member in the cabin, micro-gravity expert Chief Astronaut Instructor Beth Moses, who will ‘provide human validation for the data’ collected during the flight. The trio can be seen during the flight, above

The company first reached the edge of space on December 13, 2018 in a landmark achievement for Richard Branson’s space tourism endeavors. And after the successful test, the founder said his own spaceflight will follow in a matter of months.

Speaking to CBSN from California’s Mojave Desert just after the flight test, Branson said he’s ‘itching to go’ to space, and estimated he’d get there within the next six months.

Virgin Galactic plans to conduct two or three more tests of this kind, and move its operations to New Mexico before sending Branson flying more than 250,000 feet above Earth.

The aerospace firm’s SpaceShipTwo craft reached a boundary more than 50 miles above Earth on December 13 morning for the first time, after blasting off on a critical flight test in the Mojave Desert.

To do this, the company had to push its rocket motor to the longest burn duration yet, ‘resulting in us going higher than we have before.’

The WhiteKnightTwo ‘mothership’ took off in the Mojave Desert around 8:00 a.m. PT (11 a.m. ET) Friday morning carrying SpaceShipTwo, which separated at the release altitude to climb higher into the sky on its own and accelerate to speeds faster than the speed of sound 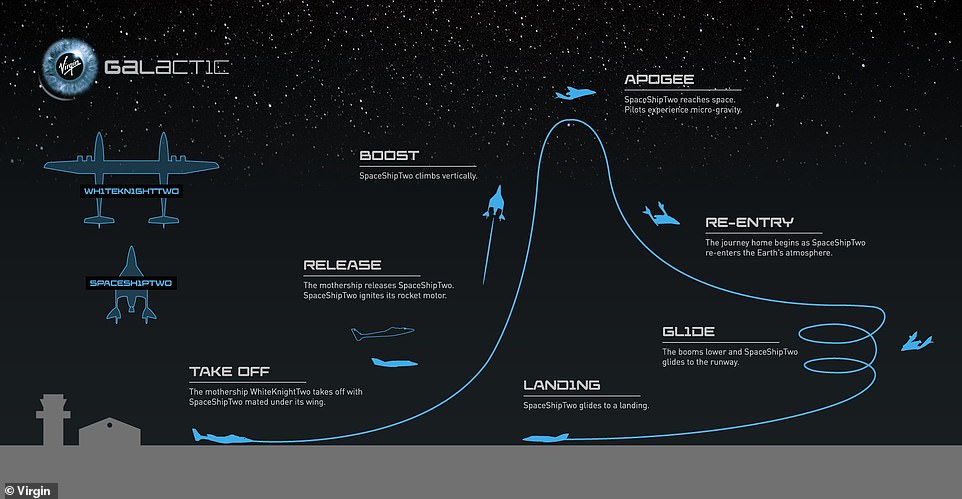 SpaceShipTwo will take off piggybacking on WhiteKnightTwo. The two craft will ascend together before splitting off, allowing SpaceShipTwo to continue to rise and eventually hit supersonic speeds

In addition to its pilots, the aircraft carried NASA payloads for the first time, in effort to bring it as close as possible to commercial weight.

SpaceShipTwo safely touched back down to Earth less than 15 minutes after achieving its flight and hitting speeds of nearly three times the speed of sound.

‘Today, for the first time in history, a crewed spaceship, built to carry private passengers, reached space,’ Virgin Galactic founder Richard Branson said from the flight line after the successful flight in December.

‘Today we completed our first revenue generating flight and our pilots earned their Commercial Astronaut Wings. Today, we have shown that Virgin Galactic really can open space to change the world for good.’ 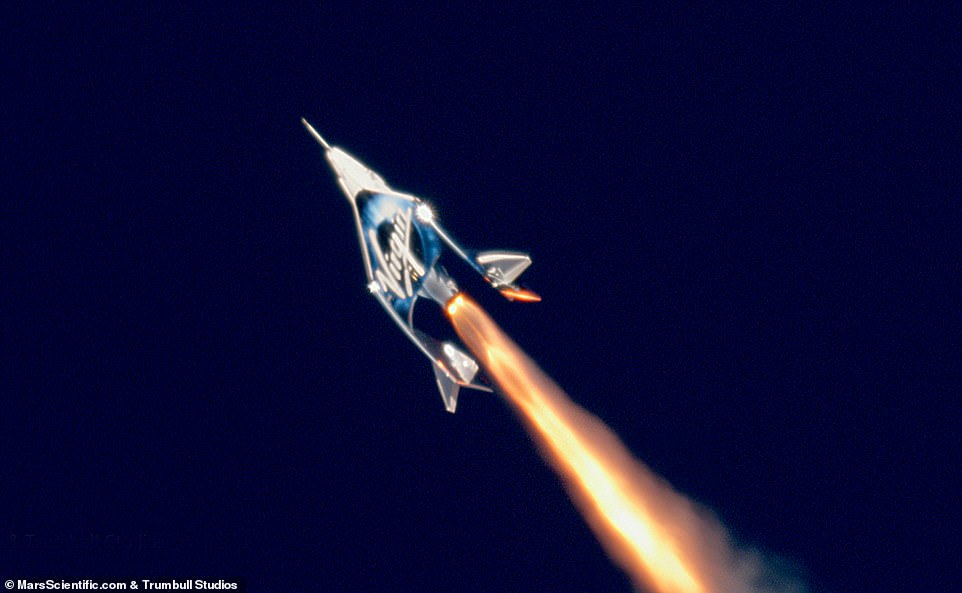 The company reached the edge of space for the first time on December 13, 2018 in a milestone accomplishment for Richard Branson’s space tourism endeavors. An image from the last successful flight is pictured 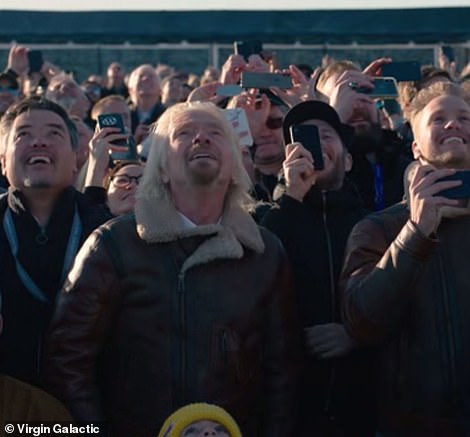 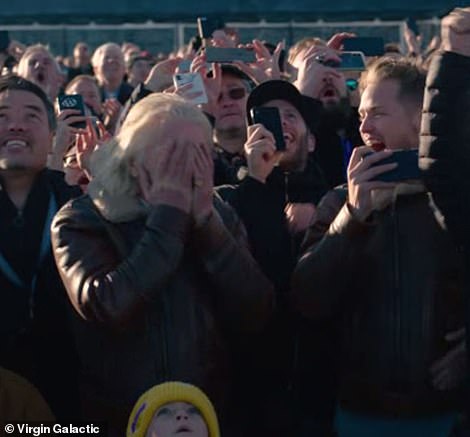 ‘Ever since I watched the moon landings as a child I have looked up to the skies with wonder,’ Branson said after the successful test in December. ‘Today, as I stood among a truly remarkable group of people with our eyes on the stars, we saw our biggest dream and our toughest challenge to date fulfilled.’ The founder couldn’t hold back tears 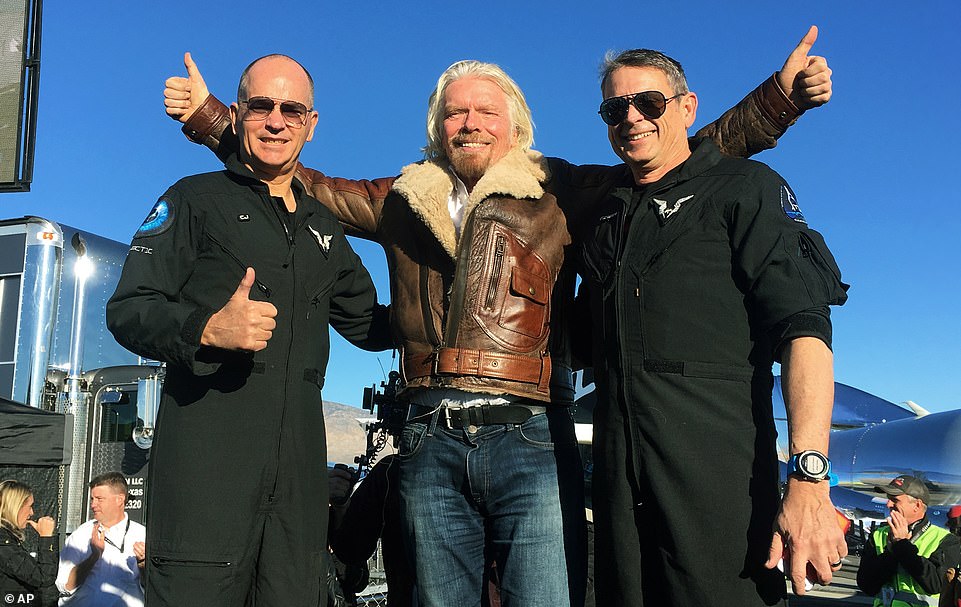 ‘This is a momentous day and I could not be more proud of our teams who together have opened a new chapter of space exploration,’ Branson said afterwards.