SpaceX is one step closer towards ferrying astronauts to the International Space Station, dubbed by many as the start of a ‘new era for human spaceflight.’

Elon Musk’s rocket company has completed the installation of a Crew Access Arm that will serve as a walkway for astronauts boarding the Crew Dragon capsule.

Four astronauts will walk across the futuristic bridge from a crew access tower at the historic 39A launchpad at NASA’s Kennedy Space Center to the Dragon, which will blast them into space.

Four astronauts will walk across the futuristic bridge from a crew access tower at the historic 39A launchpad at NASA’s Kennedy Space Center to the Dragon, which will blast them into space.

‘Crew access arm installed at Launch Complex 39A in Florida; will serve as a bridge for @NASA astronauts to board Crew Dragon,’ SpaceX said in a tweet.

The firm is aiming for its first crewed flight in April 2019, while an uncrewed test flight will take place in November 2018.

SpaceX’s crew flight test will be led by astronauts Bob Behnken and Doug Hurley, with plans to lift off from the Kennedy Space Center in April 2019.

Crew Dragon can hold up to seven astronauts at one time, but the manned mission will only include four men on board.

The Crew Dragon capsule will blast off from launchpad 39A atop a 230-feet-tall Falcon 9 rocket. 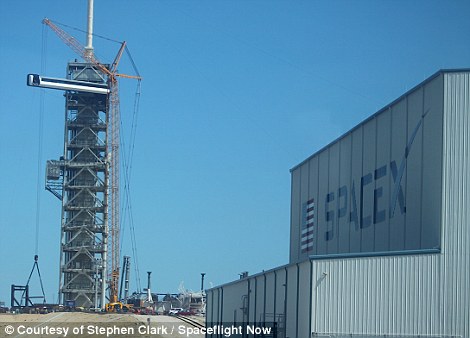 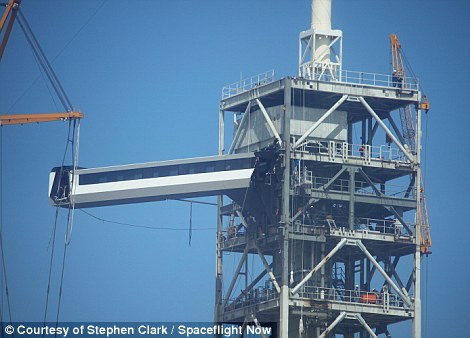 SpaceX has been installing the Crew Access Arm at Kennedy Space Center’s 39A launchpad for several weeks. The firm finished positioning it on a fixed service structure last week

It will surely be a landmark moment for US space exploration, as it will signify the first human spaceflight mission since 2011, when NASA’s Space Shuttle was retired.

The Space Shuttle was a reusable spacecraft that ferried astronauts to and from earth and the International Space Station.

After the Space Shuttle retired, the US was forced to rely on Russia for spacecraft that could transport astronauts to the ISS. 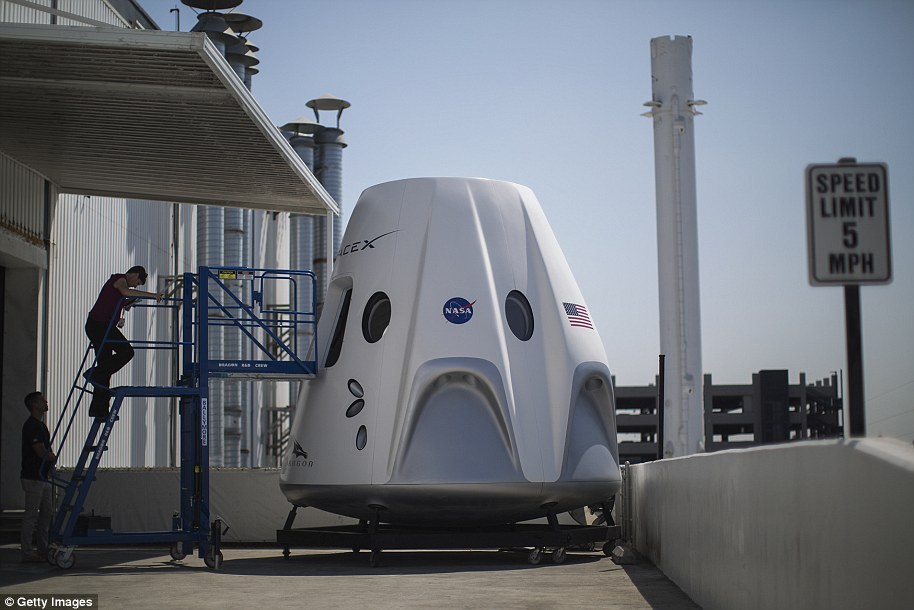 SpaceX’s Crew Dragon capsule measures 20 feet tall by 12 feet in diameter, and will carry up to 7 astronauts at a time. However, the manned flight will have four astronauts on board 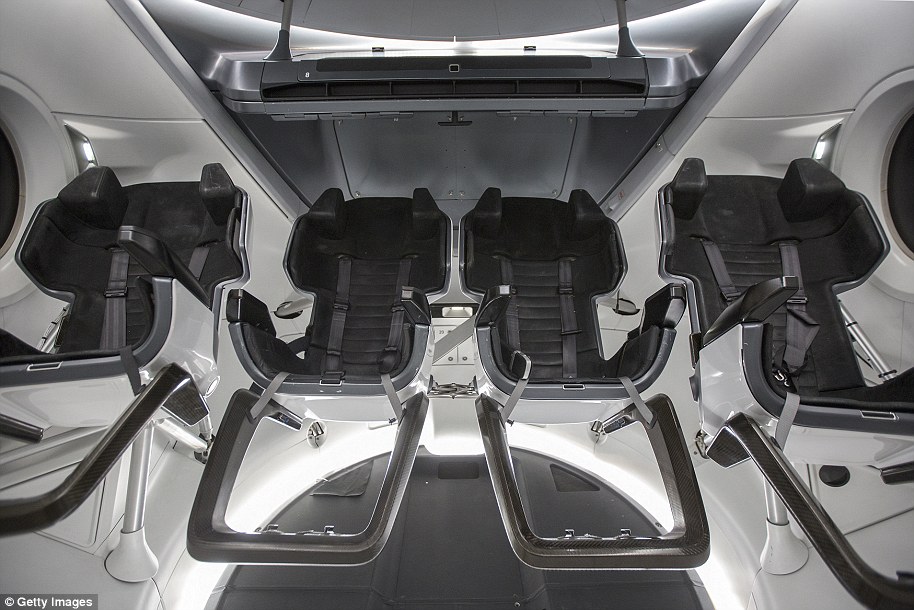 Pictured is the Crew Dragon spacecraft simulator. The Crew Dragon features an advanced emergency escape system to swiftly carry astronauts to safety if something were to go wrong 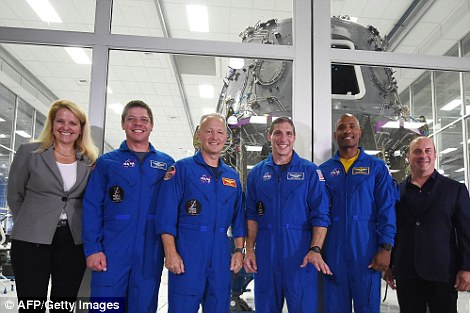 Crew Dragon and Boeing’s CST-100 Starliner will take the place of the now-defunct Spae Shuttle, as they each have crewed demonstration missions planned for later this year.

Even more historic, the spacecrafts will blast off from the same launchpad used for NASA’s Apollo 11 mission, which landed Neil Armstrong and Buzz Aldrin on the moon.

The launchpad, which was built in 1967, was also where Apollo 13 launched into orbit.

The access arm has been in development for several months now, but was installed at the complex on Monday.

It hangs roughly 200ft above the ground – or about 70ft higher than where the former Space Shuttle access arm was constructed – and will be kept in pristine condition.

WHEN DID NASA LAST LAUNCH CREWED MISSIONS FROM THE US?

Columbia was only the beginning; following in its footsteps, NASA launched Challenger, Discovery, Atlantis, and Endeavor to carry people to orbit.

These launches also allowed for the construction of the International Space Station – the largest structure in space, that’s now home to a revolving crew of astronauts from all around the world, conducting important experiments that continue to advance our knowledge of the cosmos.

In the years since, NASA has had to rely on Russian modules to send astronauts to the ISS, all of which launch from foreign soil.

Now, the space agency is stepping up efforts to bring crewed launches back home.

On August 3, 2018, NASA revealed the nine astronauts that will soon take to space aboard the Boeing CST-100 Starliner and SpaceX Crew Dragon, to pioneer a ‘new era in American spaceflight.’

The crew flight tests will launch from the Kennedy Space Center in 2019.

The shuttle missions came to an end with the Atlantis shuttle on July 21, 2011 after STS-135. Above, Atlantis lands at the Kennedy Space Center at Cape Canaveral, Fl, marking the official end of the 30-year program

According to NASA, SpaceX continues to modify Launch Complex 39A from its earlier state, by removing over 500,000lbs of steel from the pad structure. 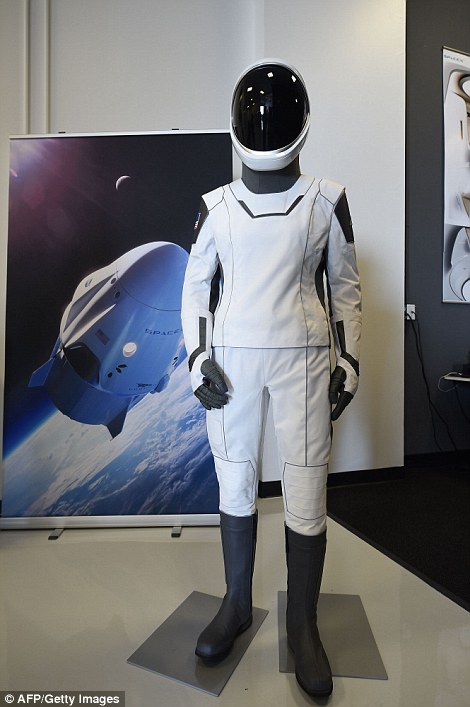 In addition to the Crew Dragon mission, SpaceX is also using 39A to send cargo to the ISS, as well as to launch commercial payloads.

The first SpaceX mission from the historic launchpad took place in February.

Before SpaceX is able to conduct its manned mission to the ISS, it has to complete an unmanned test misision.

For the manned demonstration, called DEMO-2, the Crew Dragon will dock and undock with the ISS and then return back to earth.

NASA will examine data from the flight and make sure that it meets certain safety and performance requirements.

This will determine whether or not the spacecraft is suitable for regular trips to the ISS in the future.

While uncrewed flight tests were not required, both Boeing and SpaceX have volunteered to perform them before adding astronauts.

‘This was above and beyond the NASA requirement in the contract,’ said Kathy Lueders, Commercial Crew Program manager at NASA Kennedy.

Since the late 1960s, Pads A and B at Kennedy Space Center’s Launch Complex 39 have served as backdrops for America’s most significant manned space flight endeavors – Apollo, Skylab, Apollo-Soyuz and space shuttle.

Located on Merritt Island, Fla., just north of Cape Canaveral, the pads were originally built for the huge Apollo/Saturn V rockets that launched American astronauts on their historic journeys to the moon and back. 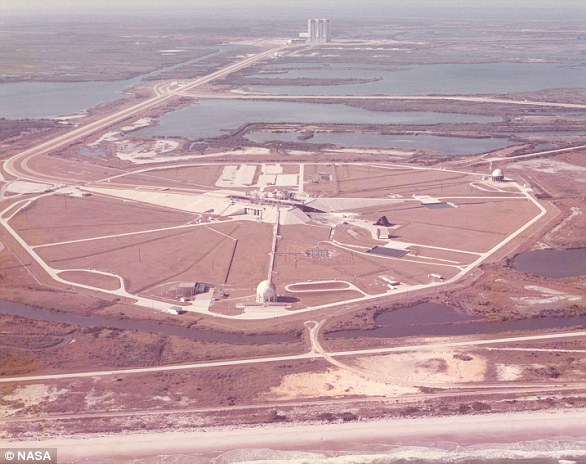 Both pads were designed to support the concept of mobile launch operations, in which space vehicles are checked out and assembled in the protected environment of the Orbiter Processing Facility and the Vehicle Assembly Building, then transported by large, tracked crawlers to the launch pad for final processing and launch.

During the Apollo era, key pad service structures were mobile.

On April 12, 1981, shuttle operations commenced at Pad A with the launch of Columbia on STS-1.

After 23 more successful launches from A, the first space shuttle to lift off from Pad B was the ill-fated Challenger in January 1986.

Pad B was designated for the resumption of shuttle flights in September 1988, followed by the reactivation of Pad A in January 1990.

With the upcoming tests, NASA is now closer than it has been in nearly a decade to launching astronauts from the US, aboard capsules made here at home.