SpaceX racks up another rocket launch, its 16th this year

SpaceX has racked up another rocket launch, its 16th this year.

A Falcon 9 SpaceX rocket carrying a Koreasat 5A communications satellite lifts off from pad 39A at the Kennedy Space Center in Cape Canaveral, Fla., Monday, Oct. 30, 2017.

The tall, white rocket rumbled and roared into the blue sky over Cape Canaveral, Florida at 3:34 pm (1934 GMT), propelling Koreasat-5A toward a distant, geostationary orbit some 22,000 miles (36,000 kilometers) from Earth.

The satellite is designed to replace an earlier version, called Koreasat 5, which launched in 2006.

This newest Koreasat will replace a failed satellite launched in 2006, and serve both Asia and the Middle East.

Once separated, the 15-story first-stage booster flew to a floating platform in the Atlantic and landed upright.

The TV link of the touchdown was lost.

But SpaceX confirmed success despite the choppy seas and some flames shooting from the landed booster.

The fire went out.

‘A little toasty, but stage one is certainly still intact,’ said the launch commentator from company headquarters in Hawthorne, California.

SpaceX expects to reuse the booster to save time and money.

The company has launched almost every month this year – a personal record – flying Falcons from both U.S. coasts. 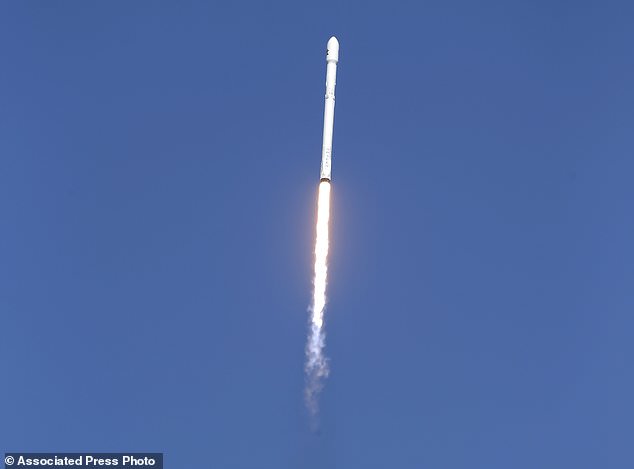 A Falcon 9 SpaceX rocket carrying a Koreasat 5A communications satellite lifts off from at the Kennedy Space Center in Cape Canaveral, Fla., Monday, Oct. 30, 2017.

Just minutes after launch, the rocket separated and the tall portion, called the first stage, fired its engines and maneuvered its grid fins to guide itself back to an upright landing on an ocean platform.

Less than nine minutes after takeoff, the scorched rocket touched down on a droneship marked with an X and labeled “Of Course I Still Love You.”

So far, the company has managed to land more than a dozen rockets after take-off, whether on solid ground or floating ocean platforms.

The goal is to save money and eventually bring down the cost of space travel. 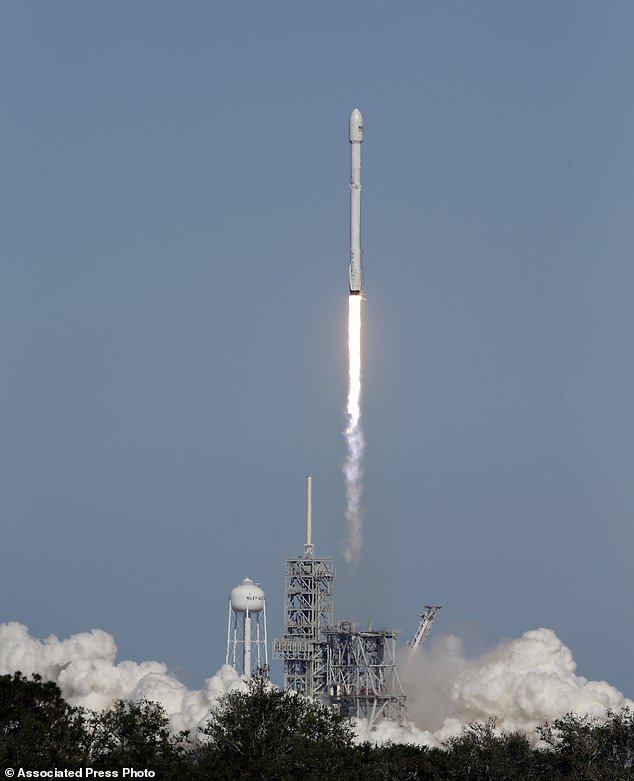 A Falcon 9 SpaceX rocket carrying a Koreasat 5A communications satellite lifts off at the Kennedy Space Center in Cape Canaveral, Fla., Monday, Oct. 30, 2017.