Elon Musk’s vision of sending humans to Mars on the SpaceX Starship rocket has been delayed again.

The SN5 prototype was set make a 492 foot ‘hop’ Tuesday at the firm’s Boca Chica site in Texas, but was aborted around 12:30pm ET.

The Starship completed a serious of tests leading up to liftoff, but the mission was scrubbed minutes following the siren stage.

Plumes of liquid oxygen reaching nearly 100 feet in the air began flowing from the craft, which are said to be a result of an emergency detanking.

Although there was a malfunction in the afternoon, SpaceX has kept the ‘hop’ window open until 8pm ET.

The initial launch was originally scheduled for yesterday but the test was scrubbed due to the turbopump spin start valve not opening in the giant Raptor engine.

SN5 completed seven key tests that led up to ‘liftoff,’ but following the 11:24 ET siren point, it began smoking.

The team began a flare purge about 10 minutes later to releave the pressure and eliminate the plume.

The prototype left the rocket factory in June for the testing site in Boca Chia, Texas – less than a month after the fourth prototype exploded.

This latest test sees the SpaceX Starship SN5 prototype ‘hop’ 492ft into the air and back down again – its first test flight.

It is only possible due to the fact the giant 160ft spaceship was able to survive a static fire test at the end of July.

The prototype doesn’t have all the features of a traditional rocket as it has no nose cone, flaps or other structural features designed to guide it through the upper atmosphere and on to Mars.

However, the guts of the vehicle including a single Raptor engine and large liquid oxygen and methane fuel tanks are in place.

The test flight is designed to test the integrity of those systems and software used to steer the launch and landing of the full-sized version of the prototype.

This isn’t the first ‘hop’ for SpaceX – they were able to successfully launch a short ‘Starhopper’ prototype 500ft into the air – this will be the first test of the full ship.

Musk envisions the Starship will operate much like a commercial airliner by transporting paying customers to the surface of the Moon and Mars.

Musk previously said the lifetime of each Starship will be around 20 to 30 years, ‘like an aircraft’.

Around three Starship flights will launch from Earth per day, or around 1,000 flights a year, and each will have a capacity of more than 90,000 pounds.

By continuously ferrying people the 180 million miles to Mars, Musk is predicting 1,000 human inhabitants by 2030 and ‘maybe around’ one million by 2050.

However, if SpaceX’s track record continues down the same path, the billionaire may never get the change to colonize Mars. 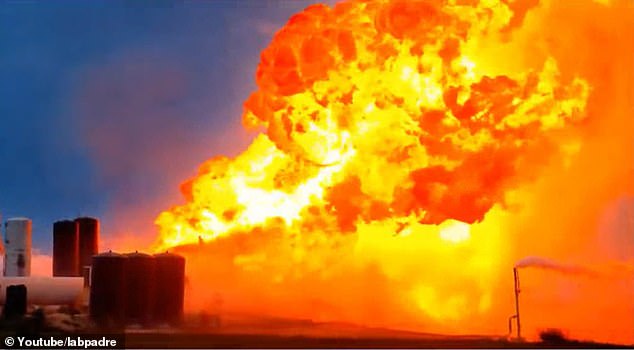 The news follows a number of failed Starship tests, as Musk has watched four of the Mars bound rockets burst into flames at the launch site. The prototype Serial Number 4 vanished into a fireball in May (pictured) shortly the engine was ignited for a pressurized test

In May, the prototype Serial Number 4 vanished into a fireball at SpaceX’s site in Texas shortly the engine was ignited for a pressurized test.

The SN4 had passed several important milestones during development, including a pressurization test that had foiled previous models.

The first rocket was tested in 2019, Mk1 prototype, but was engulfed in flames during a cryogenic pressure test.

The second rocket, dubbed Serial Number 1 (SN1), fell victim to another pressure test when it failed to contain its liquid nitrogen. 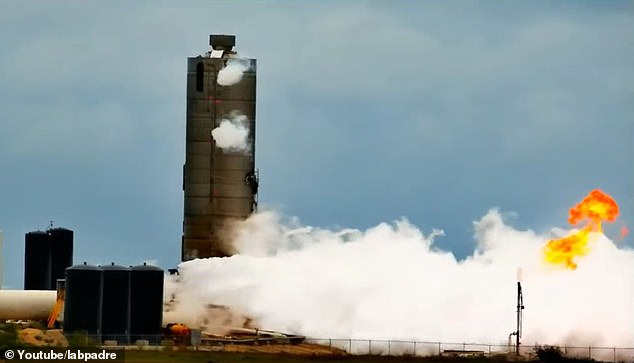 This was the fourth Starship rocket that has been lost while testing – all of the the previous vessels also imploded during testing. It began smoking shortly after the test began 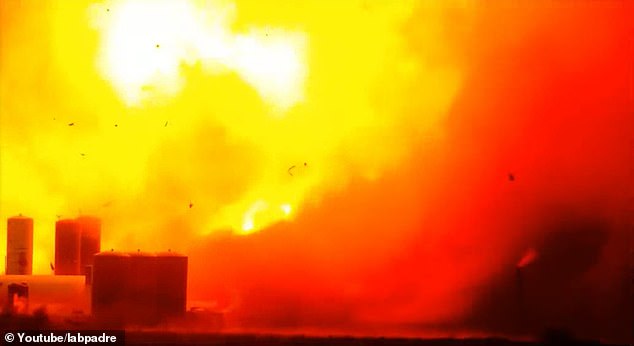 And in seconds was engulfed in a ball of flames. The SN4 had passed several important milestones during development, including a pressurization test that had foiled previous models

However, this time the stainless steel cylinder flew off the stand and came down crashing .

And the third time SpaceX saw its third catastrophic failure was in April – again the Starship prototype imploded during the cryogenic pressure test.

It’s been a successful year for the Elon Musk-owned space firm.

Among its achievements are the fact it launched and returned the first astronauts for the International Space Station from US soil in nearly a decade.

SpaceX is also due to launch its Starlink internet broadband service to customers later this year after putting nearly 600 satellites into orbit.

It is also one of three companies in the running to build a lunar Human Landing system for NASA alongside Jeff Bezos-owned Blue Origin and Dynetics. 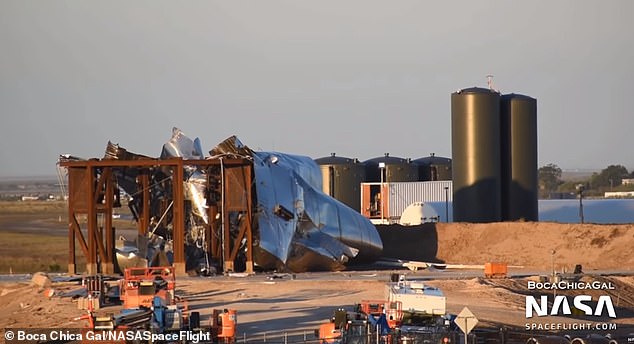 The second rocket, dubbed Serial Number 1 (SN1), fell victim to another pressure test when it failed to contain its liquid nitrogen. The top went flying off the rocket that was left mangled on the test pad

SPACEX STARSHIP: ELON MUSK PLANS TO SEND THE GIANT ‘CREWED’ SPACESHIP TO MARS AND BACK

The BFR (Big F***ing Rocket), now known as Starship, has been designed as a passenger and cargo spaceship that can go to Mars or put satellites into orbit.

Elon Musk, SpaceX Chief Engineer said the rocket would take its first trip to the red planet in 2022, carrying only cargo.

It will be followed by a crewed mission in 2024 and, according to Musk, other SpaceX’s products would be ‘cannibalised’ to pay for it.

It could also be used for ‘hops’ to the Moon and SpaceX is one of three firms shortlisted to build a human lunar lander for NASA.