Four amateur astronauts, who last month became the first all-civilian crew ever to orbit the Earth, have received their ceremonial wings from SpaceX.

The Inspiration4 team launched on a Crew Dragon capsule from Florida on September 15 and splashed down in the Atlantic Ocean three days later.

They were led by billionaire Jared Isaacman, 38, chief executive of the e-commerce firm Shift4 Payments Inc, who acted as mission ‘commander’. 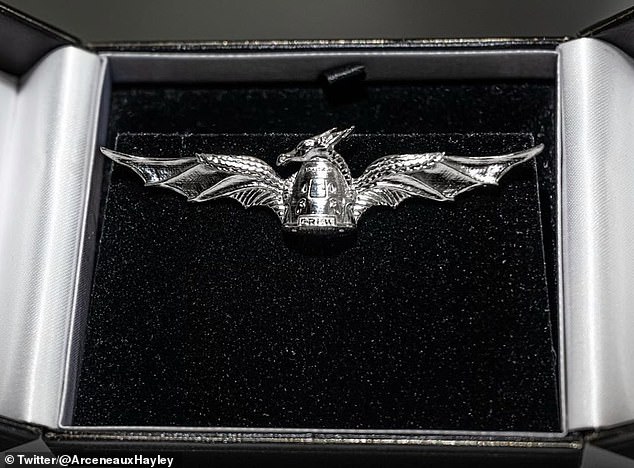 The wings pin has a Crew Dragon capsule in the middle, with a dragon’s head and wings emerging from it. The back is inscribed with each crew member’s name, call sign and role

WHAT IS THE HISTORY OF AWARDING PEOPLE ASTRONAUT WINGS?

Alan Shepard Jr and Virgil Grissom were the first astronauts to be awarded astronaut wings.

They received them for their participation in the Mercury Seven programme in the early 1960s.

There are three other ways to earn astronaut wings in the US – either through the military, Nasa or be nominated for them in the Commercial Astronaut Wings programme.

However, the Federal Aviation Administration (FAA) announced new rules for the programme on the same day that Amazon’s Jeff Bezos flew to the edge of space aboard his Blue Origin rocket in July.

The FAA now says astronaut hopefuls must be part of the flight crew and make contributions to space flight safety, bringing into question whether Bezos and Sir Richard Branson are actually astronauts in the eyes of the US government following their respective space flights.

Two officials from the body have also reportedly said the Inspiration4 team are considered ‘spaceflight participants’ as a substitute for ‘crew’ in SpaceX’s FAA license application, meaning they wouldn’t receive official astronaut wings.

However, they were given out by SpaceX rather than the Federal Aviation Administration (FAA), which in July said billionaires Jeff Bezos and Sir Richard Branson may not yet be astronauts in the eyes of the US government following their space flights.

New FAA rules say astronaut hopefuls must be part of the flight crew and make contributions to space flight safety, and two officials from the body have reportedly said the Inspiration4 team are considered ‘spaceflight participants’ as a substitute for ‘crew’ in SpaceX’s FAA license application.

Nevertheless, Arceneaux, the mission’s medical officer, wrote in a Twitter post on Saturday: ‘Yesterday we were presented with our SpaceX astronaut wings.

‘This beautiful symbol of our journey means everything to me! Also if it looks like I’m crying, mind your business.’

Proctor tweeted: ‘I cried when I got my wings!’

The wings pin has a Crew Dragon capsule in the middle, with a dragon’s head and wings emerging from it.

The back is inscribed with each crew member’s name, call sign and mission role to show they are officially ‘Dragon Pilots’.

The flight was the third time Musk’s company has taken humans to space and back.

‘Congratulations @Inspiration4x !!!’ he tweeted after the quartet’s safe return.

Isaacman, who is an ‘accomplished jet pilot’ according to Inspiration4’s website, funded the trip in a private deal made with SpaceX but has not disclosed how much he paid.

He said he wanted the mission to show that space can be for everyone and not just a select few.

‘I think if orbital space flight is just the exclusive domain of a couple of countries and a select few, I don’t know how far we’re gonna get,’ he added.

During their short flight to space, the team reached an orbital altitude of approximately 364 miles above the surface of Earth.

This is the highest achieved since STS-103, a Hubble Space Telescope servicing mission in 1999, and the fifth-highest Earth orbital human spaceflight overall.

‘That was a heck of a ride for us,’ Isaacman radioed shortly after landing. ‘We’re just getting started.’ 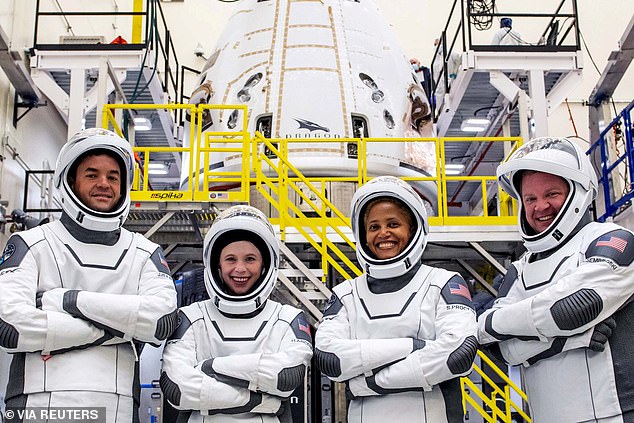 The Inspiration4 crew, the first all-civilian crew to fly to space, posed up before making their historic trip to space last month

Issacman grew up in New Jersey and started dabbling in computer technical support and repair when he was just 14 years old.

Two years later, he was offered a full time position and dropped out of high school to take the job – he later earned a GED.

He was the founding CEO and retained that role in 2015 with the company having ‘been profitable for over a decade.

By 2020, the company had been renamed Shift4 Payments, Isaacman became the CEO, and the company was processing $200 billion in payments annually.

Issacman piloted the craft and served as spacecraft commander.

Arceneaux, who is from Tennessee, was the first winner of a seat aboard the craft, who will become the youngest American in space and the first to make the journey with a prosthesis.

At the age of 10, Arceneaux was treated for bone cancer and had surgery at St. Jude to replace her knee and get a titanium rod in her left thigh bone.

She wants to show her young patients and other cancer survivors that ‘the sky is not even the limit anymore.’

Proctor was revealed as a winner this past March.

She is an entrepreneur, educator, trained pilot and active voice in the space exploration community.

She was selected as the top entrant of an independently judged online business competition that attracted approximately 200 entries and was conducted by the eCommerce platform Shift4Shop.

And an independent panel of judges chose her space art website dubbed Space2inspire. 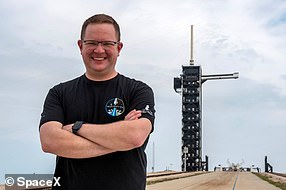 The last seat was awarded to Sembroski, who donated and entered the lottery but was not picked in the random drawing — his friend was.

His friend declined to fly for personal reasons and offered the spot to Sembroski, who worked as a Space Camp counsellor in college and volunteered for space advocacy groups.

‘Just finding out that I’m going to space was an incredible, strange, surreal event,’ he said in March.

The crew later said their trip to space was ‘awe-inspiring’ and ’emotional’.

‘That last view of the Earth in the cupola [giant window] made me emotional, because it was just so awe-inspiring, and I knew I’d be thinking about that for the rest of my life,’ Arceneaux said in the team’s first interview after landing back on Earth.

‘Our name is Inspiration,’ Proctor added. ‘To be able to capture that view and bring it back to Earth is special.’

Arceneaux, who is a St. Jude’s Children’s Research Hospital physician assistant and was treated for bone cancer at 10 years old, added that she hopes the mission will inspire people, despite the fact she thinks of herself as an ‘ordinary person.’

‘It’s hard for me to wrap my head around because I think of myself as an ordinary person, but I hope that people can relate to me,’ she said.

‘I’ve had some difficulties in life, but I think everyone has in some way,’ she continued.

‘I think everyone has had to overcome something, and I just I hope that people can look at my story and know that holding on to hope, that there will be better days, is so important.’ 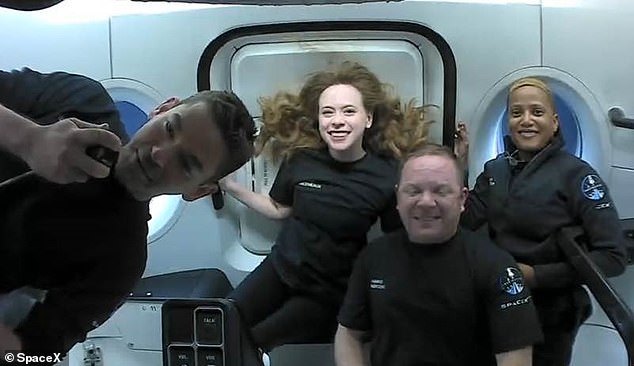 The Inspiration4 crew shared pictures of their space flight on Twitter, showing (from left to right) Jared Isaacman, Hayley Arceneaux, Chris Sembroski and Sian Proctor on board the Crew Dragon module 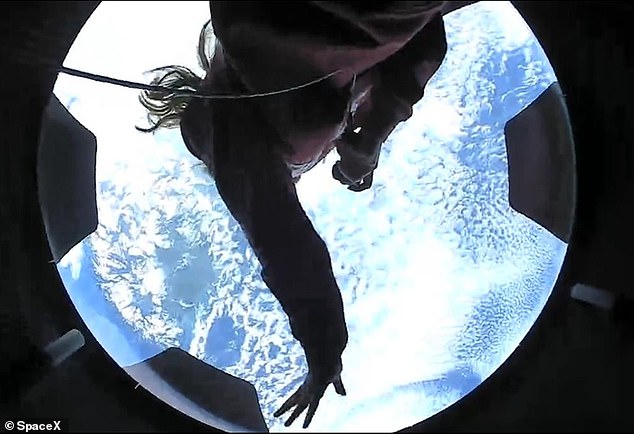 ‘The crew of Inspiration4 had an incredible first day in space,’ they wrote. ‘They’ve completed more than 15 orbits around planet Earth since liftoff and made full use of the Dragon cupola.’ Ms Acreneaux is pictured in the domed window, known as the cupola 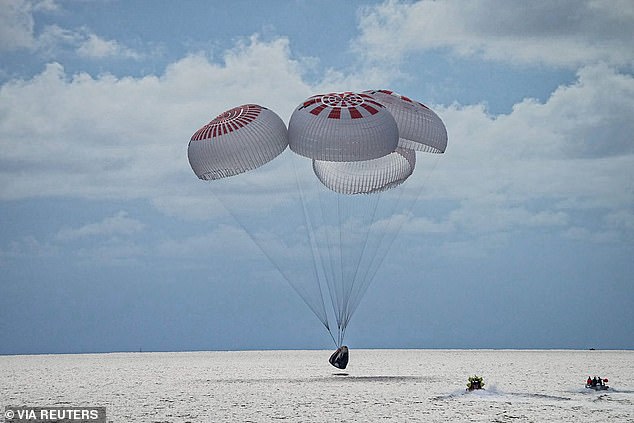 Inspiration4 launched in the SpaceX Crew Dragon Resilience on September 16 atop a Falcon 9 rocket from the Kennedy Space Centre in Florida, splashing down in the Atlantic Ocean just before midnight on September 18

The crew began their journey at 4:07pm ET on September 15, when the four individuals emerged from Hangar X from the Kennedy Space Centre in Florida.

SpaceX CEO Musk was also present to see the crew off and appeared to be just as excited as the team going to space on board the modified Crew Dragon module.

One of the modifications was the cupola, or giant window, that let the four astronauts have a panoramic view of space in the craft.

The Inspiration4 crew splashed down in the Atlantic Ocean near Florida on September 18 at 23:06 UTC, bringing an end to their historic three-day mission orbiting Earth, 360 miles above the surface.

The Dragon capsule descended towards Earth on four chutes before gently landing in the water as the module floated on the surface of the Atlantic Ocean.