Spain reported zero new deaths from coronavirus on Tuesday, the second straight day where officials claimed to have suffered no fatalities.

The country also reported that 137 new cases of the virus had been diagnosed in the previous 24 hours.

Both daily totals have fallen sharply since Spain changed the way it tallies its figures, amid accusations they are now unreliable.

Spain claimed to have suffered zero coroanvirus deaths for the second day running Tuesday, amid doubt over the numbers after they changed the way they are tallied 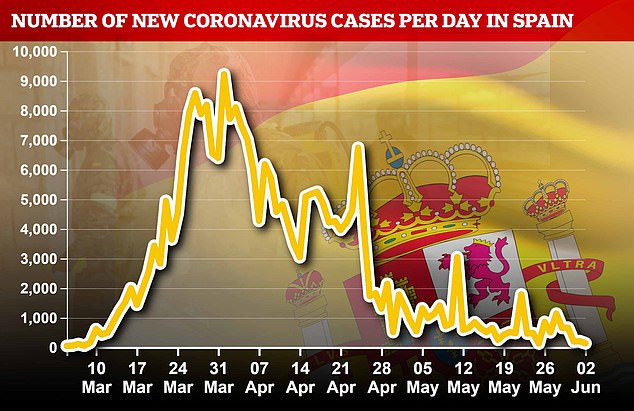 The country also claimed to have seen just 137 new coronavirus cases in the last 24 hours, though the overall total moved upwards by 293 because of how it now reports the numbers

The country’s old daily totals included all cases entered into government databases in the last 24 hours, regardless of when the actual infection or death occurred.

This is how most world countries have been reporting their data.

But Spain now only counts cases and deaths in its daily figures where the person fell sick or died within 36 hours of the report being published.

The new reporting method has caused discrepancies with Spain’s totals.

For example, the country claims to have suffered just 208 cases in the last 48 hours but its infection total has moved up by 503.

That is because the extra 295 cases have been back-dated to different days. Spain does not say as part of its daily briefing when these cases occurred.

Spain has also stopped publishing a daily death toll, though is continuing to publish its overall total – which has remained unchanged for the last 48 hours.

Instead it is publishing ‘deaths in the last seven days’, which stands at 34.

There is no way to tell exactly when in the last seven days these deaths occurred from the daily bulletin, or whether the figure has moved up or down day-to-day. 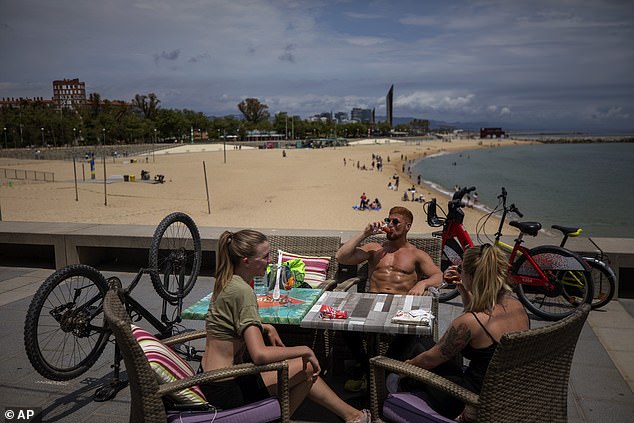 The change in how the figures are calculated comes as Spain relaxes its lockdown restrictions and tries to lure back tourists (pictured, a newly-reopened beach in Malaga)

Experts say it is ‘unlikely’ that the country has really suffered no deaths, and the ‘zero’ figure is likely the result of a data backlog.

It often takes more than 36 hours to register a cause of death.

According to the UK’s Office for National Statistics, the average time taken to register a death in England and Wales in 2018 – the most recent year for which data is available – was five days.

Experts also say the change has made the country’s R number – which is used to check whether a second peak of infection is coming – impossible to calculate.

The plunge in daily figures comes as Spain tries to tempt foreign tourists back to the country and eases its lockdown rules.

Barcelona and Madrid – two of the hardest-hit regions – are pushing for tourist attractions such as museums and galleries to be opened from Monday. 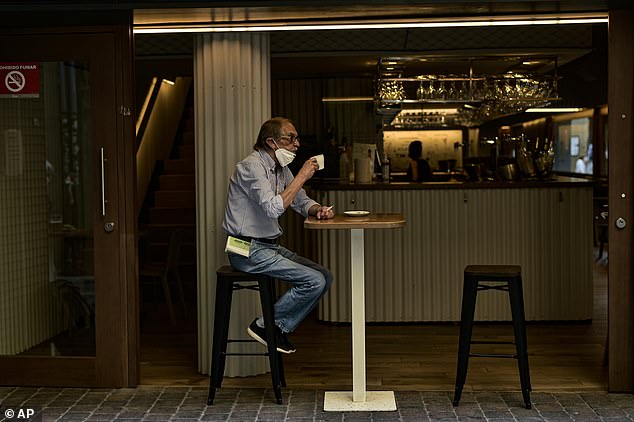 A man drinks a coffee on the outdoor terrace of a cafe in Pamplona, northern Spain, after it was allowed to reopen. More measures will ease next week

Beaches in some less-affected regions have already been allowed to reopen.

Despite the easing, the Spanish government has asked to extend a nationwide state of emergency until June 21, when most remaining restrictions on movement and business will be lifted.

The decree the Spanish Cabinet passed on Tuesday to prolong the state of emergency still needs to be approved by the lower house of parliament.

Spain’s ruling left-wing coalition has secured enough support from smaller opposition parties for the measure to be approved on Wednesday.

Government spokeswoman Maria Jesus Montero says the extension will be the last one.

But she warned that all precautions should be applied in advancing toward the post-lockdown phase the government calls the ‘new normality.’