Spain is already CLOSING beaches because they’re too packed

Spain has already started closing its beaches because they’re getting too packed, before most Britons have even had a chance to get out there.

Police closed several Andalusian beaches and turned sun seekers away to ensure social distancing after they became overcrowded over the weekend.

Beautiful Bolonia beach near the Costa de la Luz tourist resort of Tarifa was shut to visitors from 11.15am on Sunday, even though the number of foreign holidaymakers jetting to Spain is still a trickle because of the small number of holiday flights.

Nearby Valdevaqueros Beach, a popular spot for water sport enthusiasts, was also closed to new arrivals for several hours.

Beautiful Bolonia beach (pictured) near the Costa de la Luz tourist resort of Tarifa was shut to visitors from 11.15am on Sunday, even though the number of foreign holidaymakers jetting to Spain is still a trickle because of the small number of holiday flights 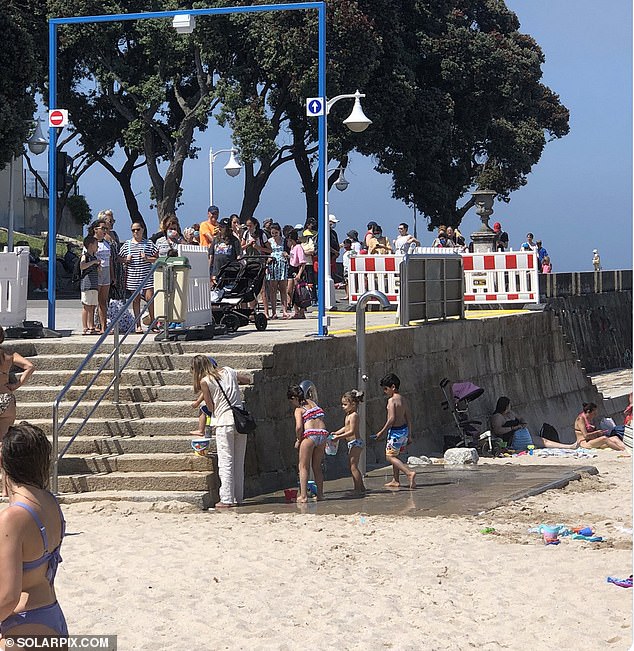 Several town halls along the Costa de la Luz, the western part of the Andalusia coastline that faces out to the Atlantic, also had to close off beaches to new arrivals just before or after midday on Sunday as Spain eased out of a three-month state of alarm and people were allowed to travel around the country.

Sun seekers on the Brit-popular Costa del Sol have so far had no problems finding a space on the beach, where sun seekers have to be around six feet apart, in most holiday resorts.

But police closed the access road to picturesque Maro Beach near Nerja on the eastern Costa del Sol after it came close to reaching its new Covid-19-linked maximum capacity limit.

Francisco Arce, councillor for Beaches for Nerja Town Hall, confirmed today the closure had occurred at 1pm local time on Sunday, saying: ‘The access road to Maro beach was closed after it reached 90 per cent of its maximum capacity, within the health security measures established because of coronavirus.

‘The maximum number of people who can be on Maro beach, so social distancing can be ensured, is 1,127 people.’ 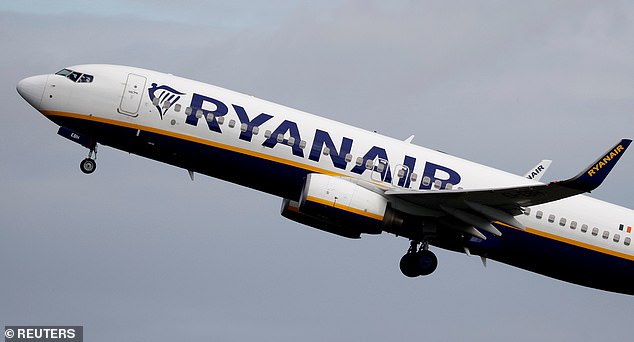 A Ryanair plane takes off from Manchester Airport as the spread of the coronavirus disease (COVID-19) continues in Manchester, Britain June 21, 2020 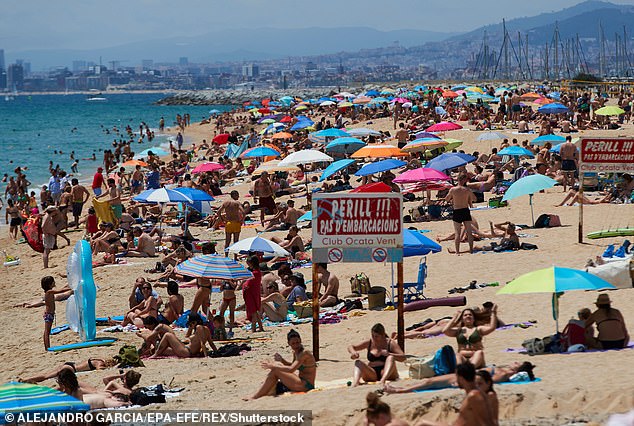 People enjoy the warm and sunny weather on the beach of Calella in Barcelona, Catalonia, Spain, 20 June 2020

British tourists venturing to the Galician city this summer will have to pass through one of 14 arches with sensors to reach the beach.

Catalonia Barcelona Golf, a three-star hotel located in the Sarrià-Sant Gervasi district of the city, from £116 per person, including flights.

Sorra d’or Beach Club, Costa Brava, a three-star hotel close to the beach from £179 per person, including flights.

Hotel Albahia, a three-star hotel in Alicante’s La Albufereta Beach from £216 per person, including flights.

Don Jorge Apartments, Benidorm, from £284 per person, including flights.

Eurostars Lecentum, a four-star hotel in the heart of Alicante from £307 per person, including flights.

Sources: On the Beach, Last Minute

They will enable the city council to inform locals and holidaymakers in real time how many people are on any of its six beaches via information screens dotted around the Atlantic surfers’ paradise.

Locals trying to reach two of the beaches – where traffic lights linked to the novel scheme turned red when they become too overcrowded turned red on Sunday afternoon – complained of having to wait up to an hour before they were allowed on the sand.

The beach closures coincided with high tide which reduced the amount of space available for sunbathing.

Several people risked fines by ignoring orders from beach monitors to wait for permission, forcing police to respond by sending more officers to the area.

One local, who abandoned plans to take a dip in the sea with her son, said afterwards: ‘The system is not working well.

‘Twenty people left in around a minute but they didn’t let another 20 in who were queuing.

‘I saw some youngsters slip through while a beach monitor controlling access was talking to some people who were waiting in line for their turn. It needs to be controlled better.’

There were no immediate reports of any problems on the Costa Blanca, although resorts like Benidorm have already made contingency plans by organising a beach pre-reservation.

The system will involve British holidaymakers having to book their spot on the beach online or at one of several reservation stands if they want to top up their tans. 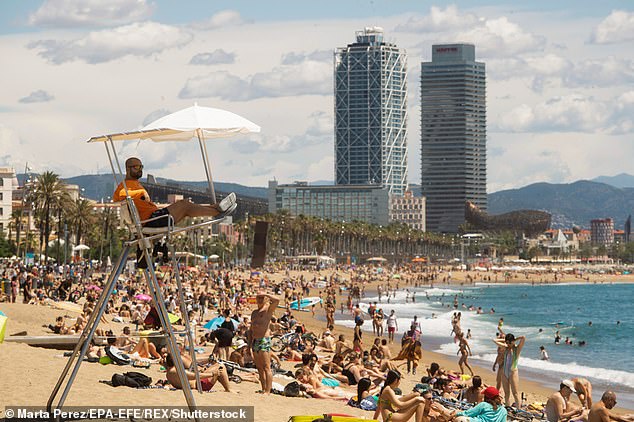 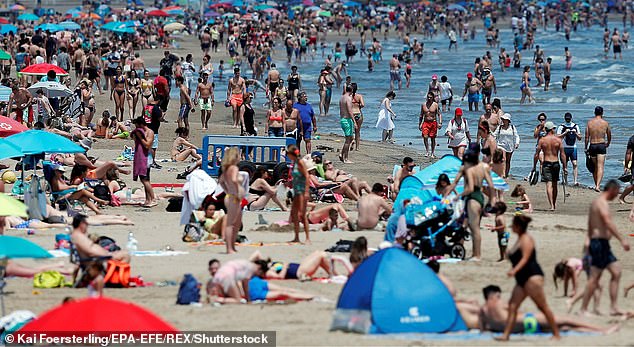 The booking scheme is not yet up and running due to the small number of tourists still arriving on Ryanair flights, but it is expected to be rolled out after easyJet and TUI resume flights in July.

The new rules are part of a so-called ‘Beach Safety Plan’.

Mayor Toni Perez says the plan is a response to social distancing rules which mean just over 25,000 people will be able to enjoy beaches that in peak season normally cater for around 40,000 sun seekers.

Under the new rules holidaymakers not opting for a beach bar sun-bed will have to stay within one of 5,000 13x13ft squares marked out on its famous Poniente and Levante beaches – colour-coded blue for general use or red for the over-70s who have been allocated designated areas.

Javier Hidalgo, councillor for Beaches for Fuengirola, also predicted there could be problems at weekends in July and August when more tourists mix with locals and day trippers and visitors from other parts of Spain. 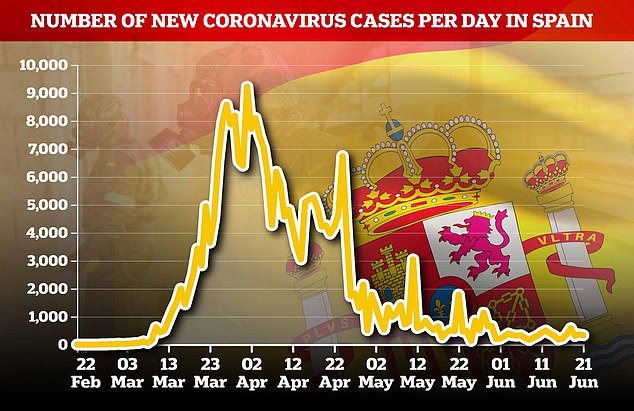 The British holiday hotspot and other Costa del Sol resorts have not followed Benidorm’s lead and opted for a pre-booking system.

But police will be expected to stop sunbathers accessing the sand if they start becoming too crowded in July and August, meaning holidaymakers might have to end up doing morning towel runs to ensure they get a good spot.

More than 50 £1,700-a-month regional council-employed beach monitors are patrolling the beach and seafront to advise locals and visitors about new rules which include a ban on ball games and lilos to ensure social distancing is respected.

Mr Hidalgo said: ‘The beaches are relatively quiet still at the moment, especially during the week, but we’re expecting there to be times further into the summer when that changes and there is a risk of overcrowding.’