To the relentless pounding of north African drums and a backdrop of screeching whistles, Spain exited this World Cup, downed by the hardest working team in the tournament and ultimately undone by their own fecklessness.

If it’s possible to control a game of football without ever having prolonged possession then Morocco showed us how to do it here. For 120 minutes, they sat in their own half and invited Luis Enrique’s Spain to come and win this game.

Spain – shorn of the imagination and intricacies of old – could not do it. In fact they failed to get anywhere near. At the end of extra-time, the statistics showed the 2010 champions had enjoyed 77 per cent of the play but had only one shot on target to show for it. That said everything for their lack of wit and guile.

And when it came to the penalty shoot-out that Morocco had sought all along, the Africans held their nerves while the Spanish lost theirs. 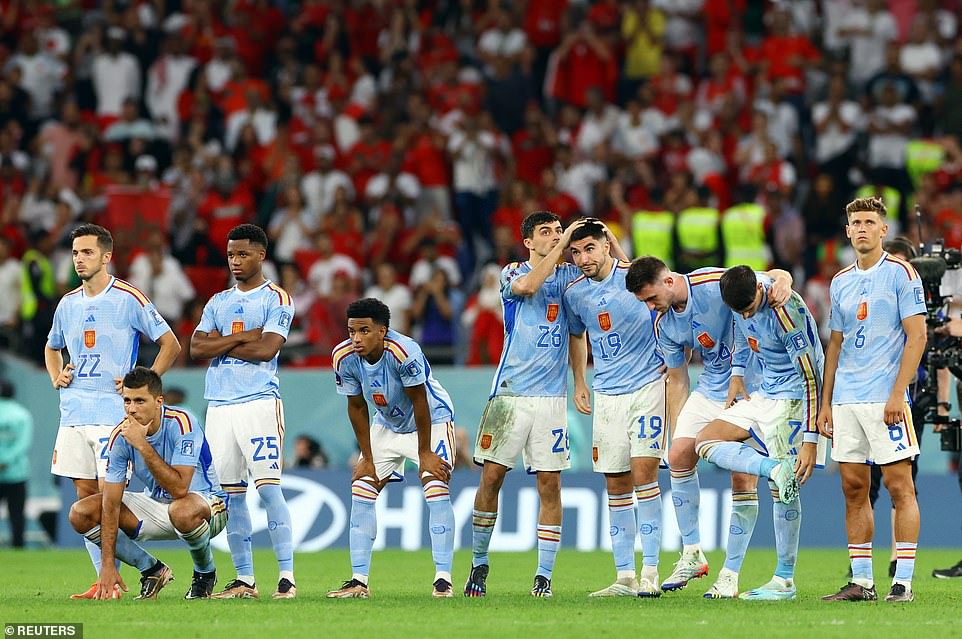 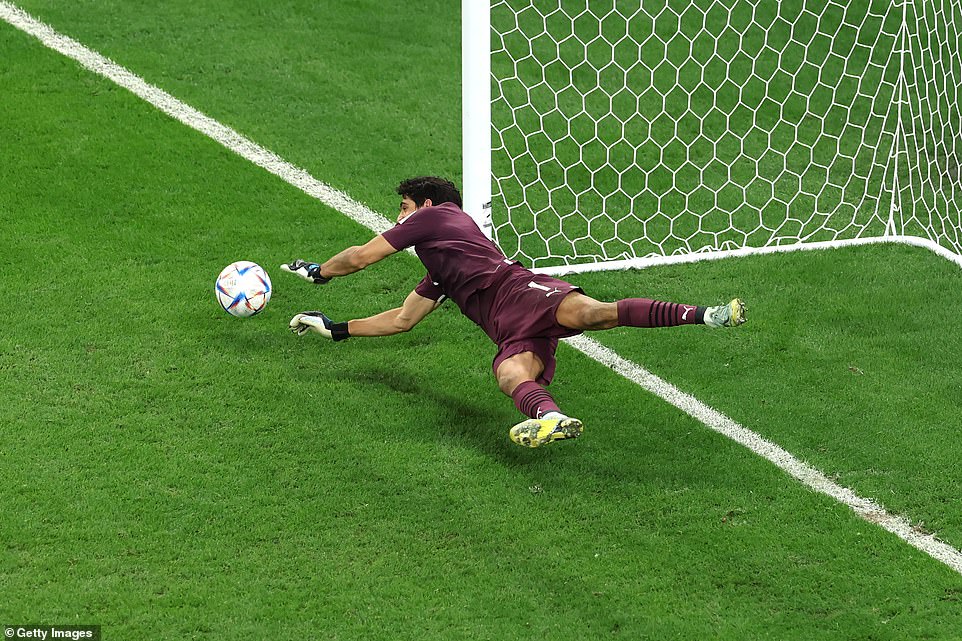 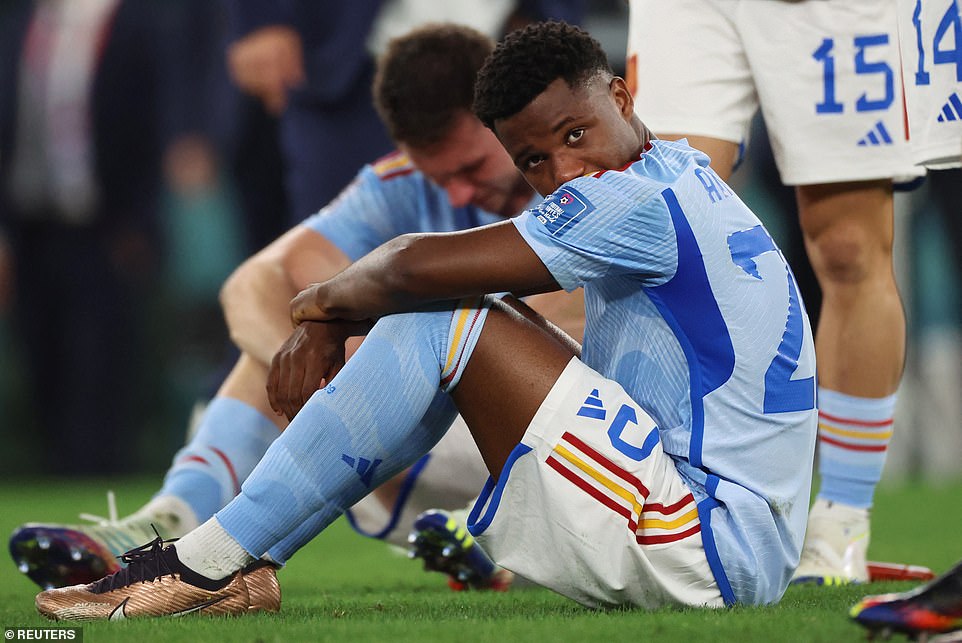 Spain players were totally dejected at the end of penalties, with Barcelona star Ansu Fati looking tearful on the turf 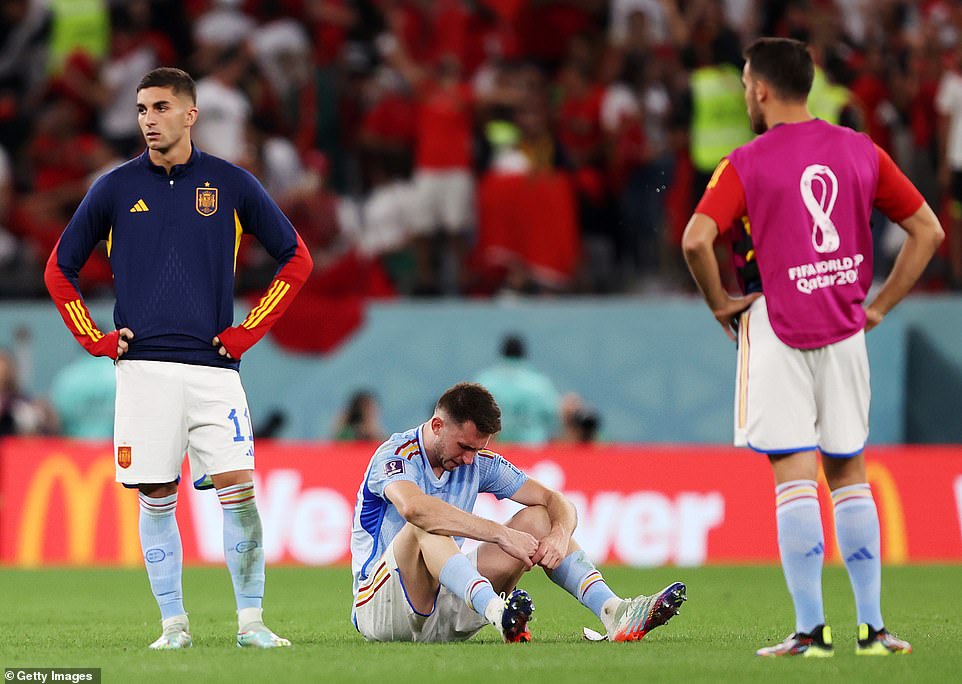 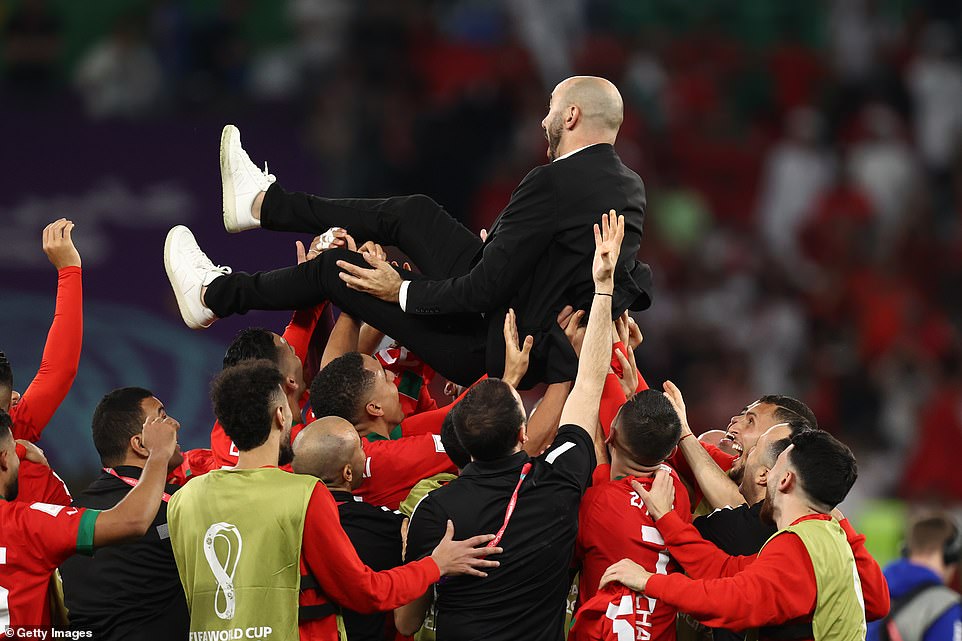 Enrique – who only last week was promising extravagant and brave football – had also said before this game that he hoped his players had practiced ‘thousands of penalties’ before coming to Doha. When it came to it, they only got to take three and they missed them all.

With this stadium crammed full of Moroccans, the shoot-out was always going to be an even greater test of Spanish nerve than usual. And when Pablo Sarabia, Carlos Soler and Sergio Busquets contributed three dismal kicks – the first against the post and the other two saved – it was left to Morocco to complete a totally unexpected journey in to the last eight.

Spanish goalkeeper Unai Simon did save one penalty – Morocco’s third from Badr Benoun – but Abdelhamid Sabiri and Chelsea’s Hakim Ziyech had by then scored their country’s first two and it was left to Achraf Hakimi to complete the victory with a gentle dink down the middle that summed up the control Morocco had on this game all afternoon.

Nobody expected anything of this side when they arrived in Qatar. Walid Regraguis’ team are ranked 22nd in the world. 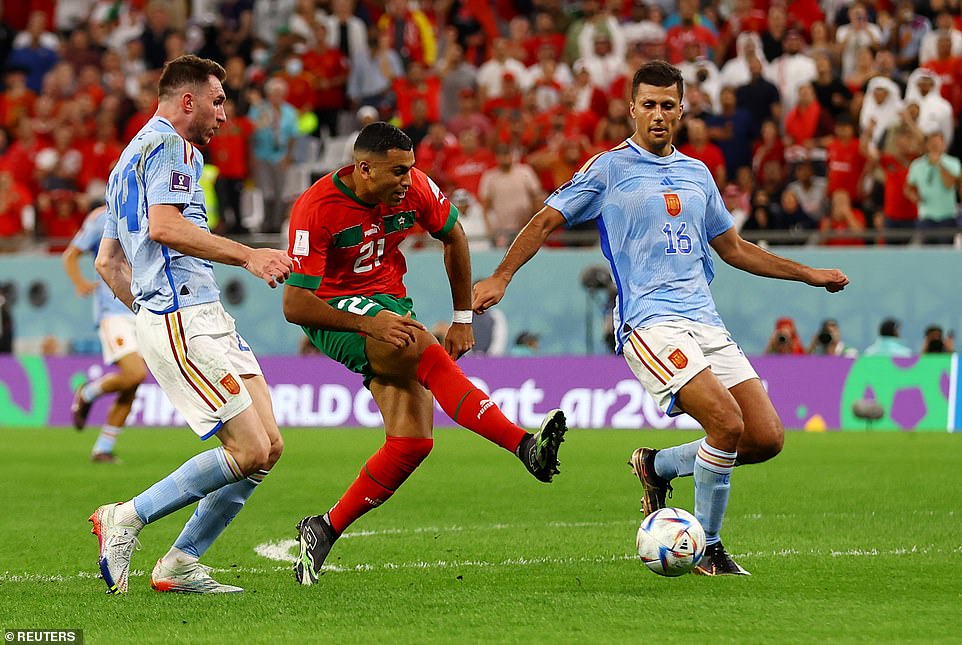 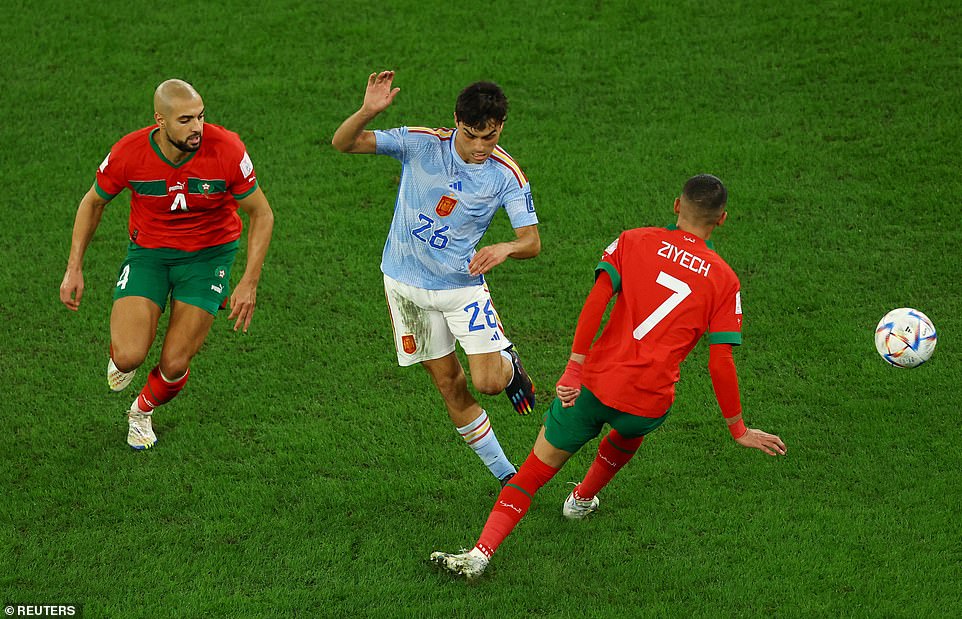 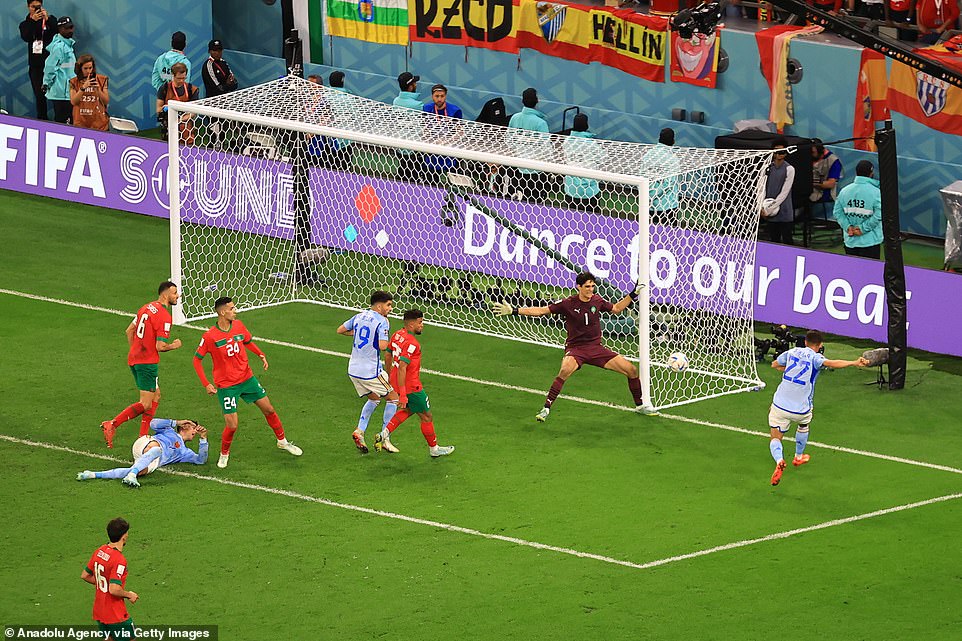 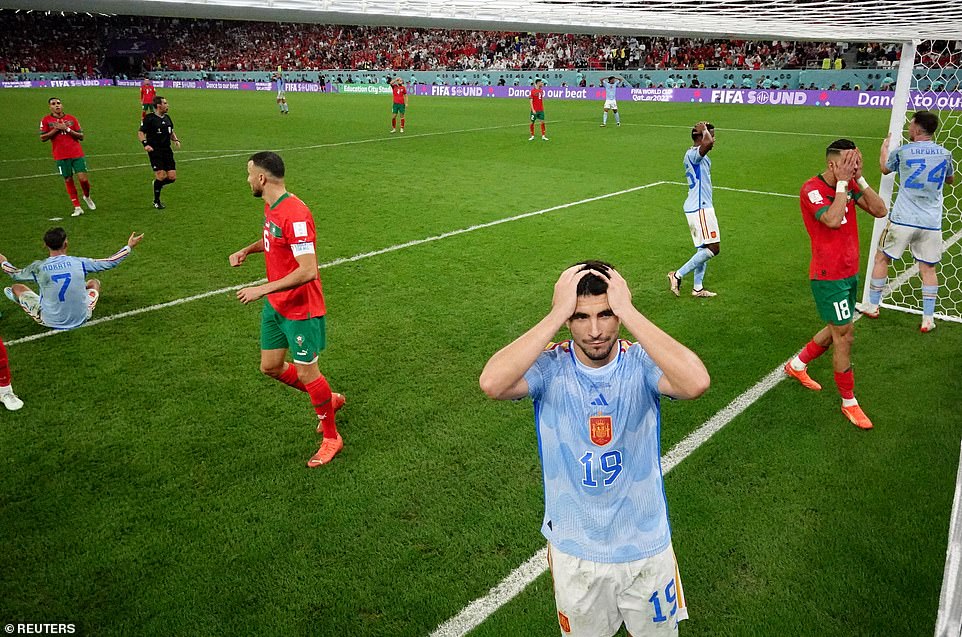 But we sat up and took notice when they beat Belgium in game two of the group stages ten days ago and they are now set on a course for a quarter-final against Portugal or Switzerland and, possibly, a semi-final against England or France.

Nobody will want to play Morocco for sure. They are incredibly organised and industrious. Such was the ferocity of their hounding of Spanish players in possession here, it seemed unfeasible that they could keep it going for 120 minutes. But somehow they did and they now go deep in to this tournament fuelled by an almost manic belief and by some distance the noisiest and most fanatical supporters in Qatar.

Morocco made no attempt to disguise their methods and should not be ashamed. Sitting deep with two lines of four, they were happy for Spain to have the ball and from high up in the stands it was possible to view the moves of the players in red like pieces on a chess board. Whenever Spain moved forwards, the underdog nation dropped in to their familiar and well-coached pattern with just one man tasked each time with moving out to press the player with the ball.

For Spain the challenge was clear. Enrique’s players had to find a way to play through or round their opponents. Spanish sides of old would have managed it. They would have found the angles and seen the spaces, however small. 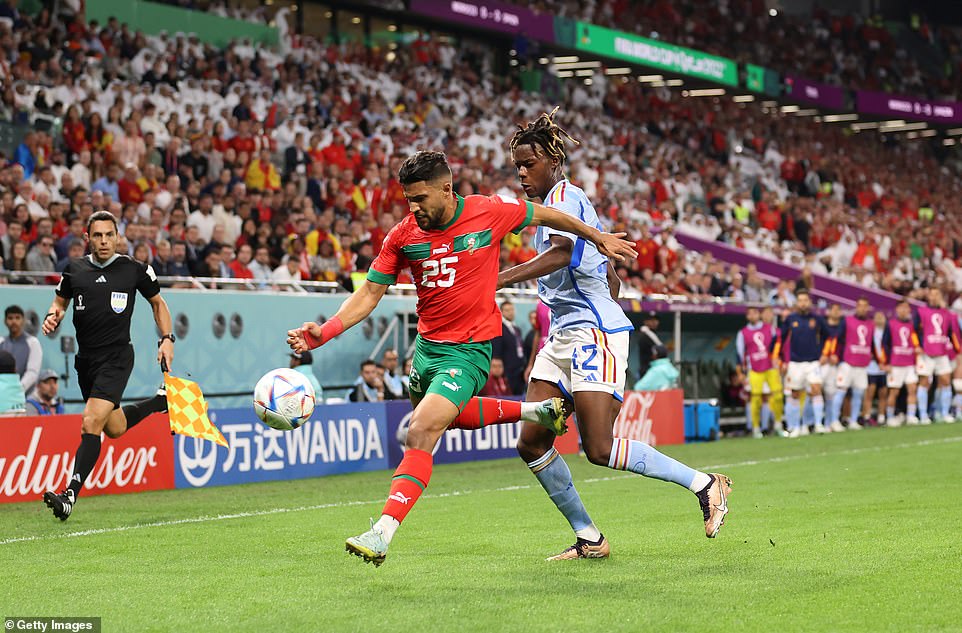 Nico Williams – brother of Inaki – came on and was Spain’s best player, but he was left frustrated as Morocco kept things tight 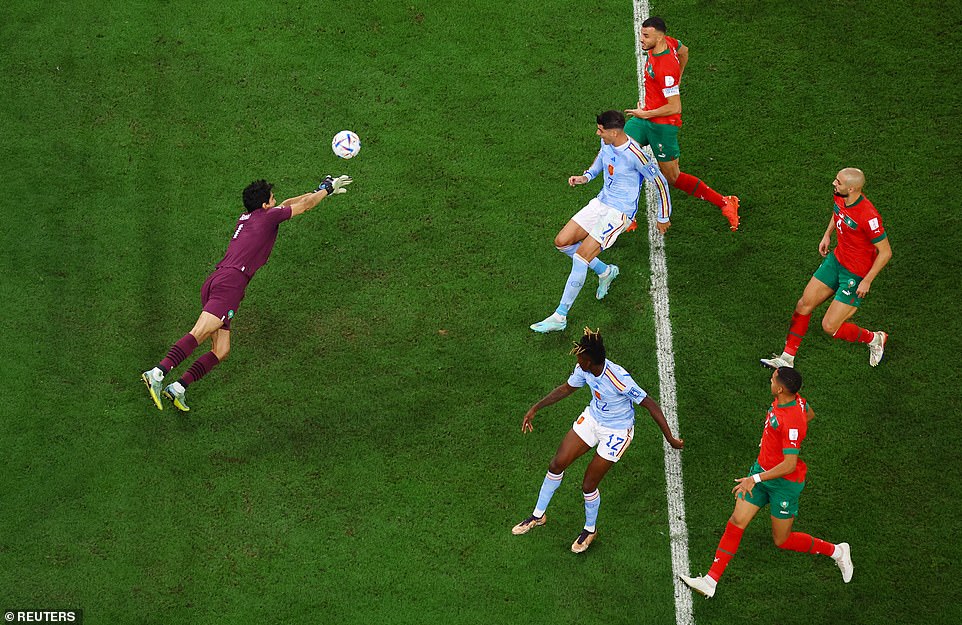 Alvaro Morata was also introduced to give Spain more firepower, but he too was denied by the incredible Bono in goal 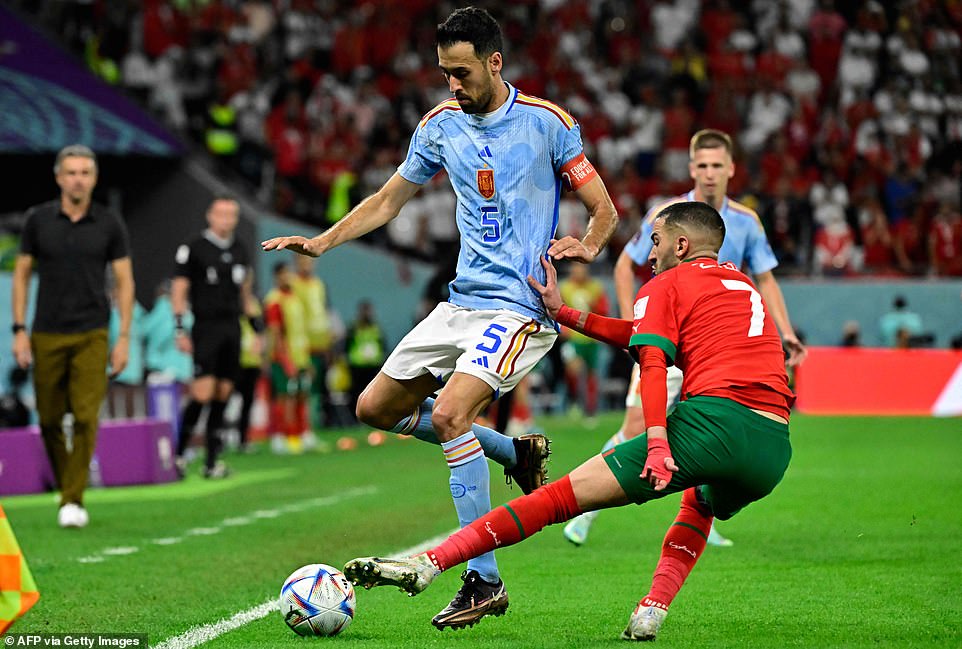 This one proved itself to have no such cleverness even if they did look a little better when Alvaro Morata – strangely excluded after three tournament goals – and Nico Williams came on in the second half. Both players looked to get round the side of the Morrocan defence and occasionally did.

But on the whole it was Morocco who looked more dangerous on the occasions they managed to hustle Spain out of possession and break on them with speed.

The Angers wide man Soufiane Boufal was particularly lively on the left just as Ziyech was down the other side. Indeed the best chance of the first half came when Boufal crossed well in the 40th minute and Nayef Aguerd headed over from seven yards.

Spain pushed hard towards the end of extra time and Sorabia volleyed a late chance across the goal and wide from the far post. By then, though, Morocco’s substitute Walid Cheddira had passed up the chance of the game, wriggling in to the penalty area in the first half of extra-time only to shoot too close to the goalkeeper’s legs. 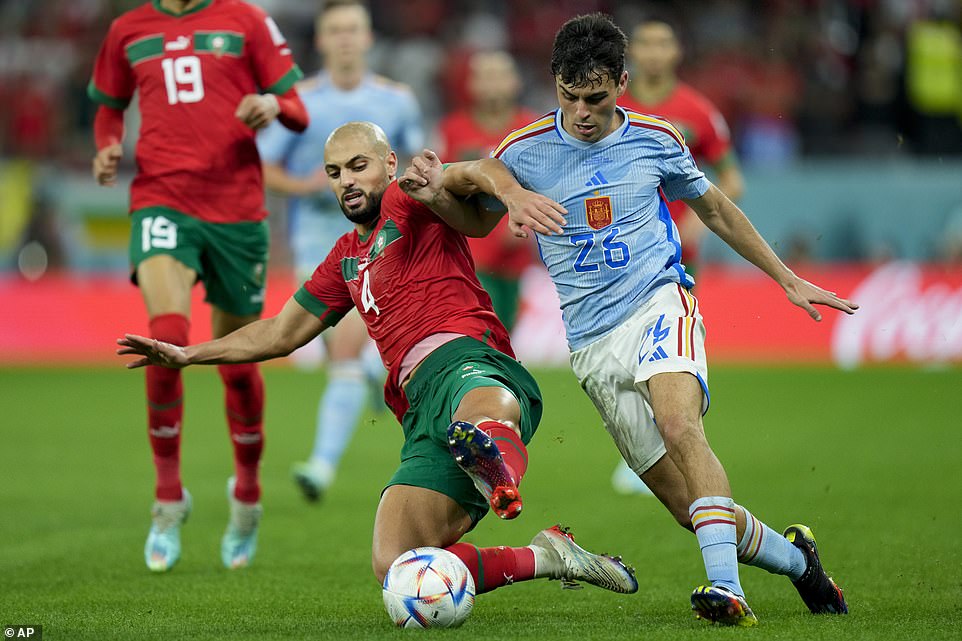 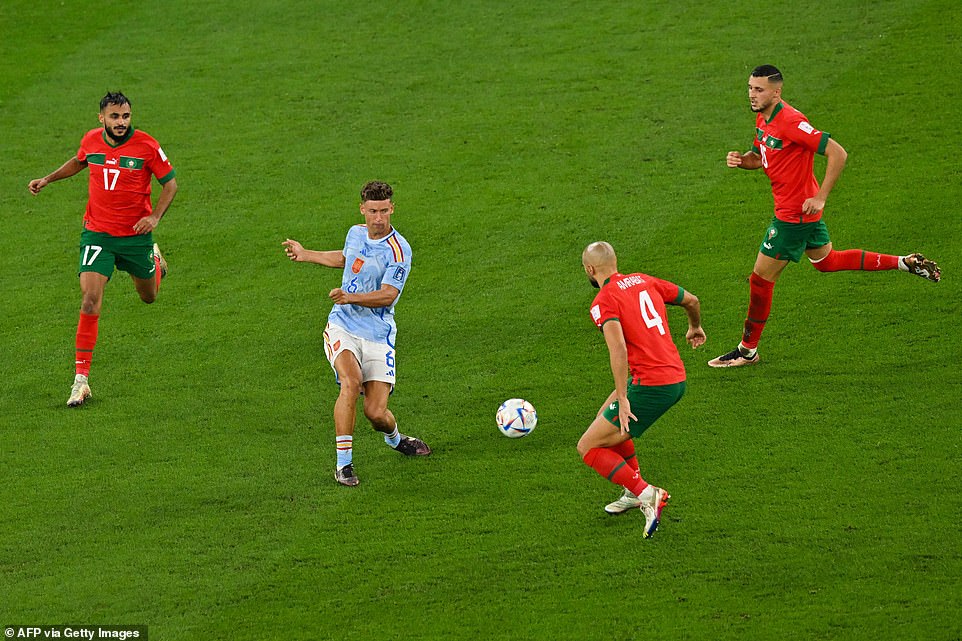 At the end of it all, Spanish anguish was complete and familiar. They exited Euro 2020 on penalties, too.

Afterwards Enrique declared himself to have no regrets and said: ‘We dominated but lacked the goal. That’s the truth.

‘Morocco did a great defensive performance.

‘I am more than happy with my team. They represented my theory and style. I can only praise them.

‘We tried to win. I cannot complain about Morocco. This was a beautiful game for children all over the world.’

It’s hard to dislike Enrique. He has natural charm. But this was a day when the limitations of his team were exposed. A beautiful game for the world’s children? Not for those who happen to live in Spain. 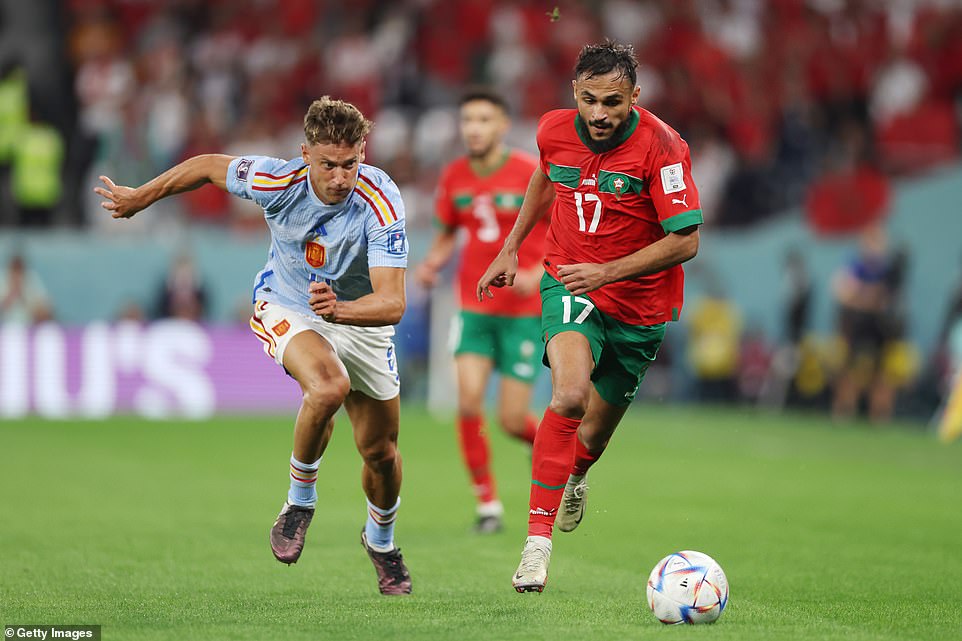 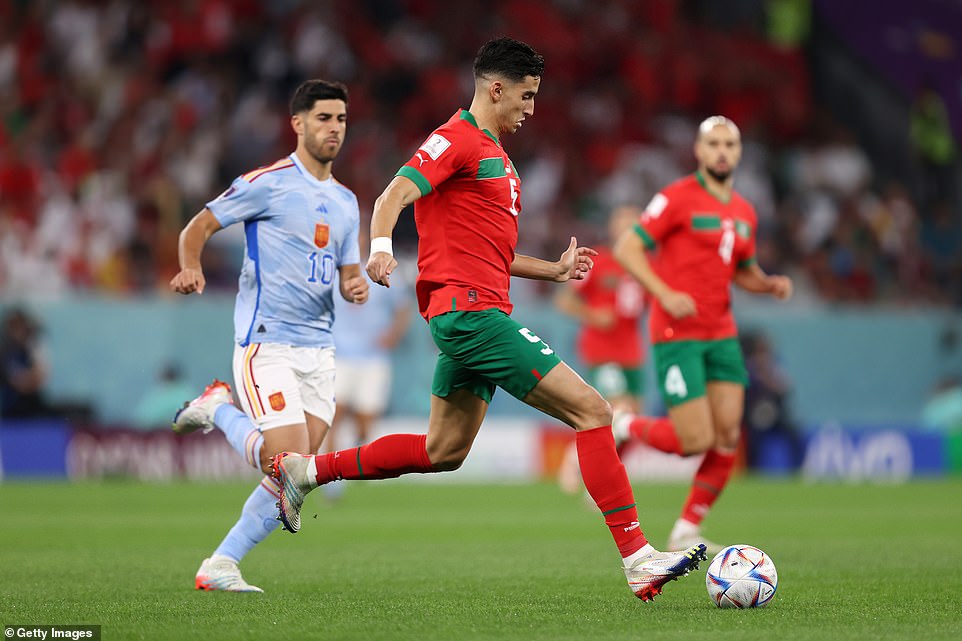 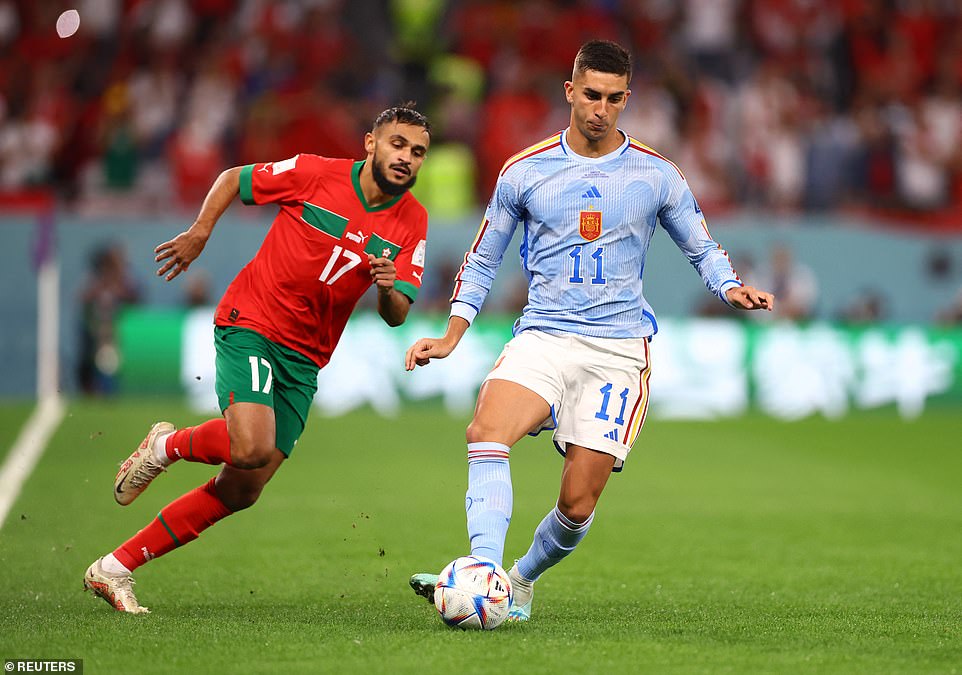 Ferran Torres was gifted a start by Enrique but while he got into promising areas, he couldn’t carve open clear cut chances 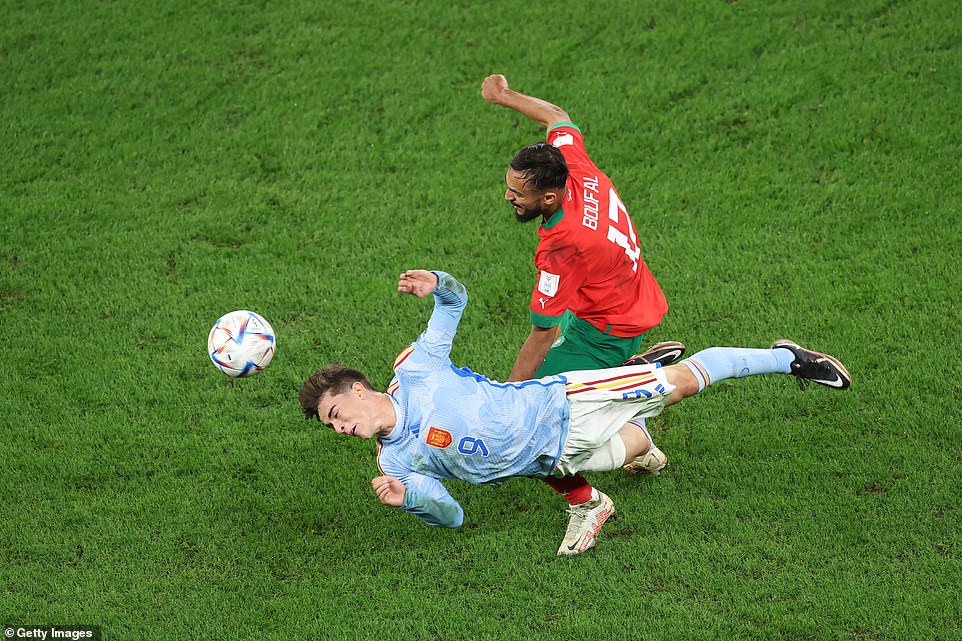 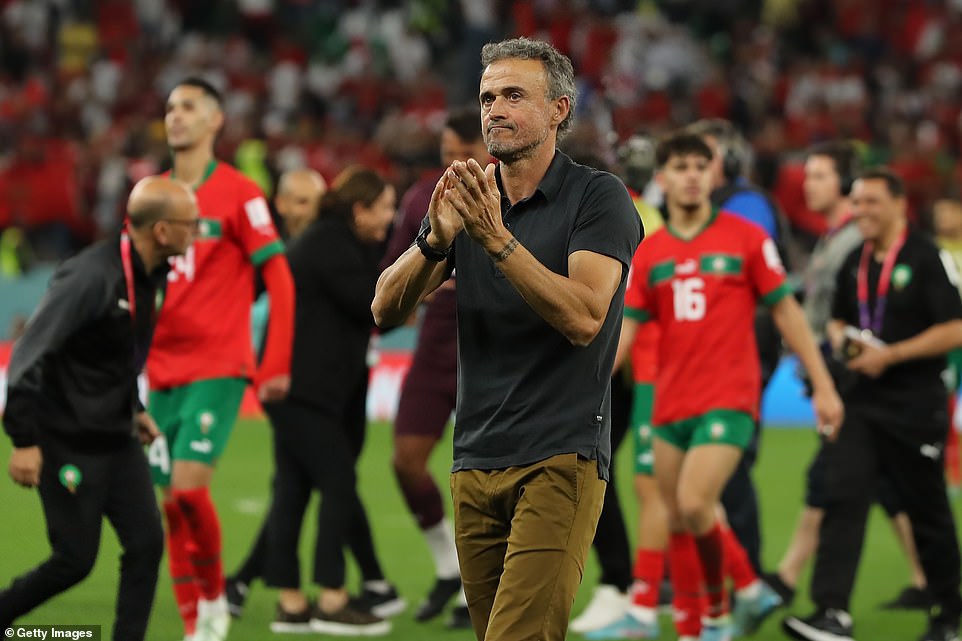