Spain’s daily death toll from coronavirus fell to its lowest for more than two weeks today while the number of new infections also dropped.

It brings the total number of infections from 152,446 to 157,022, the second-highest tally in the world after the United States.

This graph shows the daily death toll in Spain, which fell to 605 today – the lowest since March 24 – after reaching a high of 950 as recently as April 2 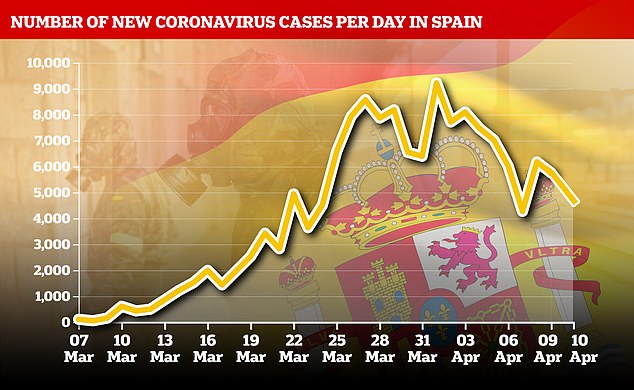 This chart shows the daily number of cases. Today’s figure of 4,576 was the lowest since Monday and a sharp drop from yesterday’s 5,756

Spain reached a peak of 950 deaths on April 2, which was the biggest daily jump that any country had recorded at that point.

However, the figure has fallen on six of the eight days since, dropping to 605 today – the fewest since 514 deaths were recorded on March 24.

At that point, cases were still surging by a regular 15-20 per cent per day, but that rate of growth has also been falling.

Today’s 3.0 per cent increase is the smallest on record, surpassing the previous low of 3.3 per cent which was set on Monday.

Spain’s figures also show that more than 55,000 people have recovered from the respiratory disease.

Of the 4,576 new cases, 906 were in the region around Madrid while 781 were in Catalonia, the two worst-affected parts of Spain. 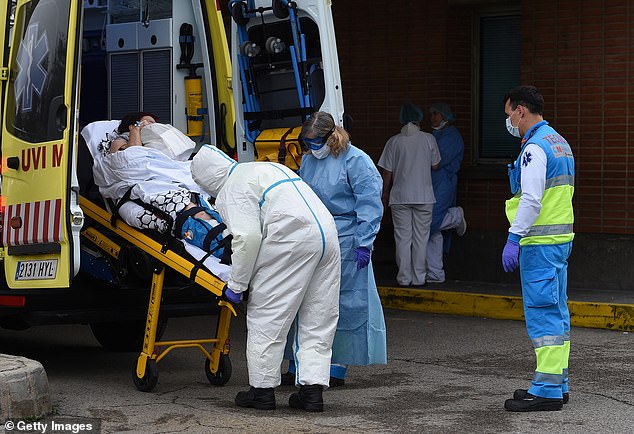 An ambulance worker brings a suspected coronavirus patient to Severo Ochoa Hospital in Madrid yesterday, in the region which has been hardest hit by the epidemic in Spain 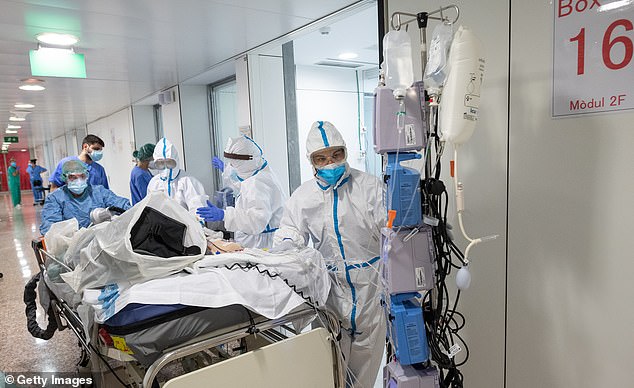 Meanwhile, the Canary Islands and Balearic Islands have reported more than 1,500 cases between them, with just below 100 deaths each.

Health chiefs believe the pandemic has peaked, but have urged the population to keep observing lockdown rules which have been in force since March 14.

The restrictions are currently due to expire on April 25, but the government is expected to announce another two-week extension.

The lifting of lockdown measures would be gradual and dependent on health data, Sanchez said. 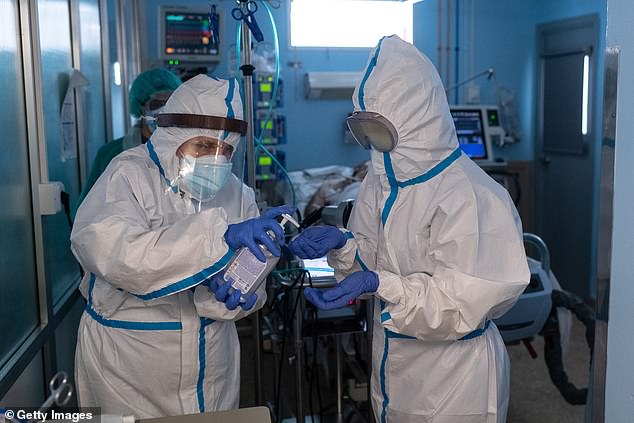 The PM is proposing a ‘great pact for the economic and social reconstruction of Spain’ once the standstill is over.

But he warned of a dire aftermath for an economy which the main business lobby thinks could slump up to nine per cent this year.

‘The immediate economic horizon that we have is dark and we will have to act with all of our available resources,’ Sanchez said.

The government’s proposal is inspired by the 1977 ‘Pacts of Moncloa’ which reformed the economy after the end of the Franco dictatorship.

Opposition People’s Party leader Pablo Casado played down talk of a pact, but said he supported extending the lockdown.

The confinement measures have led to the cancellation of all Easter processions in a Catholic country of nearly 47million people.

Police said yesterday that nine people had been arrested after filming themselves on a fake procession at Merida in the southwest.