A top Spanish bureaucrat compared British sovereignty over Gibraltar to the Soviet Union’s control of East Germany during angry exchanges over Brexit, it was reported this morning.

Pablo Garcia-Berdoy ‘shouted’ at his German counterpart as permanent representative to the EU, Michael Clauss, as Mr Clauss urged Madrid not to derail Brexit over Gibraltar.

Last night tensions over The Rock rose as Spain’s Prime Minister vowed to ‘veto’ Brexit unless the UK made concessions before a summit of Eu leaders on Sunday.

Mr Garcia-Berdoy’s disagreement came on Tuesday as officials worked behind the scenes to secure an agreement that would provide the framework for Sunday’s meeting.

One diplomat present told The Times the Spaniard told his German colleague: ‘We supported the unification of Germany. Where is the solidarity now?’

The dispute came beforeSpain’s Prime Minister last night warned he would ‘veto Brexit’ unless the withdrawal deal was changed to offer new guarantees on Gibraltar.

The Rock has become a last-minute sticking point in Brexit talks as Madrid warned a future UK-EU trade deal could not apply in Gibraltar without a Spanish say.

Pedro Sanchez, who has spoken to Theresa May in a bid to make a breakthrough ahead of Sunday’s EU summit, said tonight: ‘Our positions remain far away.

‘My Government will always defend the interests of Spain. If there are no changes, we will veto Brexit.’

Luis Marco Aguiriano, Spanish minister for the EU, earlier accused Theresa May and the EU of ‘acting under the cover of darkness’ over Gibraltar.

Britain’s PM has vowed to deliver a deal for the ‘whole UK family’ including Gibraltar and other overseas territories.

Spain cannot outright veto the Brexit deal at Sunday’s summit to sign off the divorce but Brussels will be desperate to get unanimous agreement from EU leaders.

Mr Aguiriano said an article in the draft Brexit text had been added ‘under the cover of darkness and with treachery’ behind Spain’s back.

Madrid has vented its anger at article 184 of the draft deal, which says the EU and the UK will seek to ‘negotiate rapidly the agreements governing their future relationship’ between the official day of withdrawal on 29 March 2019 and the end of a transition period in December 2020.’

EU sources have made clear irritation at Spain’s decision to try and reopen the issue of Gibraltar at the 11th hour of the talks.

Brussels spokesman Margaritis Schinas confirmed today ‘work is continuing’ to resolve differences over Gibraltar, the tiny territory at the tip of the Iberian Peninsula that was ceded to Britain in 1713 but is still claimed by Spain.

‘There are ideas, contacts are ongoing,’ Schinas said, without providing further details.

Mr Sanchez had said on Tuesday that his government ‘cannot accept’ Gibraltar’s future being determined by negotiations at the EU level. 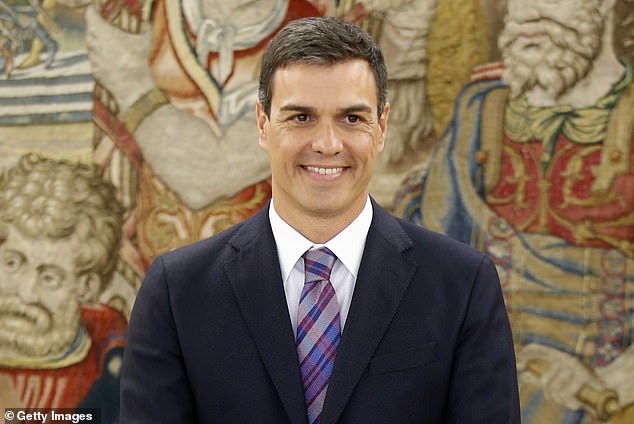 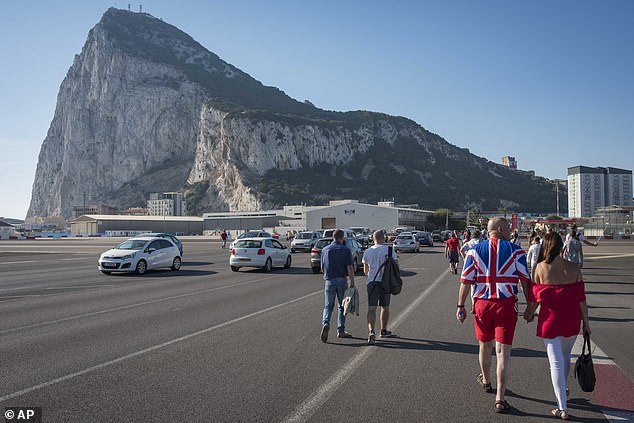 Madrid made clear today it remained deeply unhappy with the future status of the Rock (file), insisting any future UK-EU trade must not apply there without a Spanish say.

Following the call between Mr Sanchez and Mrs May on Wedneday night, a Downing Street spokesman said: ‘(Mrs May) said there had been good engagement between the UK, the Government of Spain and the Government of Gibraltar in order to come to an agreement in the Withdrawal Agreement and associated package of Memoranda of Understanding relating to Gibraltar.

‘She said that the UK and Government of Gibraltar looked forward to these discussions continuing as we discuss the future relationship.

‘The Prime Minister reiterated her commitment to agreeing a deal that works for the whole UK family including Gibraltar, the other UK Overseas Territories and the Crown Dependencies.’

Best for Britain champion and former Lib Dem leader Tim Farron MP said: ‘This spat over Gibraltar could potentially sink Theresa May’s bad Brexit deal once and for all.

‘The people of Gibraltar must not be used as pawns in a political game between Whitehall and Brussels.

‘The political declaration released today did not mention Gibraltar once. It seems to me that this declaration is all about unicorns and the never never rather than about facts. With issues with Scottish Tories and the DUP on one side and the Spanish government on the other the government looks like it is stuck between a rock and a hard plaice.

‘I worry that in this messy divorce we might be leaving one of the children behind.’