Spain’s latest coronavirus figures have dropped by a quarter in a promising sign that the country will be able to ease out of lockdown.

Data released by the Ministry of Health this morning revealed that there were now 223,578 positive cases of Covid-19 – an increase of just 721 on Friday compared to 1,410 the day before.

The figures are the lowest increases for a week, but have also reduced to levels similar to the start of the outbreak in March.

They appear to indicate that the Spanish Government’s exit strategy is working as more than half of the country prepares to enter phase one on Monday.

Spain’s latest figures for coronavirus have plummeted as the Government looks to move more than half of the country into phase one of lifting the lockdown on Monday. Pictured: Walkers and cyclists were out in force in Barcelona today

Those that haven’t ‘passed the test’ will be reassessed next week.

Phase one, following on from phase zero introduced on May 4th, will allow the reopening of the terraces of bars and restaurants, but only 50 per cent.

Hotels will also be allowed to open, provided that common areas are sealed off. They have all been closed since at least March 14th when Spain imposed its State of Emergency.

Churches can also partially open, as well as museums to a third capacity, outdoor markets and some cultural events. 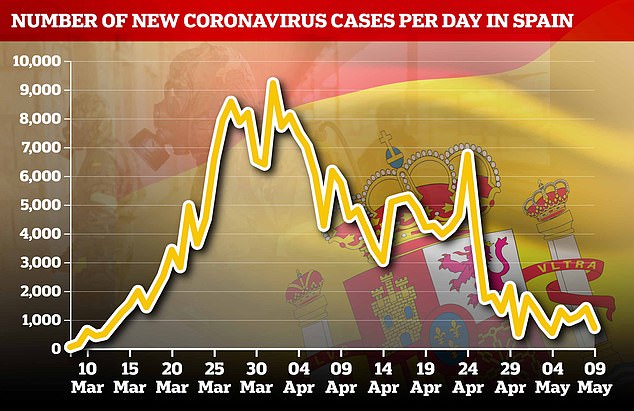 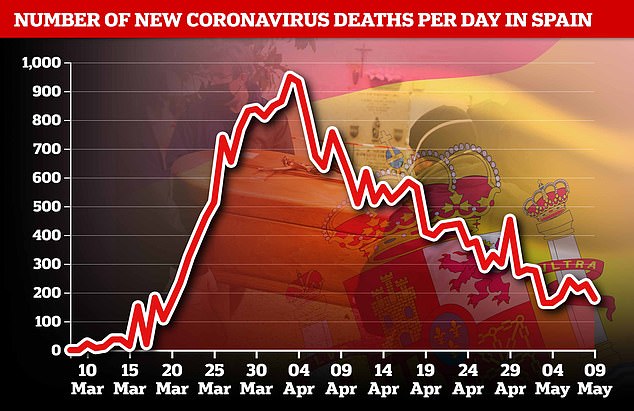 Social gatherings of family and friends up to ten people will also be allowed and some cultural events can go-ahead. All will be governed by social distancing and strict health regulations.

There will be four stage in all, finishing towards the end of June when Prime Minister Pedro Sanchez says the start of the ‘new norm’ will have been reached.

Those regions which aren’t yet ready to enter phase one include Madrid which is the region most hit by coronavirus deaths. The Spanish Government says it has yet to meet all the criteria in a decision which has angered the capital and led to at least one political resignation.

Pubs, restaurants and hotels on the Costa del Sol are fuming after the Spanish government also them permission to re-open on Monday. 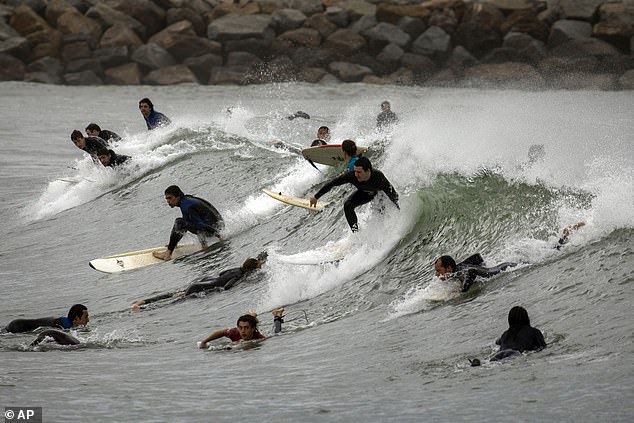 Beaches were filled were surfers and sunbathers ahead of an official easing of lockdown. The regions of Malaga and Granada are the only places in Andalusia which cannot move forward from phase zero to phase one on May 11th under the coronavirus exit strategy

The regions of Malaga and Granada are the only places in Andalusia which cannot move forward from phase zero to phase one on May 11th under the coronavirus exit strategy.

The Ministry of Health said they were ‘not ready’ due to the incidence of coronavirus but has promised they can ‘move forward’ in the next ten days or so.

But hotspots in Malaga, which include Marbella, are livid that other holiday destination such as Tenerife, Lanzarote, Gran Canaria – in fact, all of the Canaries – as well as Ibiza, Mallorca and Menorca got the go-ahead yesterday to enter phase one.

Some of the businesses on the Costa del Sol had previously indicated that they might not open anyway because it wasn’t viable due to the lack of tourists and the space restrictions. 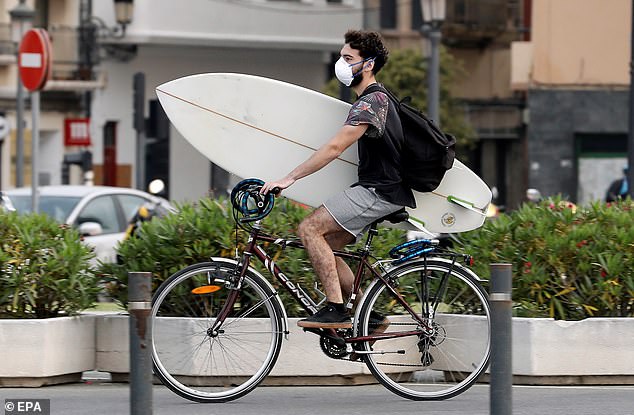 Social gatherings of family and friends up to ten people will also be allowed and some cultural events can go-ahead. All will be governed by social distancing and strict health regulations

Later, however, they changed their minds when the Spanish government changed the rules to allow a 50 per cent occupation of terraces rather than the original 30 per cent. The interiors will only be allowed to open at a later stage, probably at the start of June but then also with space restrictions.

Head of the emergency committee, Fernando Simon has indicated that Malaga and Granada are ‘nearly there’ and he will be reviewing the situation following meetings next week.

President of the Malaga hoteliers’ association, Javier Frutos said it was ‘bad news’ as they had already made the arrangements to open, with staff etc, and might now have to wait another week at least.

Andalusia’s president, Juanma Moreno said he will request a review whilst vice president, Juan Marín, said it was an ‘attack’ on the region to exclude the two provinces. He described it as an ‘arbitrary’ decision.

‘It is difficult to understand,’ said Juanma Moreno. ‘The map of Andalusia should be painted in the colour of phase one. I will ask that this decision be reviewed and the same criteria be applied to us as to the others.’

Malaga’s leader, Francisco Salado, who is also the head of tourism on the Costa del Sol, said: ‘We cannot hide our disappointment. It’s difficult to understand that more rural areas with better data are still in phase zero, as is the case in most of the municipalities of the Malaga province.’

‘We have to keep improving the contagion statistics. We knew that this process was going to be long and complicated, we must be patient and responsible, although we have all been disappointed.’

Marbella’s Mayor, Angeles Munoz said she was very surprised about the decision and said it created a negative image of Costa del Sol’s reputation when it was singled out against other tourist destinations. She said the whole of Andalusia should have been treated the same.

Around half of Spain’s population is able to move into phase one of the government’s staged winding down of Covid-19 restrictions.