Spain’s Aymeric Laporte admits he does not follow other World Cup games, or know possible opponents

‘I’m not a football addict. I don’t like watching matches’: Spain’s Aymeric Laporte does not follow other World Cup games… and the Man City defender even admitted he does not know when club games kick-off!

Aymeric Laporte has revealed he doesn’t like watching football matches – and does not even know what time his club games kick-off.

The Man City star is part of Spain’s World Cup bid, playing both their 7-0 thrashing of Costa Rica and their 1-1 draw with Germany.

However, the Spanish side have a World Cup predictions league in their base, which sees the 28-year-old central defender down at the bottom – or at least, the anonymous person making his match calls.

Aymeric Laporte said he does not watch football, despite starring for Spain at the World Cup

When colleagues gather in the TV room to tune in to other matches in the tournament, Laporte is absent. He loves playing, but he is not a fan of the paraphernalia around the game.

Laporte told The Guardian: ‘I’m not doing it myself. Someone’s doing it for me. I’m not a football addict. Honestly, I don’t like watching matches.

‘I’ve always played football because I’ve always loved it; it’s my passion. But what matters on the pitch isn’t always reflected away from football. And that could annoy me. 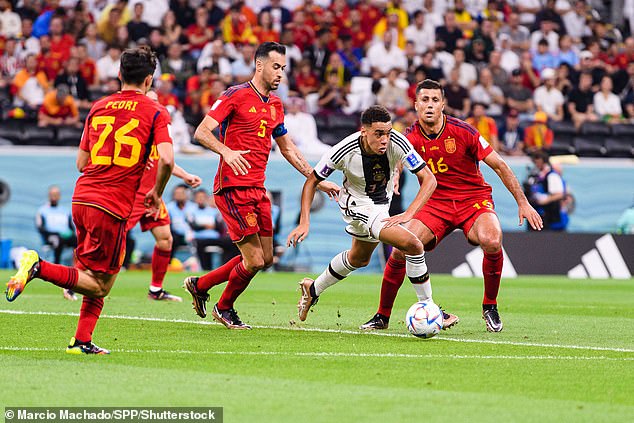 ‘It doesn’t reach the point where it annoys me because I don’t even look, I don’t read. The less I watch the better.’

Team delegate Fernando Giner leads Spain’s prediction league, while the Man City defender has not even looked to see who they could face in the knockout rounds.

‘I haven’t even looked,’ the 28-year-old grinned. ‘I haven’t looked, haven’t done the predictions, haven’t done anything. We didn’t come here to speculate, we came to win.’

This lack of concern about upcoming games is not just an international thing, but one at club level too. 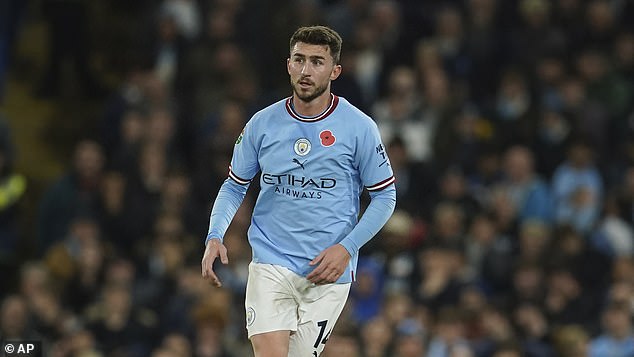 ‘Honestly, when I play for City, I don’t even know what time kick-off is. My family call and say: hey, what time tomorrow? ‘I don’t know.’’

With their unbeaten start to the campaign, Spain have been one of the better sides in Qatar, and Laporte agrees, suggesting the performances show the reasons why his country will emerge victorious later this month. 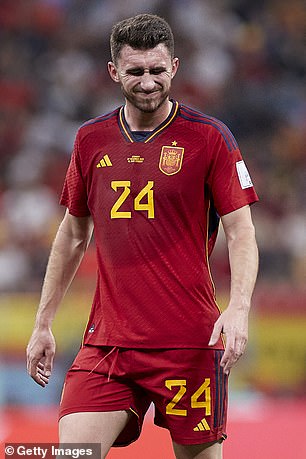 Laporte was ‘frustrated’ with Germany draw

He said: ‘Our play is an example for lots of national teams. We play very well, we have spectacular footballers, we move the ball.

Against Germany, one of the best teams in the world, we showed we can play. The ability to manage the ball, to dominate possession, to find passing lines. Frankly, I think we have been very good.’

However, he admitted the squad were ‘frustrated’ by dropping two points when they did not see out their 1-0 lead over Germany.

Laporte added: ‘We lost a stupid ball, there’s a rebound, they get it, and … football is small details and letting in that goal was a small detail. Small things decide games, here, there or anywhere.’

Spain face Japan on Thursday night, and Laporte’s side will be hoping to secure their place in the round of 16, which will take place on either Monday or Tuesday of next week.

Manchester City’s competitive return comes when they face Liverpool in the League Cup on December 22, four days after the World Cup final. It’s an 8pm kick-off at the Etihad, Aymeric.