Spain’s coronavirus outbreak is ‘slowing down’, the World Health Organisation says, despite an uptick in the daily death toll and rate of new infections today.

Dr Bruce Aylward, an adviser to the WHO director-general, said after visiting Spain that it was too early to be optimistic but the crisis was ‘definitely slowing down’.

Today’s growth in new cases was 4.4 per cent, which would have been a record low two days ago but now marks the second consecutive increase.

Still, the average daily increase of 6,365 cases in the last seven days is lower than the average 7,789 of the previous week.

The total of 146,690 cases is the second-highest in the world, ahead of Italy but behind the United States which has nearly 400,000.

The latest 6,180 cases included 1,981 in the Madrid region and 1,324 in Catalonia, the two parts of the country which have been hardest hit by the crisis.

The Madrid region alone has more than 42,000 cases, around 29 per cent of the Spanish total.

Spain’s daily death toll hit a peak of 950 on April 2, but after four straight days of decline it has now increased for a second day running.

Yesterday’s rise to 743 deaths was played down as an ‘oscillation’ by Maria Jose Sierra, the deputy chief of health emergencies.

‘What matters is to see the trend and the cumulative data,’ she said, suggesting that Tuesday’s figures included some delayed additions from the weekend. 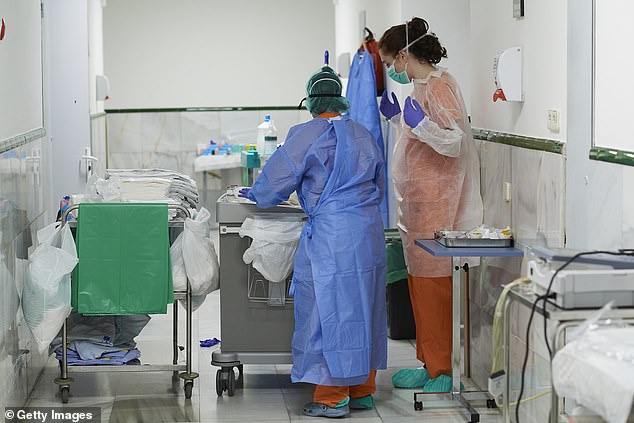 Health personnel wearing gloves, masks and protective suits work at a hospital in Madrid, in the region which has been hardest hit by the crisis 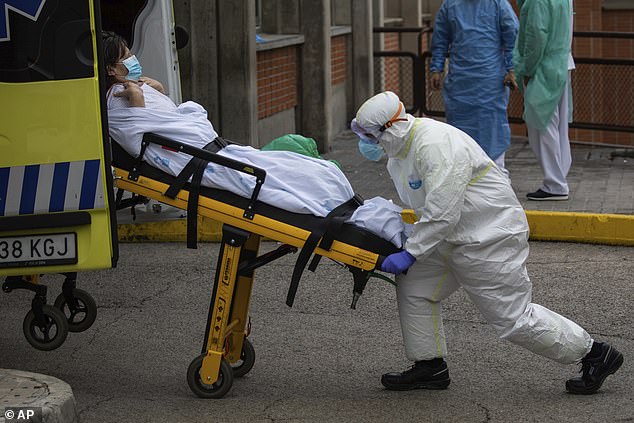 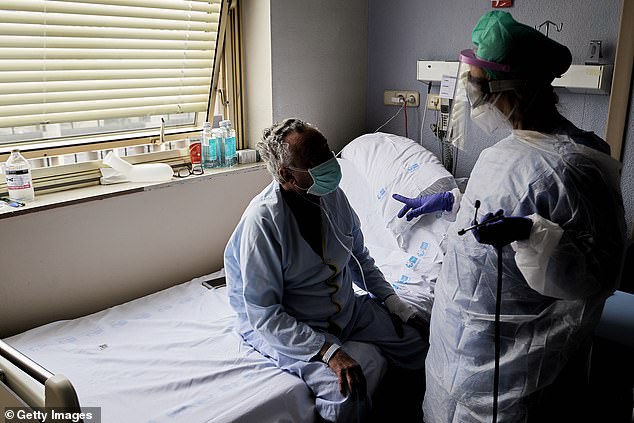 Spain has been in lockdown since March 14, and prime minister Pedro Sanchez said at the weekend that the measures would last until April 26.

Like many countries, Spain has its eye on antibody tests as a way of ending the lockdown by allowing people with immunity to return to work.

For restrictions to be lifted, officials say testing has to be widened to find carriers who may have mild or no symptoms.

Health minister Salvador Illa said 60,000 randomly chosen people would be tested over three weeks to gauge the spread of the virus.

Asked about reports that many coronavirus deaths were going unregistered, budget minister Maria Jesus Montero said there could be delays between the report of a death and its attribution to the virus.

Thirteen of Spain’s 17 regions have registered more deaths than usual at this time of year. In 11 of those, the excess deaths are not fully explained by coronavirus.

In the central region of Castilla La Mancha, around 2,000 more people than usual died between March 15 and April 3, but fewer than 1,000 coronavirus deaths were registered during those three weeks.

Health minister Illa said that Spain’s accounting for the impact of the pandemic was among the most stringent in Europe.

‘Everyone who tests positive for the coronavirus and dies is a person counted as having died from coronavirus,’ he said.

He added that he had spoken to the official in charge of health in Castilla La Mancha, and concluded that the data was based on that definition and therefore correct.

Spain’s mortality rate of 9.9 per cent means that around one in ten people confirmed to have Covid-19 have died of the disease.