The royal, 46, was seen stroking children and holding their hands as she spoke to packed crowds in the health centre in the country’s capital Maputo.

The Queen of Spain is currently in the region for a two-day visit to meet with those impacted by recent natural disasters in the country.

Queen Letizia looked broody as she gazed at toddlers and babies during her visit to the health centre in Maputo, Mozambique 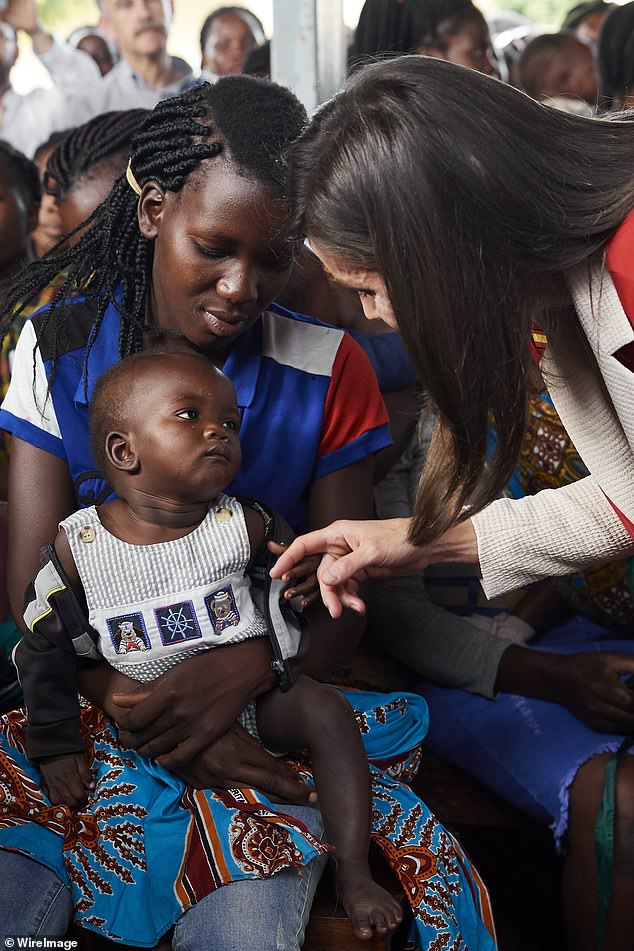 Queen Letizia gently reached out to one little boy, and seemed charmed by the children at the health centre 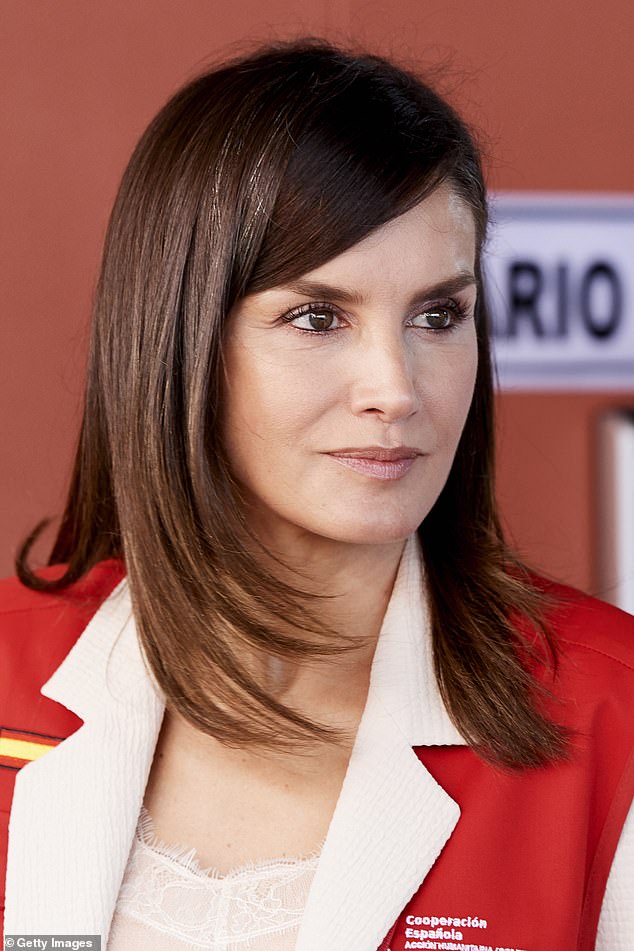 Letizia wore a light lace top beneath her cream suit, and finished the outfit with a red Spanish Cooperation waistcoat

Much of the area is still recovering from horrendous flooding and devastation left after Cyclone Idai struck in March.

The Spanish royal was due to visit the region ahead of Cyclone Kenneth’s arrival.

She plans to meet with officials to see the work being done to strengthen relations between Mozambique and Spain.

The royal is undertaking the two day visit despite the devastating Cyclone Kenneth impacting more northernly parts of Mozambique. 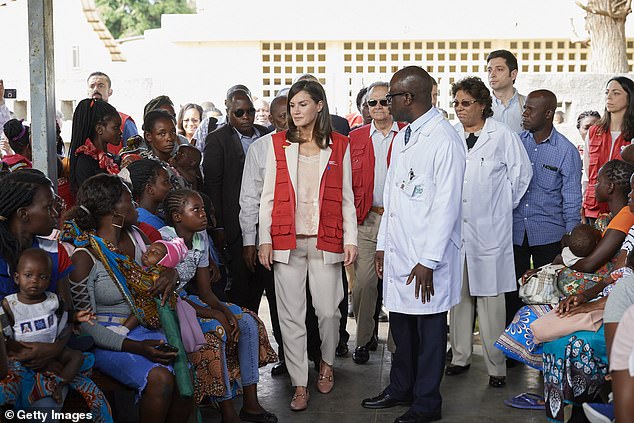 She met with crowds of women and children at the Manica Health Center in Mozambique’s capital, Maputo 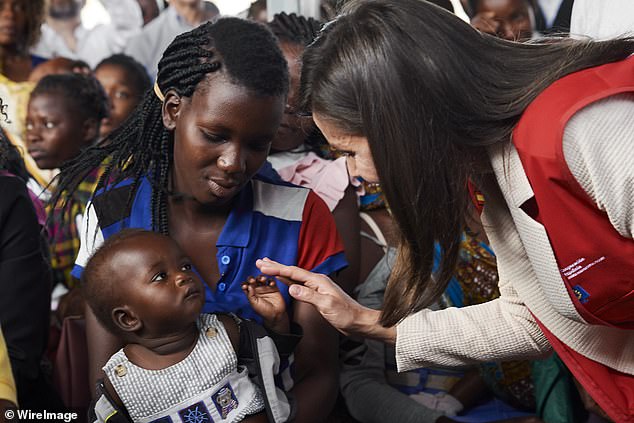 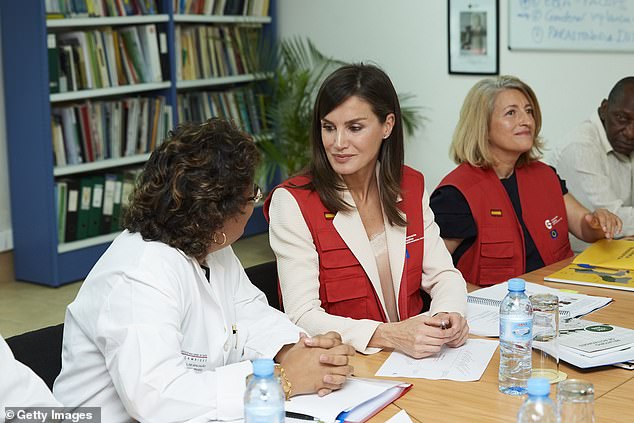 Inside, she met with health care professionals to learn about work carried out by Spanish Cooperation in Mozambique in the areas of democratic governance, health, nutrition and rural development

On the first visit of her royal tour, she met with crowds of women and children at Manica Health Center in Maputo, the country’s capital, which is on the south coast of the country.

She wore a cream textured suit, with a light lace-trimmed camisole beneath her open jacket, and finished the outfit with nude brogue style shoes.

The outfit was paired with a bold red ‘Spanish Cooperation’ waistcoat, which several member’s of the royal team were pictured wearing.

The mother-of-two was seen crouching down to meet women and children, and seemed charmed by the group. 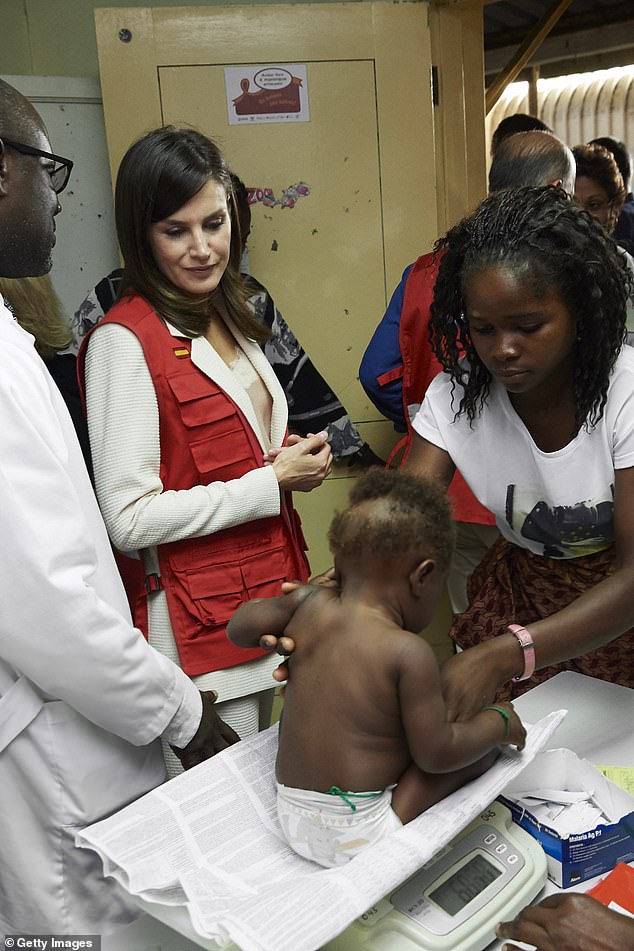 The royal watched on as one little boy was weighed at the health center in Maputo, Mozambique 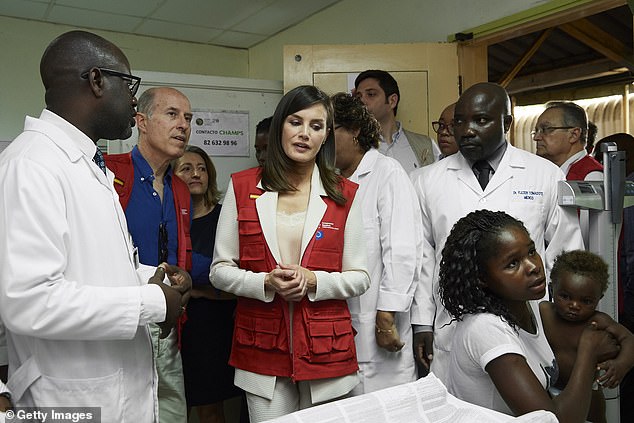 Her two day royal visit started with a tour of a health centre, where she spoke to mother’s and their children, as well as health care professionals 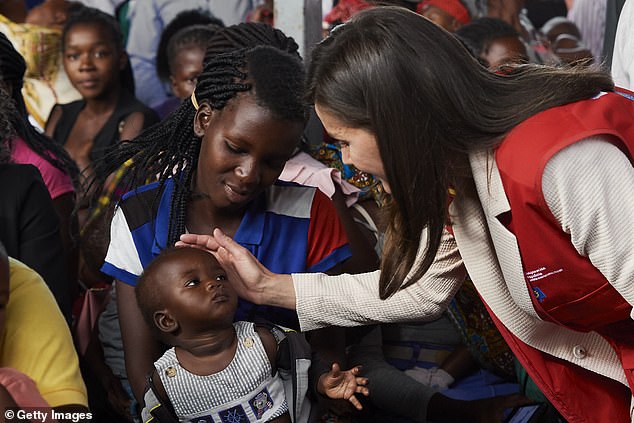 The royal looked charmed by the children impacted by natural diasters in the region, stroking one little boy’s head

Mozambique has been struck with several terrible cyclones in the last few months, including Cyclone Idai which caused hundreds of deaths in the region earlier this year.

It’s currently battling against Cyclone Kenneth, which is causing devastating floods in the country, putting 700,000 people’s lives at risk. 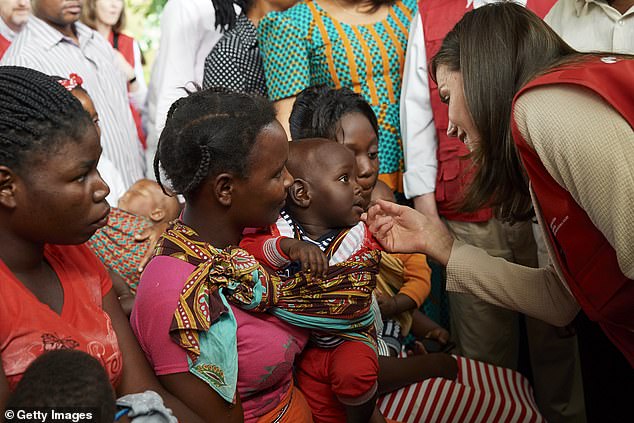 Queen Letizia looked to have charmed one little boy, who couldn’t help but stare at the royal as she stroked his cheek 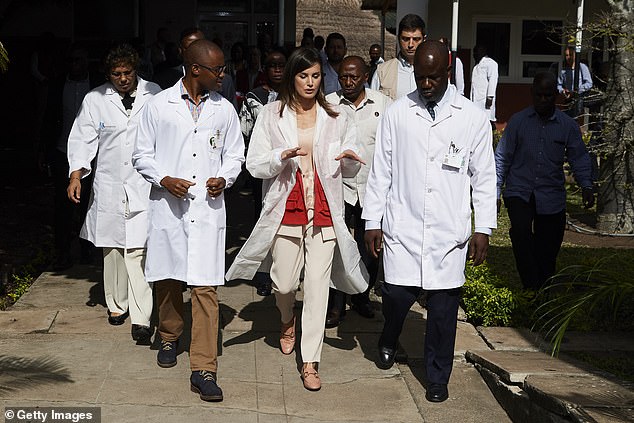 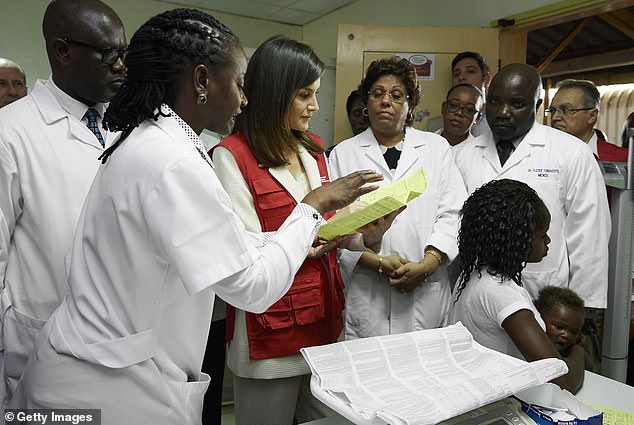 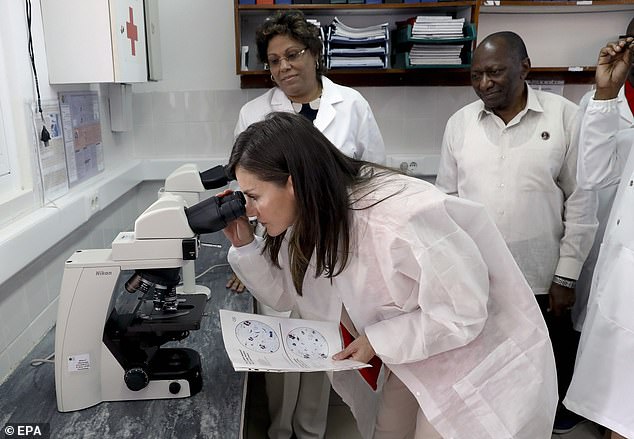 While on the visit to the medical center, she looked sombre as she peered through a microscope 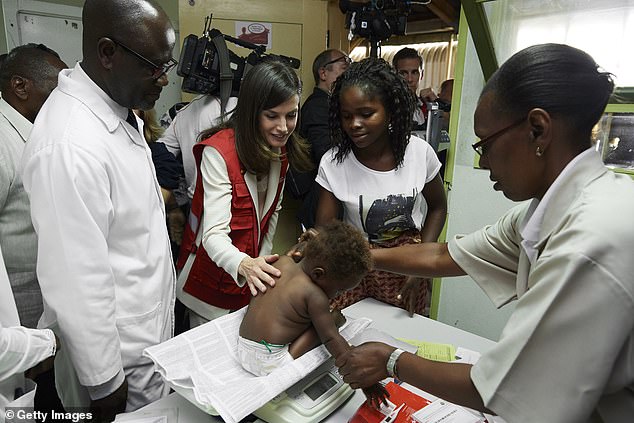 Inside the medical centre, Letizia looked somber as she met with children being currently treated as well as health care professionals.

She donned a white lab coat as she met with medical experts, and was seen peering through a microscope.

During her visit, Letizia will learn about work carried out by Spanish Cooperation in Mozambique in the areas of democratic governance, health, nutrition and rural development. 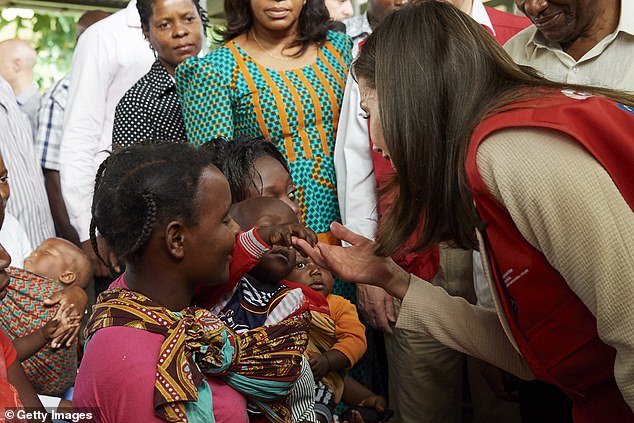 Both parents and children were charmed by the royal, who was greeted by crowds at the health centre 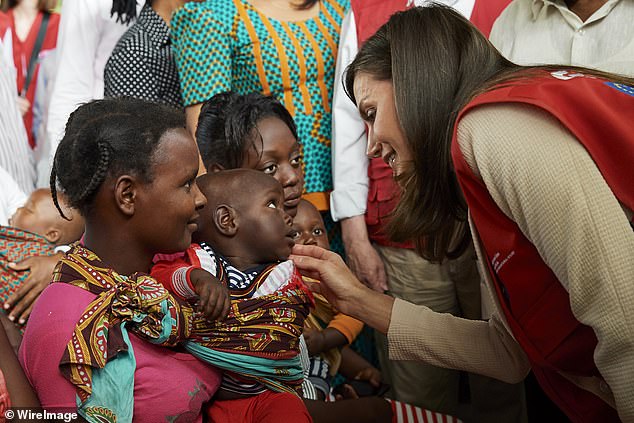 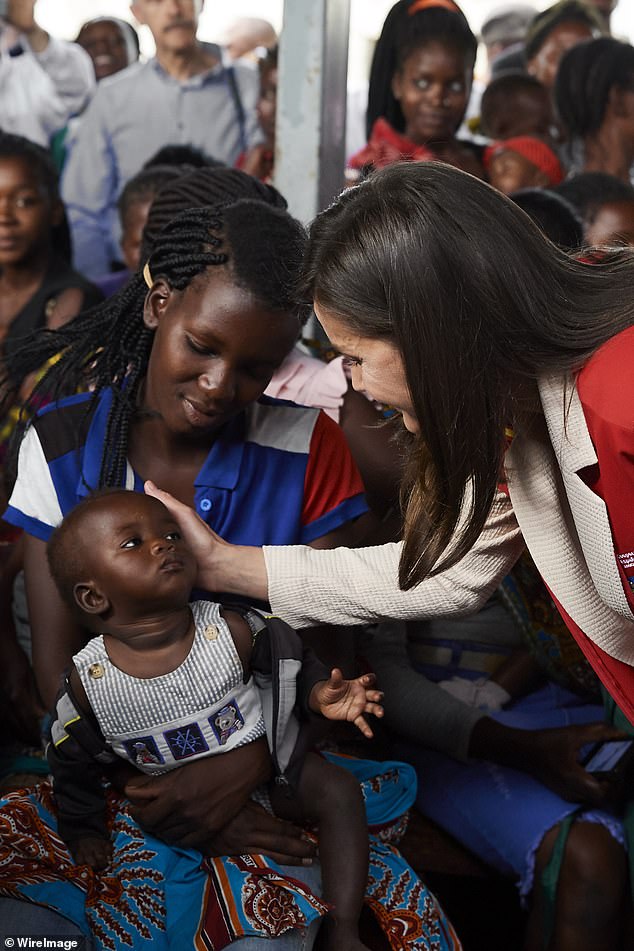 It was the Queen’s fourth cooperation visit, with her other trips taking her to Senegal, the Dominican Republic and Haiti

She will also learn about the emergency response for those affected by Cyclone Idai, which struck earlier this year in March.

Authorities have said at least five people died after Kenneth roared in Thursday evening with the force of a Category 4 hurricane, stunning residents of a region where such a storm had not been recorded in the modern era.

More than 160,000 people have been affected in the largely rural region, many already exposed and hungry.

More than 35,000 homes in parts of Mozambique’s northernmost Cabo Delgado were partially or fully destroyed by the storm. 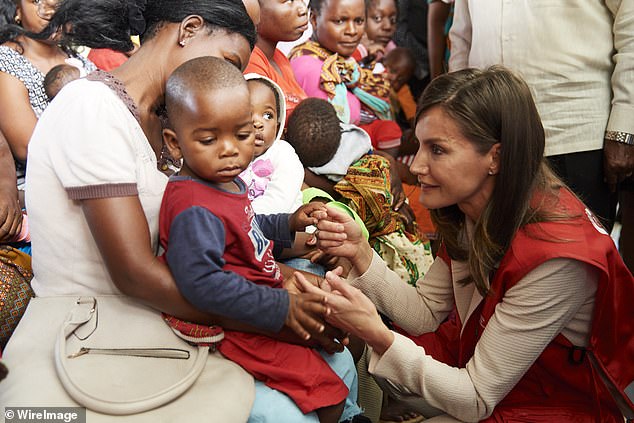 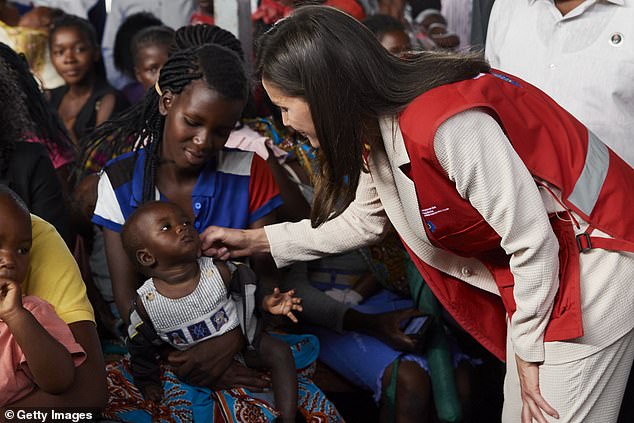 Crowds gathered to meet the Queen, with many holding children which the royal couldn’t help but stroke 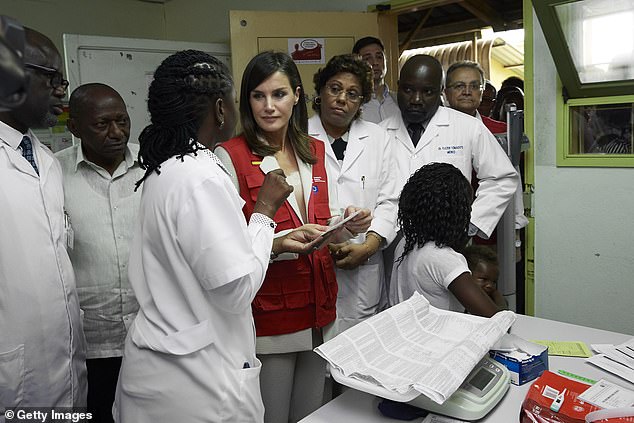